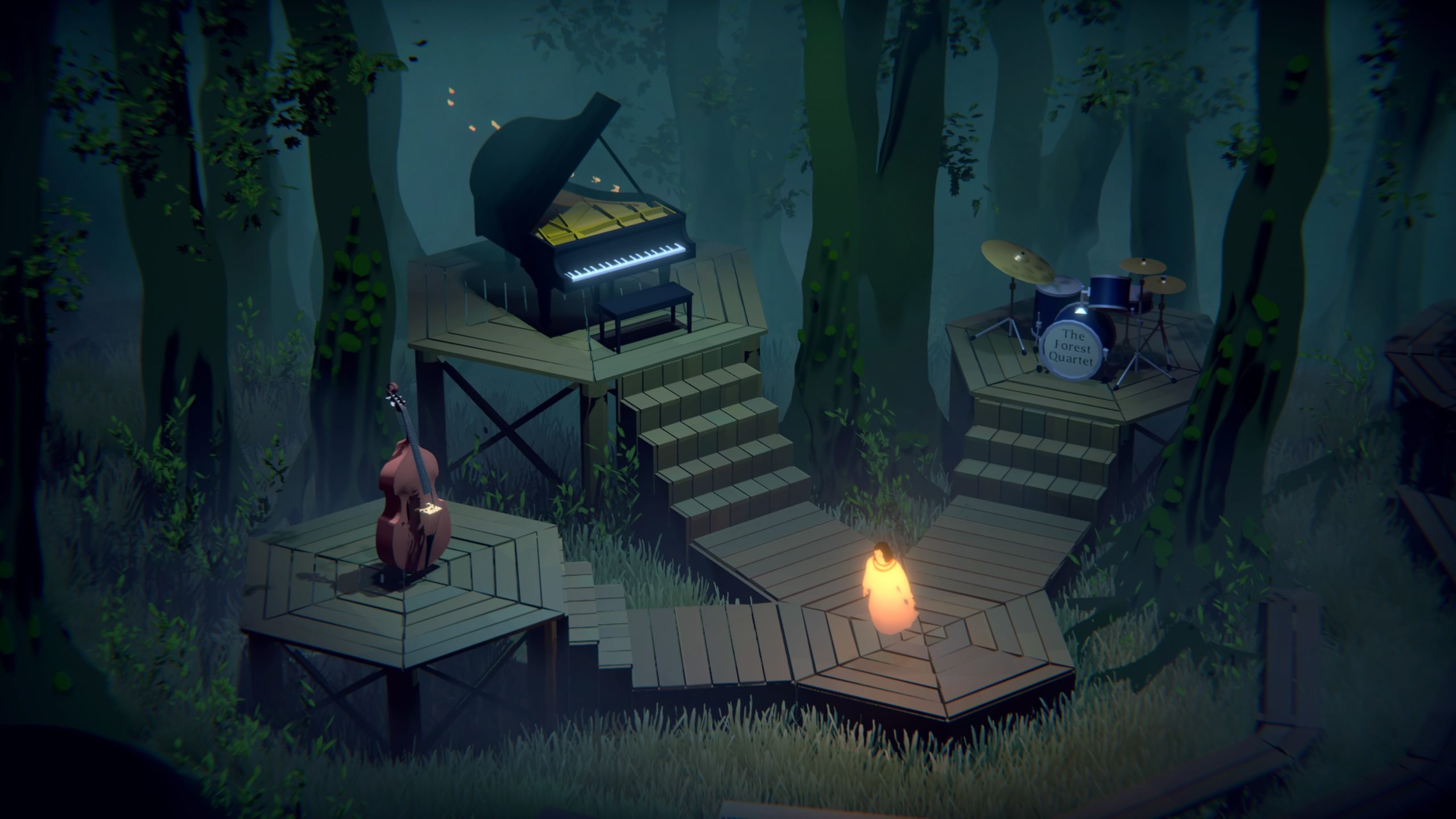 A short but personal and charming adventure, The Forest Quartet is about visiting your band mates after recently passing on. The Finger Guns Review.

We often talk about the “soundtrack to our lives”. Music often plays an important part in those important moments in life, providing a backdrop or setting a tone. For the characters in The Forest Quartet, a 4-piece jazz band that lives deep within a forest, that soundtrack was beautiful music they made together. Unfortunately, that has now come to an end. The lead singer and saxophonist Nina has died from a mysterious illness. Her death won’t prevent Nina influencing her bandmate’s lives however. Even from beyond the grave, the player controlled character will be offering some assistance while forming the soundtrack to her death.

Till Death Do We Party

In The Forest Quartet, you control the translucent visage of the recently deceased Nina. Floating up from the ground, the spectral saxophonist wakes up from her longest nap on the eve of her band’s farewell gig. There’s an issue however. Struggling with the grief of losing their 4th, the other band members have succumb to some of their more destructive personality traits that they usually keep buried. From beyond the veil of death, Nina is going to attempt to help them so that they might play on.

The world that Nina moves through is representative of the real world she lived in, but is tinged with spooky, odd aspects. For every section of forest that look realistic, there’s another section of the world covered in reactive grey goop or blazing with unnatural fire. There’s symbolism throughout The Forest Quartet, just beneath the surface and easily understandable. I won’t spoil it here, but there’s an impressive amount of creativity that blends those real world feelings people have while mourning someone with the art direction of this game.

The story and the relationship of Nina and her band is central to The Forest Quartet, so I won’t spoil it any more than I already have. This tale is about 2 hours long with a linear narrative path and a single ending. It’s intentionally so. The story feels incredibly personal here, centred around this group of musicians, there self awareness of their flaws and how they struggle to keep them in check. Anyone who has ever lost someone will likely find something to relate too here. Even if you don’t live in a deep, dark forest.

The story of The Forest Quartet dovetails nicely into its game play mechanics: the issues Nina’s friends are feeling manifest in obstacles that she’ll have to overcome. There’s very little tutelage in this game, with puzzles tasking you with figuring out what you need to do before you do it. That involves at least a little trial and error. Thankfully, most of the puzzles are tweaks on head scratchers you’ll find often in video gaming, so they’re all easy to intuit.

The most challenging that The Forest Quartet gets is remembering a pattern that’s shown to you in one location, then replicating it using one of the puzzle mechanics in another. Otherwise, you’ll be exploring, picking up objects to place elsewhere and using a glowing power to activate otherworldly machinery.

There’s only one section of the game that I feel like could have been tightened up. At one point, Nina is tasked with flying from platform to platform in a very dark location. While much of the game feels smart and well designed, this section stood out as feeling weaker than the rest.

There’s a steady culmination of game play mechanics in The Forest Quartet. Each of the game’s first three chapters focuses on a particular puzzle system before they all blend together in the final quarter of the game. Each chapter has its own difficulty curve, gradually introducing new aspects until making them more complex. The challenge here, being light and intuitive, gives the game a fair pace, allowing the story beats to land quickly. The way the game is crafted allows that story to shine.

Music To Die For

Throughout The Forest Quartet, there are moments that give it a real human feel. Snippets of a candid interview of the band get played at various junctures, for example. I couldn’t tell you whether this interview is a real interview that was spliced into the game or some excellent voice acting; it’s that damn good. The music and other sound effects are incredible too, forming a world you’re happy to spend time in.

To be honest, the whole experience feels personal to the developer. It’s easy to imagine this game being about real people with real issues, the characters just feel ‘lived in’. Despite this, the game doesn’t feel like it was developed for an audience of one, which can sometimes happen with these passion pieces.

The entire game crescendos into a truly touching moment that to describe would be to ruin. Instead, I’ll say this: If you like quirky narratives and original experiences, The Forest Quartet is a game to look into. It’s only a few hours long, so it can be completed easily in an evening, and that time will fly by. The puzzles might feel familiar and there’s one short section that’s a dud, but the rest of this game is poignant and beautiful.

A succinct, poignant and personal narrative puzzle game, The Forest Quartet is an excellent way to spend an evening. Its intimate story is brought to life through an art style packed with symbolism and gorgeous music. There are a few foibles with the game, but they account for just a fraction of the overall experience.