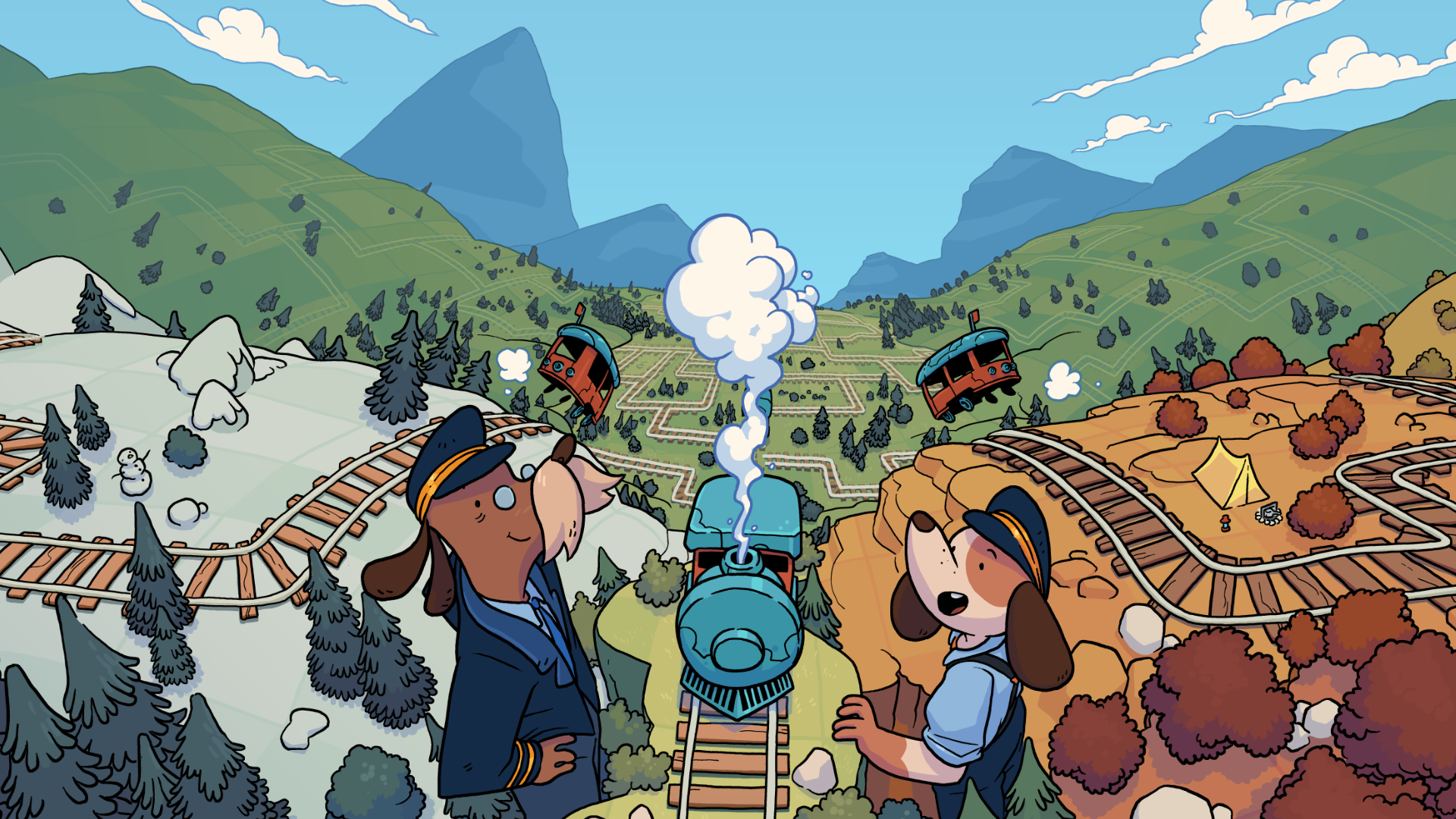 Travel the world by train with two dogs in the charming puzzler Railbound. But is it sitting in First Class? The Finger Guns review:

From the makers of Golf Peaks and Inbento – It’s third time on the track in Afrterburn’s carriage with Railbound. This game reviewed exceptionally well on the Mobile/PC version after the release earlier this year. So, a port to Switch seems like the logical next step as indies seem to thrive on the platform. Afterburn have kept it consistent with Railbound, as it’s another cosy puzzler that can both warm your heart whilst setting a fire in your brain.

There is a simple brilliance to Railbound’s puzzle solving that I don’t think my brain will ever figure out. The basics of the game has you placing down pieces of railroad tracks for carriages to make it to the head of the train. The carriages are numbered and the puzzle is solved by arranging the carriages in the correct numerical order. In the placement of tracks you can link them together forming bends for the carriage to turn. If the bend isn’t the right way you can flip it forming an orderly line to the objective.

New train inspired mechanics get added as you progress. Tunnels and gates that are opened by the triggering of buttons are amongst other additions that keep you on your toes throughout the game. They’re all meticulously placed leaving no room for a varied solution. There’s always one right path and for that I’m in two minds. In one aspect, as a puzzler there should always be one solution, as is the nature. However, I never found those eureka moments when trying to visualise the answer. Usually the more I play a game the better I can imagine how to beat the stage before actually executing – give or take a few minutes to think. But for Railbound, it never clicked.

That’s not to say I didn’t have fun, because I definitely did. But every level was met with frustration and I rarely felt like I was smart when beating the stage. Instead it was often the case of exhausting every other variation via trial and error to brute force success. Like I said, I don’t think this is a discredit to the game, rather an issue on me on not getting along with the mechanics of the puzzle. If you like a challenge that’s varied and progressive, Railbound is for you.

Railbound’s story is told through postcards you collect as you complete levels. They’re beautifully created in a hand drawn style and they all evoke emotion. They depict every location the dog conductors visit that are connected with the design of the levels. I really looked forward to unlocking a new one every time. However, this is probably the smallest portion of the game and for me, there were not enough dogs! On the basis of the cover art I was expecting more cutesy dog dialogue or customisable features. Of course, pictures, or a postcard tell a thousand words but some additional cut scenes wouldn’t have gone a miss. But it does leave a lot more room for the gameplay to be the focus, and rightfully so.

As testament to this straightforward approach to gameplay there isn’t even a main menu screen; as you boot up you’re thrown straight into the first level with subtle signposting that walks you through the basics of the game. Outside of the levels you’re greeted with a map that links all the stages together. You can navigate across the levels and pressing the right stick down loads up the credits and the ‘+’ button allows you to change the settings. It has the usual display, audio and language settings but the most welcome addition is the accessibility.

Options to enable the Rumble Feature, Colour Blind Assist, Focus Mode are all great additions. However, the exceptionally helpful options are the ability to enable Hints and even unlock all the levels. Unlocking all the levels for those who are stuck and just want to move on or pick and choose what to play, relieves any pressure and adds to the relaxing nature the game presents. As well as hints being so helpful whilst not holding your hand through the level so you still think it’s you that’s completed it. The hint system shows you one or two pieces of track that should be placed on the map, cutting out a chunk of variations that would be wrong.

There are over 150 impressive levels in Railbound. Outside of the tutorial stage the levels ramp up in difficulty quite significantly. Alongside of the mains stages, there are connecting side stages that are on the harder scale compared to the mainline levels. After you’ve beaten the game, the Switch version has a new level with a few more stages that are more of a free form way of completing. You get plenty of track pieces to play around with and it’s a really great way to experiment, it’s a shame you only get it at the end – if you don’t unlock all the levels you miss out on a great way to practice from the get-go.

The levels are simplistically designed with the surrounding areas giving you a sense of where you are without doing too much. Forests, snowy hills or by the seaside; every level has a cosy colour palette whilst never taking any focus off the puzzle at hand. The clicks and delete sounds come off in a very ASMR way. In the right setting if you don’t let the puzzles get the better of you, this is a really peaceful game. The tranquillity is bolstered with a piano lead melody with some light horns that adds depth to the charming presentation it so well executes.

Railbound feels like a perfect game for in between games. That’s not a reductive statement as I feel the true intentions is to play this every so often, taking it at your own pace. Maybe a couple of stages on your daily commute, or a few to wind down with before bed. The whole package feels designed to stimulate the brain without many frills attached – enabling the gameplay to speak for itself. The accessibility features are well thought out making it a fair challenge for anyone which I really commend Afterburn for.

Railbound is a quaint, confident and colourful puzzle game that’ll charm your socks off if you let it. The presentation is welcoming, while the puzzles are challenging, all chocking up to a well-designed puzzler that’ll keep your brain boggling for hours.

Railbound is out now on Switch (review platform), Mobile and PC (Steam)