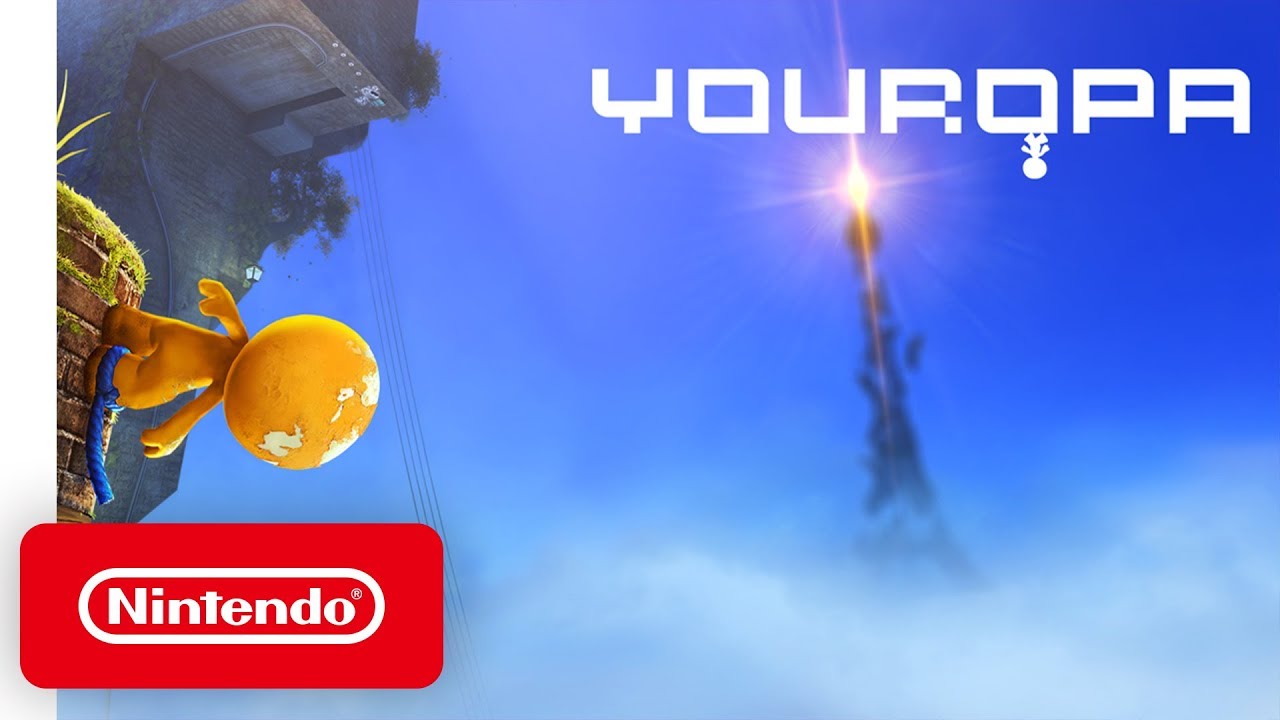 Youropa is a puzzle platformer that defies the rules of gravity. The Finger Guns review:

Puzzle games are an interesting genre that can be made up of so many different mechanics and tools. In such a packed genre, it takes real ingenuity to come out above the rest. And yet, added complexity can be a game’s greatest rise or downfall in someone’s eyes. I think when you review games, you have to be honest with yourself and those that read them. It’s not only important to get your opinion across, but also to enable the reader to see the game from those who may have liked similar games, or who love the genre. For me, Youropa was not it. It was so ‘not it’ that I put off writing this review for more days than I care to mention. That doesn’t mean I can’t see how it may be someone’s cup of tea, however. Let’s actually get into it.

In Youropa, a structure similar to the Eiffel tower immediately collapses and disintegrates in front of your eyes. There are tiny platforms in the atmosphere that are close to one another but not entirely connected. Your character is hung from a tree upside down. This is how your adventure begins.

You and the platform in which you stand are clearly elevated above the ground’s surface. After passing through an illuminated door, you come to another little platform. There are many of these platforms all surrounding you. These platforms are discreetly connected via wires. One level’s wires will power another level and so on and so forth. It is your mission to power all the wires, opening all the doors to the levels.

The best way I can describe the mechanics of Youropa is to compare it to Sonic Adventure 2. Specifically the level called ‘Crazy Gadget’, right at the end, where Sonic is in space. Sonic is platforming among many different sides of a surface, but has to press buttons to change the gravitational pull to be able to actually travel along that surface. Should he not press the right button and you jump off your platform, you are sucked into space forever.  That premise? That’s Youropa. I can’t say I was a massive fan of that level, so I guess it won’t take a genius to predict where this may be going.

With Youropa however, there is no button to change your gravitational pull, it simply is by traversing along different paths which eventually change your field of view and perspective. However, the same rule remains, get caught on a step, or some sort of platform you think you can move onto, you’ll end up in the abyss forever more.

Okay, that is not completely true. You do respawn, just less colourful. There are collectibles on each platform, depending on what angle you will explore or can explore. These collectibles are usually art that you can customise your character with. When you fall off the platform into the abyss, some of the design will clear and you will have a white head, but a decorated body. If you fall off enough times, then you will restart the level. For me, at times it was not completely clear where levels start and end, but I am assuming that’s on purpose to add to the immersion. This is one big, separated platforming city. I do feel like the paint mechanic could have been elevated a lot, as I found myself not really bothering when it was offered. It was fun at first, but feels more of a side dish than part of the main event.

There is an ‘overview button’ to be able to zoom out and look at your platform at every angle. This is to make sense of or perhaps guide you where your next switch or collectible is, but also for any clues that might turn on the power. In some levels there were light up platforms and windows that would suggest the order the lighted floor needed to be in to open. It was at times so subtle, it felt painful. This was also really annoying to control, and whether that was linked to it being the control elements on the Switch I am not sure.

You’re On Your Own, Kid

Youropa really took some time to understand. There isn’t a huge lot of signposting going on, or explaining even at the very beginning of the game. Do not get me wrong, it is very clever when you do eventually figure it out, but I personally felt like that took away from the enjoyment especially in the early stages.

Later, I found myself chasing my own tail, going around in circles, and just not knowing what the hell to do, or where to go with it. Sometimes it’s fun to get lost in the experience. This for me was not fun. I constantly restarted levels because I couldn’t be bothered to keep going back on myself. As everything is so broken up, its difficult to keep track of if there is actually anything left to do in that area. There was at one point, I turned on the power, followed the light, which then resulted in me being in the same area I was in previous to the area I turned on the light. Great, so this must mean whatever is next is in here right? Well beats me, because this tiny platform was the size of a Rubix cube and there was nothing left to press or touch.

There is no room for laziness either. If you feel you need to be at a certain angle, because you found something, you’ll either have to follow your path through and hope you end up in that perspective or go back on yourself and try and tackle your new found path from a different way. Stepping down, or off the ledge will likely fly you off the whole platform. I eventually lost sight of the whole thing and I didn’t really care about where this dude ended up. There are small hints in the form of your character in a standstill on certain corners of the level, but apart from that, you’re on your own kid.

Enemies soon come into the playing field, and there are slight fun moments where you can lead them off to the platform to never bug you again. Mostly, you are just being chased by them or will need to run quickly so you are not belly bounced off of your route. They have an awareness metre that will fill, and once that box fills, they will chase you down. If you can get out of eyeline quick enough, you can save yourself a bit of trouble.

Concrete Jungle Where Dreams are Made?

I can objectively see how this is a very clever idea for a puzzle game. I can see how someone can really get their teeth into figuring this out and getting satisfaction when they do. Everything is interchangeable and can be manipulated or walked on in some way. Which is really fantastic when you think about it, but for me, it just added more layers of a cheesecake I did not want to eat.

The main highlight for me was the look. There was something quite attractive about the design and art concept of Youropa. There’s a real concrete jungle vibe to Youropa and many of your small platforms look like abandoned skate parks, or the edges of pretty parks. The sky and atmosphere around you is very pretty and the sky changes its colour palette as you get deeper in the game from sunset rays to cloudier days.

I also had no hitches along the way, no crashes or bugs. There is very subtle music, but this is a game fully concentrated to that of the puzzle ahead and so mostly consists of sound effects.

As this game does dive straight in, the game’s runtime is not typically massive and if done succinctly, if you are not too bothered about collectibles, could likely be done in a few hours. For those players who want a ‘no fluff’ approach to puzzle games – No story, no fandangled music, no cut scenes, just pure puzzling – This is for you. You will likely enjoy this. I didn’t, but I can see how others would enjoy this experience all the same.

Youropa is a puzzle platformer with a unique, gravity defying twist – but it’s not quite enough. You could easily find yourself getting lost in the pleasant atmosphere, but you’re just as likely to enter a void of chasing your own tail.

Youropa is out now on Nintendo Switch (review platform), and PC via Steam