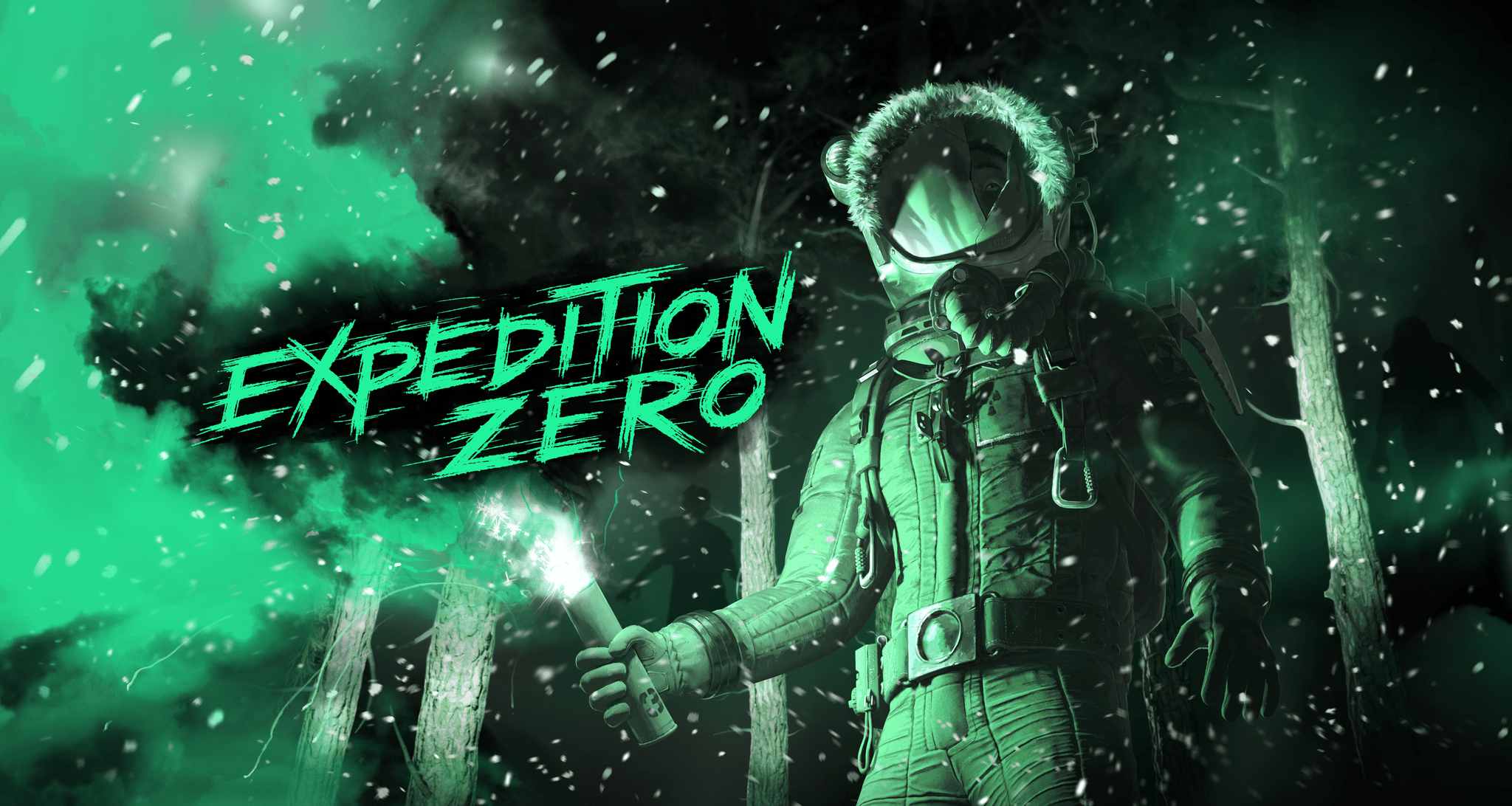 Every now and then you come across a game that sets a really great first impression, only to disappoint you in the most egregious fashion. Like a falcon soaring into the air to realise it has forgotten how to fly, Expedition Zero is one those titles.

A survival horror game by label, it turns into more of a survival only title, but with some horror themes that are utterly dismantled by turgid gameplay systems and a disappointingly non-existent plot. There are a couple of highlights that shine through, most notably its atmosphere and world building, but everything that involves playing Expedition Zero feels uninspired, insipid and a poor use of your time.

Opening salvo delivered! If that hasn’t been enough to put you off, let’s set off on this expedition of disappointment and explore why.

Expedition Zero begins much like any other survival game, in that you wake up in the middle of nowhere, with no idea what you’re doing there. In this case, it’s a snowy forest landscape that’s prone to vision impairing storms and rather chilly rain showers. In contrast to the opening of this review, Expedition’s Zero’s first hour does an excellent job drawing you in.

You set up a basic shelter, get to grips with finding a bed to sleep in to save, restoring health, interacting with items and environmental loot. Receiving a cryptic message from… someone… you head out to your first mini area of the game to be given your first assignment. You’re charged with eradicating sources of infection spread throughout the area before you’ll be given permission to leave the quarantined walls you find yourself confined in. Fair enough, makes sense.

Reaching the forest for the first time, you’ll wander out into the snow-capped wastes of a deserted forest complete with mangled researchers, creepy zombies, an impressively eerie atmosphere of foreboding and things that can dash about the tree line out of your view. So far, it’s brilliant. I’m on edge, I’m tense, I’m wondering what comes next. I find a weapon, but don’t even use it for the first hour… this is awesome tension building, I love it.

Like all great Jenga matches however, it has to, inevitably, come crashing down.

The Long Climb To Nowhere

Immediately after your first hour, you’ll quickly realise Expedition Zero has played every card it has. In total, there are two enemy varieties – a shambling melee zombie and the aforementioned tree dashing shadow thing. The latter of which you’ll only fight in the forest. Combat is slow, labourious and unintuitive, as each enemy takes at least 5-6 hits to down, compounded by how the move quicker than you and your reload speed makes WWI reload times blush.

I actually found myself just running past enemies or better yet, saving and reloading towards the end as this would straight up despawn them. How enemy spawns are impacted by reloading your save is sketchy to say the least, with objectives respawning (yet still completed) and enemies either being re or despawned depending on what it feels like. Your objectives boil down to run here, hold a button for 2 seconds to clear infection or interact with button, move on and rinse repeat for 4 hours.

However, this is a survival game, so it’s not as easy as beelining it straight for the objective… at first. You acquire a signal tracker that’ll let you know how close an infection spot is within 150m, but you still have to venture out into the elements. To do this, you’ll need warming equipment to survive the cold, a gas mask to survive gas clouds (duh) and components to fix up fires or energy chargers (unless you want your light to go out in the middle of a blacked-out forest).

Face The Elements… Or Not

Crafting is therefore supposedly a big part of making it through Expedition Zero, but again it falls flat. At various locations in the forest (and later mini levels) you’ll find printers, which will manufacture equipment or items you require. A bigger backpack goes a long way to aiding your progress.

In order to craft you pick up as much junk as you can around the world, which you can then convert into metals, plastics or electronics. Given that your light will run out without power or your temperature meter will deplete quickly without said equipment, there’s a certain satisfaction to hoovering up enough stuff to make your life that little bit easier.

What this also does, is smash the pacing of an already very short game into a crawl. You spend more time holding a button on a TV than you do actually fighting or exploring (though given the tedium of the combat maybe that’s a mercy), while your inventory management screen is clunky and unintuitive, as you have to manually drag over every piece of junk to be converted instead of what every other game in existence does by having a button that does all of that for you.

Light and temperature meters also deplete ridiculously fast before (and after to be honest) you get upgrades, so a lot of your time is spent waddling back and worth to places to charge or heat back up instead of solving the mystery of the infection or, well, actually doing anything. Look, I know I’m no survival game extraordinaire but Green Hell did all of this, and so much more, so much better already and I loved that game, because mechanically it was sound.

Unfortunately, Expedition Zero is not sound, at all.

Can You See The Trees From The Forest?

In the end, I heavily disliked almost every element of this game. The combat is ancient and uninspired, the exploration is completely undermined by survival elements that are easy-yet-tedious and the game itself just loses all of its initial momentum far too quickly.

There are 3 mini-levels you travel to separate to the main forest area (which is actually quite large), but these are all uninspired locations and are woefully short. A farmhouse, a school and one I’ve forgotten it was so uneventful. Again, you complete a small series of boring objectives traipsing around these tiny locales to get rid of a spot of infection and then immediately go back.

You might have noticed I haven’t mentioned story virtually at all yet and there’s a good reason for that: there ain’t any, really. There are exposition notes scattered around each locale, but after the first handful I stopped bothering as the narrative for what’s going on is as bland as dry toast. The couple of NPCs you come across don’t say anything much of value and your character is an FPS mute, so there’s very little to hook your climbing utensil into.

I will say that the forest and snowy locations look great. There’s atmosphere everywhere with suffocating darkness, blinding snowstorms and perfect use of occasional lighting and environmental details to guide your way. Unlike other titles, Expedition Zero benefits from having little-to-no musical score, as it elevates each cracking piece of wood or unseen noise into a tense game with your ears. Until one of the zombies T-posed and decimated all of that immersion. See for yourself:

I’ll happily admit that much of my animosity that’s probably come out while writing this review stems from my utter disappointment with how Expedition Zero turned out when the opening hour had me so excited. The brooding tension and sense of dread completely washed away by shallow survival mechanics, skippable combat and a lackluster narrative hook.

In another universe, there’s a version of this game that hits the peak of survival and horror merged games. The location design and environmental work is genuinely excellent, while the ideas of its survival gameplay have some inherent merit. The problem however, is that it’s all squandered when it becomes clear how plain bloody boring it all is. By the end, I just didn’t care. The credits rolled and I deleted immediately, abject and deflated.

I’d find it hard to recommend anyone really play it unless you’re the masochistic type that loves messy, broken and uninteresting concept games that could have been great but aren’t. I will give credit to the development team who have done a helluva lot of work on it since release patching bugs and adding new pieces of content, but the fundamental shame of it is that their work now can’t fix what’s a shallow and boring video game.

Expedition Zero hooks you in with its first hour of tense atmosphere and excellent world design, only to fling you away with horrendous combat, counter-intuitive survival & exploration mechanics, and a barebones story. This expedition simply isn’t worth embarking on, but maybe one day there’ll be an adventure worth going on.