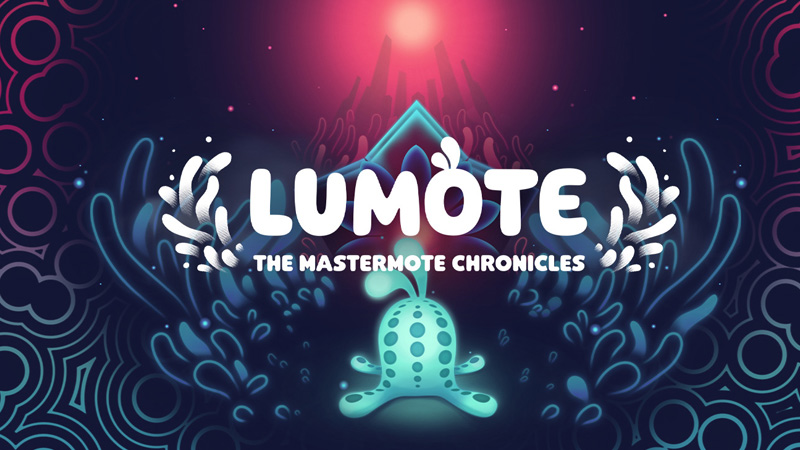 Lumote: The Mastermote Chronicles is the squishy puzzle platformer you may want to squish your way into! The Finger Guns Review.

A puzzle platformer full of bioluminescence squishy cuteness and platformer puzzles ’till you drop – literally. The Finger Guns review.

As any gamer may relate, my experience with starting a new game is always quite exciting. I feel an nervous excited energy in wondering what enjoyment will come from whatever new adventure I’m diving into. As a player, You potentially have no idea you’re about to dive into what will be your new favourite game. I tend to have a cognitive dissonance about this, forgetting that I could almost be diving into a game that I wish I didn’t. Lumote really didn’t give me an opportunity to even ponder this as it dives straight into level one with barely a title screen.

When I say ‘level one’ I guess this is quite misleading, for Lumote offers the whole world before your eyes. The player starts in almost what I can only imagine is what the Matrix would look like without all the numbers. Lumote’s environment is one of bioluminescence blues and reds. Visually the game is striking with the bright colors and different elements of chemical reactions of colours everywhere against a darkened backdrop. As previously mentioned, the player can spy everything they will encounter within Lumote. As you pan around and down below, every platform is reddened awaiting Lumote to restore their world to balance again.

Meet Lumote, a squishy jellyfish looking creature who squeegee’s around platforms with your control. Don’t get me wrong, they are very cute making adorable noises throughout the puzzle play. They’ll keep you entertained for a while but there’s no real indication of why or how they got to where they are.

Lumote: The Mastermote Chronicles dives right in. No tutorial, no story, just you, Lumote and the obstacle in front of you. Every ‘puzzle’ is on vertical planes that are suspended in a void and each puzzle section’s aim is to turn the reddened structure blue. Do not pass go, do not collect 200 pounds until you have done so. Once the structure Lumote is working on activates, they will be able to travel to the next section through a beautiful flower acting as the stopgap between your current task and seamlessly allowing you to work on your next one. This flower has roots like any other flower but in Lumote the roots will lead to platforms which inhabit creatures called motes, these must be placed on the root ends.

Lumotes job is to possess and carry these motes on the root ends but in order to do this players will need to overcome logistical and cleverly designed puzzles. For example, it may be that you will have to activate a root which may set in motion movable platforms to recover other inhabitants to your original starting position. As you go on, height, speed, moveable platforms and lasers are all part of the hindrances (or aids) in order to help Lumote light up and continue on the adventure. The motes can help or hinder your progress and it can be tricky to figure out what exactly it is doing with each component of the puzzle.

Although you can see every level ahead or below you, these are split up by towers. Multiple smaller sections are concluded with Lumote needing to possess the ‘Mastermote’ and lighting up the tower. The ‘Mastermote’ is a large structure that you will slowly direct to it’s final destination allowing the tower to light up and Lumote to progress onto the next set of puzzles.

There is something to appreciate in Lumote: The Mastermote Chronicles as you’re able to see the amount of puzzles ahead of you from the start of the game. Anyone looking for a challenge will certainly get that with this platformer. However, something apparent very quickly is the repetitive nature of elements such as the mechanics or environment. The whole game is black, blue and red with a dash of green every so often and it can make the experience feel stagnant at times. I’ve certainly encountered puzzle platformers with much more depth whether that be a story, or just the environment the puzzles you come up against are in.

Anothing thing that really didn’t make too much sense to me was the lack of direction. I don’t mean this in like a where to go nuance either. I mean this in a nuanced “if everything looks the same, is in one area, on one floored vertical platform and you keep changing the rules and adding things, how is anyone supposed to intuitively figure out what everything does”. There were times where it is actually very entertaining to figure out a certain rule or directive of how a puzzle plays out or interacts with the section you are on. That is literally the point of any puzzle game. It isn’t supposed to be handed to you. It just felt that the further I progressed on each section the more time you spent undoing and re-doing a lot of elements of the level to get to the end.

This motion of doing and undoing for some time started to trickle away the enjoyment I was getting from figuring out the ‘rules’ of certain things and progressing. There were times I would jump back in and it would feel like all the rules would change and I literally wouldn’t be able to figure out what something did or didn’t do. This just led to me arbitrarily moving every element bit by bit until something clicked. This makes it sound like I am asking for the game to hand me the ‘wins’ of the puzzle, but it was more that my wins were not living up to the frustrating amount of time I would spend trying to remember what everything did and what influenced what element and how to do it to make it worth wanting to progress onwards.

Adding to this, there were times where I would feel on the precipice of cracking a length and tricky section, only to ‘die’ by being squished between something that my own Lumote activated and having to start all over again. Lumote’s ability can sometimes allow it to move platforms just by simply walking over it. It can also do the opposite in that if you land or walk over something the platform retracts or descends. If this happens, and Lumote gets squashed or falls off the platform, you’ll start from the very beginning of the puzzle.

The gameplay runs for a few hours so theres plenty of puzzlin’ to be getting on with. Lumote does also integate the platformer element within the puzzles. There are lots of little objects in the crevices of the planes. It’s really up to the player (or depends when they spot them) how they go about collecting these as these will take precision and timing. It feels as if this could have been more of a nightmare than it actually was, given the size and squishyness of Lumote. If you take your time and jump at the right in the right direction you’ll likely be able to succeed.

In my short time of being here at Finger Guns my roster in my first year is mostly made up of the odd puzzle game. I quite dig them! Whether that be Puzzle Adventure, such as A Jugglers Tale, Puzzle Platformers (Out of Line) or the weird and wonderful such as One Hand Clapping to name a few. I like to think that I am pretty fair with a good eye when it comes to them. So saying that, I can wholeheartedly see how this may be perfect for someone who just wants to sink their teeth into a puzzle game with no other expectations, wants or desires from the game; It does the job on the tin. However for me, although very eye catching and adorable, it became a bit boring quite quickly and didn’t quite hit the mark.

Lumote: The Mastermote Chronicles is adorable with clever logical puzzles that may appeal to the masses who love a good puzzler. Despite being filled with Bioluminescent beauty though, the lack of direction and repetitive environment holds it back from being anything more than ordinary.