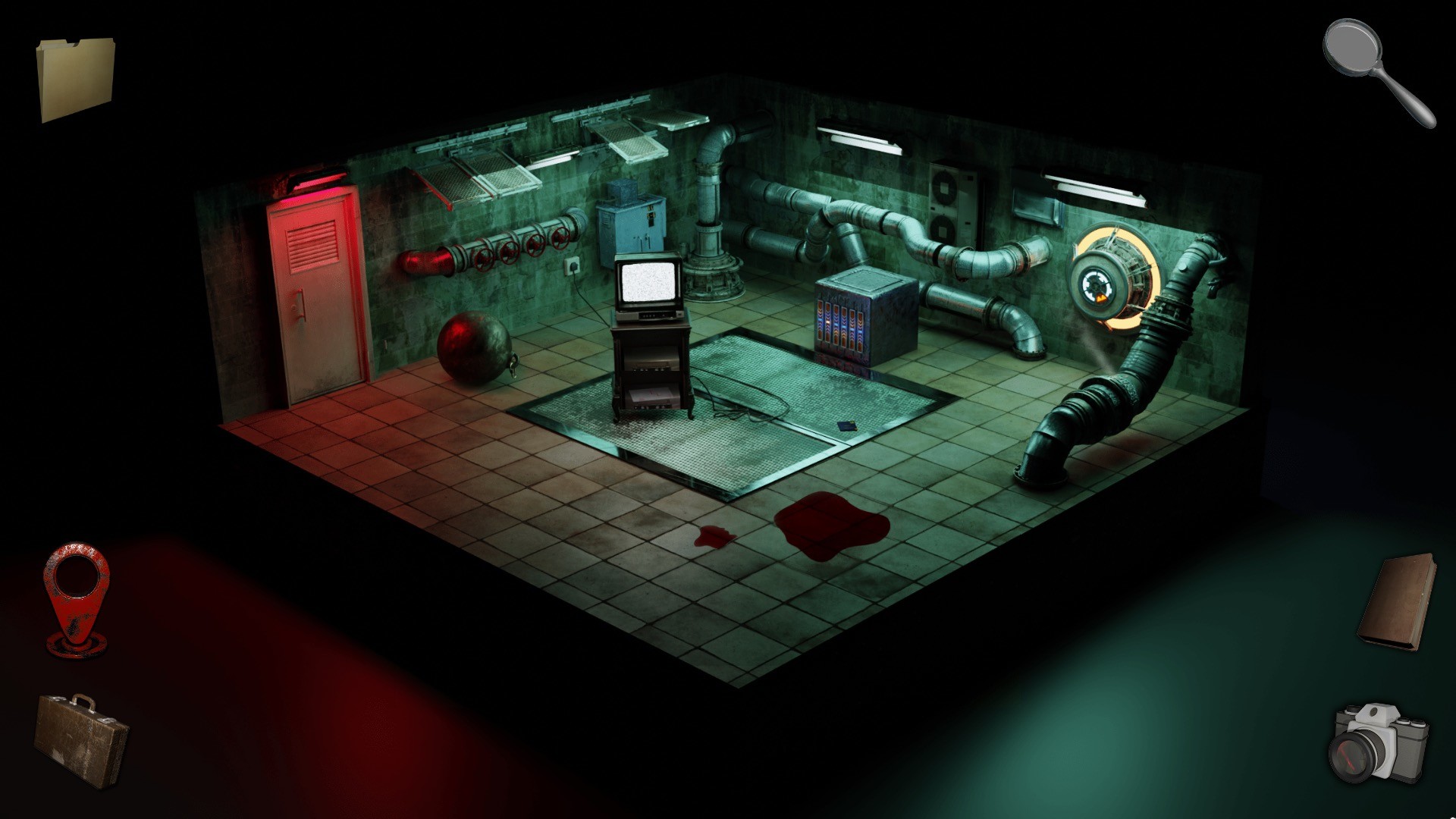 A first person point and click adventure, Another Tomorrow is reminiscent of the classics but runs out of steam before the credits roll. The Finger Guns Review.

A first person point and click adventure, Another Tomorrow is reminiscent of the classics but runs out of steam before the credits roll. The Finger Guns Review.

Whenever I’m reviewing a game, I like to take notes to make sure I don’t forget anything I want to mention. I imagine a lot of critics do this. I keep a note pad next to me so that if something of note happens, positive or negative, I can jot it down. For Another Tomorrow [Steam], I covered 5 pages of this book in notes. Most of these weren’t to do with the quality of the game. They were to assist in solving the complex web of puzzles that this latest point and click adventure from Glitch Games (The Forgotten Room, Great Escapes) poses to the player. Scribbled symbols, lines of codes, lists of rooms and what’s in them. By the end of the game, my note pad looked like the Charlie Kelly conspiracy board meme. Reminiscent of the first person point and click classics, Another Tomorrow regularly reminded me of the days when we’d have to use a code wheel just to play a game (remember those? just me?) in the best way. It’s just a shame that that’s not consistent throughout.

The protagonist of Another Tomorrow wakes up on the floor next to a large pool of blood. He doesn’t recognise where he is or how he got there. He doesn’t even remember who he is. The insinuation here is obvious – you’ve been taken, beaten and left in a locked room. For what reason? And by whom? I guess it’s time to find out. This opening trope might feel a little tired, but its intentional so that make much of the rest of the story (which I won’t spoil here) land.

Another Tomorrow is primarily played from an elevated viewpoint which looks down upon locations in which you’ll have to explore. These mostly static and lifeless diorama-esque locations each act as their own puzzle box. Using the cursor you can find points of interest, enter doors to find new locations or pick up things. When you do click on something, you’ll enter a first person view point to get a better look.

The game features a series of unique locations, each of which you’ll unlock in turn. The grimy tunnels you find yourself at the start of the game lead to a bridge where it’s obvious that some kind of accident has taken place. Later you’ll be visiting a bar, an apartment block, a swanky apartment, a motel and more. At each location you’ll be solving a plethora of peculiar puzzles.

There’s no handholding in Another Tomorrow. There doesn’t need to be any either. Despite the intricacy to the lattice of headscratchers here, everything you need to be able to solve them is in the game and is self explanatory. The first part of every puzzle is working out what you’re actually supposed to solve. You’ll see chess boards with an unfinished game on it close to a locked box with a chess piece based combination lock. It’s obvious that the two are related – But how? Graffiti dotted around some areas will give you clear instructions but they’re all a little deeper than they first appear. That sentence painted on a wall? It’s not just there to set a scene. You might need to take it literally. It’s all very well put together, driving the player to analyse ever aspect of the screen in relation to everything else.

Many of the puzzles in Another Tomorrow involve finding long codes or combinations in one location and inputting them in another. This is where the game’s trusty camera comes in handy. After picking it up in the first room of the game, you can click the camera icon at any time. This captures an image from the screen and adds it to a scrapbook which can be called upon at any time. You can even draw on these images within the game to add your own notes, then display them on the screen during like a pop out window. This is incredibly useful but not quite as immediate as I would have liked it – hence the dozens of lines of symbols and codes made in my notepad.

If you get really stuck – I got completely stumped three times – then this game has a hint system to help you progress. These hints come in a logical, numbered order which give you a guiding hand or will outright solve a puzzle for you if you want them too. A hint can be something as simple as “Take a photo of X pattern” which can put some importance on something you thought insignificant. Some hints even come alongside spoiler images that outline what you’ve got to do to solve a puzzle. It’s a robust system here that alleviates some of the frustrations that come from the complexity of the puzzles.

There’s a quirky, abstract nature to many of the puzzles in Another Tomorrow too. Parts of the game remind me of the puzzles in the original Resident Evil, like a security system that’s so overtly elaborate that it can’t possibly be efficient or useful. Unlike Resident Evil though, the context delivered by the story allows for the this weird edge to everything.

The story in Another Tomorrow progresses at a slow burn. After a rapid set up, little nuggets of narrative are drip fed during each chapter and eventually come to a conclusion at its end point 7-8 hours later. Long before the big reveal at the end of the game, you’ll likely have a decent idea of what’s going on so it won’t be a surprise reveal. Still, the epilogue puts a nice little bow on the story, wrapping it all up while justifying the aforementioned quirkiness to the puzzles.

After you’ve completed around three quarters of the game, the story becomes the primary motivating factor to finish Another Tomorrow. That’s because the puzzles themselves start to lose a little of their veneer. The puzzle complexity is highest a few areas before the end point and after that, they start to feel a little dialled in.

That’s coupled with a reduced level of interactivity. During most of the game, the protagonist will describe an item when the cursor is pointed at it and it is clicked. Towards the end of the game, you’ll find a number of items don’t trigger a response. Clicking to look at an object, even though there’s a prompt at the top of the screen, doesn’t generate a description. You could feel the game slowly run out of steam the longer you play. There’s even one moment when the game says “It’s just the bathroom with nothing of interest. I guess the designers of the house got a bit tired at this point“.

That last comment is all part of a fourth wall shattering tone that resonates throughout Another Tomorrow. There’s lots of nudges and winks throughout this game to other titles from developers Glitch Games and there’s even a picture of the developers on the front of a magazine. Descriptions of items are often directed towards the player rather than the game’s protagonist too. This often makes for a light-hearted environment to puzzle around in.

That vibe is matched by the art employed throughout. The visuals, either from the diorama-like view or in first person, are detailed, clean and enticing. Some scenes have an almost twee feel to them while others have confounding machines in them that feel sci-fi in origin. Despite the game visiting numerous different locations, the art style feels aligned throughout, even if its an ancient temple or a mysterious science lab.

While the music in Another Tomorrow is pleasant enough, I would have enjoyed much more variety to it. The same tune replays through much of the game and while it’s a great track, it can start to grate. The few lines of dialogue that are spoken by voice actors are convincing and well performed.

While it might lose its lustre towards the end, Another Tomorrow is an otherwise well crafted and challenging first person point and click adventure that’ll appeal to long time fans of the genre. A great hint system helps avoid any frustrating hold ups while still allowing you to discover those important ‘eureka’ moments on your own.

Another Tomorrow is available now on PC via Steam.