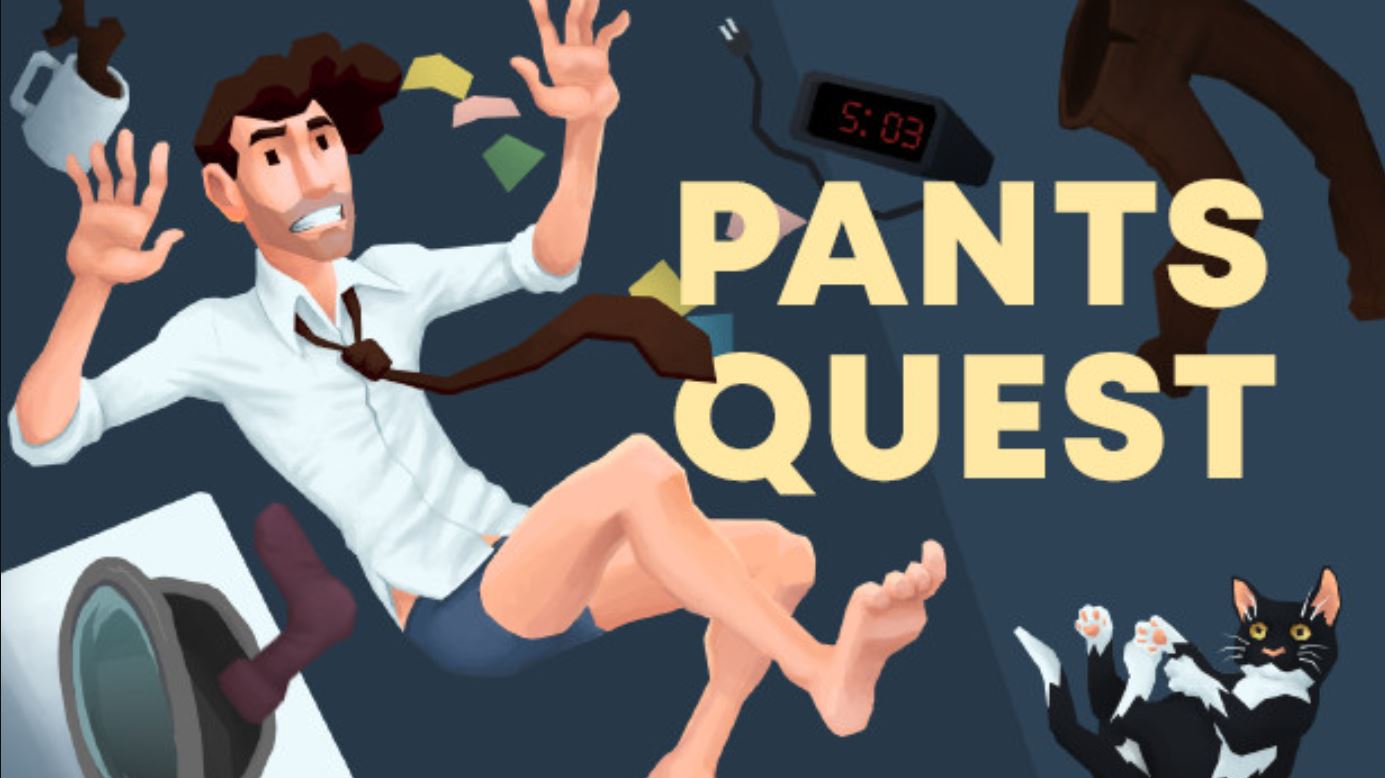 A point and click adventure that revolves around a catastrophe of a morning, Pants Quest is a short, smart story. The Finger Guns Review.

A point and click adventure that revolves around a catastrophe of a morning, Pants Quest is a short, smart story. The Finger Guns Review.

We’ve all had one of those mornings. Maybe you wake up late because there has been a power cut during the night, resetting your alarm. Maybe you wake up and find your packed lunch on the kitchen floor, partly eaten by the cat. Perhaps you reach the front door and can’t find one of your shoes. There’s nothing worse than having your whole day thrown out of sync by a disaster of a morning. For Dave, the protagonist of Pants Quest [Steam], that disastrous morning begins when he can’t find his pants. It spirals further out of control from there. The goal for the game is simple – find your pants and get ready for work – but even those everyday activities are going to feel like gargantuan challenges.

Pants Quest is a point and click adventure made in the traditional LucasArts inspired vein. There’s an intuitive inventory system and you’ve got to use the 4 actions – Look At, Use, Pick Up and Open/Close – in order to perform actions or create things in order to check off items on a check list.

While achieving everything on this list – from drinking coffee to finding your pants – might seem simple enough, nothing is going to go as planned. There are constant hints that Dave’s life has been in a tailspin for a while and this disastrous Monday morning is just another bad day in a series of bad days that he can’t seem to snap out of. The coffee will spill. You won’t be able to find your keys. A bulb will explode, spreading glass on the darkened stairs down to the basement. The washing machine will feel like some mystic device that requires an enigma machine to activate. These events just feel par for the course around the minefield of dirty laundry, an oven full of old pizza boxes and the smoking car wreck of overdue DVD rentals that Dave calls an existence. Pants Quest does an brilliant job of portraying that feeling of helpfulness when your morning turns into a catastrophe. Even when some of it is purely self inflicted. There’s a moment when Dave crumples to the floor and starts to chat to himself after yet another thing goes awry that I think most adults will be able to empathise with.

Checking off the items on this checklist will be almost exclusively solved by interacting with the environment in the 6 rooms of Dave’s house, picking things up and using them where they seem appropriate. That classic combination of trial and error mixed with a touch of intuition is the route to success here (or whatever degree of success simply getting dressed can be classed as, I guess). The most taxing this game gets is when you’re tasked with remembering a simple password or a procession of washing machine button presses. The puzzles found in Pants Quests are inconvenient rather than challenging.

That’s an aspect of this game that feels intentional. While many modern day point and click adventures are opting to make things more seamless for the player, there feels like there’s deliberate attrition built into the systems here. You’ll be able to see what to do it, but actually doing it won’t be straightforward. For example: using a microwave. You can’t just “Use” an item on the microwave; You’ve got to open the microwave, use the item on it to put it in there, then Close the microwave. Only then you can finally use the microwave to start it. The same logic applies to every aspect of Dave’s house. This results in a mild friction between the player and the game that mirrors the exasperation that Dave is feeling about his morning. It’s quite masterfully put together in that regard.

That quality extends to the art work and atmosphere in Pants Quest. There’s no music or voice acting in this game. Overshadowing the whole experience is an early morning darkness and a consistent downpour of rain. Every curtain you open will unveil another rainy visage to complement the constant sound of rain hitting the windows and roof. Dave and his cat Nugget are the only signs of life for 98% of the game. They’re both well animated in a pixel art world that manages to make everything clear and easy to determine.

While my description of Pants Quest might make it sound like a dour experience, it’s actually anything but. I’ll admit, there’s an element of schadenfreude in watching Dave’s morning implode over something as simple as a missing pair of trousers. Even without that though, there’s a light-hearted, 4th wall ignoring tone to the entire game. Dave is an interesting character to get to know via the descriptions he makes of everything in his home. When you hit particular milestones, Dave will also monologue about his life too. He’s quite a quirky guy that’s fun to spend time with.

Despite that time being quite limited – Pants Quest lasts just an hour or two – the game doesn’t feel rushed and manages to tell an odd short story that eventually delivers a poignant message. By the time the game ends and one final calamity befalls him that punctuates the disastrous morning, it feels like Dave makes progress. It feels like this crazy morning might have been the final straw to push him to get his life together. Maybe. There’s hope at least, so I’m chalking it up as a happy ending.

One glitch aside – the right side of the inventory stopped working at one point, forcing me to quit to the main menu – which I fully expect to be fixed before the game launches on March 2nd, 2022, Pants Quest is a really great game. It would feel unfair to compare this game to the Monkey Islands or Broken Swords of the world because this title isn’t attempting to complete with them. Instead, it feels like it’s aiming to be a little curio all on its own. It succeeds in doing just that. The outlandish quest to find some trousers acts as a trojan horse for a surprisingly poignant message about getting you s**t together. My inner 25 year old felt this in his lazy, procrastinating, does nothing other than play video games all day, bones.

A quirky, short but smart point and click adventure, Pants Quest is the mildly and intentionally abrasive journey through one man’s calamitous morning where nothing goes to plan. It might only last for an hour or two but in that time, it has the capability to make you feel a myriad of things. If you enjoy little, unique gaming curios then this is certainly worth a look.

Pants Quest is launching on PC via Steam on March 2nd, 2022.

Ori and the Will of the Wisps Review – Beauty and Precision
Release Date revealed for Sherlock Holmes: Chapter One.
The Finger Guns Podcast Ep.90 - How To Improve The Switch