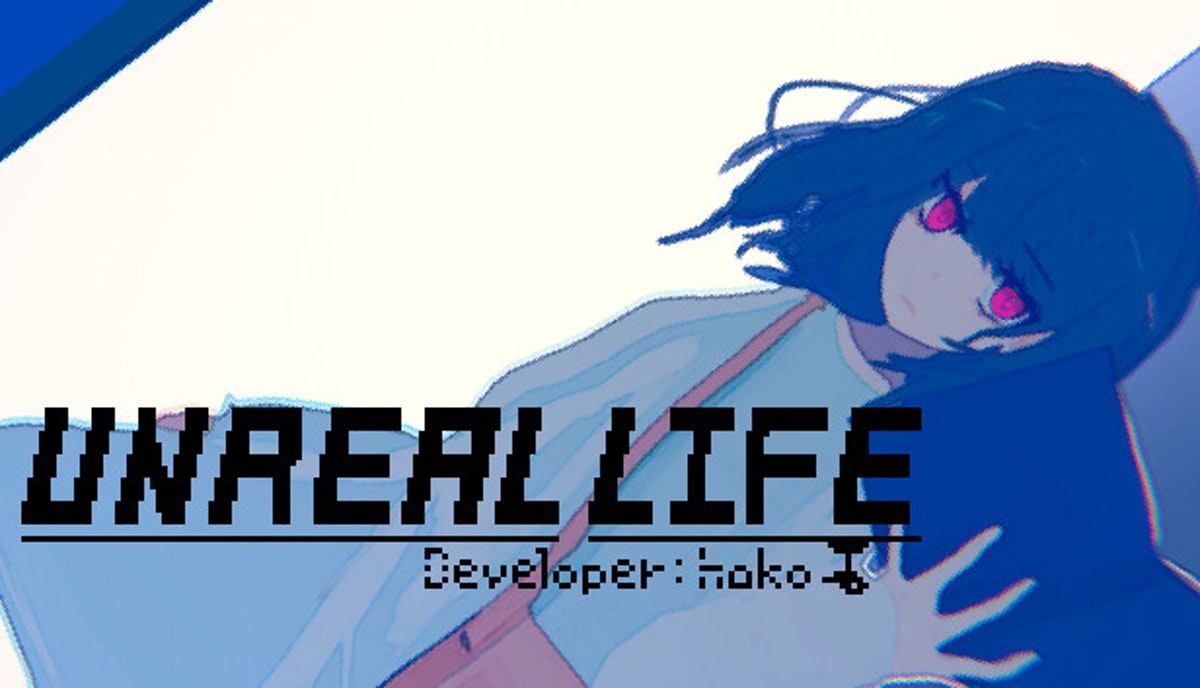 Unreal Life is the side scrolling adventure puzzle game ofa talking traffic light, and a lost girl in the city. The Finger Guns Review

Unreal life is a mysterious adventure game following the path of discovery for Hal, a young girl who has awoken in the middle of the street. Hal does not remember anything and players must gather her memories to piece together what has happened to her. The only thing that is certain is Miss Sakura, a women who she feels was there before she lost her memory.

Hal wakes from the middle of the street, hazy, uncertain and lost. She is unsure where she is or what has happened. It is here players begin the story. Players have no prior knowledge to what has happened, or any background to Hal; creating a symphony of symmetry.

I am not going to lie, did I think it was immediately strange when a traffic light started talking to me? Yes. Did I kinda love it? Also yes. Unit 195 can communicate with Hal somehow, and acts as a guide. Unit 195 reports that he will try to protect her and help her make sense of what has happened.

From gathering your bearings, and trying to locate your surroundings, Hal realises that some objects can allow her to see a previous timeline. Hal can touch objects and flip between present and past times to be able to piece together what has happened.

The story is intriguing, engaging and never boring. It feels as if you are consistently in a dream like state, floating around the city trying to pull your way out. The game world almost feels endless, yet it’s a sidescroller by nature.

Hal receives message like flashbacks, flashbacks that are the written word, violently written in red font. She almost enters dissociation in her own lost realm where some objects trigger a potential difficult clue to digest. Was she kidnapped? Did she commit murder? Was there a car accident? Was she driving or hit? Or are these all  explainable circumstances that need more information.

As you piece together the clues and meet others around you that can aid you, some chapter of a story will start to form. However Unreal Life is clever at never succinctly giving you a narrative. Just a sequence of Hal’s next clue’s to piece together.

Hear No Evil, See No Evil, Touch the Evil

Hal has the ability to touch objects from the get go. Unreal Life allows you to use your bumper buttons to compare the timelines and how this might be the key to your next puzzle. Unit 195 is a huge dependent for Hal as she can’t read. Eventually as the game continues, you learn to unlock the ability to track thoughts, what you have heard and what you have touched to be able to keep track of your puzzles.

This is a handy feature but somewhat messily designed and feels a bit haphazard to navigate. Each feature is in list form. You can press the accompanying button to detail whether you want to go through what Hal has touched, heard or read, but other than that it is not much more than scrolling through a big never ending list. This can make you feel a bit lost when you are far into the game and just either scrolling to the very top (or bottom) depending on your directional preference or just mindlessly scrolling searching for the exact sentence or object you need to review.

Hal is equipped with a satchel in which she can hold and collect items she finds along the way. Items may need to be purposely used or can just be in your hand to be useful. However, one thing that did appear strange was once an item was equipped, you could never just ‘put it back in the bag’ you were kind of consistently holding it until you swapped it out. This is extremely minor but just something that felt a little odd. Especially later on in the game when other abilities are unlocked and the same mechanic happens when it is just there floating on your screen as Hal walks around.

An Apple a Day

The game’s difficulty never spikes to frustration. A problem with puzzle sidescrollers sometimes is that it can feel as if you are just pacing back and forth between the same two locations and Unreal Life never felt as if it was arbitrary or lazy in design. The puzzles are thoughtfully prepared in a way to enquire and not to punish you. At times you may be one step ahead of the game, knowing that B is involved but not figuring out A just yet.

The game doesn’t allow you to skip ahead and you will need to take a step back, take stock and action when ready. Later in the game, the tiniest of details can be the difference between you moving on or becoming stuck in your tracks. Distracting someone with an apple tree, or guiding a cute doggo through plumbing, even when thought provoking I didn’t want to slam my switch down in a huff.

Puzzles however, are not the main pull to this game and shouldn’t be the main attraction that tempts you to jump in. The real treat is the art and story.

As mentioned before, visually Unreal Life holds this dream state atmospheric, moonlight feel. The graphics are pixelated but charming. The setting takes place at night and so all colours denote a midnight blue hue.

Locations are plenty for such a short game, based at a hospitable hotel, from travelling to street walks to libraries, to exploring train carriages. There is plenty to see and plenty to uncover. Characters you meet a long the way are mostly in the form of animals, or people with shapes on their head. Who am I to question that when my best friend right now is a traffic light?

The script is pleasant and there is a notable character within every ally you meet. Unreal Life offers no fight or enemy encounters so no need to worry about strength or defending Hal.

Unreal Life kept me intrigued throughout. Although through a well balanced build up, Unreal’s End came to an end abruptly. Confused and a bit perplexed I was seeing the credits. It’s difficult to see what the narrative may have been from the very beginning. I dove back in to make sense of this, as it invited me to my autosaves and realised that Unreal Life has multiple endings depending on your actions within some of the scenes. I won’t spoil it, but I got this real warmth between some relationships, as well as curiosity between others. Such as Hal and Unit 195, compared with Hal and Miss Sakura.

I left Unreal Life still yearning for an explanation of some sort. There was a particular ending which did leave an emotional remnenance behind, but I still felt as if just the puzzle wasn’t quite finished.

It very well could be that was the point. Multiple endings can always lead to multiple interpretations of the narrative, which I think is grand if the branches of choice are obvious or at least telling that different decisions are at play. However, when it felt so guided for most of the game, it’s difficult to suddenly uncover interpretation.

Despite this, I would still recommend Unreal Life to anyone who loves indies and wants to play something with a lot of heart and story. The pixel art style is fun and the game is great for comfying up in a nook for a few hours. There is even a fun little retro minigame to find. Who doesn’t love that?

Unreal Life is a charming indie game filled with story, adventure, discovery and a talking traffic light. It’s unique as you’ll be comparing timelines to discover what happened to the protagonist Hal on one fateful night. It’s a game that invokes curiosity and keeps the player intrigued through storytelling and puzzle, presented in a gorgeous pixel art of blue hue. Although feeling like it ended abruptly, there is a lot within Unreal Life to invoke emotion.