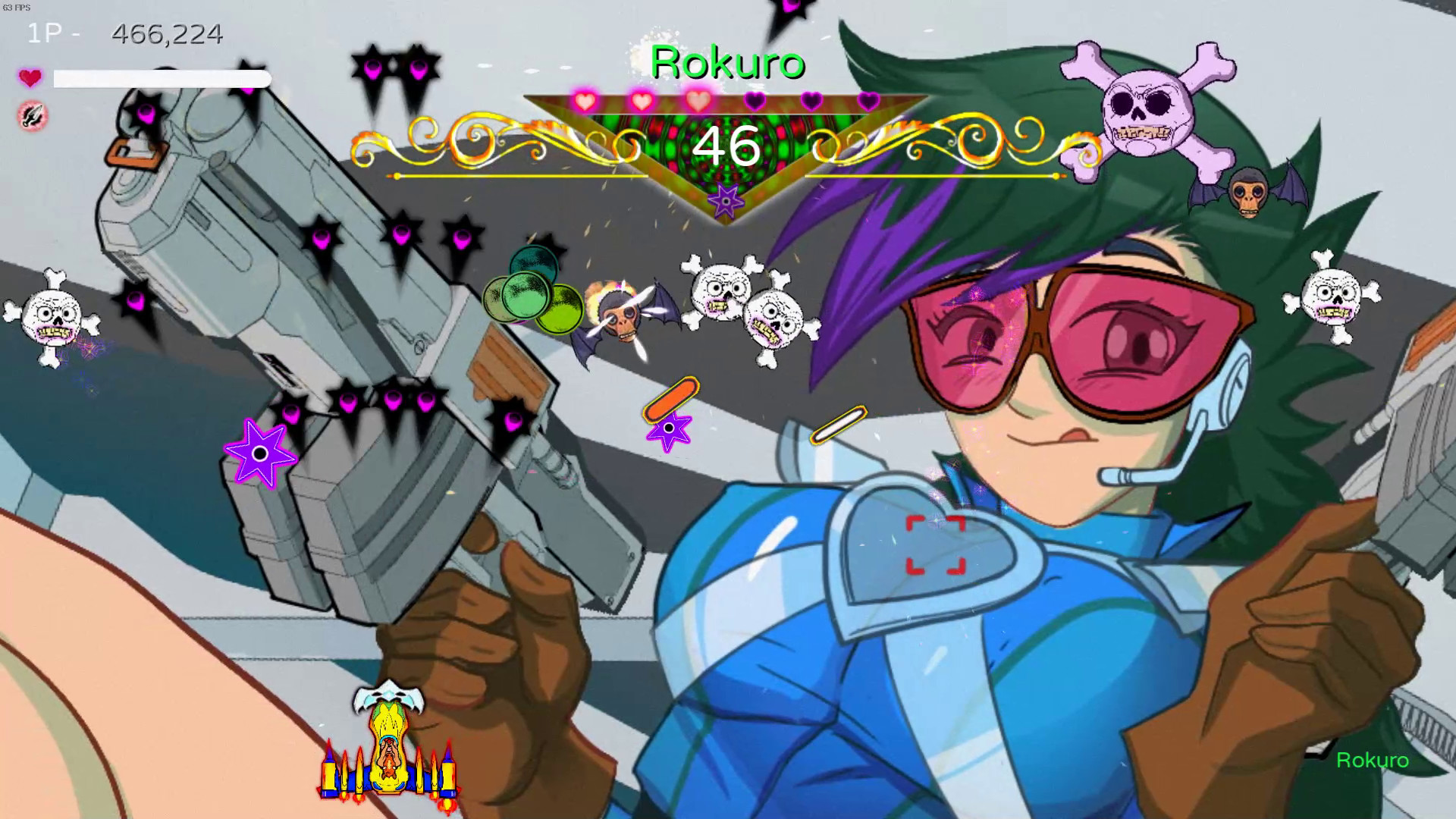 A functional shmup that’s all about shooting the clothes off of Ecchi women, Waifu Uncovered will please its target audience but no one else. The Finger Guns Review.

Waifu Uncovered does have some kind of narrative but it’s not explained within the game at all. I had to get most of this online. You play as an anthropomorphised horse in a ninja costume (jebus knows why) who flies a phallus shaped spaceship. He (I’m presuming it’s a he) is out to protect 8 women who’re under attack from aliens and to do so, he has to knock their clothes off. Sure. An attempt was made. Just go with it.

This is a shmup like any other. Consisting of 8 missions which can be played across 3 game modes, the aim is to use the dick shaped ship that shoots upwards and is free to move around the entire screen to shoot the aliens that spawn above. The aliens themselves will fire back at the space shuttlecock and chip away at the health bar should they manage to land a hit. When the health bar is emptied completely, it’s GAME OVER and it’s back to the start you go.

As you defeat these aliens, they’ll occasionally drop power-up’s. Each of the game’s 5 cock rockets has base stats like bullet power, health, number of assistance possible and more (you start with just one ship and unlock more as you play). As you collect these power-up’s, the ship will get more deadly, harder to kill, faster and fire more bullets. This offsets the steady difficulty rise during some Waifu rescues.

The one interesting aspect of Waifu Uncovered is the structure. Each battle is made up of 6 separate waves. During those waves, the aim is to collect a set number of purple stars that fall from defeated aliens. The bigger the star, the more of the target number they account for. Once you’ve collected enough stars, you’re rewarded with the removal of one of the Waifu’s items of clothing. First outer clothes then eventually underwear. After the 6th wave, you’ve then got to defeat a boss to fully save the now naked woman who is always smiling and happy about having all her clothes shot off for some reason. I think I’d be a bit pissed off if I was left naked outside after being attacked by aliens but hey, that’s me.

The bosses waiting at the end of each rescue are a particular highlight of the game. That’s not to say they’re entertaining but fighting these bigger, more dangerous enemies is one of the only challenging moments in Waifu Uncovered. At least in the Arcade mode. A giant poop that leaves brown smears across the screen, a skull that shoots down the screen then shoots out a bullet hell-esque pattern of fire to maneuver through. These bosses can really put up a fight as some of them are bullet sponges and others can attack quickly.

The rest of this game is quite simplistic. Some waves block a lot of the screen off with massive troll meme boulders. Others focus on one particular enemy type. There’s not a massive amount of variation and within an hour of play, you’ll have seen everything this title has to throw at you.

Thematically, the Waifu Uncovered is just all over the place. It’s a real mess. The aliens themselves are a mix of 4chan inspired images and cutesy cartoons that look thrown together. UFO’s, Skull and crossboners, butt hole angels, cat heads, blue balls, poop emojis, red balls, Easter Island heads, the troll face meme – it’s random and there’s no relation to the characters you’re attempting to save or the games theme in general.

Let’s get this out of the way with here: The Ecchi women you’re blasting the clothes off of do get naked – but you’ll need to play the game in “Censored” mode first. In this mode, environmental elements are placed over the nipples in almost comically precarious places. The football playing Waifu has her breasts covered by single blades of grass, for example. After you’ve “saved” a handful of women in the “Normal mode”, the uncensored mode is unlocked which removes these items and the nipples are then on show. If you just want to ogle at the women, you can simply view their start and final states of undress in a gallery when you’ve “rescued the Waifu’s once. There is no full frontal nudity in Waifu Uncovered on the Switch. There’s

Your mileage with the nudity here will vary. I’ll be honest – the images and Waifu’s here did nothing for me. Undressing them didn’t feel like a reward because they’re so stereotypical – a cheerleader, a football player, a cosplayer, a soldier, a cowgirl, a red headed emo chick. It’s all so on the nose and without character. No judgment here if this floats your boat. It sank mine like the Titanic.

Waifu Uncovered has 3 game modes – a Normal, Arcade and “One Finger Mode”. The first 2 are similar versions of the same game. The “Normal” game has 7 Waifu’s to rescue and it’s incredibly simple. All 7 rescues will take a few minutes each and if you always pick the easier of the 2 options you’re presented with to rescue next, the power-up’s you get will make the rest of the game a sinch. The bosses in this mode do little more than move from left to right and shoot at you from distance. A full playthrough can take less than half an hour. Thankfully, the “Arcade” mode is more difficult and cranks up the alien lethality and boss attack patterns so the game is somewhat fun.

Lastly there’s the One Finger Mode, unlocked by getting half way through the arcade mode. Ditching the thumb sticks so you have a hand free to do your taxes, peel an orange or whatever else you would want to do, you use the touch screen instead. Firing of white blobs is continuous as you move a condom shaped ship around the screen. The content is exactly the same but having the reactivity of a touch screen and a ship that reacts at the speed you move means this mode is actually the most enjoyable in Waifu Uncovered.

I’m sure it will please its target audience but for me, Waifu Uncovered is a simple, functional yet characterless shoot ‘em up that rewards the player with lewd images that are far too stereotypical. There’s less than 3 hours of content in the game across all 3 game play modes and you’ll have to work to get to play on the game’s best mode, “One Finger Mode”.