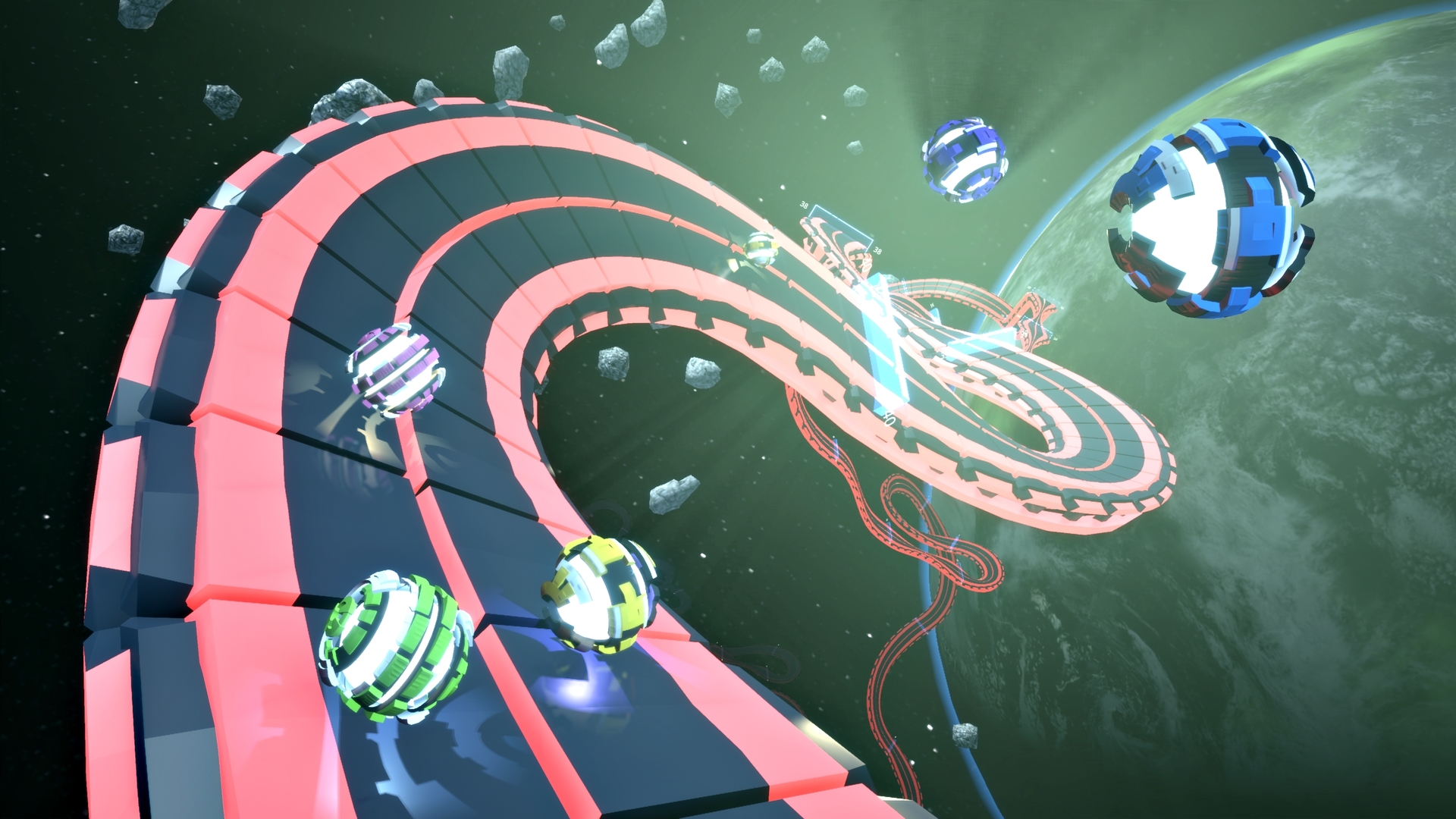 Fast and frenetic, Super Impossible Road evokes the older generation of quick, arcade racers from yesteryear. But does its fun make up for the frustration? The Finger Guns review:

I used to have anger issues with gaming. When I couldn’t pause on Mortal Kombat II, I kicked the SNES (didn’t realise that was part of the game). Jinpachi Mishima had me swing a PS2 controller into the floor, and it exploded. I thought I was getting better… until Super Impossible Road came along.

A simple concept: steer your Beyblade/Powerball from the top of an exploded Scalextric diorama to the bottom. There are races, time trials, survival and other modes, but the main tenet remains the same. Sounds easy enough, but it is anything but. Almost impossible, you might say.

Thankfully, I’m more financially savvy now that I won’t throw my Switch Lite across the room, but there are times when I wanted to. Super Impossible Road brings out that “one more go” frustration a treat. But is that what makes it worth it, or should you not waste time investing in it? Let’s find out.

In terms of gameplay, it’s really very simple. Whether you’re in Career mode, Daily Race, Multiplayer or any of the Endless modes, there’s one goal: top to bottom. Alright, slight deviations in Endless modes, but the gist is the same. Roll, roll, and roll some more.

Players will pick their ball configuration (more on that in a bit), choose a nice colour, and prepare themselves for what’s to come. There’s no acceleration button, nor is there a brake. Your ball rolls and all you can do is corner with the left thumbstick. A boost meter will accrue as time passes, allowing a hold of the A button to speed proceedings up.

In terms of gameplay, that’s essentially it. Ball roll, you control. As you get used to it, you’ll find yourself cutting corners and in time, parts of the track. The only caveat with that is a fade-to-black timer that will reset players, so tactical skipping is the name of the game.

And trust me, with these tracks, you’re going to be getting used to that. Or die trying.

In Space, No One Can Hear You Yell In Frustration

The tracks themselves remind me of Rollcage, or if you’re familiar with its latest iteration, GRIP. Futuristic, sleek affairs with twists, banking corners and gaps are the order of the day here. Set against spanning spaces vistas and orbits of planets, it really sets a magical scene against the frustration of racing.

It’s not pushing technical or graphical innovation in any sense, but it doesn’t need to. My Lite can handle the fast paced racing without any slowdown or lag, even whilst using the boost. Tracks are randomly generated, so there’ll be no mastering them like Rainbow Road here. Players will go in blind each time, finding track-cutting shortcuts on the fly.

The downside to that is that there’s no adjustable learning curve. You don’t start on something basic with a hairpin or two before it ramps up in difficulty like a Trials game. It’s more a case of hoping for the best, nailing a landing and not raging out when you fall off for the umpteenth time.

What did strike me about Super Impossible Road was the level of customisation available. At first, I thought you could just change the colour of your racing orb, I didn’t consider “Bounce Dampening”. But yes, that is something to consider if you don’t want to careen off of a landing.

Before each race, players are given the option to change out parts of their orb, such as steering/cornering, boost recharge rate as well as the aforementioned cancelling… and the colour. Of course, given that the tracks are randomised, it’s not something you can plan ahead for. It boils down rather to player preference than track management.

Personally, I like my orb to corner tightly and not bounce like it’s made of rubber on a landing. I barely use the boost, as I haven’t mastered the art of not launching off of the track. If I were better, I’d be nailing the right moments to boost, launch over a section of track and land into a hairpin. Alas, I am not, so I will not be setting any world records.

Twisting Roads and Many Modes

Okay, “many” is a slight exaggeration, but there is variety in Super Impossible Road. Namely in its Career Mode, in which you tackle a grid-like advancement system of events. You will also earn experience, but this serves no purpose other than to have a numbered rank and badge by your name. If you wanted an example arbitrary, this would be it.

Anyway, back to the game: besides the standard race format, there’s a handful of variations on “top to bottom” gameplay. There’s one that see players hitting rings that are off of the tracks, which is a skill indeed. Another will have to deliberately avoiding the checkpoints on the track, meaning you have to take off that earlier mentioned Bounce Dampening to get some air to “hop” them.

Then there’s your standard suite of time trial and survival, meaning you have to hit speed targets or gates to keep going. It’s all variations on a theme, as I said, but it never gets boring. With the track randomisation, you’ll always be on the edge of your seat trying to navigate all the twists and turns.

And with the level of frustration that comes with it, it’ll never get stale.

You Keep Saying That Word…

To summarise, then, Super Impossible Road is hard, but not impossible. I guess it wouldn’t make for good marketing to call it “Super Slightly Infuriating Game That You’ll Eventually Get The Hang Of” though. However, it will absolutely test your patience from time to time.

Coupled with an electronica/techno soundtrack straight from 90’s era PlayStation gaming (think WipeOut and the like), it’s an absolute blast to play. There’s online and local multiplayer, should you fancy it, but there’s more than enough challenge for playing solo too.

There’s even a first person camera mode if you really want to make yourself nauseous. Again, I’m playing on the Switch Lite, and that was mental. First person on a massive TV would either be an experience, or headache inducing. I’d imagine it’s akin to those that enjoy Mirror’s Edge or get vertigo from it.

I had a blast with Super Impossible Road, and if you’re into your classic era, arcade-like racers, you’re in for a techno treat.

A visually impressive racer, Super Impossible Road is tough but fair. Randomised levels, frustrating “one more go” gameplay, coupled with a classic PlayStation-era soundtrack, there’s fun to be had here. It’s a bit bare bones outside of its Career Mode, but that is deep enough to keep players going. Or annoy them in equal measure.

Super Impossible Road is available now on Nintendo Switch (reviewed on Lite) and iOS. A release is planned for the PlayStation 4, Xbox One and Series, and PC.