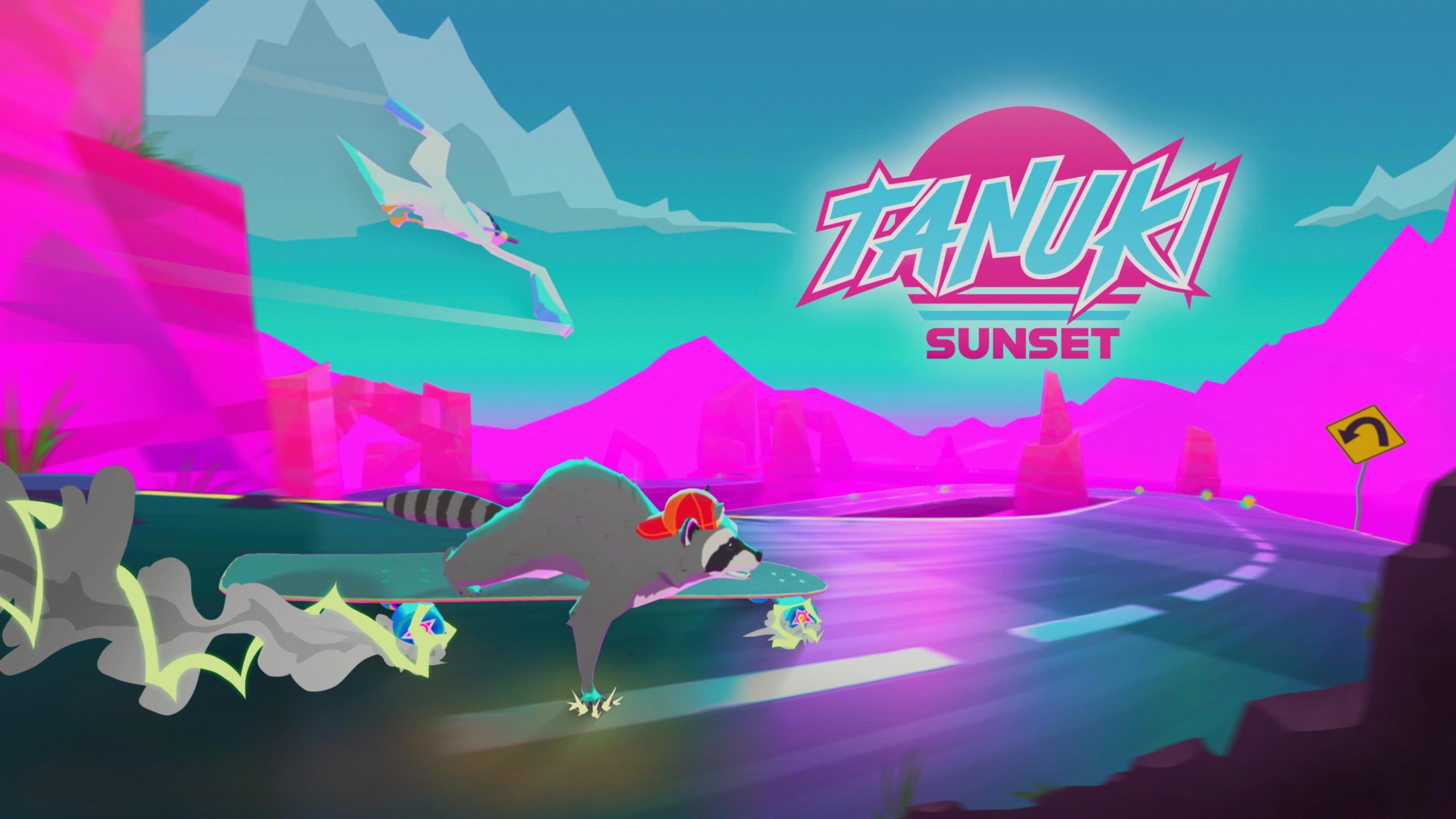 From trash to thrash. Raccoon meets Longboard Arcader, Tanuki Sunset releases. But is it a total wipeout? The Finger Guns review:

Tanuki Sunset is what happens when you cross a popularly meme’d animal with an esoteric extreme sport. Memes and gimmicks are often put together to varying degrees of hilarity, and this game is no different. But how does it fair beyond its initial joke? It had an original release on Steam and Itch.io in 2022 with very positive user reviews. 80’s vibes ooze from the trailer and my own first impressions were high. But by the end, I think there maybe a few too many piles of rubbish, so much so that even a Raccoon may stick their nose up at it.

Skating Into the Sunset

You start your journey as a raccoon just wanting to be on the cover of the popular FISH Magazine – the racoon equivalent to Thrasher. But first you must shred the craziest of downhill roads before making it to The Big Ramp. It has a lot of charm overall, with a cast of tubular characters from Bob the sloth, Monkey and Chad. They’re all kind of just stoked to offer you up new gear as you progress, but it’s your mum who is a supportive backbone for the tanuki. It’s fine and serviceable, really just a set dressing to the game to feel more fleshed out. However, it didn’t showcase the world it presented enough to make Tanuki Sunset a more involved experience.

The core gameplay sees your radical Raccoon taking the longboard downhill on the roads of Sunset Island. The levels are long and winding with varying obstacles to zip past and corners to drift. The end goal is to get to the bottom as quickly and stylishly as possible. Drifts, flips, grabs, near misses and riding on the edge of the road builds up your score. There’s not much in the way of variety on how you play, every feature is designed very specifically for the levels. Maybe some more tricks to pull off would have left some room for flare during my playtime. Instead I was doing the same thing in the first hour as I was in the sixth.

There’s few modes to play through in Tanuki Sunset. The Story mode is the bulk of the gameplay, playing which unlocks new areas and new gear. You quickly learn the base mechanics through a tutorial. Holding forward goes faster, backwards slows you down; and holding X (PS5) whilst turning with the Left Stick or using the triggers will initiate a drift. I originally tried the adaptive triggers, but they were awful to use. It felt like I had no control over my turns and kept falling off. Switching it to the X and direction combo made the flow of the game a lot more fun.

On your travels there are bits which speed you up along the course whilst also being the games currency. There’s many to collect within the levels but it does take a few goes of a level or general progression to be able to buy the cool clobber for your raccoon. There’s even an item that costs 100,000 bits which is a lot of grinding. Too much for the limited offerings in the game.

There are 3 unique Stages, each containing 3 levels which are procedurally generated but contain the same features. Area 1 and 3 end up looking pretty similar outside of the change in colour palette. The City area in the second zone was the standout aesthetically. As you progress, different obstacles and new ways to score points are introduced. These progress the difficulty to keep it interesting. Though I have a few gripes with the execution. In the story mode specifically, the checkpoints are far too sparse. In the later levels crabs are introduced hindering your navigation and speed. By the end, it far outweighs the risk vs the reward.

You can earn stickers per level for a high score, time beaten and not dying during the level. Even if you tried to tackle these objectives separately, it’ll be a struggle; there’s an element of RNG because of the procedural generation which means that success is luck dependent. On top of that, failure and restarting just adds to the overall time to the level. It builds a frustration that contradicts the chilled out exterior Tanuki Sunset presents.

Others modes like the trials present these similar problems also. Luckily there’s no RNG on the courses, but levels like the Time Trials just ask you to beat a score that even if I’ve felt I’ve done perfectly is still at the bottom of the leaderboard. I never understood it, using the mechanics it presents to get through the levels should mean I’m playing the intended way, but I can’t help that I’m just missing something. Endless Mode is the most relaxed you can get. Whilst there’s a section to tell you your Best Score and Longest Distance, there’s no pressure to fulfil any objective – just to outdo yourself. I’d have felt perfectly fine with hard to beat scores or times if the game couldn’t turn unfavourable with RNG. A better inclusion would be knowledge of the level and executing it to perfection over time.

Being able to customise what your raccoon wears and rides are a welcome addition to Tanuki Sunset. This is one of the ways that the game leans into the 80’s aesthetic. Whether it’s tie-dyes, Pit Viper shades or the – definite attempt to not get sued – Walkdudes, you can make you furry trash diver a Lycra legend. If only there was Lycra. Colours are bombastic in every aspect of the game, making it at least look fun even if it’s hard to find in the gameplay. This is doable in the hub that acts as a skate shop. Bob’s Skateshop is a cool little room to go to between runs. You can roll around and pet Dio the dog but there’s not many other nooks and crannies to explore.

Music in Tanuki Sunset is hit or miss for me personally. I have no real nostalgia for anything 80’s so songs inspired by Bossa Nova or cheesy rock anthems really didn’t do it for me. Having said that, the more modern sounds of lo-fi hip-hop are a great listen. I wish there was the option to change your Walkdude’s playlist in the settings so you can choose what you want instead of skipping tracks to get to the next Ghost Tone song.

But if looking the part and sounding the part wasn’t enough for you, there’s also a Photo Mode. It’s a little bare with the main options being camera movement, but you can slap the title on the photo and make an awesome wallpaper.

I’ve come away with mixed feelings on Tanuki Sunset. The less objective based player in me is happy to drift down the turbulent streets of Sunset Island, despite some of the mechanical inconsistencies. That said, the completionist in me is left frustrated at the unfair bar the game sets to accomplish some of the tasks. It feels fun to play overall but the technical game aspects needed a bit more tweaking to get that balance right. I always come up just shy of doing the time trials and unless I’m actively avoiding one challenge over the other, I usually can’t get anywhere with them. Maybe it’s by design to add to replayability, but the really great arcade games make it possible to do it all at the same time if you nail the run. That doesn’t feel possible here.

Tanuki Sunset is fun to play if you take it as seriously as a Raccoon on a Longboard. The visuals and colour palette pop and there’s a nostalgic but limited soundtrack to shred into the sunset. Those looking for a mechanically sound Arcade game won’t find it here however, with a little too much randomness bouncing off rigidly set challenges.