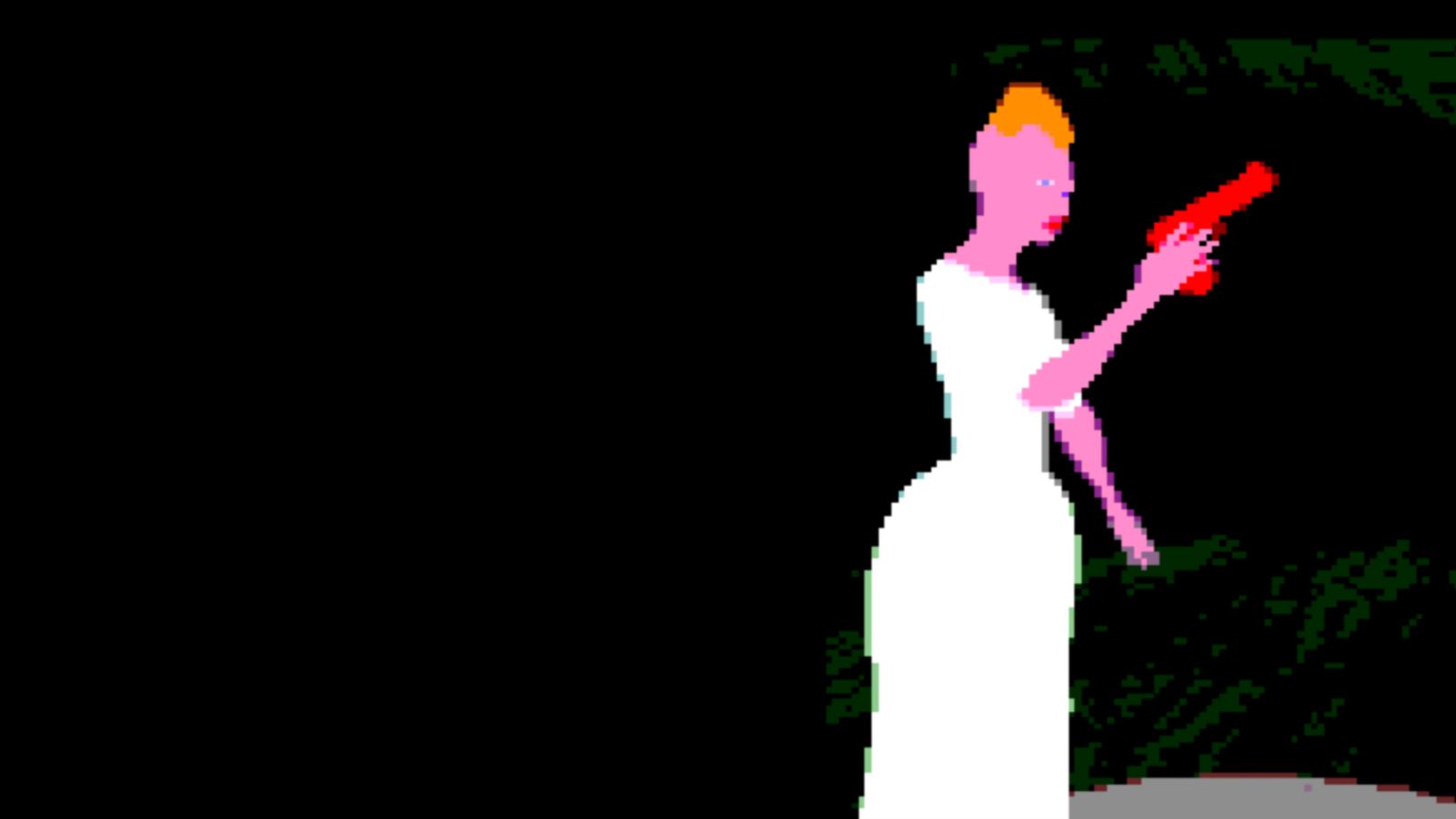 I don’t think I’ve ever paid 20 pence for a PlayStation game, not even on sale. That is the standard asking price for The Voices’ newest game, Spectrewoods. It’s described by the developer as “a very short almost walking simulator game” which is an accurate pitch for what it is. It’s just an utterly atrocious one.

The game begins with a stiff, silent cutscene. There’s a pair of women standing either side of someone who looks like a minister. It looks like a wedding. The screen goes black. When the screen returns, the minister and the bride on the right are gone and the flowers that the remaining bride was holding have transformed into a gun. If I hadn’t read the game’s store page description which says “During your midnight wedding in the woods a mysterious occurrence leaves you alone battling spectres”, I don’t think I would have understood the story this game was attempting to tell. Having spent the 5 mins required to finish the game, I’m still not sure I do.

Spectrewoods is made up of 3 levels. There’s no guidance of what to do in those levels. Instead, you’ve plonked down in a third person perspective and you’ve gotta figure it out for yourself. The first time I played this title, I spent about 10 minutes walking aimlessly around the dark forest environment, complete with a short draw distance, without a clue of what to do. I quit and restarted my first attempt because I was hopelessly lost and thought the game was glitched. Nope. It’s just poorly designed. On my second attempt, I noticed an intermittent path of flowers. Follow this and it leads you to a door and the level ending. Lose it and you’ll get no help to get you back to the roads. You’ll simply meander aimlessly.

During the second level of Spectrewoods, you’ll be attacked by ghosts that look like budget Halloween decorations. They shoot large yellow balls at the bride for reasons unknown while stalking you through the trees. The bride’s pistol, complete with irritating firing sound and a complete lack of gun feel, will defeat them with a few shots each.

The third and final level lasts about 30 seconds and is where the story is delivered. That story consists of just 2 words. I’m not going to spoil the “narrative” in this game – if you can even call it that – but let me just say that it’s inane and shallow. This is topped off by a cut scene which adds a little perspective but eventually fades to black and never cycles back to the main menu. It just stays black.

As you can tell, the content and story to Spectrewoods is poor but there’s a litany of design and quality issues too. The whole game is played out in the middle third of the screen, as if presented via a mobile phone screen. It’s an odd way to present the game that feels very uncomfortable to play. The bride’s walking animation looks very stiff, as if she’s got broken shins (and I’m pretty sure is a recycle of the animation from Lizard Lady vs the Cats). There’s no tutorial or guide which means until you’ve stumbled across the lane of flowers to follow, the game seems totally purposeless. Twice, the view point seemed to get snagged on the floor, forcing me to quit the game and restart.

Frankly, even though the game only lasted 5 minuets once I’d figured out what to do, I felt like quitting numerous times before the game ended. Even then I felt short changed of 20 pence. Trophy hunters will love this game. You can get a platinum trophy in less time than the game takes to download and install.

To put it bluntly, Spectrewoods is undoubtedly the worst walking simulator I’ve ever played. It feels like a tech demo built for mobile phones that has been
ported to the PS4 before the narrative was finished or the game play finalised. The asking price might be tiny but unless you’re after a cheap and quick platinum trophy, there’s no artistic content to appreciate here.

Spectrewoods is available now on the PS4.