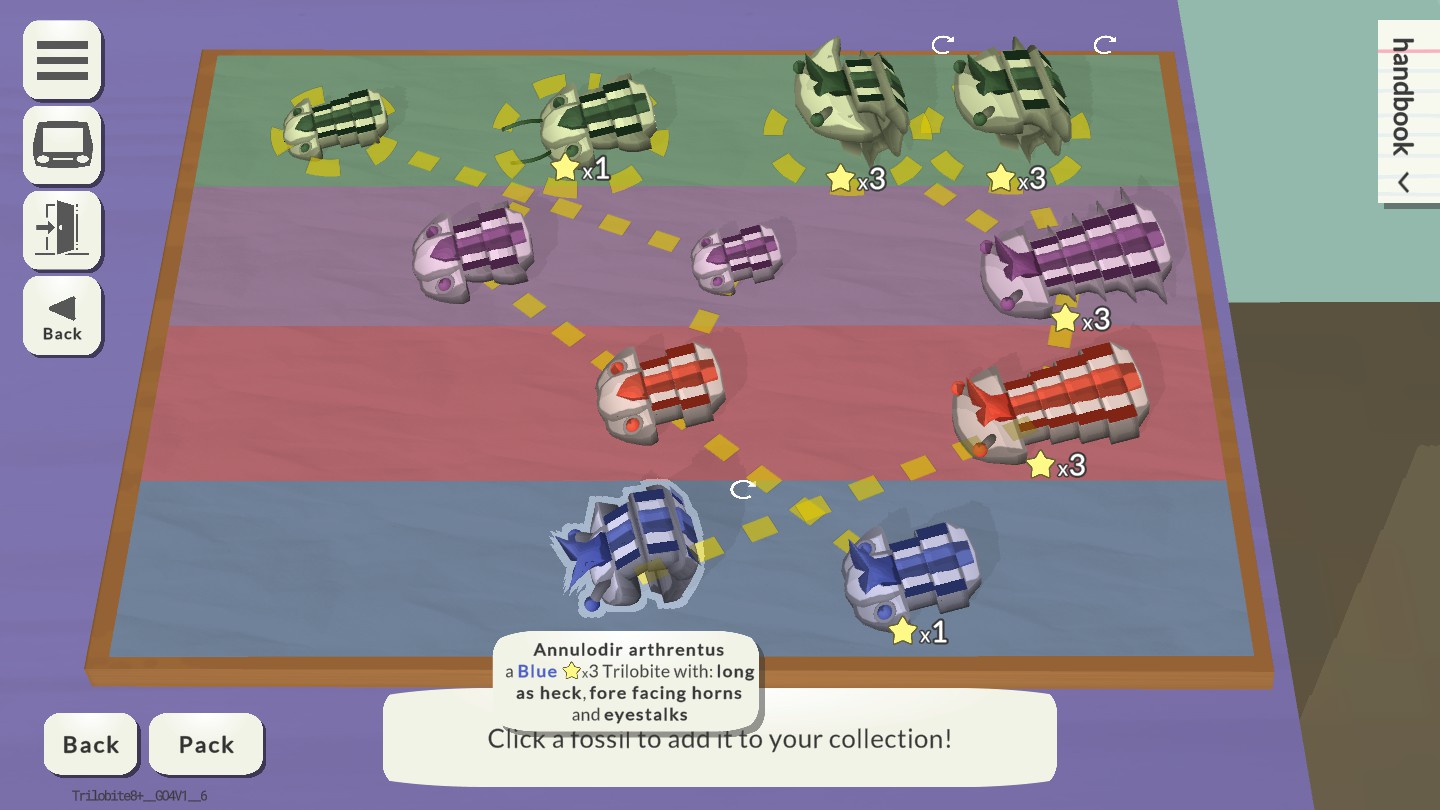 A chilled out puzzle game about collecting and sorting fossils, Fossil Corner is a delightful timesink. The Finger Guns Review.

A chilled out puzzle game about collecting and sorting fossils, Fossil Corner is a delightful timesink. The Finger Guns Review.

Revealed and released during E3 2021’s Wholesome Direct presentation, Fossil Corner is available on Steam right now. I’ve had the privilege to play this game for the past week. Maybe it’s the juxtaposition of all the AAA fanfare going on around me against the small-scale yet well crafted game play loop of Fossil Corner, but this game has been a welcome, calming distraction to just about everything .

In Fossil Corner, you play as a recently retired paleontologist. At the start of the game you can generate a random name for your character but you can change it once the game begins. This retiree isn’t quite ready to hang up their trowel and magnifying glass despite getting their proverbial parting wrist watch. Setting up a little workshop in their garage, they are trying to get back into the fossil game.

At the core of Fossil Corner is a puzzle game. Order a box of fossils and they’re added to your inventory. Place them on a surface where there’s enough space and you can unpack these fossils and trigger the puzzle.

Unpack a box of fossils – either snail shells or trilobites –  and you’re met with a series of horizontally coloured lines. These lines, which match the hues of the fossils, represent an evolutionary step which build upon each other. The lowest band of colour represents a starting point for an evolutionary chain and each colour band on top of that are linked to the one prior. The aim of this puzzle is to sort the shells onto their coloured lanes and then analyse their visuals to determine which fossils are related to those on the previous coloured bar. You can then add links from their start to end point. Once a particular evolutionary chain has been linked from start to finish, they’ll turn yellow to indicate success.

Only one aspect of a fossil family changes per coloured bar in a puzzle. The shape, pattern, structure and more can change as a group of fossils proceed up a puzzle box but only one aspect changes at a time. For example, in a box with 4 different coloured lanes, a starting shell could have 3 relative evolutions as they progress up the board. A small, smooth starting shell might become larger in the lane above, grow spikes in the next colour and have ridges in the upper most bar. There are times when a single fossil will generate multiple subsequent evolutions on subsequent coloured lane which is as common as a particular evolutionary chain ending after just one change. It’s a relatively simple puzzle system that’s reliant on keen observation and a bit of logic. It’s really quite satisfying to sort out the fossils into their coloured groups and figure out which are related to those from the previous lanes. Because of the procedurally generated nature of each fossil box, you’ll rarely see the same evolutions pop up regualrly as you progress.

The most challenging Fossil Corner becomes is when colourless fossils and ‘missing links’ are included. When the former – colourless fossils – are included, you’ll be challenged to figure out which coloured lane they fit into. By figuring out where all the coloured fossils line up with one another, it’s a process of deduction to work out where the colourless fossil should fit. Then there are missing links. These can be coloured or colourless and are a simple question mark symbol which represent a missing evolutionary step. Figuring out where these sit, especially the colourless ones, can be tricky. By doing the usual deduction and linking up what you can, you can usually figure out a rough approximation of where they belong on a puzzle board. A bit of trial and error might be required to figure out exactly where they fit in an evolutionary chain.

With trilobites, there’s also an additional aspect to the puzzle. These little mite-looking creatures can curl up. Because of this, you’ll need to turn them around in order to observe all of their details. It doesn’t really add anything to the difficulty but it does increase the immersion, as if you’re turning these fossils over in your hands in order to make sure you’ve examined them fully.

Once every fossil in a pack has been placed on their correct coloured lane and chained up with their evolutionary links, you get a monetary award and, most importantly, you get to pick one fossil from the box to keep. Fossils come in countless different variations because of procedural generation. They are however scored in an aligned star rating. The more peculiar the features of a fossil, the higher their star rating becomes.

Collecting these fossils forms the game play loop for Fossil Corner. Primarily, it’s to increase the amount of money earned from all subsequent fossil boxes unpacked and arranged. The more fossils you have collected and on display, the more money you earn from the next box. This plays into the second aspect of the loop – you get to turn a blank looking garage into a fossil paradise. Display cases, shelves, furniture and more can be purchased then positioned around the room however you see fit. It’s oh so satisfying just to zoom out in the room to oversee your handiwork and all the ancient shells you’ve collected.

Underpinning all of this is another loop which involves photography. As you progress, the retired palaeontologist will receive emails from past their past co-workers asking if they can send pictures of specific fossils. There’s also app called “Fossil Finder” which regularly updates with quests that ask for a photo of specific types of fossil – and they’ll pay if you can provide the service.

These requests come in a decent variety – a particular colour of fossil with a rare feature, a fossil of a particular star score, a group of fossils all with the same feature or score. The system pushes you to develop a diverse collection of shells and trilobites. For each request you fulfil, you’ll get more money and the ability to purchase more furniture for your garage workshop. Eventually you’ll even get access to a machine that can combine 2 fossils to bring together their unique features – for a cost.

All of this forms a pleasing game play loop. Get some fossils. Sort and link the fossils. Earn cash and buy more display space. Display the fossils and take photos of them. Fulfil requests on Fossil Finder. Get more fossils. Repeat. It’s a simplistic but chilled out experience that can while away the hours without you even noticing.

Which brings us to the narrative. I really wanted to like the background storyline of Fossil Corner. It’s so rare that we get to play as an elderly character in a game. I feel like there was an opportunity here to tell a really interesting story from a perspective so infrequently found in gaming. The narrative unfortunately doesn’t really grasp at that chance.

Told via emails you can read on the palaeontology obsessed protagonists’ computer, the story details your characters struggles with retirement, even missing out on a cruise with friends to stay home and collect fossils. It’s humorous at times, touching at others – but it’s only ever one side of a story. That’s because you can only every see the emails that have been received. Rather than seeing the back and forth, you just get to click “reply” and the email gets sent. You can always infer what the retiree has said in their email from the replies they receive but it’s odd that you can’t see both sides of the conversation.

The story phases in and out too. The emails you receive are concentrated towards the start of the game and arrive more sporadically as you progress until they stop. Because the accompanying plot helps give the game play loop some added value, when the plot drops away, the loop eventually starts to feel repetitive.

Fossil Corner was released during the Wholesome Direct showcase and it certainly epitomises that type of game. Built around a gratifying puzzle and a moreish game play loop, it’s a chilled experience that ticks a lot of those dopamine releasing boxes – it’s short lived however. The narrative fades away and repetition sets in. It’ll fill a few nights but past that, it’ll start to grate.

Fossil Corner is available now on PC via Steam.

Megaquarium (PS4) Review – The Pacifisht Tycoon Game
EGX 2019 – 17 of the Best Indie Games From The Show Floor
Finger Guns Presents: The Games Of The Year 2020