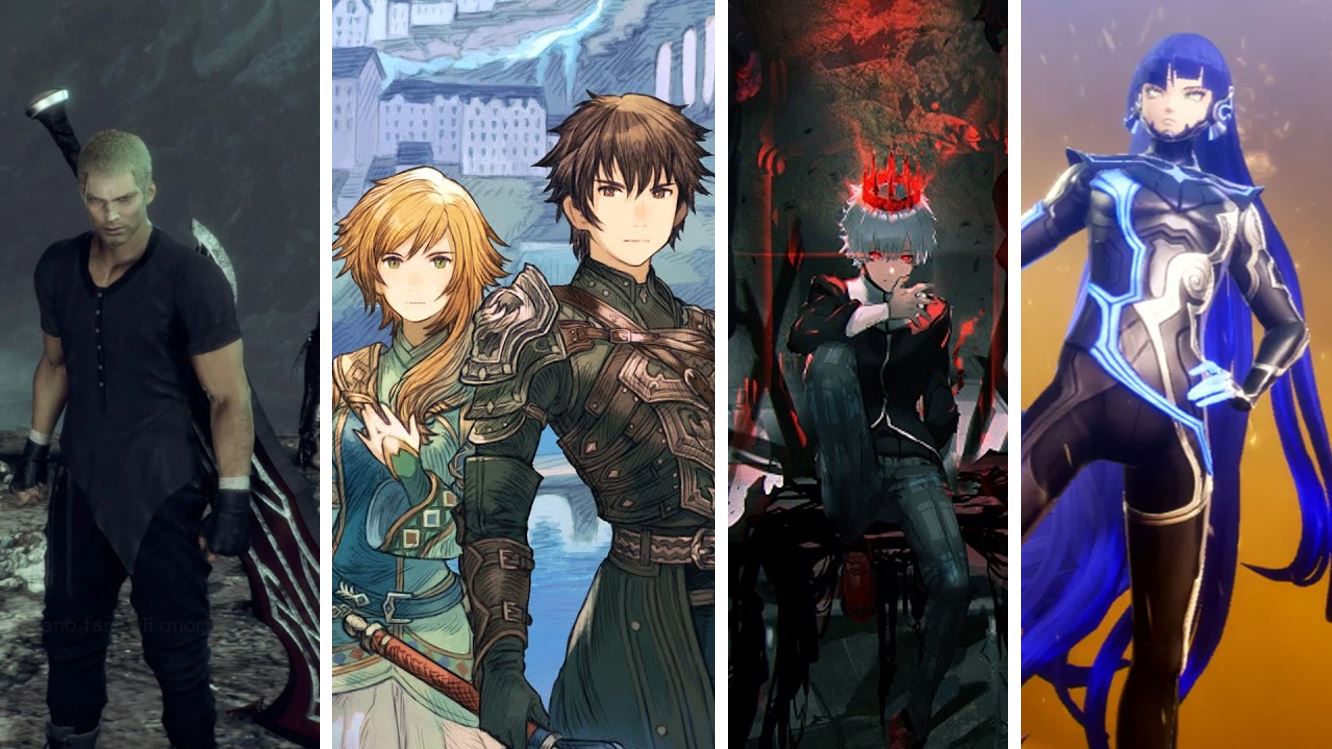 Get your fix of all the RPG news from the biggest gaming event of the year! Featuring talking rabbit plushies, a man wearing a cracked bowl on his head, people shouting at Chaos and Breath of the Wild 2!

As RPG fans, this was the week that Square Enix dropped the Final Fantasy 7 Remake PS5 Intergrade, and Yuffie DLC expansion Intermission. But I’m here to tell you it was also E3. You know, that big games announcement extravaganza. Things do happen outside of Midgar! It means that when you are done with Midgar a second time and Yuffie has begun to grate, there’s still a shit-ton of brilliant-looking RPGs coming out over the next year or so to get excited about. I’ve tried to keep to new trailers only, so here we go.

You awaken in a mysterious academy, there’s a lot of very angsty teenagers around, strange red-eyed skeletons and a talking rabbit plushy. It’s JRPG time in High School again. Clearly taking some inspiration from Persona and Shin Megami Tensei, NIS America’s Monark has you on a quest to defeat the seven Pactbearers, battling through deamonic incarnations of your ego in dungeons that look like madness-tinged variants of the academy itself. It’s very concerned with ego, and defeating the irrational, but it’s still a little earlier to know what’s really going on. Monark is due out in Japan in October 2021, and to be localised for a western release in early 2022 on PS4, PS5, Nintendo Switch and PC via Steam.

We’ve covered a fair bit of Tales of Arise before, so I’ll stick to the new stuff. In the new Summer Game Fest trailer, we are introduced to two further party members not seen as of yet, Dohalim (he’s the classic greek myth-looking guy with the lovely red locks) and Kisara (she’s the white-armor-clad knight, and works for Dohalim). That’s now six party members in total – this is starting to actually resemble a Tales Of game! There are plenty more battle teasers, dual-moves, and tantalising bits of disembodied voiceover, but perhaps most intriguing is that our main protagonist wears half a cracked bowl on his head, for what seems the entire game. I have questions! Check out the new trailer below.

Taking clear inspiration from the Final Fantasies of the last generation or two, Edge of Eternity is leaving Early Access this week. It’s final story content and chapters have been added, and the game is now complete. Featuring a combined turn-based and tactical battle system, Edge of Eternity is the story of Daryon and Selene, siblings who must quest to fight the corrosion taking over their planet, and turn it back before its too late. Oh and you can get to ride a mammoth cat thing across the open world map! Take my money! While the graphics seem very PS3-era, the story and design seems very classic and has our interest piqued! PC players can watch the trailer below and then visit Steam and play it today, while console players have been promised the game is coming later in 2021.

Slap bang in the middle of the Xbox E3 Showcase was the welcome news that Eiyuden Chronicle (the spiritual successor to Suikoden that smashed its Kickstarter last year) is now coming to Xbox family consoles. There are new screens and new characters galore in the trailer below, and also the announcement of another game in the franchise – Eiyuden Chronicle Rising. What is it – well we don’t really know just yet, but the release window precedes the release of the main game. 2022 for Rising, and 2023 for the main release. Rising has a single screen – 2D beat-em-up or sidescroller? You tell us. Pixel art RPG lovers rejoice – now the are two of them!

Square Enix’s showcase was the place to be for RPG announcements, and first among them was the Pixel Remaster series of Final Fantasy 1 through 6. All six games will be remastered and re-released – for the moment that seems to be on Steam and Mobile devices only, but who knows what the future holds after that. If, like some of our team, you’ve never played the original games, maybe now is the perfect time to get stuck in. I would personally recommend 4 and 6 as absolute classics.

And next on the Remaster schedule is Legend of Mana – the last of the truly great Mana games back on PS1. This remaster is coming digitally to PS4, Steam and Nintendo Switch in the west, with possible physical copies in Asia. Legend of Mana was a strange and very original RPG where you received locations as items that you placed on a map, thereby creating the world of the game yourself as you played. Its story is very much based on vignettes, but there is an absolutely golden age RPG in there for retro aficionados to discover. Legend of Mana is available from June 24th 2021.

You may remember there were rumours pre-E3 of a Final Fantasy Souls-like to be announced. Well, the rumours were true, and at the end of the Square-Enix showcase the following trailer arrived; Stranger Of Paradise: Final Fantasy Origins. Developed by Team Ninja (Nioh, Ninja Gaiden) with creative control from Tetsuya Nomura (Kingdom Hearts, FF7R), the game is ‘the story of an angry man’. T-shirt-clad gung-ho tough-guy Jack, and his buds Ash and Jed travel to a strange dark castle burning with resolve to ‘kill Chaos’. He shouts it angrily a lot. Judging by the trailer Chaos is actually Garland – the original boss of the first Final Fantasy game. Featuring intense action RPG battles, it looks more Devil May Cry than Dark Souls. There’s also meant to be a PS5 exclusive demo available now, but the file is corrupted and so far no one has been able to play it. It’s certainly been polarising online, but let’s hope the time until 2022 release window lets us see more encouraging footage.

Two trailers for Monster Hunter Stories 2 Wings of Ruin this week. First up is the gameplay trailer from the Nintendo Direct – riding a dragon ‘Monstie?’ across the environments (like the Palamutes in Rise), gathering and crafting materials much like the mainline games, turn-based Monster Hunting battles where you team up with your Pokemon, sorry Monstie to fight, and harvest materials from your enemies. There was also a lot about Monstie-breeding via eggs, to gain more Monsties for battle. The second trailer is a far more in-depth look at the story and its angsty Rathalos-saving characters. Also Palamutes will feature in a first update post-launch. Monster Hunter Stories 2 Wings Of Ruin is due out JUly 6th worldwide on all major platforms.

Originally announced back in the same Nintendo Showcase as the Switch itself (4 years ago), system exclusive Shin Megami Tensei V finally got a release date and a first gameplay trailer during Nintendo Direct. Then quietly after the show Atlus also revealed a second Japanese trailer with even more gameplay. The latest in the series of demon-breeding and battling RPGs in now due out November 12th 2021 – full to bursting with monsters many players will now know best from the Persona offshoot series. You play as a high school student transported to an alternate Tokyo, where you fuse with a Demon-being into the long-blue-haired protagonist now in the trailers below.

Breath of the Wild 2

Yes, you read that right! If you’ve been down a mine for the past week, Nintendo Direct ended with a short trailer of Breath of the Wild 2. The dark Hyrule corruption from the first game is back with a vengeance, and Link has a number of new skills to hand to fight back, including phasing through a floor while the music sounded like it was playing in reverse. By the time the short trailer ends, Hyrule Castle has been raised into the sky, and a number of high-flying areas above the world have been revealed. With a sequel in the mythos of Zelda, how will they introduce a new world to explore, and not just have a copy of the previous game’s world? We will have to wait until 2022 at least to find out – but at least there’s a window now.

That was the week in RPGs – mostly of the JRPG variety. E3 has been fun, hasn’t it? If we missed anything let us know in the comments below, and we’ll see you next time there’s enough new RPG trailers in a short time to make a little list about it.

The World After Review (PC) – The Hills Have Sci-Fi
The LEGO Movie 2 Videogame Review – A Different Type Of Build
The Finger Guns Podcast Ep.90 - How To Improve The Switch