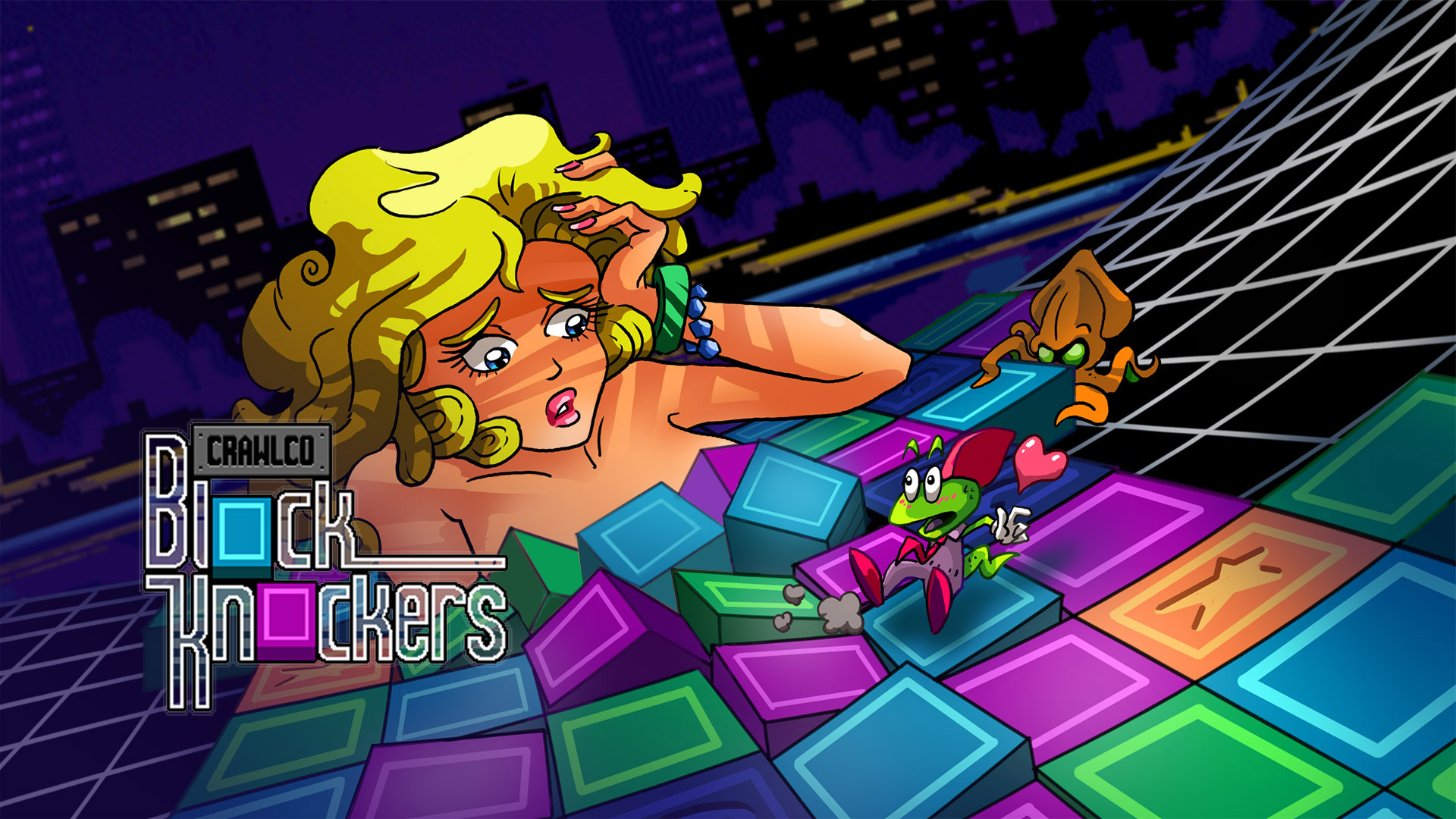 It’s almost a shame that some eroge, “fan service” and lewd games pitch themselves where they do. Some of the Senran Kegura games, for example, have high quality game play but their pseudo mature content limits their audience. Crawlco Block Knockers is a prime example of this. This puzzle game takes the moment to moment play aspects of the 1980’s classic Pengo and uses them to create a new type of puzzle game that’s quite fun to play. Unfortunately, that’s all built around unveiling lewd images which will either turn you on or turn you off entirely.

In Crawlco Block Knockers you play as the newest employee at Crawlco, a shipping company. The player character, a little Jiminy Cricket looking thing, is recruited at the busiest time for this company which ships boxes of various colours for unknown reasons. The contents of these boxes are unknown (but do lead to a fun little gag at the end of the game). It’s what the player has to do with these boxes that forms the main game play cycle.

At the start of each standard level, an outline of an image is presented under a grid. To unveil this image, the player must pull and kick randomly spawning blocks over this outline. What’s more, those blocks must be in groups of the same colour. Once 3 or more blocks of the same colour come into contact with one another, they fix their position and unveil the image below. The aim of each level is to combine groups of these blocks against special blocks (or the edge of the screen) to reveal a target percentage of the whole board. Focus your attention on the target outline and you’ll be rewarded with higher points (and a gallery image to view afterwards as the bonus for revealing the whole silhouette).

That image below? It’s always an anime woman (or women) in various states of undress. Each of Crawlco Block Knockers 9 standard levels has 3 rounds with the woman getting more and more naked with each round. The first round is fully clothed and by the third round, there’s bare breasts and provocative poses. There’s no genitalia on show here. That information may be a pro or con to you. No judgement here.

The blocks that spawn on the board act like coloured squares of ice. They can be pulled (but only if you can reach the direction you want to pull from) along the horizontal and vertical grid lines. To push, you can kick blocks and they’ll travel in whichever directions they’re forced until they hit something. Similarly, if you’re dragging a block and press the kick button, you’ll leapfrog over the block and send it in the opposite direction. All of these moves are useful but doing them in the right order and with enough space around you is the task. If you happen to close off a part of the board by matching up blocks, or surround a block without matching it, you’ll make clearing the whole lewd image impossible. It’s quite a thoughtful puzzle game that uses some ancient mechanics in ways they’ve not been used before.

Much like Pengo, Crawlco Block Knockers spices up proceedings with some enemies that patrol the play area. In this game, they’re pitched as beasties that have made their home in the Crawlco warehouses. These foes come in a variety of flavours from a crawling bot that walks along the insides of the play area to springs that bounce straight across the level and bots that shoot laser blobs at the player character. If the Jiminy Cricket-looking thing gets hurt by these enemies, he loses a life – but these adversaries can help too. If you squish them against a pre-matched surface with a block that has been kicked, they explode outwards and match a few more blocks too. You have to be careful with this as it’s not the most predictable game play element but it’s a risk rewards system that adds a little more complexity to play.

If the player character loses all of his lives, it’s game over. That doesn’t really mean anything in Crawlco Block Knockers though. You simply get to start the level over with a new set of lives. In fact, this game is so set on getting the player the titillation it holds just beneath the surface, you can even turn the enemies off in the start menu. This makes the game very simplistic for those that are here for the breasts and nothing but the breasts, you’ll get an easy ride here.

The only real challenge in Crawlco Block Knockers are the boss battles. These appear every 4th level and each is unique. The idea of each of these is to hit the boss robots with blocks that spawn on the level as they do normally. The boss has a health bar that will depelet each time it is smacked but doing so can be tricky. One boss patrols the top of the screen but uses pincers to split the lower areas and then shoot out lasers. Another splits itself into multiple pieces that then zoom in and out of the level. The last is basically a bullet hell level. These bosses are a welcome break from the puzzle solving and while it can feel clunky to use the block kicking in an action puzzle setting, the boss battles are a highlight of Crawlco Block Knockers.

And now, the bit I’ve dreaded writing. The nudity. I’m not a prude. I certainly appreciate the female form but I’ll be honest, anime eroge just doesn’t do it for me. It doesn’t float my boat. That goes doubly for the naked cartoons in Crawlco Block Knockers because some of them are really poor. Some nipples look like curled pepperoni and some of the figures look like Betty Boop turned to OnlyFans to revive her career. I certainly won’t judge you if you’re looking to pick this game up to get your rocks off but personally, I can think of quite a number of ways I’d prefer to do that than looking at rank average images of cartoon women.