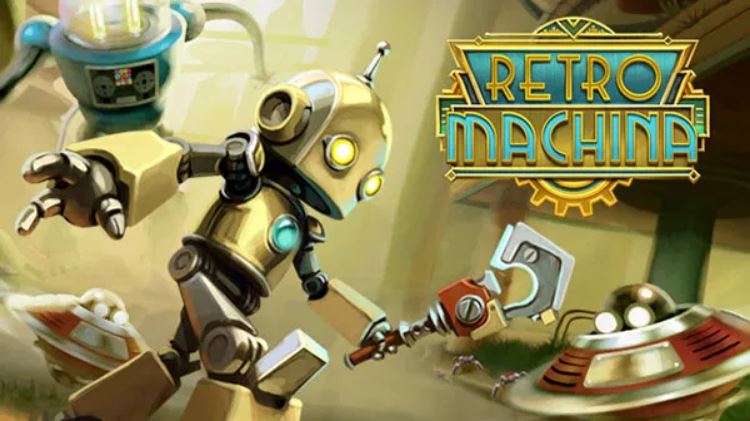 A 3D metroidvania with robot-slaving puzzles, Retro Machina is out now on all major systems. But is it charming robot fun, or a hard pass? The Finger Guns Review:

A 3D metroidvania with robot-slaving puzzles, Retro Machina is out now on all major systems. But is it charming robot fun, or a hard pass?

How would you like to explore a beautiful utopian city where your every whim is catered for by an army of robots? Sounds great, sounds Bioshock. Actually that’s a bad thing. Who’d actually want to live in Rapture? Alas in Retro Machina all the humans are long gone, and you can’t visit, not unless you want to take on said army of robots that remain. What you can do is guide one plucky little Clank-lookalike around the remains of this once proud utopia in an isometric Metroidvania, with fun combat and plenty of robot-slaving puzzles.

After developing a system malfunction while gazing at the natural beauty of a simple butterfly, a little nameless robot (who looks like the cousin of Clank from Ratchet and Clank) is chased out of the utopian robot city of Endeavour, under threat of their memories being erased for the good of the city. Enforced homogenisation is the way this Utopia is run, and the thought police don’t brook with corrupted minds high on nature. Little robot barely escapes intact, fired out of a cannon, out of the sealed utopia and out into the wildlands beyond.

The poor thing thinks they really are corrupted, and sets out on an ill-conceived quest to repair his damage processors and return to Endeavour. Let’s hope he discovers the truth, because being repaired means losing his individuality and becoming once more a part of the machine. It’s a little like Abe’s Oddysee, the cog in the machine, realising they are a cog and then exploring the world, gaining perspective, before returning to bust up the joint.

So the premise is nice. But don’t expect much in the way of twists and turns in the narrative. Retro Machina is a metroidvania and most of its runtime is concerned with finding the next item or skill you need to progress to the next area, or reach that little place you can see but can’t get to. There is a prologue area in the Nucleonics repair facility, before you are tasked with finding a way back to Endeavour, and the couple of batteries you need to get there. Each battery is at the end of a huge sprawling level, full of other robots, crumbling edifices of former glory, and puzzles. The game consists of three of these large areas and each will take a good few hours to get through.

In each large sprawling level, you need to gather four keys and four floppy disk drives, to open a particular large door at the end of the level, each item of which is behind yet more doors that lead to other doors, that guide you to lifts that open doors that lead to the place you started at but now with a key. You know how metroidvanias work, right? There’s plenty of shortcutting as well that feels a little Souls-like, but that’s pretty much the only comparison to that genre. Moving on to the next two large levels it’s more of the same, only everything gets more complex.

As it’s a Metroidvania, Retro Machina gives you a couple of upgrades as you go. You have a trusty spanner for knocking bolts off robots in your way, and you’ll gain a jet pack that opens up masses more of the map. There’s also a large portion of the puzzle design devoted to ‘slaving’ other robots. Little robot can use a radiowave emitter skill to control other robots in the vicinity, and them get them to do their bidding. You can often control both yourself and the slaved robot simultaneously with each thumbstick. To begin with this is simple spiderbot control, guiding your little helper through tunnels you can’t fit in, but soon these puzzles become more elaborate and brain-taxing as you need to traverse larger and larger areas. Robots can stand of pressure pads, or move floating platforms, or pick up large batteries and power gates and doors for you. It’s really a lot of stuff we’ve seen plenty of times before, but it’s done with great simplicity and skill.

Though almost any robot can be slaved, there’s also plenty who are out to get you. Large bipedal things who can punch and knock you about, rotating buzzsaw droids, robots that fire projectiles, and others that run in and repair the ones you’ve already damaged. There’s bosses too – a main one at the end of each level, and a few mini ones, often with a lot of dangerous tentacle arms. A favourite of mine were the samurai bots, who could lunge forward at incredible speed for one huge-damage katana slash but then needed a moment to recharge where you could punish them.

All you have is a little wrench and a dodge command, but somehow within that you have most of what you need to survive. Combat is a bit on the simple side, but it’s all about timing with a few frames of invulnerability in your dodge for example, and lots of enemies with a pattern to learn. You will find upgrades as you explore, extra health, repair fluid, and increased damage output, as well as a handful of higher damage special moves. As with much of the rest of the game, its not very original but it’s done with a certain amount of satisfying flair.

Every locale in Retro Machina has a sort of Rayman Origins, almost pre-rendered background quality to it. The areas are lovingly designed and the world is like the great Jules Verne-esque cities of Bioshock or Dishonoured only now crumbled as their time came to an end. Stained glass windows, high-fluted pillars, lots of chrome and statues. Everything has been taken back by nature, overgrown, and the only place that survives is the supposed Utopia of Endeavour. It’s all a crumbled empire, Art Deco height of design, fallen into disrepair. Hence the Retro in Retro Machina. It’s also true isometric in terms of design, a term that’s banded about too much these days with a floaty meaning. Isometric is like Supermassive Games output, Transistor and Hades, and truth be told, Retro Machina does play like Transistor might have been an inspiration.

Retro Machina’s soundtrack is a poignant mix of minimalistic chimes, and simple repeated refrains, evoking the lost world of the game. If you’ve ever heard a Simon Stalenhag album, this feels like that with some orchestral overtones – a bit like the Tales of the Loop soundtrack on Amazon.

It’s a shame that my progress with Retro Machina was abruptly halted on PS4 by a game-breaking bug in the code – not a nice one that makes little robots question their existence, but a bad loading one that meant I couldn’t go any further. In the second main area, some 6-7 hours in, a particular battle loaded badly, I died, and then each time it reloaded from that checkpoint, the game would freeze. Metroidvanias may be sprawling, but often progress is often linear once you have found the next area, and this bug meant all progress halted completely. It’s worth saying that Retro Machina’s trophy support is also not working at launch, and still not some five days later.

Retro Machina is a charming and well-constructed Metroidvania about a little robot who dares to question its existence. The beautiful graphics and crumbling art deco world will impress, and its fun but challenging combat and robot slaving puzzles will keep many players satisfied for the entirety of its 10-hour run time.