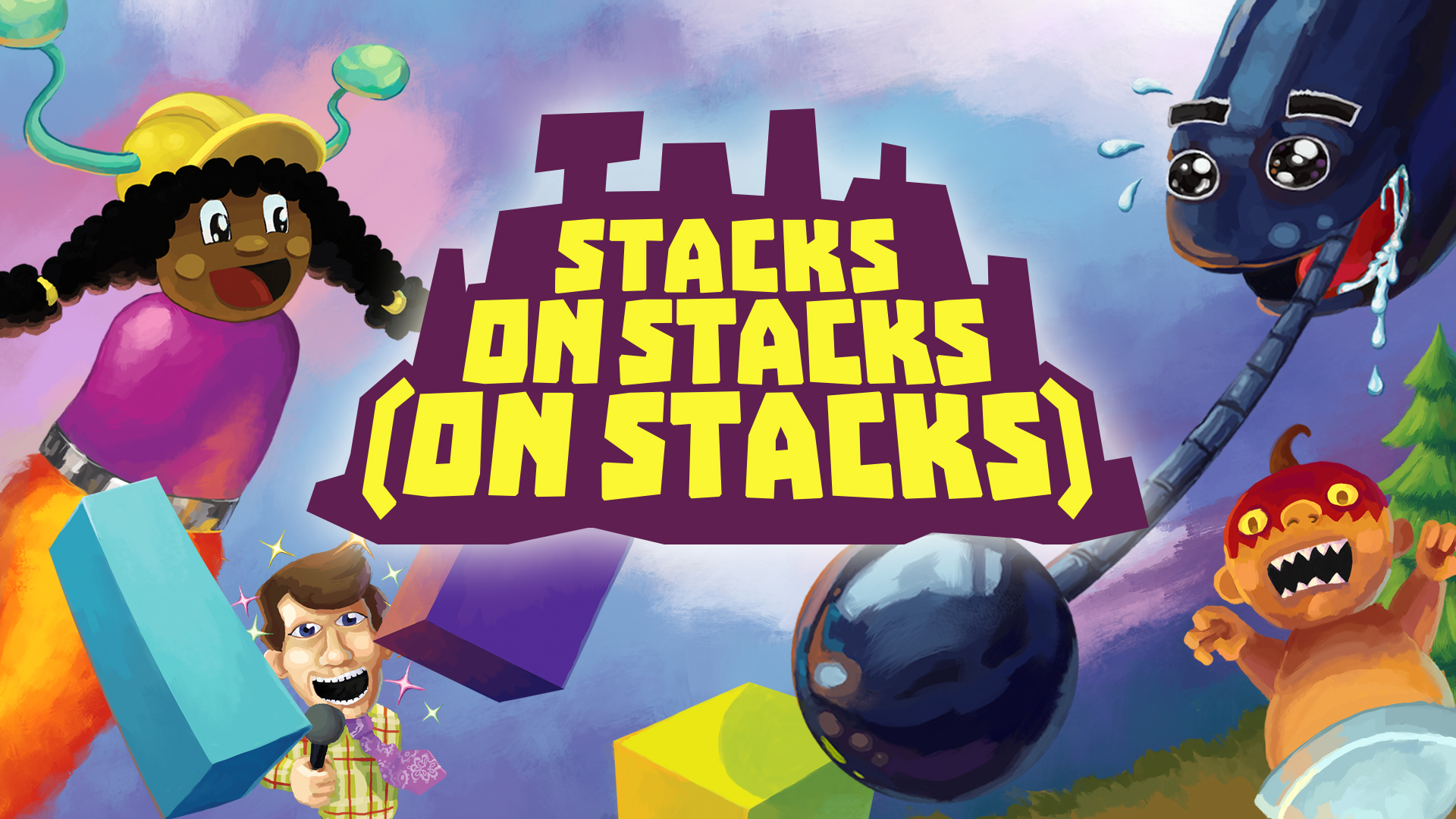 A physics puzzle game about stacking stuff, Stacks On Stacks (On Stacks) finds a natural home on Nintendo Switch. The Finger Guns Review.

A physics puzzle game about stacking stuff, Stacks On Stacks (On Stacks) finds a natural home on Nintendo Switch. The Finger Guns Review.

Some of the very best and most iconic video games are built on simple premises. Pong. Tetris. Space Invaders. The list goes on. With some intelligent games design, mechanically simple and pared-down games can be an utter joy to play.  While it’s not going to join the annals of gaming history like the aforementioned titles, Stacks On Stacks (On Stacks) is one such game that takes a simple premise and wrings every drop of enjoyment out of it. It’s a game about stacking things on top of one another. Sure, it’s more than that, but at its core this game is about putting things on top of other things in order to build towers and then hope it all doesn’t fall over.

During the single player portion of Stacks On Stacks (On Stacks), you play as a “Master Stacker” called Rockit. Magical portals have opened up and are dropping blocks and weird items all over her colourful, wacky world. It’s up to Rockit to guide those objects to the ground in a safe and orderly fashion at the behest of a bizarre cast of characters including a sentient avocado wearing a beret and a rainbow . It’s a simple framing that doesn’t burden this game with narrative where it isn’t needed. The game play is centre stage here as, aside from a few barely animated slide cut scenes, that’s all the story you’ll get or require.

Each stage of Stacks On Stacks (On Stacks) begins with a platform at the centre of the screen. Blocks of varying sizes and dimensions then start to descend from the sky. It’s the players job to guide these blocks – using the thumb stick to guide the position and the shoulder buttons to rotate them – safely onto the platform. Once they’ve floated low enough to touch something, physics takes over. Land them on a stable, flat surface and they should stick the landing. Should these blocks fall from the platform onto the surrounding floor – maybe because they land on a slant or because what’s below it is unsteady – you’ll lose a life. Lose 3 lives and you’ll fail that particular level and have to start it again.

The levels in Stacks On Stacks (On Stacks) are separated into various lanes across an over world map. Each lane on this map represents a different challenge with a unique objective. To begin with, the idea is to stack the falling blocks in order to make a tower of a desired height. The target height gets progressively higher, increasing the challenge as you progress. In other branches of the map you’ll be tasked with stacking a set number of blocks on a platform while keeping them under a particular height threshold. In another lane, the platform takes the shape of a 2 sided scale – weight applied to one side of the scale rises the alternate side and vice versa. One series of levels has small but numerous platforms to drop blocks on while another’s is slanted. There’s some ingenious use of the block dropping concept across a myriad levels that are constantly offering up a new way to play with the same mechanics.

Just like when the tower falls in a game of Jenga, this game knows that the blocks falling is all part of the fun. When you successfully manage to fulfil the objective of a level, a wrecking ball descends from the sky. You can then swing it to smash down your tower. After the more challenging levels, this is a fun and cathartic release.

During each level, you’ll also get at least one unique event. These are trigged by a dice that randomly falls from the sky just like the blocks. Each side of this die represents an event and which ever is facing up when it stops moving is chosen to start. These events are all very different from one another; In one event, you take control of a frog that has to jump around your block-based construction to collect coins while in another, a baby’s play blocks fall from the sky. In one you’ll have to use a shield to protect your tower from falling fireballs and in another, you’ll take control of a turret on your tower which has to shoot ghosts that are approaching. If you perform well during these events, you’ll get a reward in the shape of a helpful object. For example, place the golden pyramid atop a stone pyramid to complete the illuminati symbol and it’ll create a new platform to use. Fail and you might be penalised by a difficult to stack object.

The simplistic core mechanics and challenging objectives combined with the charming, charismatic flourishes like the events make for a really compelling experience. Stacks on Stacks (On Stacks) has a decent amount of content for its price – 36 levels clocking in between 8 and 10 hours to complete, depending on your skill level I imagine.

For those who want a real challenge, each level has optional objectives that push the player to complete the level quickly. Hit these targets and you’ll be rewarded with coins. This currency can be spent at shops to buy customisation objects for Rockit. This includes clothes, glasses, head gear and more. If you’re looking to 100% this game, there’s many more hours of game play available here as some of the later stages are devilishly difficult to complete quickly.

Some games are simply better suited to certain platforms and I certainly think that’s true here. The structure of this game and its pick up and play nature means its brilliant for a quick 15-30 minute blast of gaming on a bus journey. I enjoyed my time with Stacks on Stacks (On Stacks) when I played it on Stadia but have found it much more accommodating on the Nintendo Switch because of its portability (and lack of requirement of an internet connection – something that can’t be guaranteed around my home town).

What’s more, the game hasn’t lost much at all in the port from PC/Stadia to the Nintendo Switch. While this version is the least visually impressive (especially in handheld mode), the differences between the Switch version and any other version are negligible during single player.

In multiplayer – which can be played in either co-op or versus – the screen can get a little too busy and some of the finer points (like the very subtle and slow lean of a block half way down your tower, the first sign you’re about to have a huge collapse) starts to get lost. I’d highly advise playing the multiplayer on a TV rather than in handheld mode as the Switch screen just isn’t big enough to keep all the action on screen in a legible fashion.

Stacks on Stacks (on Stacks) is an excellent example of taking a simplistic core concept and mechanics then using them in a plethora of inventive ways to create an enjoyable experience. It’s colourful and quirky yet easy to pick up and very intuitive. The Nintendo Switch feels like a natural fit for its structure, built up around short bursts of play, but the multiplayer is a little too much for the handheld consoles screen at times.

Stacks on Stacks (on Stacks) is available now on Nintendo Switch (review platform), PC and Stadia.