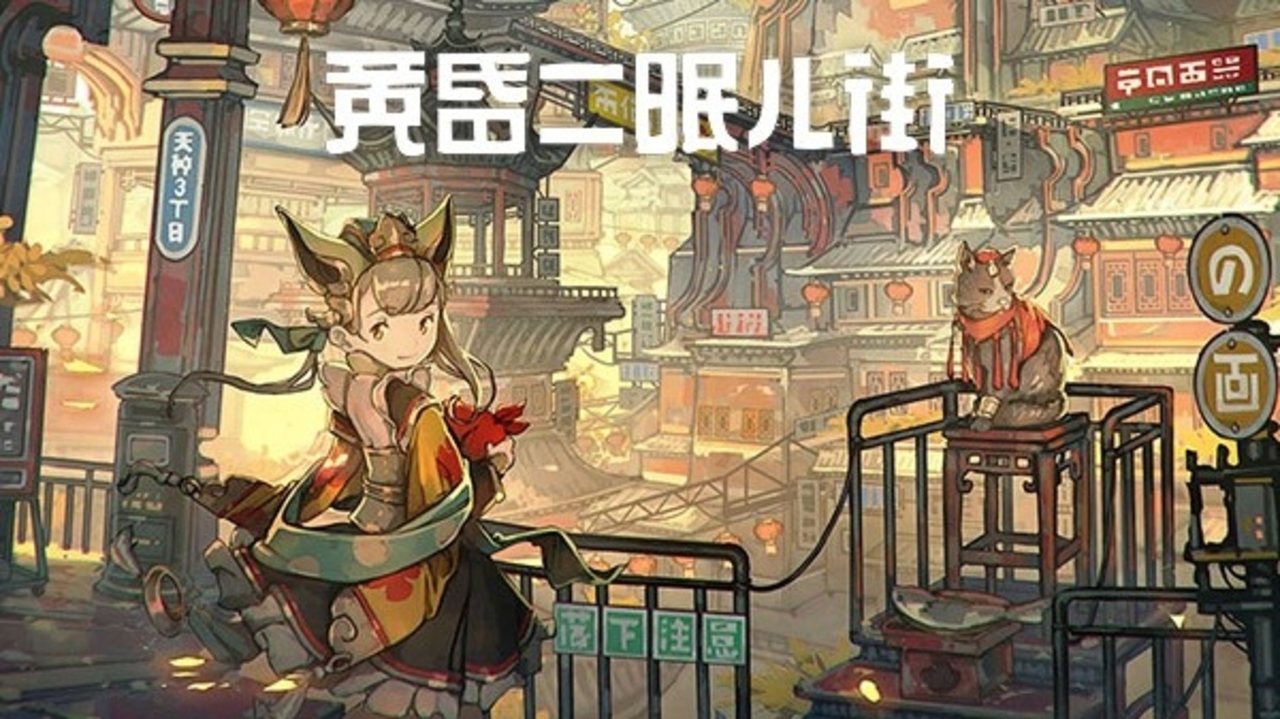 I’ve been doing this review malarkey for nearly three years. I’ve reviewed more styles of games than I would have played otherwise and as such, have broadened my horizons somewhat. It’s led me to be more open-minded, more receptive and less dismissive. So, when Tasomachi (I’m not capitalising it throughout the review) landed, and Toby couldn’t run it on his PC, I thought I’d give it a spin.

It looked whimsical, a stylistic cross between the aesthetic of Genshin Impact and Phantasy Star Online. Cutesy, doe-eyed characters against a mystical, cartoon-like landscape, reminiscent of what Disney assumes gamers think of Chinese fables. But of course, looks can always be deceiving…

Get underneath that veneer of cute charm, however, and you’re in for a whole another experience. One of awkward platforming, distracting graphical pop-ins and much more that don’t make it a particularly fun game to review. Shall we find out why?

This vibrant adventure puts players in the shoes of Yukumo (above), who journeys across the land in an airship. Not quite Zeppelin sized, more a one-man device that wouldn’t look amiss in Da Vinci’s sketchbooks.

After a short flight introduction, Yukumo comes across an island formation surrounded by a mysterious fog. This, as you may expect from any fantasy game, is no ordinary fog. Sure enough, it damages our protagonist’s dirigible and strands her on one of the islands. It’s here that she’s told what’s up by a [somewhat typical] chibi cat-like thing.

Turns out this mist is making everyone’s lives miserable, cutting off access to other areas and generally being a massive inconvenience. As I say, this is fantasy fog, not your normal precipitation that just dampens your moustache and makes your hair frizzy.

It doesn’t really explain how or why the fog is there, though. There’s no elaborate, fifteen minute Final Fantasy-esque framing device to set the scene. It would be nice to know why this particular area was affected, but nope. You’re just the convenient, silent protagonist that’s landed with the burden of helping.

As Yukumo discovers, through non-voiced dialogue, the answer lies in reaching a sacred tree. Well, the sacred tree in that area, at least. Acting as a deeply rooted dehumidifier, each tree will magically dissipate the afflicting fog, allowing Yukumo to progress.

Now, that’s a very generalised way of looking at it. Of course, Yukumo can’t just expect to walk into each area and be done, otherwise there would be little else to do. Instead she must find a prerequisite amount of an item, the Sources of Earth, that allow access to each chamber.

These Sources are characterised as lanterns, orange and floaty ones, that are dotted about the various locales of the town(s). It falls upon us, as the Nezu Tribe (the cat-like things) presumably can’t reach them with their stubby little legs. At least, that’s the only reason I can see why they’d need us to help. There doesn’t really seem like much demand or pleading on their part, except for “because the plot demands it”.

So, barely-explained plot device in hand, it’s down to Yukumo to hop, float and slide about the land collecting lanterns. If only it were as easy as I’m making it sound…

Getting Sora Feet From This Platforming

Once you get past the enchanting music and the camera pans that set the scene (which strongly reminded me of Beyond Good & Evil), you get to control Yukumo. Unfortunately, this is where my immersion started to come loose. If you hadn’t twigged from the analogy in the header above, controlling Yukumo is like playing Kingdom Hearts.

Actually, to be slightly more scathing, it plays like a beta test of Kingdom Hearts. If you’ve either played one of Squaresoft/Disney’s convoluted messes, you’ll know how awkward it is platforming with Sora. If you haven’t, then let me tell you this: JRPG’s and platforming are not a good combination. It didn’t work in Xenogears, it wasn’t much improved in Kingdom Hearts.

Yukumo doesn’t seem to have any real connection to the ground she’s standing on. She doesn’t quite slip around like Bambi on ice, but it’s not far off. There’s a strange, “floaty” sensation to movement, like you’re guiding a torso around and the legs follow, if that makes sense? I’m not asking for realistic Nathan Drake/Lara Croft levels of platforming finesse, but I’d like to actually feel like my character responds accordingly.

Which isn’t great when a fair bit of this gameplay is navigating narrow walkways, awkward jumps and precision platforming.

The Source Of My Frustration

By this point, you’d not be wrong in thinking I’ve made Tasomachi sound like a cute, Eastern platformer. In some regards, it is: you jump on platforms and collect various plot contrivances. However, the word “platformer” draws comparisons to better games like Super Mario 64 and Ratchet & Clank.

Yet it has neither the charm of the former or the challenge of the latter. For example in Mario 64, some stars are hidden in plain sight whilst others are a bit more devilishly obtuse. Half the fun is in figuring out how to either reach or unlock them. In Tasomachi, however, they’re all painfully obvious to see yet really awkward to reach. One is wedged between two wooden platforms, with no visible way of either separating them or breaking the top one to land between them. Coupled with the aforementioned loose jumping/traversal mechanic, it makes for frustration trying to work out how to get to it.

Ratchet & Clank, or any other platformer of that nature (Jak & Daxter, Klonoa, etc) has challenge in that there are enemies to overcome. Some games border on challenge/reward by being either too easy or difficult with their enemies, but not Tasomachi. There are no enemies to combat, which takes away any real challenge. Removing any enemies or threat just takes away the impetus to rid the town of fog, which ultimately makes you wonder why Yukumo needs to help at all.

Anyone else would have said, “Sod your floating lanterns, I’m getting on a boat”. She’s not trapped, unless she’s emotionally attached to her airship. There’s literally nothing stopping her going back the way she came.

The Beauty Is Just Popping… In

It may sound like I’m being unnecessarily cruel to Tasomachi, but it’s not without merit. What good parts there are get massively outweighed by its issues and flaws.

For example, the game looks beautiful on its introduction. The music is up there with Kow Otani’s Shadow of the Colossus score, or on the same level of whimsy as any Shenmue soundtrack. It’s honestly quite enchanting, like you’re being immersed in a fantasy world. But then, the lack of voice acting and really abrupt text, like above, takes you right back out of it.

Similarly, the art style is a delight. It’s not graphically intense, but of a subtle kind of awe as you take in sweeping camera pans of the areas. Which would be majestic… if the effect weren’t ruined with graphical hitches and loads of texture pop-ins.

This may be patched over time (as I’m playing pre-release) but that shouldn’t be something to gamble on. Players might have a better experience after launch, or they could also suffer the same issues I did. It’s not something that should be risked when purchasing a game.

The thing is… I want to recommend Tasomachi. I want to, but I can’t wholeheartedly say you’ll have a great time with it. For me, I had fun by attrition. When I got into a rhythm of collecting Sources and unlocking new areas, it was nice taking in those vistas and the sounds. It’s just when that stops and you’re only a couple Sources away from progressing, and they’re out of reach, that’s where the frustration kicks in.

Barring some extra platforming challenges (which is the last thing this game needs) and costume changes, there isn’t much to Tasomachi. It feels akin to a pseudo-spectacle game: you’re playing a whimsical “experience” rather than a game with any substance to it. Again, maybe there will be some depth added down the line, but that isn’t helpful to me reviewing it now.

It’s by no means a terrible game, regardless of its few technical issues. The comparison I can draw is to Death Stranding, in that I might like it and you’ll hate it. Or it’s something I’m not seeing, but you absolutely love it. For me though, guiding a mute, expressionless anime doll through banal platforming just doesn’t do it for me.

There’s whimsy, charm and delightful music for those that want it. There’s just little else outside of its bare plot and awkward gameplay loop to convince anyone who wasn’t on board before to invest.

Whilst it captivates with its beautiful aesthetic and whimsical score, TASOMACHI: Beyond the Twilight offers little else. Awkward platforming, directionless plot device and lack of any real substance leaves little to the imagination, let alone drive to continue.

TASOMACHI: Beyond the Twilight is available now on PC (reviewed via Steam code).

The World After Review (PC) – The Hills Have Sci-Fi
Fight Crab (PC) Review – We Don’t Talk About Fight Crab
Travis Strikes Again: No More Heroes Review – Has Suda51 Struck Out…?