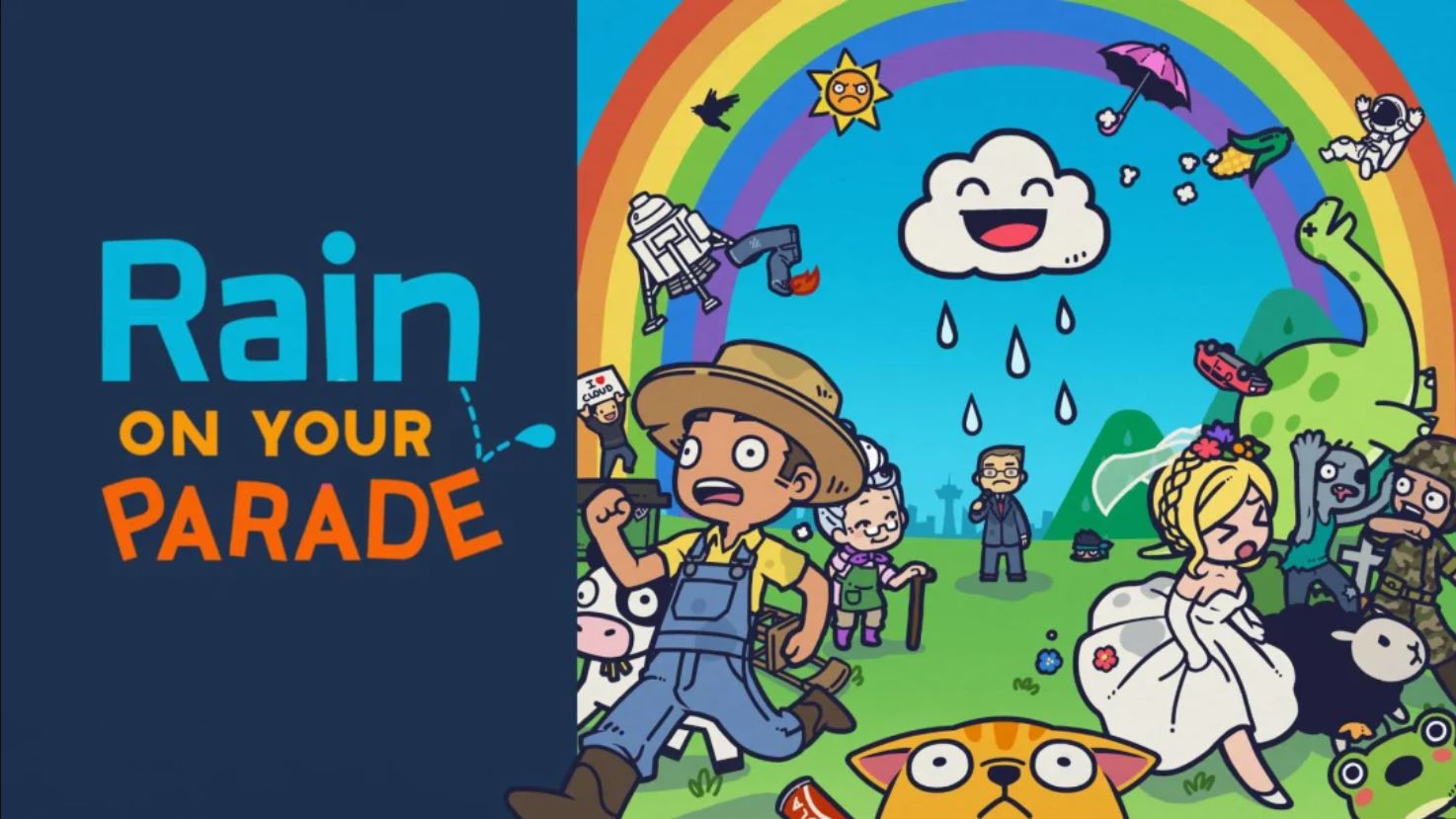 Ruin a wedding, disrupt a school and defeat your nemesis in Rain On Your Parade, a mischief simulator from Unbound Creations. The Finger Guns Review.

Ruin a wedding, disrupt a school day and defeat your nemesis in Rain On Your Parade, a comedy mischief simulator from Unbound Creations. The Finger Guns Review.

In 2019, one game caused the whole gaming industry to honk with excitement. That game was Untitled Goose Game. A title that bottled mischief and channelled it through stealth and puzzle mechanics, it proved to be a hit. It even won a BAFTA. I was personally hoping that the success of that unnamed Goose would inspire a wave of games in the same vein in which you play as a miscreant anti-hero simply being a nuisance. Rain on Your Parade from Unbound Creations feels like the first game since Untitled Goose Game to really live up to that concept.

In Rain On Your Parade, you play as a cloud. Unsatisfied with not being able to rain on whatever it wants, whenever it wants, it sets out on a quest to reach a fabled land where it rains all the time. That place? Seattle. In order to reach this mythic place, the cloud (known as Cloudy to its friends) has to progress through 50 levels across a hub world map.

Each stop on this map represents its own challenge built up around a core series of systems. The cloud can drop rain onto anything below that’s covered by its shadow – but as it does so, the cloud loses water. In order to restore its water st(r)atus it can hover above bubbling fluids which will fill it back up again. It’s not just water that can be absorbed either. Acid, oil, paints, toxic waste and more can be found and absorbed throughout Rain On Your Parade and each does something different when rained back down onto the world. Every so often, the cloud also gains a new ability – lightning, snow and a tornado – which deepens the game play layers.

Most levels of Rain On Your Parade begins with a shopping list of activities which will award the player with a ‘star’ once completed. Some activities on these lists are mandatory in order to progress while others are optional and sometimes secret side quests that unlock cosmetic items. Much like Untitled Goose Game, the aim of this game is to explore the area, experiment with the mechanics and complete the required activities.

Ruining a wedding by soaking every guest. Destroying everything in a warehouse by absorbing oil and then leaving a trail of flammable precipitation between an open flame and shelves full of crates. Extinguishing all of the camp fires at a camp site. Knocking all the “hoomans” off a mountain after freezing them with snow. Trashing an upmarket restaurant by filling a mixing bowl with water from a mop bucket then shocking it to life with lightning. Rain On Your Parade is chock full of mischievous activities to get up to that are fun to uncover and cathartic to execute.

There’s a hand full of levels that take a different structure too. Some are like mini-games; there’s bowling and timed rampage modes which track high-scores rather than star awards. Others are tower defence levels which test the cloud to use their meteorologic moves to fend of waves of attackers. There’s also a series of boss battles against the cloud’s nemesis Doctor Dryspell. These involve overcoming a series of ever more challenging courses packed with cloud tracking turrets. The variety of game types and activities in Rain On Your Parade is impressive. What’s more, this game uses many of its design ideas just once and never returns to them, keeping all 50 levels fresh.

A single level in which you’re raining down slices of bread in order to guide a flock of pigeons. One level about raising then guiding a flock of zombies through a city. A single level about ending the dinosaurs with meteors. This game takes an idea, does the best it can with it and doesn’t stretch it any further.

There were less than an handful of moments throughout the entirety of Rain On Your Parade that felt even mildly frustrating or boring. This is a game designed around providing fun, smiles and cathartic roguery. It delivers on all those counts.

The Snow Must Go On, Rain or Shine

Rain On Your Parade doesn’t just rely on its own mischievous humour to get by. It also leans heavily on some pop culture references to both its benefit and detriment. Some of the levels are parodies of popular games, TV shows and movies. One level is a stealth mission with the aesthetic of Metal Gear Solid’s opening section complete with codec conversations. Another level is an accurate recreation of the office from The Office in which you are tasked to recreate some of the iconic moments from the show. Most of these parodies are really well put together and enjoyable to explore. There’s some particularly hilarious forth wall breaking in Rain On Your Parade which I don’t want to spoil here.

While the majority of it does, not all of the humour lands. There’s one parody level that tries to replicate a stage of Breakout that’s one of the weakest in the game and the largest stretch of the mechanics. There’s some pop culture references – particularly regarding a frog that tries to suggest its the same amphibian from Frogger – that aren’t particularly funny and only serve to drag out the level window dressings. There’s a few jokes that reference how tired and bloated some other games are these days – while also demanded that of the player in this game for an optional objective. It’s a smart jab at games with mundane fetch quests and unnecessary collectables but that’s all it needed to be, not a quest in this game itself.

The most divisive issue I found with Rain On Your Parade is to do with the narrative. The story of the cloud and its journey to Seattle is a story within a story. In reality, it’s a grandad telling his grandson a bedtime story about a cloud with the game play resembling the chapters of the tale. Cut scenes of these 2 characters, displayed as nothing but shadows on a wall, are played before some levels which feel like an interruption to the more interesting tale of Cloudy’s journey. This whole “tale within a tale” dynamic feels like one too many layers to the narrative and feels totally unnecessary, brining very little to the experience.

On a more positive note, this game runs exceptionally well on the Xbox One. I had concerns – there are scenes in Rain On Your Parade when lots of things are simultaneously exploding, flying across the screen with lots of physical collisions having all at once – but the frame rate stays remarkably steady. The art style is simple, smart and easy to read which makes the game very accessible too.

The prevailing feeling when playing Rain On Your Parade is that this was a game made by people having fun. That constantly shines through in the play and design. Unbound Creations might be best known for games in more serious genres but this title shows they certainly know how to make people smile too.

Almost everything about Rain On Your Parade is geared towards giving the player a good time. A mischief simulator packed with wise cracks and pop culture references, it’s a lot of fun to play. Not all of the humour lands but enough of it does to make this an easy recommendation to anyone who liked Untitled Goose Game.

Rain On Your Parade launches on PC via Steam, Nintendo Switch and Xbox One on April 15th, 2021.