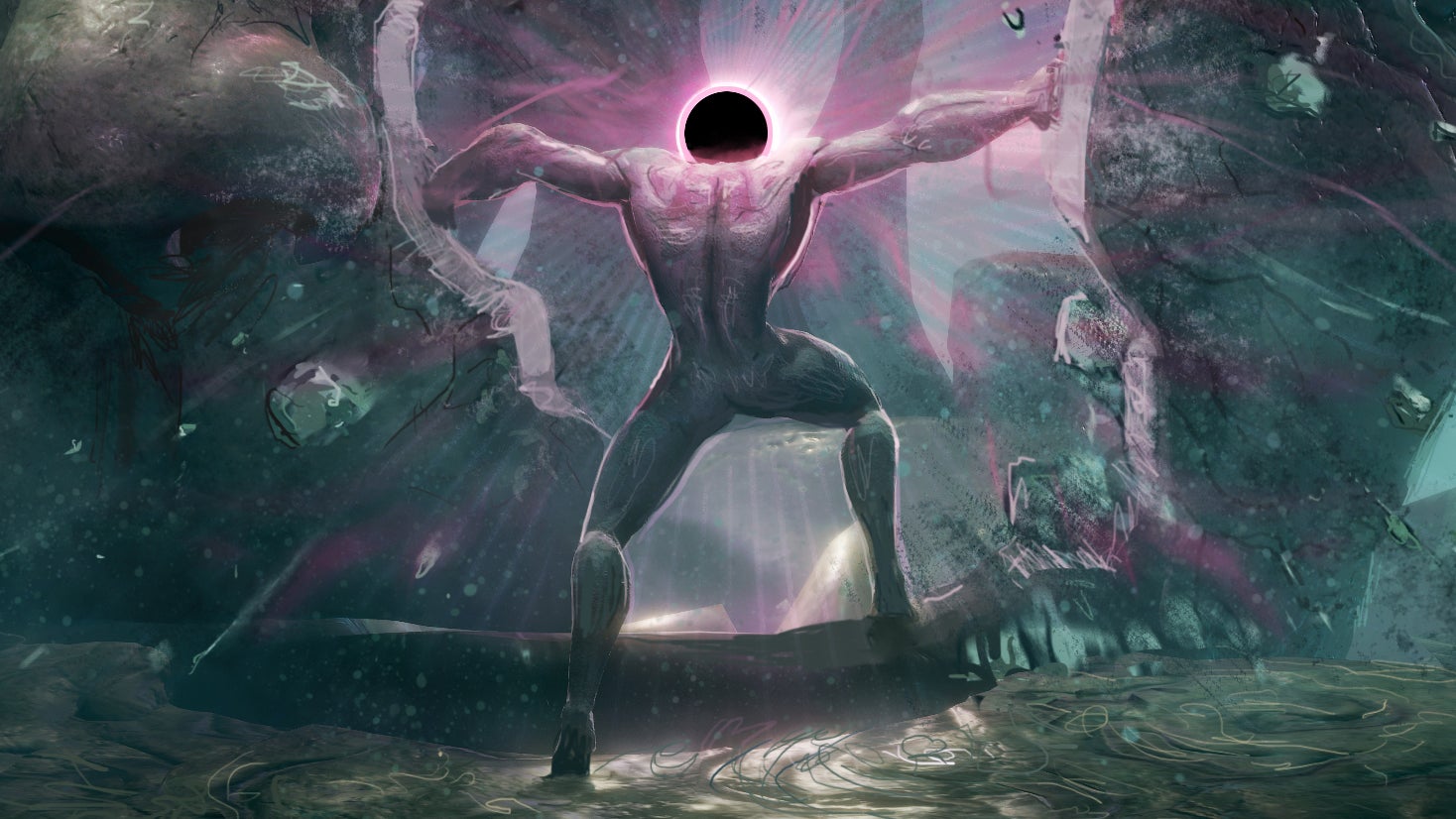 Yet another Metroidvania with an element of difficulty, does GRIME offer anything new to the genre? Well, no, but that's not a bad thing. The Finger Guns review:

First, there was the Metroidvania portmanteau: gameplay revolving around backtrack and later game unlocks for progress. Then came Soulsborne’s mash-up; the notoriety of banging your head against a wall to win. And now there’s GRIME, a game about head-trauma inducing backtrack.

Difficult action/adventure platformers aren’t a recent thing, mind. Over the years we’ve had the likes of Blasphemous, Salt and Sanctuary and Sundered singing from the same sheet. So what does GRIME do any different?

Well, besides a gross aesthetic and a new parry/healing system, not a great deal. But that’s not a bad thing, as the old “If it ain’t broke…” saying goes. It’s whether it’s any good is the critical point. Let’s find out…

Where’s Your Head At?

As is the usual wont with dark and atmospheric Soulsborne affairs, the story is very minimal. Gone are the days of just, y’know, spelling it out for you like Ghosts ‘n’ Goblins, the player has to find out the hard way. Quite literally, at times, as snippets are only gleamed through boss fight progression, or stumbling on lore texts and such.

GRIME is no different, thrusting players into a disgusting world with no more than a cursory, “You are an amalgamation of crud, off you go”. You, the player character, are a host, much like an Unkindled or Hollow from a Souls game. As The Chiseled One, complete with awesome looking black hole thing for a head, are the avatar chosen to save the day.

If that sounds pretty vague, it’s because it is. Players will have to piece together what has brought this land to ruin, what higher powers govern them, and why everything is covered in GRIME (ah, I see what the title means now).

Getting Down And Dirty

Here’s an obscure throwback for you: this game reminds me of Skullmonkeys. If you’ve played it, well done, one-of-about-ten person! For those unfamiliar with my hipster flex, Skullmonkeys was a game by the Neverhood back in 1998. It was also entirely made of clay, like a grotesque Wallace and Gromit fever dream.

The reason for that comparison is that that’s what GRIME reminds me of. Not quite claymation, but a chunky, horrible molded style of visual design. Enemies look like lurching raisins made of gunk with hollow, recessed eyes. Grotesque beasties dwell in slimy, damp caverns and hollows, waiting to strike.

Even the levels themselves have a look of grossness about them. Like someone spread muck over an Ori and the Blind Forest diorama, coating it in filth. Yet weirdly enough, in contrast, it’s suprisingly bright for a game of this ilk.

Sometimes, The Abyss Counters Back

This is the part where I talk about the combat in GRIME. Now, I know some of you are all, “Dark Souls-alike is it? Standard and strong attacks, maybe a dash/roll, hmm?”. Well… yes, these are all there, can’t make a sandwich without bread and butter after all. But GRIME adds a new element to proceedings too.

Black holes, in science-y layman’s terms, absorb matter. Don’t ask me how, I’ve never been close to one, but from what we’ve gathered, that’s what they do. In GRIME our… man, shall we say, literally uses his head to absorb incoming attacks. It sounds counter-intuitive, but there are two benefits to this well-timed feat.

First, it aides health regeneration. Not instantly, as that would make it too easy to just counter blows to refill health. Instead, there’s a charge meter that fills beside the health bar. When this is full, this can be used at any health, offering a regenerative healing amount. It adds a level of tactic: you may be low on health, but only need to absorb one more attack to fill the meter. Do you risk it, knowing you’ll be able to heal a decent amount, or continue on the hope of hitting the next checkpoint?

The second benefit is not learning the enemy’s attack by absorbing it, instead learning a passive buff to purchase over time. Perks like Boulderhead, that reduces damage, or Creep, which grants more backstab damage. There’s a counter telling players how many each “skill” needs to be absorbed, as well as the cost of said buff at the next healing stone/checkpoint.

It emboldens that risk/reward gameplay now synonymous with “difficult platformers”. For some, especially those not experienced, it can be off putting to die repeatedly early on. Yet for those familiar with the gameplay tenet, or at least have the temerity, GRIME will scratch that itch.

If you grew up with the classics, you’re in luck here. There’s a good ol’ fashioned map system to keep tabs on where you’ve been. Like a gross ant farm, players will see the networks of tunnels they’ve carved as progression throughout. Checkpoint stone are highlighted, as are the remnants of where Mr. No-Head died last time.

It might seem like an archaic notion to revel in, but that’s not a bad thing. There are times when being reminded of an era of games that paved the way is a good thing. Gamers praise Super Metroid and Castlevania: Symphony of the Night enough as it is. What’s wrong in a game that combines that, with a gross Neverhood/Abe’s Odyssey aesthetic complimenting that?

A-Head Of The Game

As it turns out, not a lot. Sorry if you were expecting some massive, praise-halting flaw here that I normally get around to in my reviews. GRIME isn’t a perfect game, but it doesn’t have to be to be enjoyable. There’s a quote that you won’t see on the accolades.

Nor is it an innocuous, cookie-cutter of a game aping a popular template. What I’m getting at, besides stretching out my word count, is that GRIME is a very good game. It’s made with that level of care that pays homage to the sub-genre that bore it. There was nothing in that made me have any particular disdain with it.

The levels are sprawling and disgusting, the plot is vague enough to want to see through (even though I won’t spoil it for you), and the bosses are varied and entertaining. In fact, the first boss made me uneasy, as it’s a multi-limbed thing that folds out of a statue head. Don’t ask why, I’ve just got a real squeamish thing about limbs unfurling from hidden places. I think it was LIMBO and the spider that set it off.

Let It Absorb You, Like A… Well, A Black Hole

To round up this short and sweet review, GRIME is a recommendation. If you’re a fan of Metroidvania’s then this one should have been on your wishlist from announcement. Even if you only dabble, off of the back of Hollow Knight and Bloodstained, this will be up your street.

I’ve kept this a short review because, frankly, telling you any more would be telling you how to play the damn game. We aren’t GameFAQS, we do reviews. I would rather feed you the necessary amount of intrigue, with accompanying picture morsels, to make you want to check it out yourself.

Be warned though, it is a very, very gross game. Not A Serbian Film gross, or anything deliberately shocking. But like its namesake, it leaves you feeling a bit icky as you play it, wanting to spur you on to clean things up.

GRIME brings nothing new to the Metroidvania tag, but it doesn’t have to. Challenging enough combat, with some RPG-like loadout elements make for engaging gameplay. That it’s gross and its bosses skin-crawling also work in its favour. If you enjoy your challenging platformers, you’ll enjoy this.

GRIME is available now on PC (reviewed on) and Google Stadia.