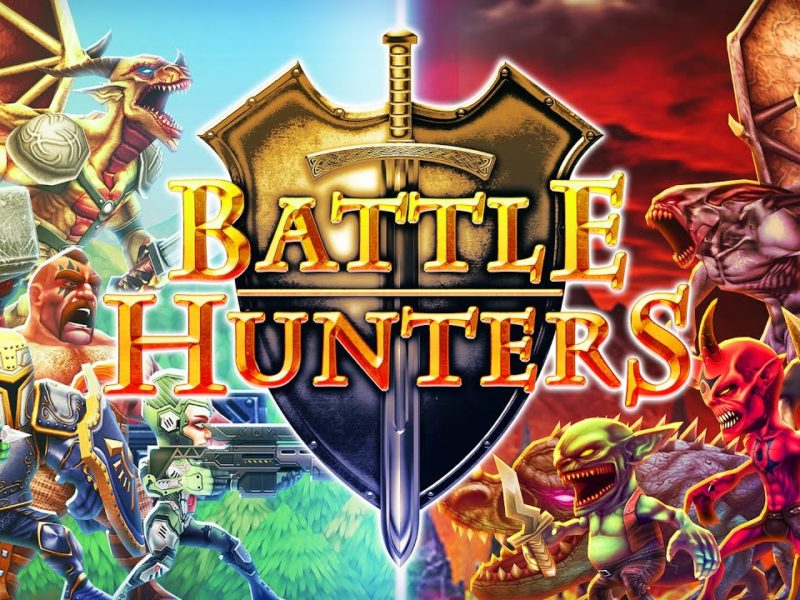 Battle Hunters Review (Switch) – The Fellowship of the Generic Name

A game that has engaging mechanics but sorely needed a more interesting narrative, Battle Hunters on Switch is an adequate time killer. The Finger Guns Review.

Let’s just address this directly – Battle Hunters has one of the most generic video game names I’ve ever come across. It’s akin to slapping a verb on a tediously linked noun to make something sound as uninspired as possible, like punch brawlers, race drivers or War Fighters (yes, a thinly veiled barb at that awfully named Medal of Honor game). What’s even weirder is that this name has absolutely nothing to do with the content of the game. Sure, there’s hunters and they do battle but I don’t think I’d describe any of the characters you’ll meet in this title as a ‘hunter for battle’. Now that that’s out of my system…

An Archer, a Warrior and a Mage Walk Into a Bar…

An ancient and unnamed evil is attempting to break free of its hold and the only thing keeping it at bay is an old, wize wizard. Using his powers, the wizard sends a spectral projection to a group of past companions to ask for help. The wizard can’t keep this evil contained forever and he needs some handy warriors ready for when the worst eventually happens. This trio – a sword wielding warrior, an archer and a mage – come together and commit to travelling across a fantasy land, defeating the monsters and beasts they’ll come across in order to reach and help the old wizard. That is the truncated version of the narrative in Battle Hunters, but to be honest there’s not a whole lot more to this game in terms of story. Little Visual Novel-esque text conversations, sorely missing any vocal work much like the rest of the game, refresh this objective in the player’s mind each time the group reach a milestone like a portal to the next world.

There’s little snippets of additional story which are delivered each time the band of merry men/women meet a new companion. Battle Hunters has a total of 28 recruitable heroes that will join the group if you meet certain conditions. A fencing swordsman is battling a group of goblins but is outnumbered. Help him and he’ll sign up. A space marine (yes, this is tonally jarring to have a space and time travelling robot man in a fantasy game but just roll with it) needs a new power source for his suit. Find and return it his battery and he’ll join the fight. Some characters just stand there and will join without any convincing. Each character has a reason to join the band but some of these motivations are paper thin and bring nothing to the narrative.

The reason you’ll want to recruit these additional 25 warriors is because each comes with their own stats, attacks and special abilities. As you progress through Battle Hunters, you’ll come across an extensive variety of monsters to battle which can be more easily defeated with certain heroes. Only 3 of the 28 heroes can be active at any one time and only those 3 will receive experience for success in battle so long as they haven’t run out of hit points and fallen unconscious. This experience builds towards levelling up and with each new level, ability points are awarded which can be spent on improving stats in attack, the potency of special abilities, amount of health and more. What’s more, inactive heroes slowly regain their health points. This means that you’re often rotating your squad to ensure your active team is healthy and gaining experience. It’s a smart system that encourages experimentation and while it can start to become a bit tedious in more challenging area’s, constantly swapping out your team for the next scrap, it’s never too time consuming.

It also needs to be said that the cast of Battle Hunters vary in quality. Some heroes are weak to begin with but get much stronger with levelling and unlocked abilities. Others are handy straight from recruitment and simply get better the more they’re used. Then there are a number of characters that are a bit useless throughout. These feel like they’re there just to make up the numbers and feel totally unnecessary because they bring nothing to the narrative or game play. The visual design of these warriors are all pretty stereotypical too, falling into tired fantasy tropes. While they’re all aligned with the same art style, some just look better than others.

One does not simply walk to the Cliffs of Desolation

Battle Hunters is presented like an isometric adventure game with metroidvania elements. The team is guided by the player using the left thumb stick, the trio of active heroes moving in single file like a heavily armoured caravan of donkeys. The game’s five themed worlds each have one large area that branches off into individual shorter dungeons to explore. Keys found in one dungeon will activate a bridge elsewhere that lead to a collectable that’ll power a portal someplace else. The group’s journey, and potential new locations to explore, are highlighted in a decent mini-map which helps prevent the player getting lost on each deceptively large above ground world.

The game world’s themselves are pretty well populated with chests to unlock, merchants to shop at, the occasional character to do a side quest for and groups of monsters to slay. For those who fancy a challenge, there’s optional dungeons to tackle which reward ability points to your party. The detail in the game world is really crisp on the Nintendo Switch screen with little details like fire flies or rain really popping against the background. I must commend Battle Hunters for being accommodating to player’s time by including a portal fast travel system. Each time you reach a serpent head statue, a new fast travel spot becomes available which removes a lot of backtracking that this game would have otherwise.

I imagine that the battles in Battle Hunters will be the most divisive element of the whole game. When the active trio of heroes wanders into a red circle, a fight begins. The tussles in this game are part turn based and part real time. Each of the active team can be given commands via a push on the Left, Up or Right action on the D-Pad. This pauses the action and opens a menu for whichever character is mapped to that direction press. Here the player can instruct that hero to perform an action such as attack a target enemy, defend themselves or use a special ability. Once they’ve completed that action, the game will pause, the menu will open and you can give them another instruction.

Or, more appropriately, it should. While this works some of the time, it doesn’t always. Some characters will complete their attack or special ability and then simply stand there. If they’re getting mobbed by a group of foes, they don’t react. They just pose there, taking damage. This means the player has to take a far more active role in monitoring what each of their heroes are doing (or not doing). On one hand, this does make the game far more engaging. On the other hand, it can be frustrating when a hero gets lost in the action on screen that can get pretty hectic and then just stands there getting stabbed to death.  Fights in Battle Hunters feel like managing a team of inexperienced teenage football players. You can’t get on the pitch yourself, shouting at them to do things works but they’ve got no initiative to do anything after they’ve done what you ask. Thankfully the game is relatively easy and there not many battles that will cause anyone any problems so long as they’re mixing up the squad as often as necessary.

Despite all of its foibles and flaws, Battle Hunters is a product that’s more than the sum of its parts. The story is paper thin and the characters could have walked in off the set of any low budget fantasy movie but I find myself losing hours to exploring the world and it’s secrets without noticing. The combat systems in place don’t work as they should but this actually makes the game more entertaining. The 28 characters feel like far too many and many of them bring nothing worthy to the table – but I find myself invested in the RPG levelling and improving the few heroes that I get attached to. There’s 15 hours of above average adventuring to be had here and I can think of a whole lot of worse ways to spend that time.

Often as generic as its name, Battle Hunters needed a far more nuanced plot to really make use of its bloated 28 strong cast of heroes. That being said, the game world and it’s combat (despite not working as it should) are entertaining enough to fill it’s 15 hour length.