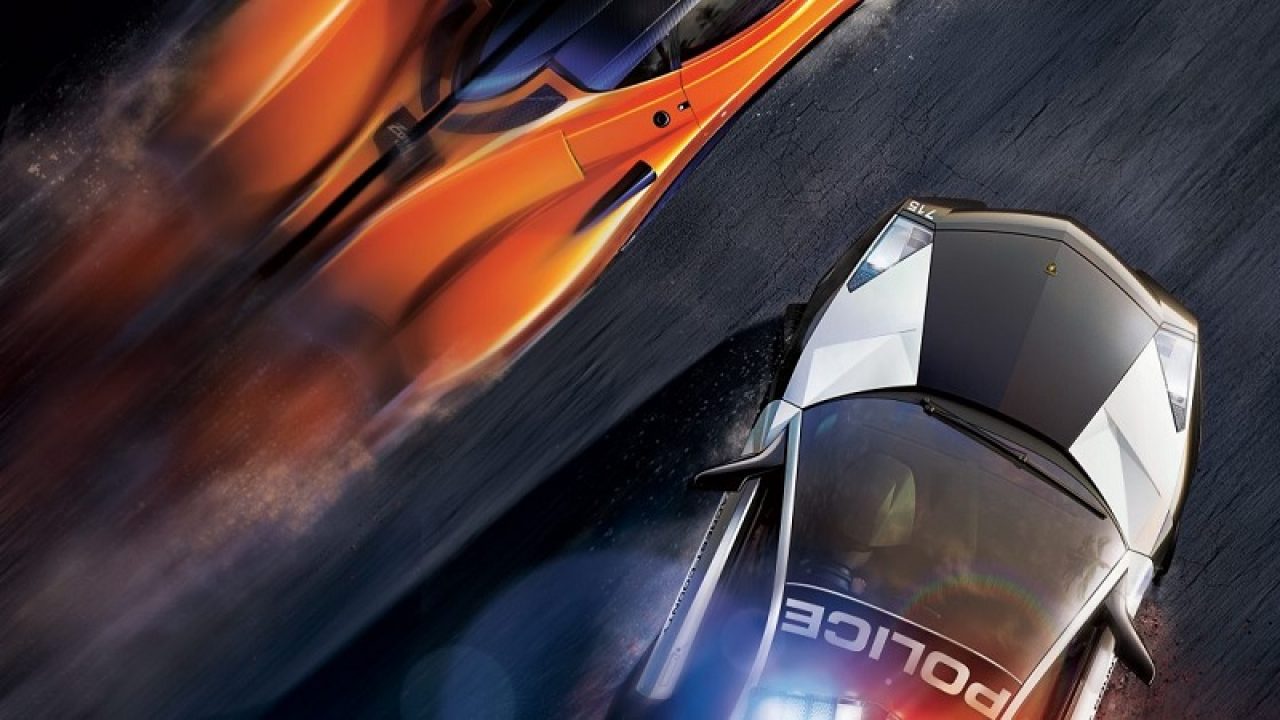 I would hate to be caught speeding in America. Well, in this game’s version of America, at least. Over here, you get slapped with some points on your license, maybe a ban if you’re lucky. In the world of Need For Speed: Hot Pursuit, however, you’ll be lucky if you don’t end up dead or paralysed.

Such is the determination of the [fictional] Seacrest County Police Department that I’m surprised Max Rockatansky isn’t on their payroll. Of course, these drivers bring it on themselves by racing illegally in the first place. You’d think wrecking a few of their cars would deter them, not encourage them.

But then, this is a Need For Speed game. You want high octane thrills, insane speeds and dramatic crashes. Thankfully, Hot Pursuit delivers in buckets, from both sides of the law. A faithful remaster of the 2010 classic, it’s as close we’ll get to a Burnout Takedown remake for a while.

Yet it comes with a surprisingly difficult learning curve, as well as strict time parameters in races. Is it something to push through and grow to love, or will it put less competitive players off? Let’s take a trip to Seacrest County and find out…

Blinded By The Sights

Normally, the first port of call with any remaster/remake is to make immediate comparisons to the original. I hadn’t played the original, my last NFS being Most Wanted as an Xbox 360 launch title. The closest parallel of the original I could draw would probably be Split/Second.

So going in blind to Need for Speed: Hot Pursuit Remastered, I can confidently say, “Hot damn”. Whilst it’s obvious that this is a game from the last generation, considerable effort has been made to spruce it up to current gen. Criterion and Stellar Entertainment had proven themselves with the Burnout Paradise remaster, only to hone that craft on this one.

Suffice to say, the sense of speed and adrenaline-fueled nature of racing is perfectly encapsulated here. Cars are polished to that mirror sheen and faithfully recreated from their real world counterparts. Roads glisten, landscapes look vibrant and the sense of immersion is there when you’re hitting top speeds along highways.

It’s not pushing for graphical realism like, say, Driveclub or Gran Turismo Sport. Remember, this game is a decade old. Yet it’s obvious that care has been given to spruce this up to modern standards, rather than just adding that “HD sharpness” and calling it a remaster.

There isn’t really much of a “plot” to Need for Speed: Hot Pursuit. Seacrest County is a desirable hot spot for racers thanks to its large roads and stretches of highway. As such, you and a bunch of others head to it in your flashiest of flash cars to be the fastest troublemaker around.

The police, in typical American fashion, take it too far and are determined to wipe racing out in this wondrous part of the country. Quite literally wipe out, as “as any means necessary” translates to “run them off the run in the quickest fashion”. This is where the Burnout influence from Criterion comes in, and it’s bloody lovely to see.

As a racer, you’re tasked with climbing the Most Wanted list. This ranking system is rudimentary enough: do good in races, unlock faster cars. Whereas the thin blue line is… largely the same, actually. You have a more formalised ranking system, but progression is achieved in the same way. The only real difference is you only get one livery and a siren.

Events are laid out on a county map, letting you pick whichever one you fancy. The racing side has you participate in point-to-point races (funnily enough), time trials and showcase events for high end cars. The police side sees you take out a set number of racers in an event, as well as time trials in new cars for the force.

Each location on the map has one event to cut your teeth on, with more unlocking as you progress. They start off innocently enough, yet soon evolve into more tactical affairs as time goes on. The only downside is it doesn’t tell you how to unlock them, you just have to keep an eye out for “New” icons on the map.

Getting To Grips With The Lack Of Grip

The driving itself I found to be difficult, but don’t take that as criticism. My most recent, comparable game to this would be Forza Horizon 4. Whilst that is a spin-off of its more realistic cousin, the Motorsport series, it still retained some element of realism with its handling.

By comparison, Need for Speed: Hot Pursuit is very much geared to arcade fun. It favours ball-busting speed and straights, before chucking in a heavy emphasis on wanging your ride almost 90° around corners. On straight roads, I noticed the car tends to align itself and that by trying to compensate for it would easily careen you into a wall/barrier/traffic.

Drifting also took a while to get used to, as all it takes is a dab of the brake or double-tapping the accelerator to start one. It makes the handbrake redundant, as that’s more sensitive than a Trump supporter after the election news breaks.

But, and this is a big but, none of the above is a negative about how it plays. Yes, I initially found it frustrating. Then I channeled the likes of Split/Second and Burnout from back in the day and reminded myself that it is that kind of game. Me sucking at it is a result of me sucking at it, not because it’s “the Dark Souls of racing games”.

I Fought The Law, And The Law Fought Back

Need for Speed: Hot Pursuit does have some nifty tricks up its sleeve though. And by “nifty tricks” I mean “nicked the weapons system from Blur”.

As events progress, you get access to a wide variety of Wacky Races-style weapons to use against the competition/threat. The racers get spike strips and EMP blasts, whilst the long arm get that and then some. Like being able to call roadblocks further down the line to trap the nefarious nippy buggers ahead of you. And helicopters, but I won’t spoil what they do.

There’s an element of tactic to using them, like waiting until you’re just in front of someone to drop a spike strip like the proverbial Mario Kart banana. These armaments carry over to multiplayer, too, which is fun. Well, fun in the “great when you do it, absolute bullsh*t when someone does it to you” sense.

Speaking of multiplayer, Hot Pursuit has you covered direct and indirectly on that front. Direct in that you can race online, both as police and street racer, allowing you to put skills learnt it both aspects to use. The indirect side comes in the form of the Autolog system. This, coupled with crossplay, allows you to challenge and beat your friends’ times across events.

Bringing back Arms Race and Most Wanted from the original’s DLC is a nice touch, too. The former is pure Crash Team Racing/Blur, whilst the latter is expensive Cat(s) & Mouse: One racer, the rest are cops. You can imagine the carnage.

It’s hard to find a fault with Need for Speed: Hot Pursuit that I can’t put down to me being crap at it. Could I whinge about there being no option to change the AI’s difficulty? Sure, but would just reiterate that I’m expecting an easy ride (pun intended).

I’m only finding it difficult because I haven’t played a game of its ilk, or even the original, in quite some time. It’d be like reviewing Dark Souls and quitting on the Asylum Demon, or playing a hunting game and not spotting any of your targets.

No, the fault in this game lies in your own ability to “get good”. It will no doubt annoy those that don’t have the time or perseverance, and that’s understandable. It’s not an unapologetic game, it’s just the game it always has been. Criterion have been faithful to a decade old game without pandering to easier mechanics, take or leave it.

Despite my protestations, I’m having an absolute blast with Need for Speed: Hot Pursuit. In the wake of Hotshot Racing, it’s brought back that “one more go” addiction/frustration of days gone.

Its presentation is slick, running at either 4K and 30 frames per second, or dropped down to 1080p yet pushing 60fps (although mine was locked to 30fps on base Xbox One). The handling, fiddly as it is to get used to, really opens up the more you play (surprisingly). You start feeling more attuned to it, as soon you’ll find the comfort in hurtling around corners sideways.

Crossplay and Autolog are a welcome pairing, as well as multiplayer being optional instead of intrusive. It’s not a tacked on feature, but one for you to have a go on if you fancy it. Unlocking new cars is always a delight, even if the grandstanding presentation every time wears a bit thin. Again, this is what racing games were like back then, all loud and bombastic, so can’t complain too much.

There’s nary a microtransaction in sight, and all the previous DLC from the original is included in its lower-than-AAA price. If this is the post-Battlefront II EA we’re dealing with now, I like it.

To conclude, Hot Pursuit is worth of your time if you like a good ol’ fashioned arcade racer, all dolled up for present day standards. Your mates may have moved away, but you can still best each other’s time, wherever they are and whatever platform they’re on. Go on, you know you want to…

A cracking example of nostalgia done right, Need for Speed: Hot Pursuit Remastered is as worthy as any current-gen racer out there. It’s not easy to begin with, but once you’re practiced you’ll be flying across the finish line.

Need for Speed: Hot Pursuit Remastered is available now on Xbox One (reviewed on), PlayStation 4, and is coming to Nintendo Switch on November 13th.