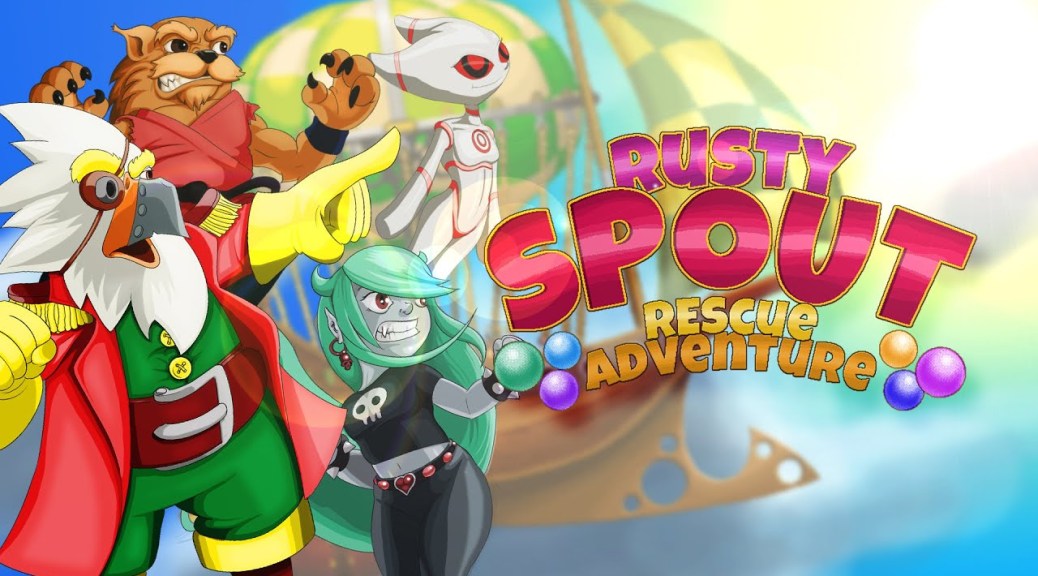 If it’s true that imitation is the sincerest form of flattery then Puzzle Bobble (or Bust-A-Move for our friends across the pond) and Snood must feel very flattered by Rusty Spout Rescue Adventure. Of course, this isn’t the only game to replicate the bubble popping puzzles from the 90’s boom – everyone from Worms Blast to the Sky Games’ Beehive Bedlam had a crack at success in this genre – but Rusty Spout is one of the more charismatic attempts. It’s a shame that some design issues and a lack of invention prevent it from replicating the simple thrills of the classics.

Rusty Spout Rescue Adventure is a match-3 bubble popping game. If you’ve somehow managed to avoid a game in this genre for the past 16 years, the aim is to clear the puzzle board of any of the coloured bubbles hanging from the top of the board by shooting randomly selected sticky, coloured bubbles from the bottom. Direct the fire, shoot and when 3 bubbles of the same colour touch, they pop off the board along with anything below it that’s not connected to another bubble. Every 15 seconds or so, the bubbles are forced further down the screen either by adding a new top row or by the lowering of the ceiling in the puzzle area. A level ends in success when all the bubbles are popped/dropped or failure when any of the bubbles get so far down the screen that they pass the level where the bubbles are fired from.

This formula hasn’t evolved in any meaningful way since its inception in 1994 and it’s certainly not revolutionised here. Each level has a defined pattern to clear, most of which have a little trick to quick clearances or a strategy to learn. This almost always requires some pinpoint accuracy or bouncing the bubbles off the sides of the puzzle board in order for them to circumvent what’s in the way. For example – When every bubble is hanging from a solid row of orange bubbles at the top of the screen and you’re served an orange bubble, you’ve got to bank the shot off the sides in order to land it perfectly. And you only get one chance because if you miss, the ball will likely block off the space available. Hit it and everything falls so it’s worth a punt for the massive rewards. Rusty Spout Rescue Adventure does a reasonable job of mixing up these puzzle structures and the tests put forward.

One of the more interesting aspects of Rusty Spout Rescue Adventure is the use of special power ups and immovable blocks. Some levels during the main campaign mode have special bubbles – like bombs that explode when touched or blasts that clear every bubble on the same line as them – placed in strategic spots that encourage particular clearance methods. Conversely, many of the levels have structures which can’t be removed that need completion just that little bit tricker. While none of this is new for the genre, their inclusion does put it ahead of many Puzzle Bobble clones.

There’s a plot of sorts to Rusty Spout Rescue Adventure and while it’s paper thin, this is where most of the game’s charisma comes from. Rusty Spout is the feathered peaceful pirate pilot (an incredible oxymoron) of a cloud surfing air ship and he’s in pursuit of Cocco, an evil pirate who has kidnapped all of the children from his island. For a bubble popping puzzle game, it’s admirable how much effort this game expels to tell a story. So few in this genre have any narrative at all but here, at the end of each of the game’s 5 biomes there’s visual novel-esque conversations with area bosses you’re about to take on.

The boss battles will be the most divisive aspect of Rusty Spout Rescue Adventure. Here you’re presented with a typical bubble board and on the other side of the screen is an enemy that you’re fighting. This enemy will occasionally activate their attack which spawns a new wave of bubbles hanging from the bottom of the existing bubble structure. In order to defeat the enemy, you’ve got to fill any of the coloured gauges at the side of the screen 3 times. These are filled a little every time the corresponding colours are cleared from the board. These battles can be tricky. There’s a random nature added to the puzzles in the form of the bubble spawn that almost throws out any element of strategy, instead testing the player to quickly find a similarly coloured ball and just firing it off. Traditionalists who like the original Puzzle Bobble formula might not gel with these boss fights but they do make up the most tense moments of the whole game.

In terms of modes, there’s some limited variety on offer. The main content is the Story mode, a collection of 50 levels set across 5 game worlds each with their own background art and theme music. This mode requires the player complete all of these levels and the boss battles with just 3 credits (so, without dying more than 3 times) in a set order. Because of this, you’ll likely see the first few zones repeatedly before tripping over the higher difficulty tests later. This can certainly start to feel like a grind after a while. Outside of this mode is the Endless mode which, as the name suggests, lets you play forever if you can stay alive that long. Every 15 seconds, a new layer of bubbles is added to the top of the puzzle grid. There’s also 2 different kinds of battle mode which can be played in 2 player with the 7 characters unlocked via progress in the Story mode. Each of the 7 characters has a unique mix of special blocks that will become available at random during play. One character uses nothing but bombs while others have a more tactile arsenal. Having different characters to play as certainly gives this game more charm than recent entries into the genre that I’ve played.

Rusty Spout Rescue Adventure is missing a lot of the features that have become commonplace for this genre. The multiplayer is local split screen only, sorely missing the online battles that made the likes of Frozen Bubble a success. Leader boards are local only too. The modes here don’t really do anything experimental with the genre either. There’s nothing wrong with replicating what worked so well with Snood in 1996 but to not take the opportunity to innovate given the development tools available today is a real shame.

The biggest issue with Rusty Spout Rescue Adventure is one that’s a core design problem and one I feel makes this game far more difficult tban it needed to be. Go back and look at the devices that fire the bubbles in almost every successful game in this genre. It’s usually a pointy, thin indicator regardless of the theme of the game. In this title, the launch device is a cannon that’s thick and wide, tying into the games theme to its detriment. Without the shot guide (a dotted line which shows where each bubble will land after fired) which is not available all the time, getting the required accuracy needed for a game of this ilk is impossible using such a thick origin point. Playing a game without an adequate directional gauge can get frustrating when attempting those big risk shots.

Developers 7 Raven Studios are carving a niche for themselves by mining the retro game concepts and design tenets and cloning them for today’s market. They did this with Ghost Sweeper which riffed on Solomon’s Key and now they’re doing it for Rusty Spout Rescue Adventure. There’s fast fun to be had here but without any meaningful innovation, it starts to feel like an also-ran in a genre that peaked years ago.

A charming bubble popping puzzle games that replicates most of what worked back in the 90’s, Rusty Spout Rescue Adventure is a fun if limited game. There’s nothing wrong with emulating the classics but when a game does this without bringing anything new to the table, it’s hard to see it as anything but inessential.

Rusty Spout Rescue Adventure is available now on Xbox One (reviewed on an Xbox One S) and Nintendo Switch.