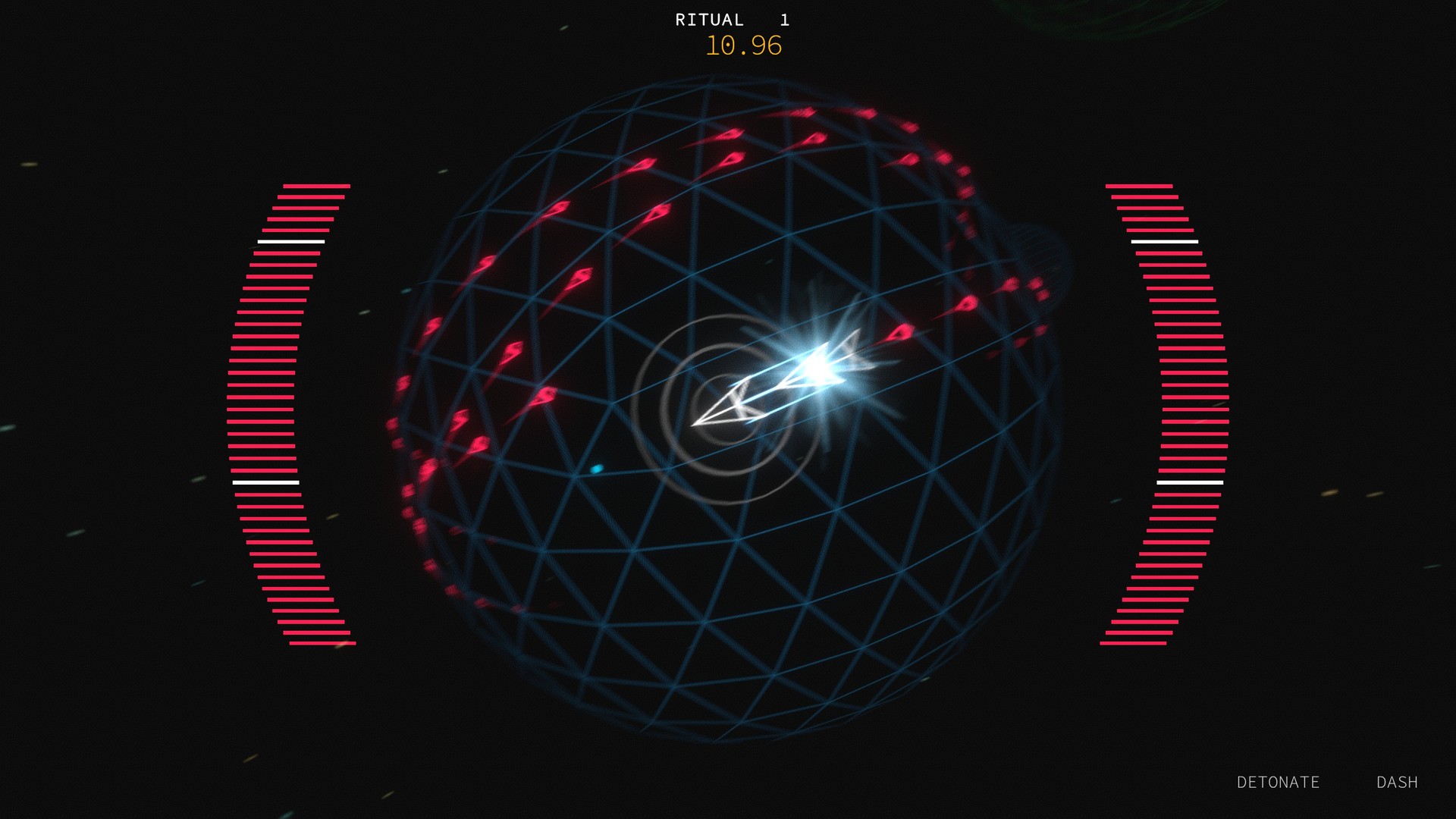 A bullet dodger where you create the hell of your own demise, Terror Squid might well be one for the score-chasers.

A bullet dodger where you create the hell of your own demise, Terror Squid might well be one for the score-chasers. The Finger Guns Review.

One of the most infuriating things in videogames is managing to kill yourself. Walk off a ledge, grenades that bounce back, setting yourself on fire, falling in holes, we’ve all done it, and probably hundreds of times each. So what possessed Apt Games, the makers of Terror Squid, to create a game where every single time you die, it will be by your own hand? The only thing you can blame for every failure, on every run, is yourself.

A bullet hell of your own creation, Terror Squid has a unique selling point. Check. As you traverse the spheroid neon vector planet, your tiny ship, or in this case squid, is firing bullets out of its own rear end. If it’s really meant to be a squid, then I’m thinking of this as its ink. The bullets orbit the planet, and come back around to literally haunt you, creating a maze of death to avoid and survive through. An asteroid field of your own making. It’s a cool idea, and one that saw the developers win the 2019 Norwegian Gameplay Championships with it. I say cool, I mean sadistic.

It’s an arcade score-chaser, built to get progressively harder as you survive longer and longer. Put your quarter in and see how long you can go on one coin. You are given no normal forward-firing weaponry of any kind, instead tasked with constantly avoiding the maze you’ve made for yourself. You have just two available functions – in my mind mirroring the oldest arcade’s joystick and two buttons. First is a dash that will shunt you forward making you invulnerable for a second, and giving you the ability to burst through walls you might have inadvertently created. It has a tiny recharge, almost unnoticeable, but enough that you can’t spam it, you have to be accurate.

The other function is a blast radius around your squid that can destroy any bullets within its range, and create a cascade effect for every subsequent bullet in range of the last explosion. It’s quite simple in the early stages to set off quite satisfying cascade explosions that will completely destroy every bullet orbiting the planet. If you’ve kept the maze that is always coming at you nice and tight and formed, then it will be simpler to set off the chain reactions you need to keep clearing the game space. Of course, very quickly that’s not possible.

Each blast is on a charge of around ten seconds, charged simply by you staying alive. Activate the blast, destroy as many of the bullets as possible, and then your squid will start shooting out a different type of bullet pattern. Some are simple rapid-fire, some are bursts of tiny bullets, some are ever-widening arcs, and some are rhythmically moving snakes. You must think somewhat strategically based of what kind of bullet pattern you are currently firing, and what is the best way both to survive, and to maximise the destruction of your next blast.

Blasts equal chain reactions which equal points, and you’ll get a nice distorted voice exclaim an adjective about how good you are. ‘Radical!’ ‘Tubular!’ or ‘Disappointing’ if you didn’t catch much in the blast. But for the most part this score doesn’t matter; it’s the amount of time that you survived for that puts you on the leader board. What’s interesting with a leaderboard based on time, is that its actually about surviving for as long as you can, filling up the planet with bullets as much as possible, before blasting away and clearing to the next pattern. You can go a lot longer on the patterns that work in straight lines for example, so you need to maximise them.

Now everything I’ve described so far is a single mode, albeit one built up of different sets of bullets and different strategic challenges. However this is the only mode of the whole game. A single mode can make a game, but I’m afraid in this case it feels like there should have been at least a couple of other modes to choose from, and the corresponding multiple types of leaderboards. There’s no other planets to pick, no mode where you have a weapon as well, no score based leaderboard for the biggest baddest explosions, and no other version of the central conceit of creating your own bullet hell.

In something as memorable and accomplished as Geometry Wars for example, this would have been a single mode in an otherwise more substantial package. Super Stardust Delta, which is probably a good direct comparison given their shared spherical game worlds, had multiple planets, weapons, asteroids, switching weapon types for different needs, shields, and a level by level mode and an arcade mode.

Terror Squid feels like a single mode from what could have been a bigger and better game. At £8.99 that seems like very little for your money.

Graphically and sonically, Terror Squid is nice to play and well-made. As far as I can tell, there is only the one music track, but it’s a banger, and the distorted voice and subliminal frame flashes are interesting although I have yet to manage to read one properly. The little vector squid and the bullets remind me of Geometry Wars, all soaked in Tron-like neon, and the game is responsive and fast.

It’s arcade at its core – survive for as long as you can on that single quarter. I wasn’t expecting a story, but I was expecting more modes than just one. As it is, a few bullet hell fiends will find this a fantastic rush and a rewarding test of their skills. They will find that one-more-run hook and probably get their monies worth. But they are a very niche group. That said I had a blast for a few hours, trying to put myself on the leaderboard in a place that wouldn’t just immediately fall off again as soon as the game launched.

What’s disappointing is that after the rather bizarre and quite memorable marketing campaign with its terrifying R-rated trailer, fingernail removal and subliminal messages, the actual game has almost nothing to do with any of that. It’s got memorable presentation, but the game itself is pretty forgettable.

Well crafted and responsive, Terror Squid is an addictive one-stick dodger through a bullet hell of your own creation. It does it’s one thing really well, but with just a single mode and a single gimmick, there’s not really enough to justify the price tag. This is one for the score-chasers.

Terror Squid is out now on PC (reviewed) via Steam, and Nintendo Switch.