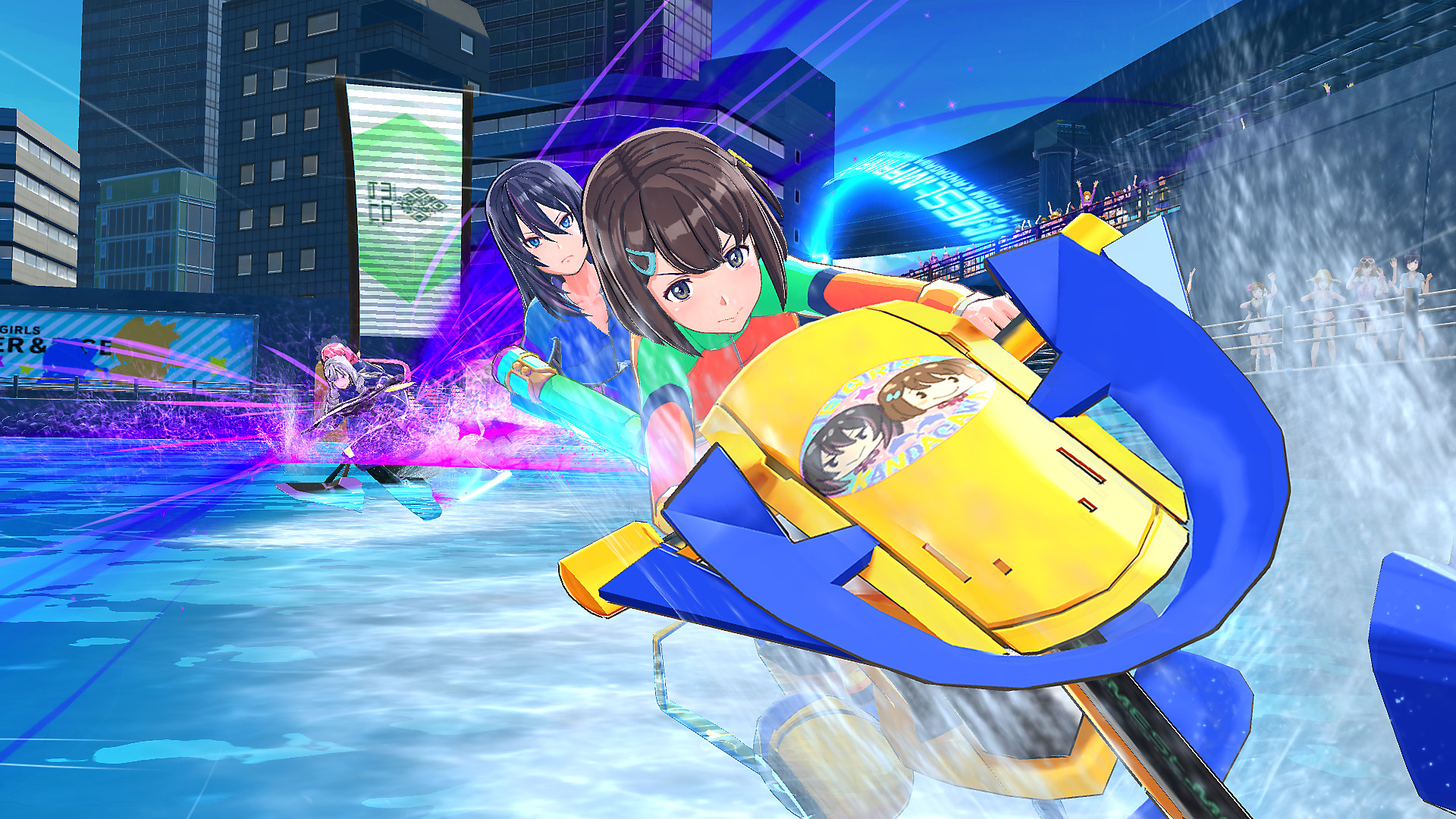 Kandagawa Jet Girls is fan service 101, but there's not an awful lot else here. The Finger Guns Review;

Kandagawa Jet Girls then. The title alone is more than you need to figure out exactly what this game is. Have you guessed yet? It’s a jet-ski game based on an anime series which began in 2019 and has already gone and gotten itself a video game spin-off, in the same vein as Senran Kagura and its ilk. It’s even from the same publisher (Marvelous) as the hugely popular Kagura series, so its pedigree is embedded. As the quality of those titles can hugely fluctuate between ‘terrible’ and ‘not terrible’, KJG lands somewhere in the middle, offering a harmless if ultimately forgettable first go at the treacherous gaming waters.

The first thing you should probably know if you’re a fan of the Kagura series is that Jet Girls damn near takes the formula in a different direction entirely. Sure, you’ve got the charming dialogue sequences, the characters that are – eventually – pleasant and entertaining, the explosion of colour and joy that only comes from a Japanese led adventure such as this and of course, the prized booty of the ‘Dressing Room’ mode – where you can spend far too long kitting out your girls in whatever clothes your heart desires – but that’s really where the comparisons end.

When reviewing every single new iteration of Kagura the last few years, Jet Girls omits ‘Gropey Mode’ entirely, allowing the girls of Kandagawa to be free from your wandering hands, which can only be a good thing. Right?

The characters are designed in the familiar ways that you’ve come to expect. The cast is expansive and full of sweet, bossy and quiet cliches, leaving little room for innovation but ticking the boxes it’s expected to.

Thankfully, they’re all rather likeable which is a huge bonus, considering just how long you spend with them in dialogue heavy sequences between the actual jet-ski races, which you think would be the primary draw in a jet-ski game but I was soon disabused of that notion, given at least an hour into the game I still hadn’t taken part in a single race.

Still, what’s worth celebrating is that once you’re on the water, there’s a good amount of fun to be had. The physics feel realistic, the jet skis themselves are weighty and glide along the water as you would expect. I did perhaps go into the game thinking the cash-in element of early Senran games would be present and correct but there has been some real consideration into the design of the tracks – which are short and snappy, presumably to get back to the all important dialogue action –  and how the jet skis feel, which is hugely welcome and like I say, surprising. The courses also look gorgeous, with colour popping off the screen at every opportunity and no hint of slowdown (playing on PS4 Pro).

The variety on offer within each race is also a highlight. Before you find yourself in a race there’s a hefty tutorial segment which will teach you everything you need to know about the movement of jet ski and the available power-ups, boosts, weapons, tricks and drifting, and the game won’t let you proceed until you’ve learned how to pull off each of the games mechanics.

In-race, you’ll find it easy enough at first, and you’ll knock out victories one after the other after the other, even if you never feel like you’re going particularly speedy through the courses when you really want to let fly. There’s no real challenge in the early races – including a battle for a dolphin pendant which our Kandagawa duo find in a shop – but it’s a great way to learn the courses.

If you want to customise your jet ski then of course you can, and the options are exhausting. The upgrades are unlockable depending on how well you do on the water, but you can change up the colour as often you like and make it really stand out on the courses.

Elsewhere, this being a XSEED/Marvelous joint, there’s a ton of side-modes and events you can get stuck into featuring mini-games – where you can earn points to spend in the store on various cosmetic items and upgrades for your girls and jet-skis, the aforementioned dressing room which, if you’re so inclined, you can spend hours in. The mini-games include, and yes it’s real, a jet-ski washing mode where your favourite of the anime girls washes down their priced motor, button-mashing nonsense and an online mode which I haven’t had the chance to test at the time of review. I wasn’t able to find a game, despite the game already being out? That was disappointing.

There’s plenty to like about Kandagawa Jet Girls, then. And it’s perhaps one of more complete and accomplished titles released from the Marvelous portfolio of IP in recent years, but there’s very little here that won’t preach to the already converted. Those who enjoy Kagura and the like will find an experience they’re most definitely used to – and yes, you get your feet close-ups should you want them – but it offers nothing to convince those who may look at this particular genre with a sense of derision. We’ve always attempted to be glass half full when it comes to Marvelous’ output, even though it’s not particularly my go-to series of games to play. Thankfully, as mentioned above, they do seem to keep getting better, so it bodes well for whatever the inevitable follow-up of Kandagawa Jet Girls will offer.

The narrative is entirely predictable of this kind of genre, which means it’s a real struggle at times to get through the heavy dialogue sequences, of which there are many. Throughout you’re longing for a return back to the racing waters and even then, the actual races are so few and far between, the balance feels off and you’ll find yourself tearing through the predictable dialogue in the hopes of being able to do something again.

So it’s good enough to proclaim it’s better than the majority of the Senran games or similar titles of its ilk. The issue is that it’s great in some parts, frustratingly paced in others and there’s no middle ground.

Kandagawa Jet Girls is exactly what you expect and still offers a fun time for those invested in the genre. For everyone else, there’s absolutely nothing to see here.

Kandagawa Jet Girls is available now on PS4 (reviewed on PS4 Pro) and PC via Steam.