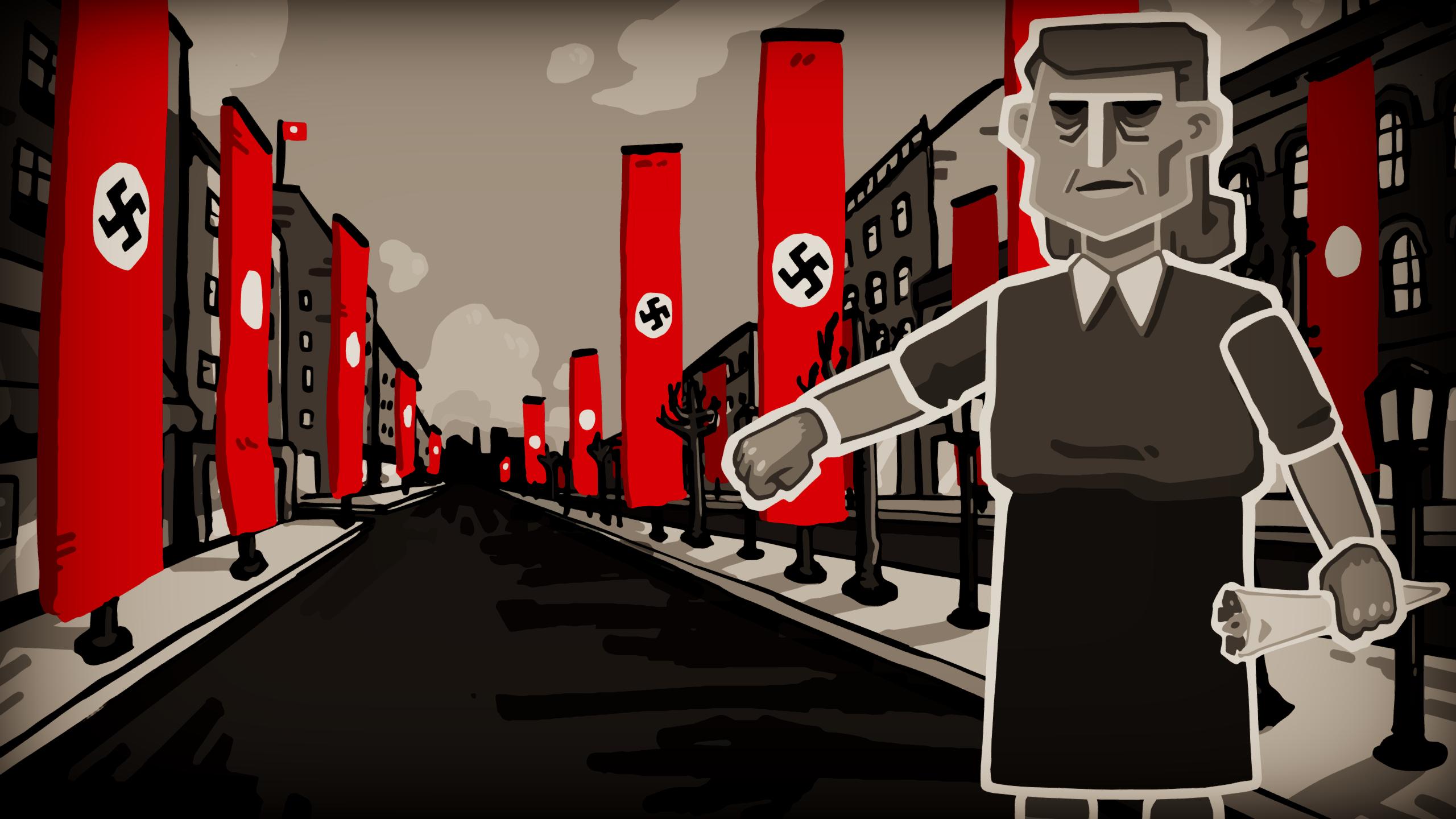 The Darkest of Times provides a different perspective to World War 2 presented in a stylised strategy game. the Finger Guns review

World War II has without doubt showed the worst of humanity. But in that process, it has also showed us the best in people and how we as a race will always stand against tyranny and that’s just what The Darkest of Times focuses on.

In the video gaming world, we have had our fair share of games set during World War II but they have pretty much all focused on the perspective of the soldiers and the view down their iron sights. Very rarely have we had a game whose viewpoint is based on the real people and what they think. That’ all changed now thanks to a charming (feels odd to use that word) strategy game from Paintbucket Games.

The game takes place between 1933 and 1946 and sees you take control of a ragtag group of like-minded people of varying political and religious beliefs. These resistance fighters want to highlight and spread the word about the evil behind the new Chancellor of Germany, Adolf Hitler. This small band of fighters can only survive on the goodwill of supporters, and as the leader, you have the unenviable task of planning missions and help the growth of the resistance without compromising the safety of you or your fellow fighters.

The premise of the game is pretty simple. Build your band of resistance fighters, select a mission, and assign the best people for the job and hope not to be spotted or captured. However, the process is fairly complex in nature. Most of the game takes place on a map of Berlin where you can choose which mission you want to undertake. Some missions are made of multiple parts, which also adds a basic level of resource management. Each mission tells you the rewards, risks, and other attributes that are needed to complete the mission. It’s imperative to study the missions carefully and make sure you assign the best people for the job by matching stats to the mission brief – else failure can have dire consequences. If a team member is captured, then you have to spend vital resources to break them out (if you choose to) which also puts the lives of other resistance fighters at stake. It’s a moral question of is one life worth the loss of two or maybe three?

The game spans 13 years but each turn you take represents one week. At the start of each turn, you are presented with three newspapers that are historically accurate, with key historical scenes interspersed into the narrative to give that extra level of unnerving despair. I found this to be perhaps the best part of the game. Actually, learning more about the events that lead to World War II is a sobering experience. There are also random events that pop up and sit alongside the narrative leaving you free to choose how you want to interact with Hitler’s bully boys and other supporters of the Nazi party. Should you help this stranger or not, what is the risk and reward factor? all these questions are present and at times these moments can be a tough read, played out like an old fashioned choose your own adventure story.

So, at its heart Through the Darkest of Times is a strategy game and like all strategy games, the key to success is in the planning. For the most part, you are in control of all the elements. From time to time there are elements out of our control like in-party fighting, family problems, or death. All this doesn’t help the ever-present moral bar. Losing missions or members bickering and so on affects the bar negatively, complete missions, and enroll more supporters and the bar goes up. The trouble is, this moral bar can feel a little bit out of your control, with in-party bickering something you have no control of. Once you have planned your mission it’s simply a case of watching the game do its thing (roll dice essentially) and hope the outcome lands in your favor. The nature of this type of game emphasises the need to plan your mission meticulously. Something that is harder than it should be thanks to the text and iconography being so small it’s almost unreadable.

The gameplay and storytelling are represented by a wonderful art style with bold colours sitting on stark mono backgrounds which reflects the oppressive nature of the events unfolding. All helped along by a score that flips between happy jive to something more meloncholy This score helps deliver atmosphere in buckets. It’s just a shame that your victories (or losses) are presented in a spreadsheet type form rather than some something a little more detailed.

I’m not one for strategy games, I find them too cluttered and overly complicated for a console. However, Through The Darkest of Times has managed to reduce the complexity of the menu systems into a coherent and easy to follow system, which doesn’t detract from the main gameplay elements. As mentioned earlier the only real trouble with the UI is that the text is too small and hard to read. A forgivable flaw considering how well the system works overall.

Through The Darkest of Times is a rare game that does away with Wham Bam graphics in favour of a more somber style to reflect the atrocities the game covers. There are no pre-rendered CG or FMV clips of your team doing their work, it’s just a simple graphic (if you’re lucky). The open nature of the game allows you to play at your own pace, choose which missions you would like to tackle first and make the tough decisions needed to help build the party and moral.

The random events that pop up really help stop the game from getting repetitive and offer some powerful moments. All these events add to the story and never feel shoehorned in especially the historically accurate events. This certainly isn’t a game for everyone. You really need to get it to enjoy it. It’s as basic as a strategy game can get but is well worth a go if anything to learn more about World War II from a different perspective.

The Darkest of Times stark and sobering reminder of how lucky we are, and what sacrifices were made for the greater good. As basic as you can get for a strategy game but it’s all the better for it.

Through The Darkest of Times is out now on P4 (reviewed) Xbox One, Switch, PC, Android and iOS

Disclaimer: In order to complete this review, a promotional code was offered to us. For our full review policy, please go here.

Tags: Handygames Paintbucket Games Through The Darkest of Times