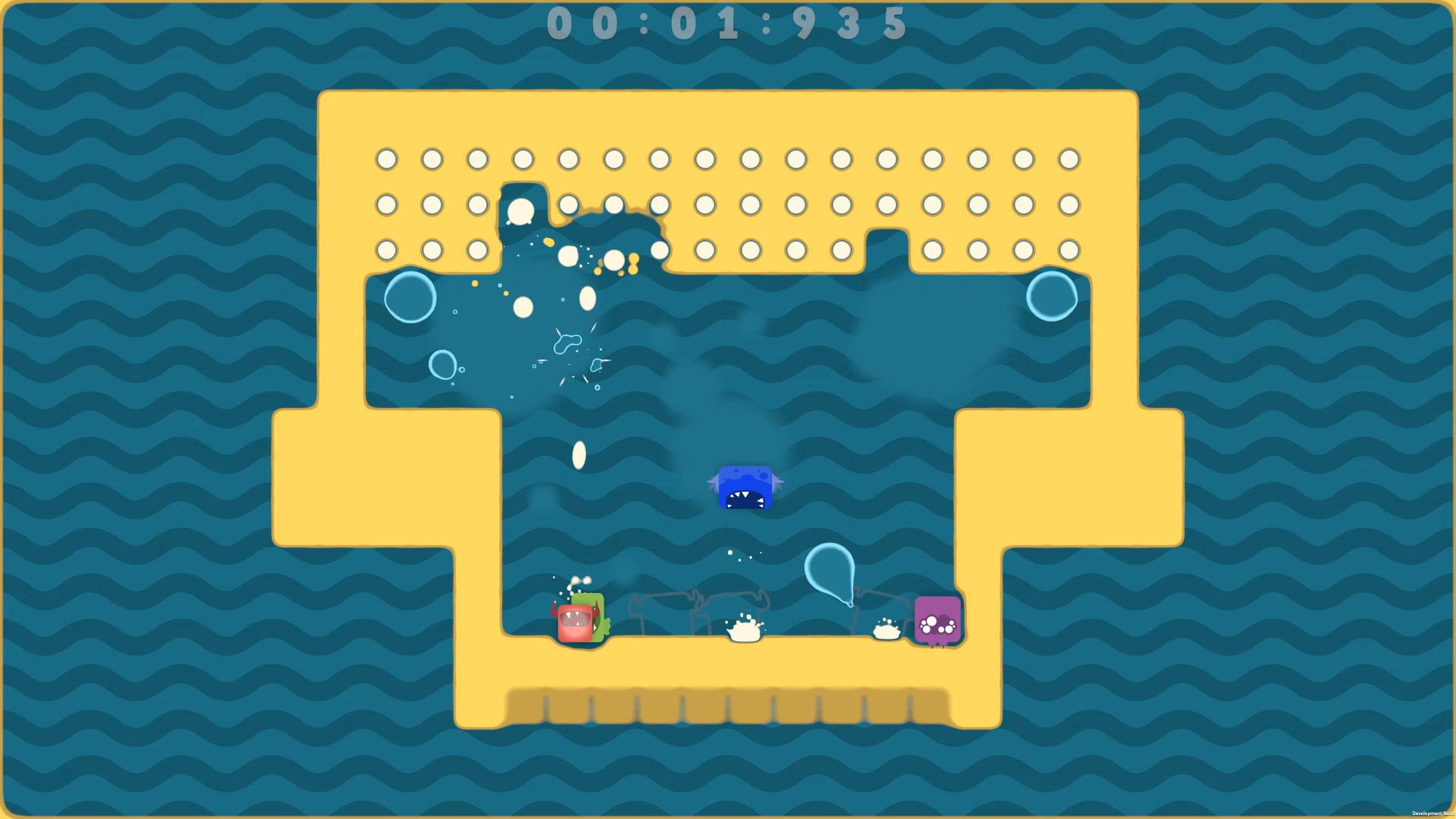 A Space Invaders-like puzzle party game, where you spit to shoot, and must catch gobs of spit in your mouth to re-use. Sound gross? Be grateful then that its also lots of fun. The Finger Guns Review:

One of the most disgusting habits to befall many teenagers is spitting. Honking up a great gobbet of saliva, possibly with some added flem, and spitting it up on the pavement, off a bridge onto passing traffic, into rivers, puddles and lakes, or the worst, into the face of your enemies. Spitlings is a game that revels in spitting, and not just spitting, but in catching that spit in your mouth again, after it has stuck to ceilings, floors and killed enemies. It has challenged me to go from spitting is disgusting, to yay, spitting is my favourite thing, let’s do more.

“But what the flem is a Spitling” I hear you cry? Alright, calm down. A Spitling is a small vaguely square-shaped 2D creature, most of the time with no arms, legs or eyes. Mostly they are just squares with a wild variety of different types of mouth. A mouth from which to spit. Biologically they must be rather bizarre, like a square shaped worm, with simply a mouth, stomach and anus, and a digestive system geared entirely towards producing far too much saliva.

The interesting thing about each Spitling is they all have teeth, or blobs or horns or something that is white in the mouthpart. You have ten shots of spit before you get terrible dry mouth and can no longer spit, and in a nice feature, the little teeth, or horns or whatever will count down and disappear as you run out of ammo, until your faced with a gaping maw. You are then defenceless, and have to spend crucial seconds, up to ten for a full load, churning your saliva glands for more spit, before you can get started again. With enemies bouncing around, those are seconds you do not have.

So instead of dry mouth, the main gameplay loop is about catching the spit again so that you never run out. Rendered down to its flemy constituents, Spitlings is Space Invaders by way of a puzzle party game. You flob upwards to shoot at the bouncing enemy slime that has taken over your home, and catch it again in your mouth. You can spit downwards to propel yourself up, completely against the laws of physics, but we’ll give that a free pass, and you can use this to spit down at enemies bouncing below you.

The game is split into levels of a giant tower, each level consisting of three rooms, and each room consisting of three mini puzzle rooms which are the actual juicy part. The framing of the rooms containing these puzzle levels was actually superfluous and there was rarely any worthwhile gameplay to be had in that space, beyond moving from left to right. It could have been served just as well by a hub section where you chose the levels. If you want to go back to previous levels you have to traipse through the tower, or use the lifts on one side to go back up to floors you have completed. It just felt unnecessary.

The Spitlings live in presumed peace and harmony in what I’m calling Spitling Tower, but the game starts with an alien blob crashing into their planet and then from the crater around Spitling Tower, seeping upward into every crevice and floor of the whole structure. There is a vaguely animated half-decent comic strip to explain the story, and you get another comic sequence for every two floors you clear of alien goop. I like to think of it as Gwyneth Paltrow’s toxic Goop, that needs to be purged from my world.

By far the worst thing the Goop has done is ensnare one hundred of your fellow Spitlings in a cage of goop from which they cannot escape. For every collection of three puzzle rooms you complete you will free another Spitling, and if you manage all three puzzles in a set of required time constraints, you can then earn another set of puzzle rooms, which are slightly harder, but with the chance to free one of the rarer bonus Spitlings. Think of these levels like the B-Sides in Celeste, new colours, harder and more exacting requirements to win. Upon completing any level, you can freely change to the new Spitling, which was welcome, as it changed things up as I went. Each Spitling has a unique design, a new colour and shape, and each has its own sound effects. Take a look below at the roster of Spitlings available, which number one hundred, it’s clear where your collectathon lies. It’s a rather impressive amount of playable little creatures. I know they are just palette and image swaps but the variety was appreciated, and some of the designs are very fun.

I think they look like Gogos. Do you remember Gogos? They were this craze in the late 90’s just after Pogs, that involved these little plastic square-shaped characters that came in a hundred designs, and you would flick them at other Gogos, hurt your little child fingers, and if you managed to connect and knock over your opponent, you could claim their gogo, if you were playing for keeps. Of course, just like with pogs, only nutters played for keeps. I didn’t have the kind of pocket money that would let me fund my mate’s collections. After that craze it was on to Pokemon, and then a serious gaming addiction, but that’s another story.

The game is actually pretty tough. Its simpler with care and caution, but you will have a lot of trouble trying to smash the time trials and nab all the Spitlings.

Spit sticks to surfaces and then rains down on enemies, or you, if you’re quick enough to catch it. Some areas are slimy and the spit can get stuck and take longer to fall. Areas can be lined with spikes or bounce pads, bouncing spit gobs and enemy blobs all around the level, making it difficult to move around in any level without hitting an enemy blob and then game over. One hit and you’re done, but the game loads your new go very fast, and has the curious choice of showing you an outline of where you died previously. Some levels can take dozens of attempts, and the resulting mass of outlines on the screen is impetus never to give up.

As I said, it’s a party game too, and if you have a mate or three who like punishing puzzlers, it can be a laugh trying to complete these levels together. The co-op mode is competent, but difficult, as if any one of you die, that’s game over for the others.

There are also lots of multiplayer options and arenas, and what are called mutations; scenarios under which the arenas will be placed for your multiplayer fun, such as flipped gravity, tiny spitlings, non stop bouncing etc, that can really add a lot of fun variety to a simple but fun game. They are like the ones you used to get on Goldeneye, like large heads, paintballing etc. I don’t think Spitlings has the staying power of the classic party games, but its good and does its job.

I found Spitlings tough to the point of frustrating. I could never quite get the hang of shooting both up and down, and with bouncepads knocking blobs in every direction, some levels became agonisingly difficult. And they come in groups of three, so you couldn’t even quit, without having to do all three again. The B-Sides I found nigh on impossible, due to the large amount of ‘luck’ involved. Recommended, but not if you’re the type to throw a controller.

Spitlings is a satisfying and solid puzzler, and provides plenty of challenge for those who enjoy a fun mechanic with plenty of wacky design. There are so many Spitlings to unlock, that anyone will find the game lasting them a fair amount of time. It encourages completion, through the same “gotta catch ’em all” ethos as Pokemon. If honking up flem and spitting it at others is your idea of a fun evening, maybe do it with this game, rather than off a bridge.

Spitlings is launching on PC (review platform), Nintendo Switch, PS4 and Xbox One on August 4th, 2020. The game is already available on Google Stadia.