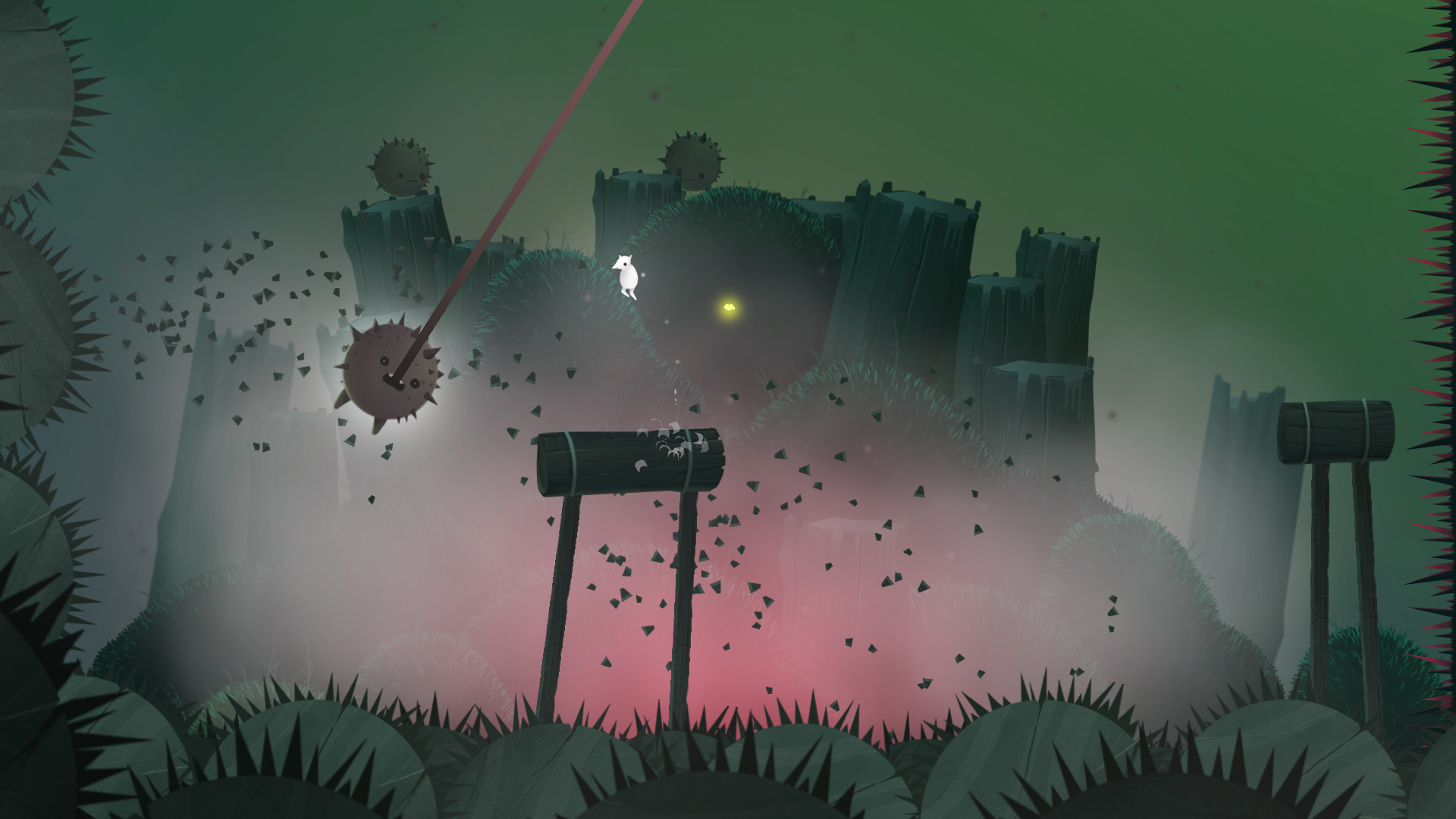 Sheepo is a true to form metroidvania in the classic sense, but this one has no combat. And no arms. But is pacificism your thing? The Finger Guns Review:

So when I got hold of Sheepo and took a first look at the screenshots and trailer, the designs of the little white creatures, with their simplistic almost skeletal structure, took me right back to my childhood in the early 90s and an old BBC TV show called FunnyBones. In a dark dark house there was a dark dark cellar etc, and in that cellar some skeletons lived. There was a big skeleton, a little skeleton and a dog skeleton. The world of Sheepo is populated with what I imagine the rest of the world of Funnybones is, strange white bone creatures that are equal parts cute and creepy.

Sheepo is a metroidvania is the most classic sense of the portmanteau, and its design choices hark back to the genre’s heyday in that same era. Gain abilities as you explore a 2D world, and each new ability gives you access to hitherto unreachable, unattainable areas. Rinse and repeat. If you are a fan of the Metroidvania subgenre and need a new fix, read on.

The story of Sheepo starts like a climate-aware Metroid. You land on an alien planet, but instead of Samus Aran, you play as Sheepo (Sheepo is a Sheep-Thing – who’d have thought? – a white bipedal sheep with no arms, and barely any resemblance to a sheep), who works as an intergalactic RSPCA agent, visits uncharted planets Star Trek style and collects the eggs of strange and weird alien creatures. These are meant to be brought back to the ship and catalogued, studied etc and then it’s on to the next planet. But Sheepo also has a quirky power. He/She/They can use the DNA of any creatures they have found the eggs of, to shapeshift into that creature. Useful in a metroidvania, when you need new abilities to get you places. Almost designed.

Every now and again you are aided by the snarky call centre operative who is on the other end of your radio. They have a few good lines, initially tasking you with saving the universe on your first day on the job, but mostly they dispense tutorial info and disappear on you at crucial moments before bosses. However they do humanise an otherwise quite lonely game.

The narrative is simple, but it serves its purpose for the five hours or so you will be exploring the world of Sheepo. I got a warm feeling saving creatures from harm, but mixed feelings about stealing their eggs. Ah well, in the name of science, I suppose. Sheepo can double jump, wall bounce and use white boost points to get around, and the controls are simple and tight. There’s no floatiness or lack of response. When you happen across your first egg, its that of a longbird (I’m not sure about the effort that went into naming these creatures). The egg warps back to the ship, and you can now shapeshift into a longbird every time you encounter one, and flap your way up to higher ledges and areas, or over spike pits. But only for a five second window. Of course, this means that there are creatures strategically placed around the world to give you the powerup you need at the right time. But no more and no less.

You work your way through puzzles from left to right, and each time you get a new creature’s egg, usually after a boss, then its worth going back through the previous screens and areas, and finding the other versions of that creature that will now allow access to new areas. Metroidvania 101, basically. The spineworm creature gives you the ability to tunnel, the slime gives you the ability to slime up and down walls. Like any good metroidvania, it’s all about backtracking, so you won’t find fast travel (unlocked by the froggo creature) until about half way through, but considering the game’s length its hardly necessary.

Therein lies one of Sheepo’s pitfalls. It is woefully short. And for a game about saving creatures from extinction, there a remarkable lack of species and very little invention when it comes to the creatures on offer. A skeletal bird, a worm, a slime, a frog. Maybe the situation on the planet is more dire than I realised going in, and these are the last six species left, but it felt very thin when some games come with dozens and dozens.

And that’s the issue with content too. Beyond the main quest, there is little to do. You can earn feathers as you play, by taking the slightly less obvious paths, and doing a few more challenging puzzles. Feathers can be used to buy about three things in total; a save point locator, an art gallery, and a very expensive elevator key. I assume you need every last feather in the game for this so its one for the completionists and I don’t know what’s up there, but I did find the entrance. Beyond that though there is little to keep the average player playing.

One thing you could take as a negative, but I saw as a positive, is that there is no combat in Sheepo. They have no arms, and therefore no ability to hold a gun or laser, and no melee skills. Bosses are pretty much always beaten by a strategy of avoidance until they do something wrong, or you lure them into hurting themselves. You make one of the bosses fire its own gun on itself and another crash into spikes. I enjoy games that try to do away with the constant cycle of violence that most gaming is these days, and Sheepo is notable in that regard.

If saving a handful of funny boney little creatures over five hours feels like enough to justify the price point then, its not a bad Metroidvania by any count. It’s just a formulaic one.

Sheepo has a nice concept; steal eggs for science, shapeshift into creatures and solve puzzles in a metroidvania world. It’s notable for its combat-free gameplay in a genre that often sticks a blaster in your hand. However, it never really rises above the formulaic to fulfil its potential, and it lacks content past the five hour initial run.

Sheepo is launching on PC via Steam (review platform) on August 26th, 2020.

The Best Games Of 2022, As Decided By A Bunch Of Kids
Super Arcade Football Review (PC) - Life's A Pitch
Ripstone's Poker Club gets priced and reveals new gameplay video.