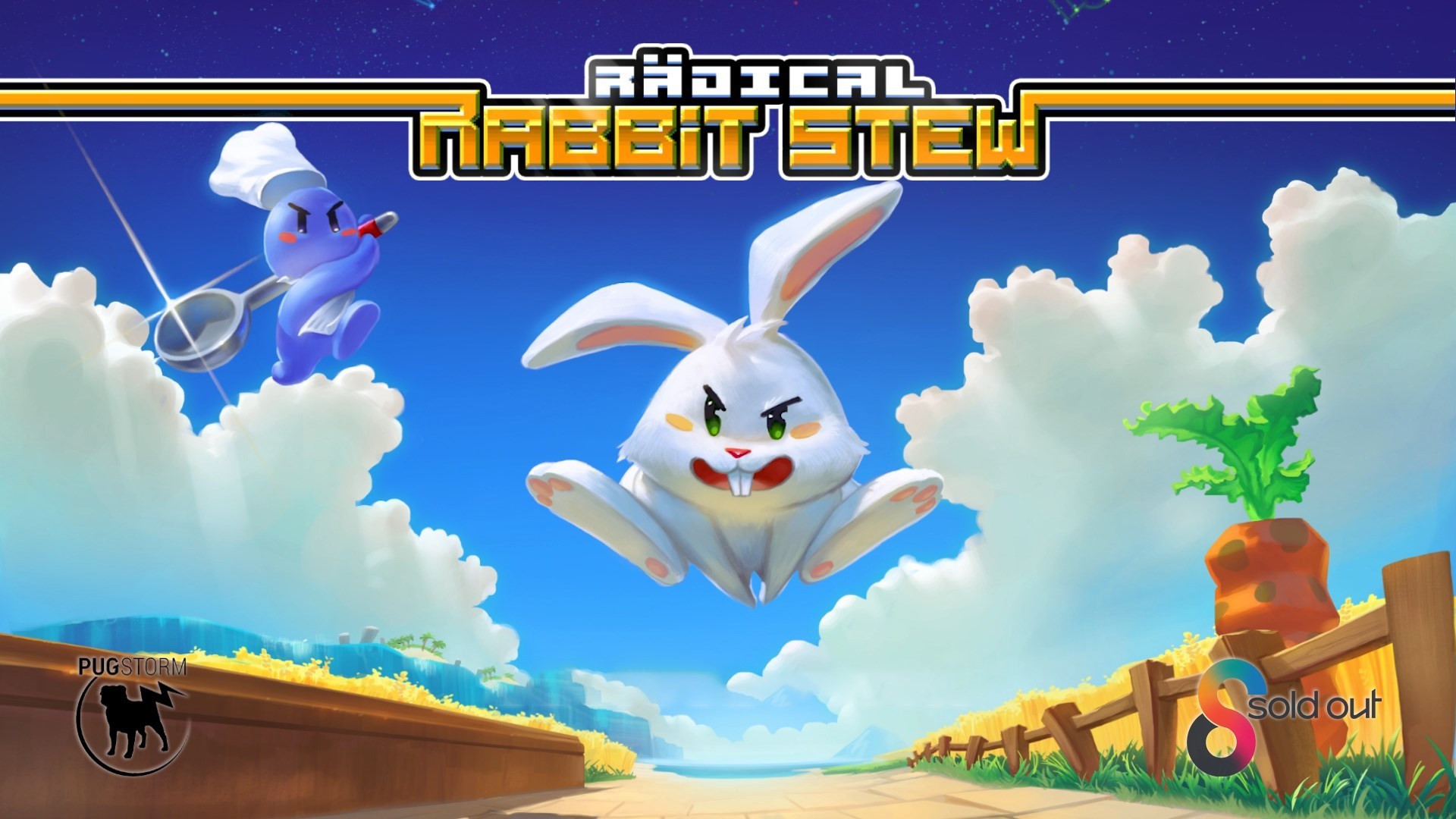 A ridiculous ricocheting rabbit rush, Radical Rabbit Stew is an old school platform puzzler with the ingredients of a great meal. Rabbits, fun and a seasoning of humour. But is it a recipe for success? The Finger Guns Review:

Radical Rabbit Stew is about as mad as its name implies.

The game opens with a premise, but you know what, it hardly needs one. You don’t really need an excuse to start smashing rabbits around, but I’m glad it did, because someone in the development team is completely nuts.

The Rabbit Queen is bored of just eating vegetables, because yuk. I get it. She wants some meat in her diet. So she’s set her sights on the Space Diner, and its three Michelin starred chefs who produce the galaxy’s most delicious food. As petulant villains are wont to do, she sends her rabbit legions (one presumes it takes no time at all to raise a rabbit army, because they breed like, well, rabbits) and puts the hurt on the diner, animal-napping the croc and octopus chefs and having them incarcerated. But her armies left the little kitchen boy under an overturned pot, didn’t they? A good villainy rule to live by that I learned recently from Harley Quinn; Always End The Bloodline. Or in this case Never Leave Anyone Alive. Otherwise they will seek bloody revenge on you and unravel your whole evil scheme.

You play as Kitchen Boy, a blue creature who I have no clue what type of animal he is meant to be, and you have escaped unscathed from the rabbity destruction. Armed with your trusty wooden spoon and chef’s hat, it’s clearly time to make mo’f*ckin rabbit stew.

And so begins a dark twisted tale of violent bloody revenge that would make Ellie from the Last Of Us 2 turn away in disgust. No sorry, just kidding. Radical Rabbit Stew is madcap and full to the stewpot brim with quirky animations and witty comments. It never takes itself seriously for a second. From the treasure stewpots that grant health hearts which it proclaims are not just quarter hearts, to the thug-life dark shades that Kitchen Boy wears each time he dispatches another level full of rabbits to their gravy, sorry graves, everything is done with one eye firmly winked.

The Diner of course is at one end of Bunlands and your quest to get to the queen and save your cheffy friends is all the way at the other. You are given a world map level hub that is a pixelart homage to the old Super Mario World hub, and functions something like a mobile game would. Take on each puzzle, earn the next one, move on. Thankfully you don’t have star ratings or any sign of pay-to-win micro-transactions. Every few levels you get a power-up, be it a new spoon or a few extra health points and the game slings you along at about the same clip as a flying rabbit.

The gameplay of RRS can be summed up as ricocheting bunnies off bumper springboards into the Creuset pot where they deserve to be. The puzzles start as simply as thwacking one bunny with your wooden spoon into a pot, but after six or so levels, you are facing multiple bunnies and routes to ricochet them back and forth across the level. Gameplay is constantly changing up from what initially looks like a small formula. New types of rabbits are introduced like the lazy fat stinking rabbitses that need an extra powered up silver spoon attack to move them, or the red bomb rabbits that explode on contact. New powers change things up too, like the carrots that project stink beams down each path of the level – if a bunny crosses the stink beam they will throw themselves at the carrot often breaking walls and obstacles that you couldn’t reach or access. Unfortunately this particular carrot mechanic was criminally underused.

I had been honing my ricochet puzzle skills on Crosscode this week, so was well ready to swap light balls for flinging rabbits. Only in Crosscode you aren’t faced with the item you are throwing, turning round and eating you at a moment’s inattention. They just straight up eat you. No messing. And then burp. Thankfully you have more than a fair share of weapons to hit back. Wooden spoon is your basic thwacking utensil, silver spoon knocks them for six, and eventually you unlock the grabby hand spoon, which does unspeakable things to rabbits – it picks them up and throws them bodily across the levels, into pots, bumpers, half-pipes, you name it.

First trophy I got was for setting a bunny off between two bumpers, watching it bounce back and forth, faster and faster and faster until it reached a frenzy and exploded. Ping, trophy pop. Not sure there’s a more satisfying way to get one. I’m not usually one for games where animals are harmed. Give me Pokemon Snap over Hunting Simulator, but these rabbits, gosh darn it, they’re evil and must be punished.

Bosses are quick and pretty basic all told, but they can be fun once you’ve begun to master the fast controls. The first bunny boss is quite something to behold. In this world, bunnies seem to have been crossed with Easter chicks and can now lay eggs. Remember what I said about them breeding fast. The boss lays eggs by the six-pack, which crack open and out pop more bunnies. Of course your trusty spoon does nothing to a boss bunny, so you need to use their own children as projectiles, knocking them into the larger bunny’s face before he squishes you.

Another boss is named Pugs Bunny (he’s a Pug with bunny ears) but what’s fun here is you don’t actually attack him, you attack his train set. Each thwack of your spoon derails another train, again and again until his gets so irate his head explodes. There’s just something great about bosses like that.

Radical Rabbit Stew is not that demanding to play. You don’t actually need incredibly quick reflexes for the most part. Instead what you actually need is your brain. There are often a large number of pots to fill, masses of obstacles and blocks to break with hurtling rabbits, and often only one perversely tricky way to complete the level. The hand grabby spoon is a good case in point; it requires you to rethink how ricocheting rabbits work because you grab from the front, but they go careering off behind you. A few levels around halfway into the second world do offer up a bit of a challenge to puzzle out. Overall though RRS isn’t that challenging. There are trophies for knocking through the game in under two, or even under one hour. Now, no way you’ll do that first time, but with practice and a bit of memory, simple. The trouble is generally that means a certain lack of content.

There are 69 blue coins to collect which will give some completionists a reason to return – usually one, maybe two per level, but again most just require you to think before you fill every pot with rabbit. Perhaps you could use one to knock down the obstacles to the blue coin. Rabbits are rarely a finite resource, and bar a couple of exceptions, the rabbits you need will spawn continuously from eggs scattered at the spawn points. This means its pretty hard to fail a level. You always have a second chance. And therein lies one of the main reasons the game lacks much in the way of challenge.

Though its full of invention within the boundaries of ricocheting rabbits, that is pretty much all there is to Radical Rabbit Stew. It’s not light on content for what it is, but what it is, is a small puzzler with one trick that it does passingly well. There’s a versus mode which might bring another hour of mayhem with a friend or sibling, but it’s rather short-lived, and if you so wish you can design your own sadistic teeth-rattling rabbit flinging courses with a level editor. Unleash infinite rabbit ricocheting loops, with bumpers covering every surface like I did, or, you know, make a level that works.

Because everything is pretty much the same, unless you really get involved in it, Radical Rabbit Stew does start to get a bit dull pretty fast. It seems there really is a limit to how long you can play a game where you fling rabbits around (who knew?) and it seems to be about two hours, when that trophy pops. It’s better than a mobile game, because it’s on console and you can use buttons, but please don’t go in expecting much more than that formula. Probably best played in a dozen bitesize sittings than one marathon.

Spellbound : The Magic Within Review (PC) - You're A Witch, Ari
Arenas of Tanks Review (PS5) - Tank and File
Out Of Line Review (Switch) - In Line for a Good Time