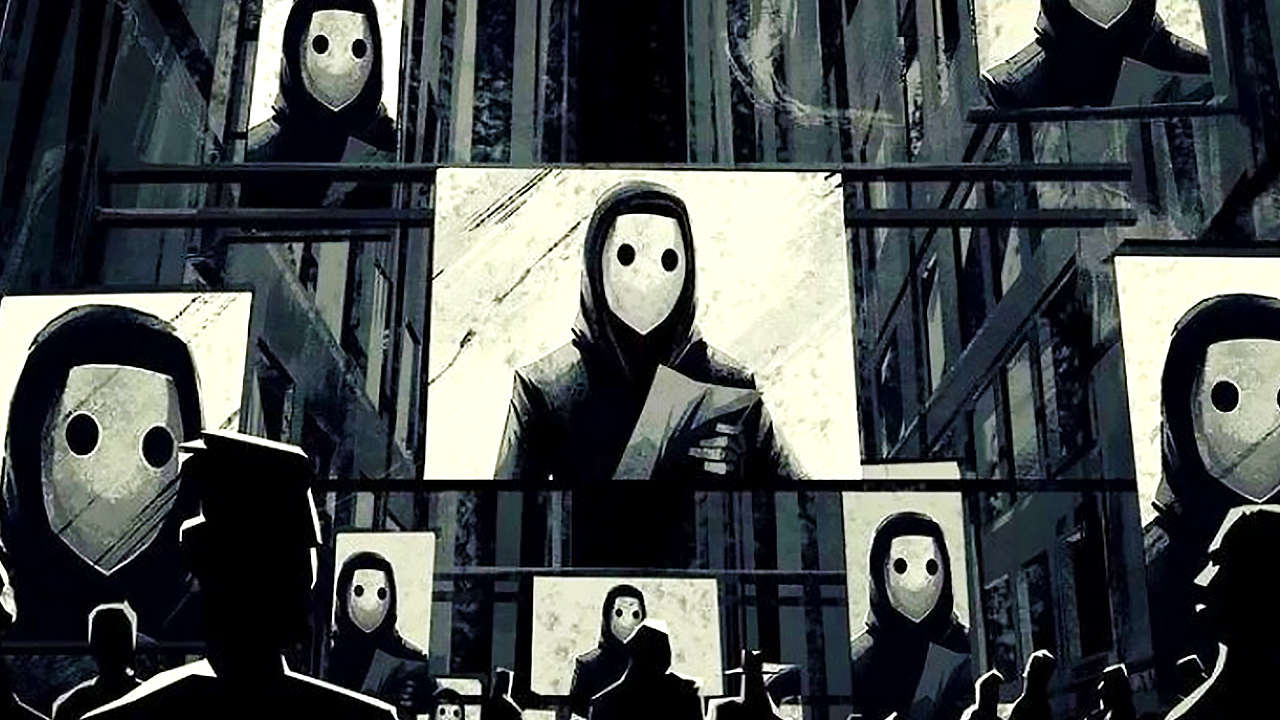 A new take on the interactive graphic novel/platformer style, Liberated is a welcome addition. But is its painfully obvious "down with the system" message too over the top? The Finger Guns review:

It’s a sad state of affairs at the moment. The world is going to pot, totalitarian rule seems to be creeping in, and your social life is constantly being monitored and stored to keep you in line.

Yet at least we have videogames, that format that allows you to enter a state of escapism, a means to switch off from the real world.

What better way to unwind than to play that focuses on over-throwing said totalitarian rule and sticking it to the man, etc. But does Liberated offer a nuanced perspective on defying societal restrictions, or its message too ham-fisted and clichè?

So let’s you, me, and the CIA agents monitoring this have a deep dive into the world of hacking and not-quite-Anonymous groups in this Liberated review. So think for yourself, but listen to me too…

V for Virtually Identical To What It’s Copying

The theme of a dystopian, Orwellian future is nothing new. That we now see it as a clichèd subject does make you wonder if we’re just numbing ourselves to what’s being paralleled in real life, but that’s by the by.

Liberated plays this out in quite an obvious fashion, holding nothing back about its themes of government oppression and control through our credit scores, social media and tracking through phones and apps. Yet it takes the social media aspect further, in that if you’re not regularly using it (be it photos or statuses), then you’re flagged as suspicious. The same applies if you’re spending beyond your means, or not spending according, making sure you keep in line with your pay grade/societal status.

Whilst it may be a bit too on the nose, it’s also not as farfetched a concept as you might think. After all, we get targeted adverts and the fear our devices are listening in already…

You, Barry Stroud, are flagged by the authorities for hopping a ticket barrier at a train station. A minor infraction, you might think. But we soon discover that Mr. Stroud is a Johnny Lee Miller type, and has to rush back to his apartment to encrypt his hard drive. Turns out this Neo-Noir Neo has his fingers in many digital pies, with this misdemeanour only being a smokescreen to a much bigger plot device…

Liberated’s immediate selling point is in its aesthetic. The use of comic book narrative is nothing new in gaming, but it does compliment both mediums well. Whether it be as a story telling device like the first two Max Payne’s, or as fourth wall breaking mechanic seen in Comix Zone, Comic Jumper or even Deadpool, Liberated has done something that borders both (which we’ll get into soon).

Stylistically, the game presents much like Frank Miller’s Sin City, but without the random interspersed colour moments. In fact, the only colour that does appear is the damage patina of red bordering the frame, whilst everything else is straight black and white.

Cutscenes play out in panels, and dialogue is pure graphic novel, right down to the speech bubbles and onomatopoeic noises of your environment. Gunshots ring out, both audibly and on-screen, as do dramatic sound effects during an early car chase seen.

There’s Not A Lot In The Shadows

Gameplay itself is 2.5D: you can run, jump, climb and shoot along the 2D plain, whilst the world around you carries on in 3D. Essentially, Liberated plays like Shadow Complex that’s had an Inside aesthetic draped over it. As I’m playing on a Switch Lite, it’s very well presented. A reflection on the game as a whole: not massively deep, but suits its tone well.

But for those playing on a regular Switch, or indeed any other bigger-screen-accomodating console, I’d imagine it would disappoint. Whilst the world does continue in the background, there’s not a lot of it. Liberated screams Arcade game: not as a knock against it, but more towards something you’d see on Xbox’s Summer of Arcade than a title to rub shoulders with a AAA title.

That being said, given the overall tone of Liberated, it fits. Having cutting edge graphics would look jarring against the grainy noir attitude behind the comic panels. It reminds me of XIII, in that it accommodates its cutscene aesthetic across to gameplay. Comic panels aren’t flat, so the transition to taking control isn’t necessarily seamless, but it doesn’t detract from the presentation.

It’s Not As Simple As Black & White

In contrast to its simple gameplay, Liberated makes up for some depth with its story. Now, I said at the start that you play as Barry Stroud; hacker extraordinaire and son of an unpleasant authoritarian.

But you don’t just play as Stroud. Without wishing to give too much away, the use of several characters playing at different story intervals is the game’s strong point. As you could possibly imagine from a game about hacking, covert groups and “fork the system” ideologies, there’s also more than meets the eye.

Taking elements from films like The Matrix and Hackers, as well as games like Watch_Dogs, the Liberated lack any kind of originality in character design. Of course you’ve got your genius who’s works were turned against him, of course there’s a cold, badass Trinity type in the mix. There’s even a tank of a man and his God-fearing brother, just to make this motley crew as box-ticking generic as possible. But if Liberated is going for tribute over originality, then why not ape your peers?

The problem with having several playable characters in the same type of game is that they are essentially just skins on the same template. Whilst it would make sense that some characters are adept at handling guns, why can Barry suddenly hit between the eyes of a guard some thirty feet away?

Again, without wishing to spoil, as the game ramps up and the Liberated start to enact bigger and more questionable acts of terrorism, gameplay tends to devolve into just shootouts with the occasional puzzle thrown in, regardless of who you play as. Of course, this is the nature of most games: you start off finding your feet, becoming a veritable badass by the end of it. It’s just a shame that despite playing as several characters at different story points, you’re all of that same level of “ability” by the end of it.

I’m Here For A Good Time, Not A Quick Time

Whilst the core gameplay reminds me very much like Deadlight, Liberated’s weakness is in the “interactive novel” side of things. I don’t mean having to press A to progress to the next panel, that lets you read the story at your own pace.

Instead, I’m talking about the absolute myriad of Quick Time Events strewn throughout. Dialogue options are fine, as are the occasional fight/flight moments that add slight variety to story progression. But when it comes to a car chase, that is in no reflection of the main gameplay, I’d rather just watch it play out instead.

It happens more than once, sadly. What could just be an interesting cutscene for you take your hands off and watch suddenly becomes a QTE. Whilst loading times aren’t the biggest issue on the Switch, having to replay the whole thing because you missed the last prompt is a right pain.

The other issue that occasionally affects Liberated are some screen juttering bugs. For a game that doesn’t look graphical intense, these are slightly inconvenient. But, they’re not game breaking, so it’d be unfair to mark it down because of that. Not that we should rely on patches down the line when you want a complete game out of the box, but it’s hardly fair to take it out on indie developers.

A Best-Seller In The Making

Technical issues and insipid QTE intrusions aside, I had an absolute blast with Liberated. It’s hard to summarise the story on a whole without spoiling it, and you won’t thank me for doing that.

The graphic novel approach lends itself well the the kind of story its telling, with each “issue” being another perspective. Analogous to real life, you’ll want to unlock the next one to see what happens next.

As I said, the whole “authority is bad, we wanna be free” message is a bit too blatant at times, but that doesn’t detract from the story it’s trying to tell. The overall experience tempers the over-the-top “Hack the planet!” message, balancing it out into a well written espionage/underground thriller.

It may not look next-gen on your 4K TV running through your PS4 Pro, but it doesn’t need to. Conversely, I thought it was well suited to something like the Switch: much like a comic, you hold it in your hands and flick through at your own pace. In that regard, Atomic Wolf have nailed it.

My initial thoughts were that it’d be corny, with a bunch of generic edgy characters. And whilst it does have those, it also offers a wider look on something bigger going on. I just don’t want to risk ending up on any lists by spoiling it for you. They’re always watching, y’know…

Slightly janky at times, Liberated offers a cracking story for all you script kid/Watch_Dog fans out there when it opens up.

Liberated is available now on Nintendo Switch (reviewed on Switch Lite), PS4, Xbox One and PC.