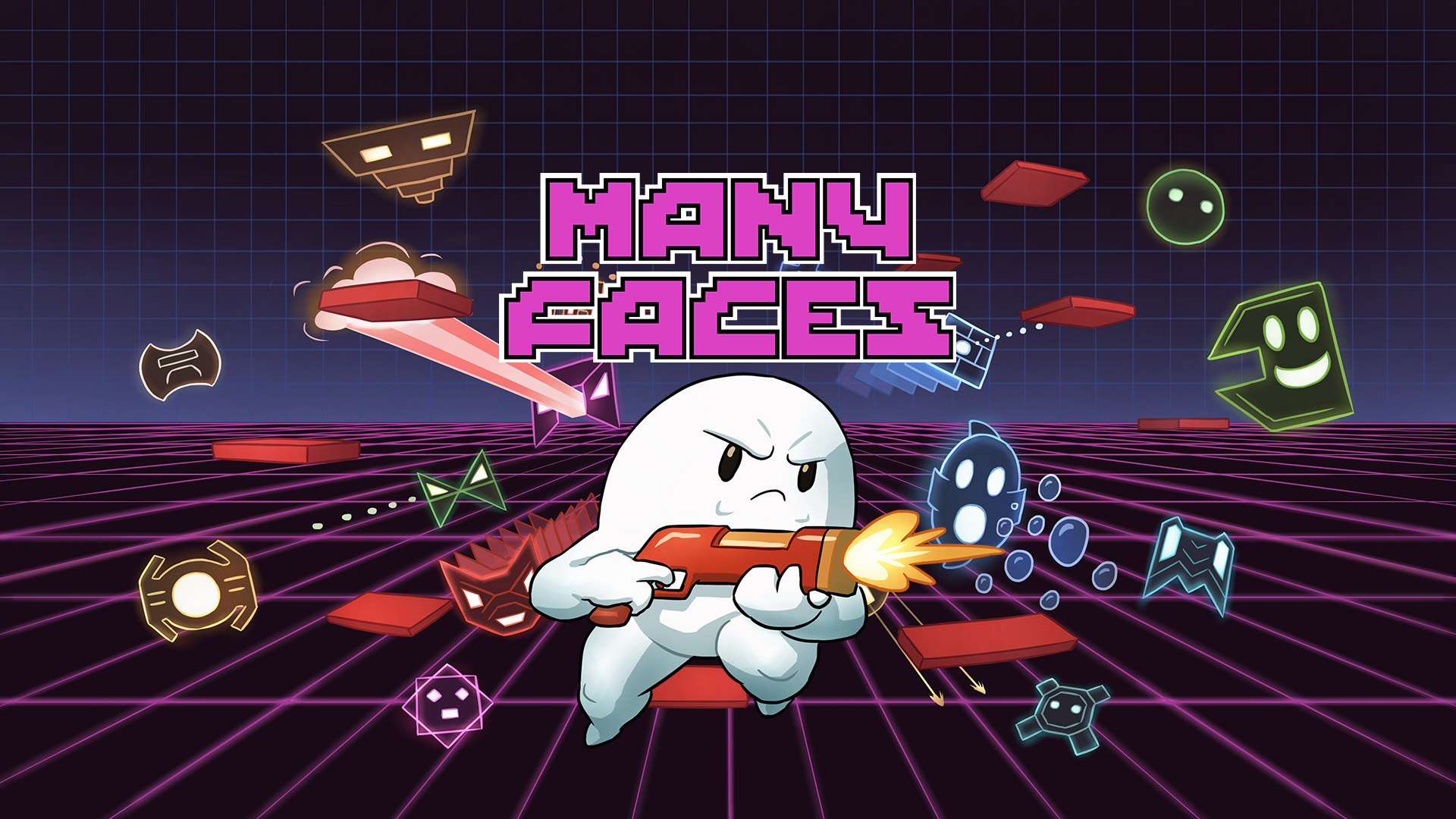 A retro inspired shooter, Many Faces is fast fun with a pleasing amount of variety but it lacks some features that would give it much more longevity. The Finger Guns Review.

The hero from Many Faces, an egg-like being with disembodied shoes as their only limbs, was taking a nap on a rock while holding his gun (y’know, as you do) when he was abducted by a UFO. Thus begins a fight against the alien forces, the “Many Faces”, that exist on this ship. This isn’t Shakespear by any stretch of the imagination but it’s in keeping with the window dressing you’d get with the 80’s/90’s game this is inspired by.

Many Faces is a retro inspired arcade shooter. Each 1-screen level is self-contained and tests the player to destroy the 2 waves of foes that spawn. Like a twin-stick shooter, you can aim your fire with the right stick while jumping around the level to avoid the incoming fire. You can jump through platforms but can’t shoot through them (something the enemy faces can do). It’s simplistic but it’s a formula that worked 15 years ago and still works now.

There’s just 1 game mode in Many Faces which consists of a single run of 17 randomly generated levels chosen from a pool of 50+ normal levels and 7 boss levels. Each level has a unique structure which makes each of them a little different to navigate. Some levels have blue platforms which shoot beams of laser on a timer. Others have spikes that cover the bottom of the screen. Hollow platforms will fall away a few seconds after being stood. It’s all classic stuff but as each run is a shuffle and random, you’re always adapting.

In these levels you’ll face off against 13 different types of aliens, all of which have a different attack pattern. The threat level these enemies pose differs greatly. A bubbly smiling face seems to do nothing other than float in your general direction while upside down pyramid faces cycle across the screen dropping bombs. A green triangle thing bounces around the screen at timed intervals while X shaped faces can turn the screen into a bullet hell game if you’ve not quick to destroy them.

After you’ve finished off the second wave of enemies in each level, a chest appears. In this chest there’s either a heart which expands your current health or a hat. These hats are what keeps Many Faces interesting. Each hat has a different effect. Enabling triple fire, wrapping the hero in a shield or replacing his usual gun with different weapons like bombs which take time to explode, bananas which boomerang around the level, a rail gun which totally destroys the Many Faces but costs health to us and loads more.

The effect these hats have is displayed above the hat when you hold down triangle on the controller. The font the game uses – both in these descriptions, menus and in the title – is a little difficult to read so it can be a little unclear some times. The descriptions will overlap each other too so if you’re standing close to a hat and you’re already wearing one, one of the descriptions will be covered up. It’s a touch annoying.

Every 4th level in a run is a boss fight. These bosses vary in difficulty and quality but they’re almost all fun. There’s one – shaped like a boat – which sticks out as being just not up to the standard of the rest. Some of the bosses can be cheesed too which is a shame. Head into some of the bosses with a full health bar and you can defeat them without ever having to dodge any danger with a few heart segments to spare.

Many Faces is sorely missing some elements that would make it enjoyable for longer. Played on easy mode, a run takes around 15-20 mins. After it has been completed 3 times, there’s really no more content to be seen. Online leaderboards and a scoring system are non-existent but seem like a no brainer for Many Faces that would have given it far more longevity. Co-op or multiplayer would have been a really nice edition too. It’s odd that modes that usually appear in these games – a boss rush or arcade mode – are not included.

A bopping 8-bit soundtrack and an interesting variety in game play-altering hats are the main positives from Many Faces, a retro shooter that’s otherwise short on content and game modes. If you’re hankering for a game that looks like it comes from the late 80’s/early 90’s and can keep you busy for an hour for a few pounds Sterling, that’s what you’ll get here. It is sorely missing multiplayer, leader boards and game modes that could really elevate it to bigger and better things. Maybe in a sequel…

Many Faces is available now on PS4 (review version), PC, Xbox One and Nintendo Switch.