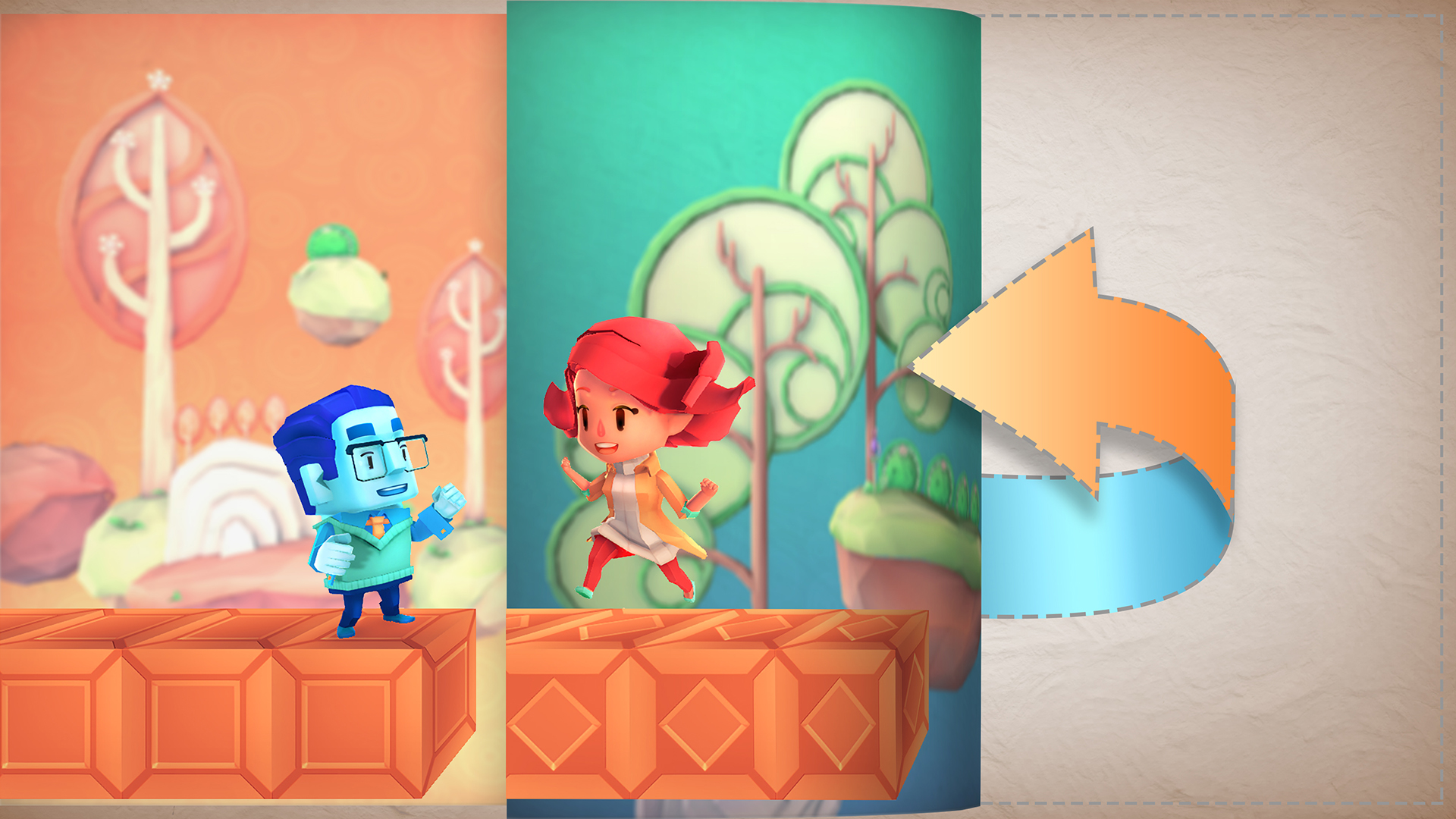 A unique puzzler that pulls on the heart strings, A Fold Apart is a little short and stops short of exploring its best ideas. The Finger Guns Review.

A Fold Apart begins with a couple very much in love. There’s a montage of them doing things that lovers do. It’s portrayed entirely through living photographs, without vocals but backed by a lovely piano soundtrack. It’s really quite beautiful. Then something happens – the unnamed man gets his dream job, but he’s going to have to move away to the city in order to take it. He goes and the two of them look hopefully towards a long distance relationship. Of course things don’t go swimmingly.

Each of A Fold Apart’s 6 chapters begins with a text message conversation between the pair. Their worries and insecurities about their strained relationship coupled with how text’s can be misconstrued or misunderstood sends either or both of the couple spiralling with fears and conflicting thoughts. The narrative in A Fold Apart uses those hurdles anyone in a long distance relationship has to go over in an emotionally charged plot that surrounds the puzzling.

The core puzzle mechanic in A Fold Apart is entirely unique and unlike anything I’ve ever seen before. The entire game is presented through photographs and images that are placed on what looks like a table. These images are like windows into another world – as the camera pans you can see that everything inside the image is 3D rather than 2D.

The kicker is that each image is always 2-sided with another window to another world on the back. With a button press of L1 or R1, you can flip over the image to see what’s on the other side. The aim of each puzzle is to either make it to a pre-defined exit or to collect a star token which will create an exit for you. There’s never a straight walk to this objective though. There’s always massive gaps or obstacles in the way and the character’s can’t jump. In order to get to your stars, you need to fold your image.

Using the right thumb stick, you can bring in the edge of the image, folding it over which unveils the world on the other side. With a click of the X button, you commit this fold and whatever was on the back side of the image now over writes what was on the front. A platform that was on the left of the back image can be brought in on the right of the front image. Line it up (remember, you can’t jump so it has to be seamless) and commit the fold and you can walk onto the platform.

What’s more, you can reverse a fold and fold multiple times. Step onto a piece of the image that’s from the back side then press the circle to cancel the fold and you’ll be sent to the back of the image alongside that section of the image. Need to bypass an obstacle? Consatina the images so that you can walk straight past them.

As is typical for puzzle games, new mechanics are added gradually. Each chapter includes a new puzzle element to first understand then overcome. With chapter 2 comes the introduction of boxes that can be pushed and climbed over. Later platforms that disappear when folded are included. Folding around these platforms can be quite head scratching at times. Rotating the image is introduced but despite spinning the image, gravity still pulls in the same direction – downwards. Ensuring that you’re not sending your character falling to their doom becomes a consideration. Towards the end of the game, you can start to fold diagonally, peeling back from the corners of images. This is transformative, changing horizontal platforms on the right of an image into vertical ones from the left. Each puzzle element layers on top of the last so that the conundrum’s they pose become ever more elaborate. For the most part, the puzzles are well put together.

The game stops short of really using its best ideas thoroughly enough though. By the time you’re on the 6th and final chapter, all of the puzzle mechanics are on the table and yet the puzzles don’t really feel any more challenging than it did in chapter 3. That’s because almost all of the head scratchers in A Fold Apart can be completed with a little trial and error. Because of the lack of a jump button, the player knows that any platform you want to walk on too must line up exactly with another. I solved so many of the puzzles in this game simply by peeling back the edges of any available side until something lined up and I had somewhere to go from.

The last chapter doesn’t take the opportunity to combine the best mechanics in the game too. When you get to fold the corners of an image you also get to fold these images again. You can twist these images into origami if you really wanted too but the game doesn’t ever require that of you. It’s odd that you can fold an image repeatedly from the corners but it’s never the solution to a puzzle. This could have been a really engaging way to make the last batch of puzzles a challenge.

The delivery of the narrative is a little disappointing in A Fold Apart too. The game’s story itself is poignant and will be a painful reminder to anyone who has gone through something similar but its impact is limited by the way it’s presented. There’s no vocals in the game and the story beats are delivered via text that appears either in the spaces between puzzles or superimposed on the puzzle images themselves. At times, A Fold Apart has sentences flowing in different directions after each word or appearing one word at a time. The pace feels slow because of this.

Which is odd because A Fold Apart lasts between 3 and 4 hours which is quite a lot less game than I was expecting. This length includes some pet peeves of mine – restricting the character movement to make them slow as they’re feeling sad. It certainly feels like the game finishes before it reaches a satisfactory peak.

The art style and soundtrack really save A Fold Apart from mediocrity. After their initial separation, the art styles for the couple diverge. The woman, out in the country, has levels adorned in warm colours. The man in the city has cold levels with straighter structures. It’s quite symbolic, how the world feels less colourful when each character is apart from one another but becomes vibrant and lively when they’re together. The soundtrack is filled with lovely piano driven tunes that’re really lovely and match the art style perfectly.

A Fold Apart ends before it manages to make the most of its genuinely unique puzzle mechanics. It feels like there should have been another chapter to the game, really diving into the ingenious mesh of puzzle elements that too often require little more than a few seconds of trial and error to solve.

The story A Fold Apart tells is a powerful one, unfortunately undercut by the way it is delivered at times but a beautiful piano soundtrack and art style that’s deeper than it first appears helps it stick the landing.

A Fold Apart is available now on PS4 (review version), iOS via Apple Arcade, Xbox One, Nintendo Switch and PC.