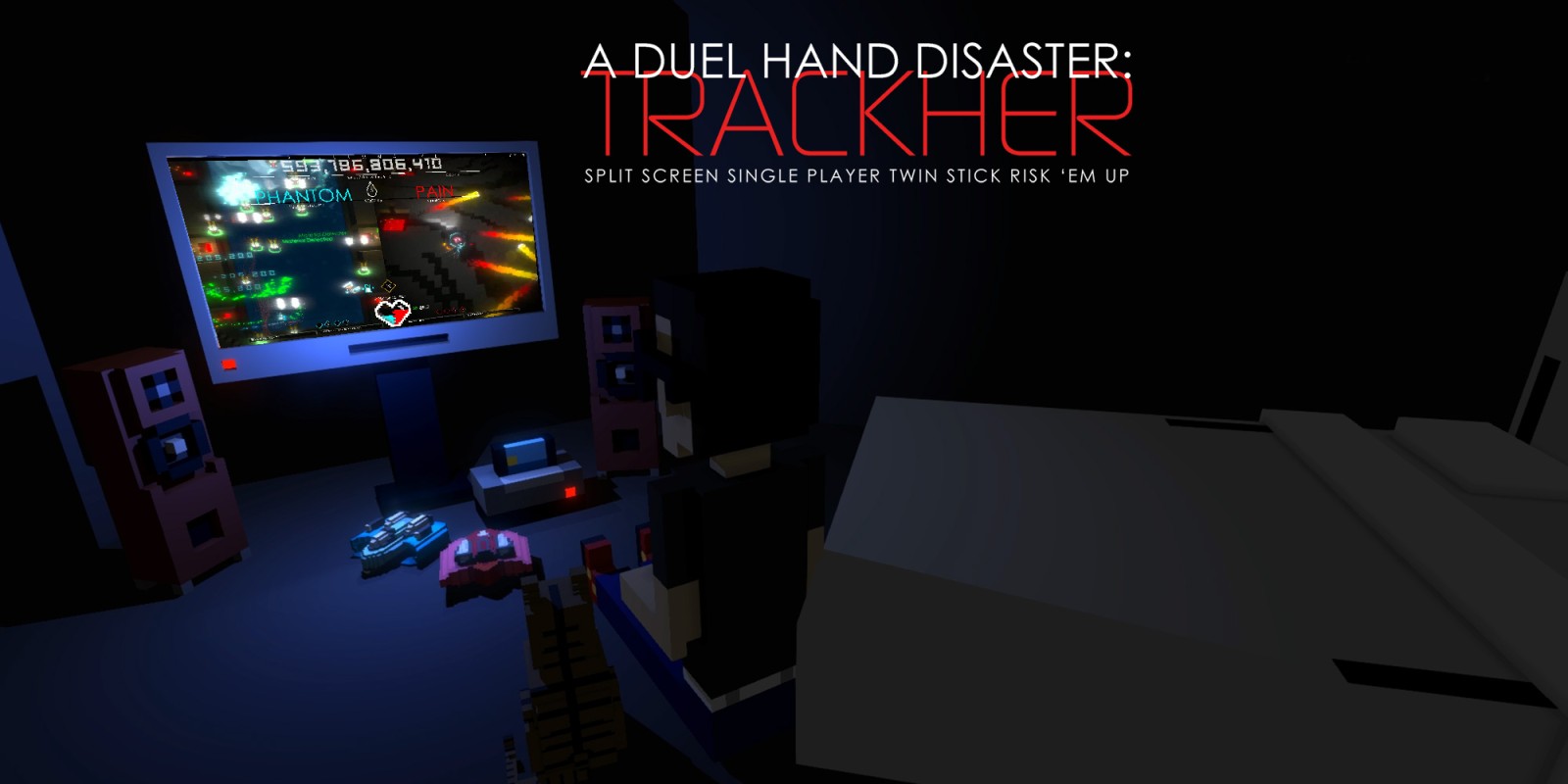 An infuriating, brain-melting puzzler that once cracked is a fun distraction. A Duel-Hand Disaster: Trackher, The Finger Guns Review;

An infuriating, brain-melting puzzler that once cracked is a fun distraction. A Duel-Hand Disaster: Trackher, The Finger Guns Review;

There are times when we’re sent a game to review and I just want to scream to any potential buyer that it’s simply not worth even considering given how there is simply so much else out there that is far more worthy of your time. I don’t want to go into the nitty gritty of why, only because the point should already be able to be made in a single sentence rather than fifty-odd. Regardless, I have a duty and today that’s to review A Duel Hand Disaster: Trackher. Not only possibly the worst named video game in the history of time but perhaps one of the more bizarre video games that I’ve come across in my lifetime.

Look, no messing around here; Trackher is difficult. Very, very difficult. To kick off, it’s a twin-stick arcade shooter, with the screen split in two so on one side you focus on shooting enemies in one ship, the right has you grabbing materials in another and you control each with the respective analogue stick. The left side is invulnerable to attack but low on fuel, the right side ship susceptible to damage but with unlimited fuel. To say this setup, initially, is infuriating feels like I’m doing a disservice to other infuriating things. Binaries feels like a walk in the park in comparison.

I’ve always thought this was standard for most games but here, for gawd’s sake, get your ass to the tutorial before you do anything. If you jump in blind you’re going to want to throw your Switch under a train within minutes. The main gameplay screen is obscenely busy if you don’t already know what you’re letting yourself in for. It would be an understatement to say it’s intimidating.

A good example would be when I realised that the ship on the left was invulnerable, so I was able to freely take people out without much bother, even though I had to move to different areas slowly to conserve fuel intake. Enemies would then move to the right hand side of the screen to take down the vulnerable ship. It will take a little while to get your head around this but it becomes a far more tactical experience once you’ve broken through the initial difficulty barrier. If you’re finding it all too easy though don’t worry, every few minutes a ring of fire appears closing in on the right hand ship, forcing you to move to a safe zone. If you’re unaware of such things occuring, you simply won’t know what you’re meant to do. As I mentioned above, the game does a frankly terrible job of explaining itself in-game, so the tutorial is essential.

It took me a few days to really pin down what I thought of A Duel Hand Disaster: Trackher. On recent podcasts I’ve briefly discussed the game – without even remembering its ridiculous name – and slated it. I’m still not the biggest fan of it, I can’t get to grips with why the tutorial is hidden away and how complex and unwelcoming it is to new players, but I sort of understand it a little more now and as I felt ready to write the review, I definitely don’t hate this game at all. There’s a fair amount of depth to be found in these puzzles, and it’s original enough to warrant more than just me tearing it apart because I wasn’t very good at it in the first couple hours.

You’re never going to find it easy, and there’s far more exciting Switch puzzlers out there and on the horizon, but if you’re looking for something that’s going to either infuriate or grab your attention through originality and utterly bizarre mechanics that you rarely see elsewhere. Well, you could do worse.

Oh, and the soundtrack is rad.