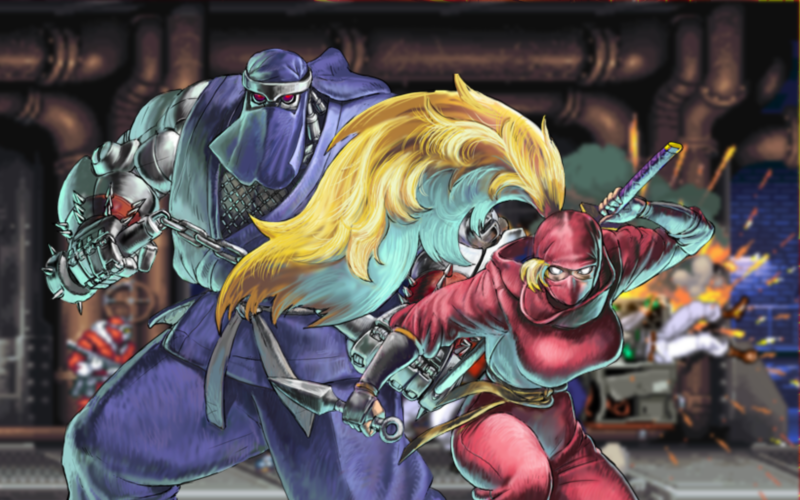 Paul is back in his comfort zone with The Ninja Saviours. The Finger Guns Review;

Paul is back in his comfort zone with The Ninja Saviours. The Finger Guns Review;

Gaming at the moment is great. For me, not so much for all the high budget AAA titles that we are being treated to, but more because of the revival of classic genres that were thought to be long dead, along with the 16-bit era of gaming.

However, in recent months the unexpected renaissance of the side scroller has made me a seriously happy gamer. Having been treated to the delights of Contra clone Blazing Chrome, the imminent release of Streets of Rage 4, and now we have a good old-fashioned side scrolling beat-em-up which just oozes 16-bit charm; The Ninja Saviours: Return of the Warriors, a remaster which I couldn’t wait to get my hands on.

Now I like to consider myself a bit of a retro lover and I’m almost certain at some point I must have played all the side-scrolling games the SNES had to offer. But one that seems to have slipped through my fingers is The Ninja Saviours. But perhaps this is due the odd naming. In Japan it’s called The Ninja Warriors Once Again, which is probably the game you’ve all heard of. TNS:ROTW is in fact a remaster of the sequel which came out on the SNES which was called Ninja Warriors: The Next Generation but called The Ninja Warriors Again over in Japan. Confused? Yeah me too. So, in all likelihood, I have played this game before, just under a different name.

Anyway, the best news about the release The Ninja Saviours: Return of the Warriors is that it marks a return to game development for Taito, who were, in the early 90’s, a pretty big deal. Every game you played in the arcade had a Taito logo. Hopefully this is a sign of things to come and we see a lot more remasters of old classic Taito games. Oh, and this is pretty awesome, most of the original developers who worked on Ninja Warriors are back working on this remaster so that’s all kinds of super cool.

So, back to the game. The first thing that struck me, which is something I’m much more aware of now that I’m not a spotty teenager playing games, but as a designer is the pixel art. It is some of the finest seen since my jaw dropped playing Street Fighter 2 on SNES or Streets of Rage on the Megadrive. I mean for a SNES game it looks good, but this remaster adds an extra level of detail, bigger colour pallets and more animation. It just looks sublime, like high-end arcade gaming cabinet.

The game starts with the obligatory character select screen. At the start there are three cyber ‘ninjas for you to choose from. The large but slow ninja, the all-round ninja and the fast but weak ninja, usually reserved for the female character but in this game, refreshingly it’s the man. Even though they are called ninjas they are far from it. No stealthy assassinations here, just big weapons and full on hack and slash carnage, which is just the way we like it.

What is impressive is how different the characters feel. Not just in their speed and power attributes but in their skills and moves too. The basics are just mash the attack button as fast as possible, but there are few moves that are mapped to the directional keys which adds a layer of strategy in an otherwise join the dots type game. For this reason, the characters only move along a 2D plane and not in and out like you can in games like Streets of Rage and Final Fight. This is a good thing though, as a game this linear in its approach needs some kind of strategy and as a result Ninja Saviours has some surprisingly complex combat.

Fisticuffs aside, the game is exactly how you expect, linear with literally no story. Well there is one, something about a warlord taking over the world with an army of brainwashed humans and robots. It’s up to a small collection of rebel prototype robot ninjas to save the day. It’s very of its time and that helps add to the nostalgic magic. The levels are hardly imaginative, the standard subway and military base are present and correct. Although there is nice amount of scenery destruction available, along with some background interactions. Difficulty is fairly steady, with different coloured identikit goons letting you know how tough they are. Rarely, for a game like this do you find much variety in the enemies bar different coloured skins. But here, there is quite a variety of characters which is a nice change. But don’t, under any illusion think this game is re-writing the rule book or adding new elements or even evolving the game to something different. It’s not, I don’t think the developers even thought about such things. It’s a linear and shallow. It is what it is and it’s a beautiful thing.

There is a co-op mode too to add another level of awesomeness and longevity to the game, something the original didn’t have. However, it’s not online, and only local. Online would have been a nice addition, but local is just fine as, that’s how gamers rolled back in the day. There are also some extra characters to unlock once you complete the game, Raiden in particular is a sight to behold. And to keep you coming back, once you complete a level, the speed run options unlock so if that’s your bag, then this game has you covered.

If you’re a retro fan, or a side-scrolling fan then you probably need this game in your life, even if you’re not it’s a good solid blast that should be savoured. The importance of this game can’t be overstated. Bringing back a once dead genre is a brave move, but to have Taito making games again is something that should be noted and applauded. If you can look past the shallow gameplay, and it’s relatively short missions and appreciate this game for the spectacle it is you’ll have a right good blast and a warm fuzzing feel good feeling that reminds you of smoke-filled arcades from your youth.

Ninja Saviours: Return of the Warriors may be out to save the world from brain washed humans, but they may just save a dying genre of games that I miss something chronic.

The Ninja Saviours: Return of the Warriors is available on the PS4 (reviewed on PS4 Pro), Xbox One, PC and Switch in the UK, Europe and Australia. The game will be launching in the US and South America on October 15th.