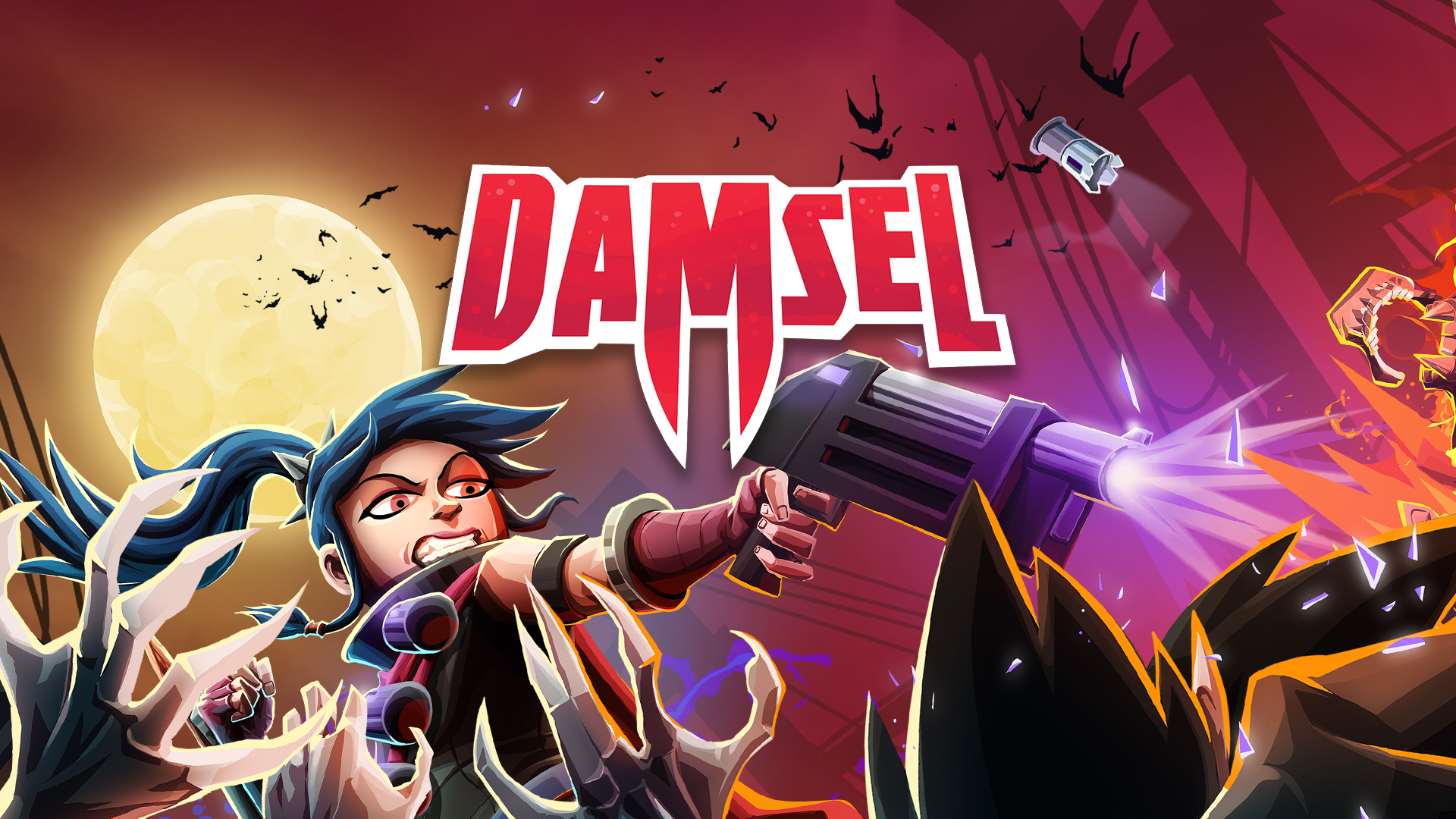 Or, "Considering This Is Called Damsel, It Was I Who Felt in Distress". A cute platformer that would stand out on tablets and Nintendo consoles, it doesn't hold up well on the Xbox. The Finger Guns Review;

Or, “Considering This Is Called Damsel, It Was I Who Felt in Distress”. A cute platformer that would stand out on tablets and Nintendo consoles, it doesn’t hold up well on the Xbox. The Finger Guns Review;

A puzzle platformer with story elements liberally borrowed from Blade and Daybreakers, with a comic-style narrative akin to Max Payne (sans voiceover), it all sounds like a winning formula, right?

Alas, it is not. Nor is it a terrible game like Metal Wolf Chaos is. It’s just very middling, even bland, looking like a game barely worthy of being called “current gen” by normal standards. Much like dating me, looks aren’t everything, but also like me, there’s bugger all substance to really carry it off.

It’s not that it’s not fun (which, as always, is purely subjective). I did enjoy what I’ve played of Damsel. It just has no killer USP that makes it stand out, or the incessant “one more go” nature of say, Hotline Miami, or Trials, or any of that drive that makes me want to keep plugging away at it. Or maybe it’s just me being a sourpuss. Let’s have a look, shall we?

At this point, I must point out that I don’t get any satisfaction in kicking an indie studio on its efforts. Conversely, I imagine they want nothing more than to put their sweat and hours into something, only some perpetual grump engine that is me to tear it apart. But hey, I’m a reviewer. It’s what we do.

So, Damsel then, Screwtape’s platformer that hit early access on Steam last year, has finally gotten its release on Xbox and Nintendo Switch. Despite my snark, I will say that this is a game that works well on the latter. Its cartoon-y stylings suit Nintendo’s darling, in a backhanded compliment kind of way. Whereas I had a review copy on the Xbox, and considering I had Pawarumi before that, this feels like a massive step back in terms of graphical achievement. Not that graphics are a sole reason to buy a game, it’s just that it lacks the spit and polish of other arcade titles on the market.

The story follows the titular Damsel, as she investigates suspicious goings on in the vampire world. For you see, there’s an alliance between the bloodsuckers and the humans, even if it’s an uneasy one. The vampires have a blood drink substitute in Red Mist, yet rumours of real blood being used have reached the Department of Sanguinarian Affairs, the agency responsible for keeping the peace between the two. Armed with a wrist mounted wooden stake, an ultraviolet shotgun and a support crew, Damsel sets out to get to the bottom of what’s going on.

Again, if it sounds a bit too familiar, it’s not difficult to see the influences on it. Damsel and her team have gone for the Blade Trinity-esque sassy squad attitude (also, apologies for reminding you about Blade Trinity), whilst the story is a more radio-friendly version of Daybreakers. If you’re unfamiliar with the Spierig brother’s movie, it involves humans being treated like cattle to aide the vampire race, until things start going wrong. Damsel, however, has it slightly changed with the human/vampire cohabitation story, whereas things eventually start getting suspicious.

At the beginning of each mission, cutscenes are played out like Max Payne or Comix Zone, in that literal style of comic book presentation. Whilst there’s no voiceover, characters certainly like to chatter between panels. Whilst exposition is never a bad thing, considering the quick-paced gameplay on offer, having a conversation between practically every mission can sometimes kill the flow.

Speaking of gameplay though, you can’t fault the game if you want something quick and dynamic. Played out in miniature arenas, most missions take you with taking out a certain number of enemies and/or rescuing hostages to proceed. Or collect a certain amount of an item as well as eliminate the vampire threat. Enemies come in various flavours of undead, with the Mort being your generic hand-cannon fodder. These range from standard, unarmed units, to some that are occasionally equipped with different degrees of firearms to try and inconvenience you. Then you have the Elders; the scrawnier looking, but more efficient version of the Morts.

Then there’s the Charger, and if you need me to explain what he does, you’re clearly lacking in the imagination department. These big bad’s will tank a couple of hits before they turn to ash, but not before smacking you on your arse if you get too close. It’s the Executive enemies that gave me a little smile of mirth though: as the Red Mist production line is, at the end of the night, a corporation, there’s always bound to be businessman stereotype somewhere. Rightfully so, like the lawyers that appear in the Heck levels of Earthworm Jim, the Executives are quite literally middle-managers, including vampire women in little black dresses, all intent on melting you with hot balls of plasma. It was a nice little nod to the very nature of corporate espionage and the type of environment that you’re infiltrating, instead of some “insert generic higher ranking vampire trope” as a placeholder.

So, what is my actual ire with Damsel then? Well, if we’re really getting down to brass tacks, it’s just not that good. Not in an actual gameplay sense, for I didn’t encounter any bugs or unresponsive controls. Nor is it the fine tuned calibre of Mario, or any of Rare’s earlier outputs. It’s just a very bland game.

If you’re a coffin-dodger, like me, some of you might remember Newgrounds, the flash-based hosting site that had lots of rudimentary cartoons on there. That’s what Damsel plays like: a flash game. Everything has that flat look to it, which may sound harsh towards a cartoon-themed earlier, but given that I gave Comix Zone as an example earlier, it’s almost like this is going backwards. Considering Mark of the Ninja was a benchmark XBLA title a few years back (it’s also backwards compatible now, FYI), this feels like a step backwards. If I were to summarise, it’s just a very flat, uninspired looking game.

What really did twist my plums though, was how flow-breaking some of the gameplay elements are though. Now, despite not being a hostage negotiator for the police, I am given to understand that hostages dying is considered a bad thing. But in a game that encourages running and gunning, nothing ground my teeth more than failing a mission because a stray bullet hit Johnny Hostage-Face as I was on my way to free him. Granted, you might think to conserve your [unlimited] ammo and play cautiously, but that just slows down both your progress and high score attempts.

For whilst there are leaderboards to battle out around the world, a la Trials, unlike its biking contemporaries, there’s no drive here to want to keep replying levels until I have that twitch-like reflex to know when and when not to shoot. I get that that is the implied way to play, but with the constant threat of one stray bullet ending a run, or your sarcasm squad sitreps between missions, it stops the flow quicker than a dam in the Sahara.

So for me, Damsel gets a middling recommendation. If you’re looking for something you can file under “slightly difficult to get used to, eternity to master” then this would be in that rather specific category. As I said at the start, this won’t look out of place on the Switch or Steam library, as those two are bread and butter for this kind of game. Whereas on the supposed powerhouse that is the Xbox, it just seems like a waste of potential. Granted, this is only an indie title, so there isn’t going to be mass dollar behind it. It’s just that the end result on the Microsoft flagship is a bit of a damp squib.

But I guess, true to the vampiric nature, it did drain the life and joy out of me.

Damsel is out now on Xbox One (reviewed), Nintendo Switch and Steam.