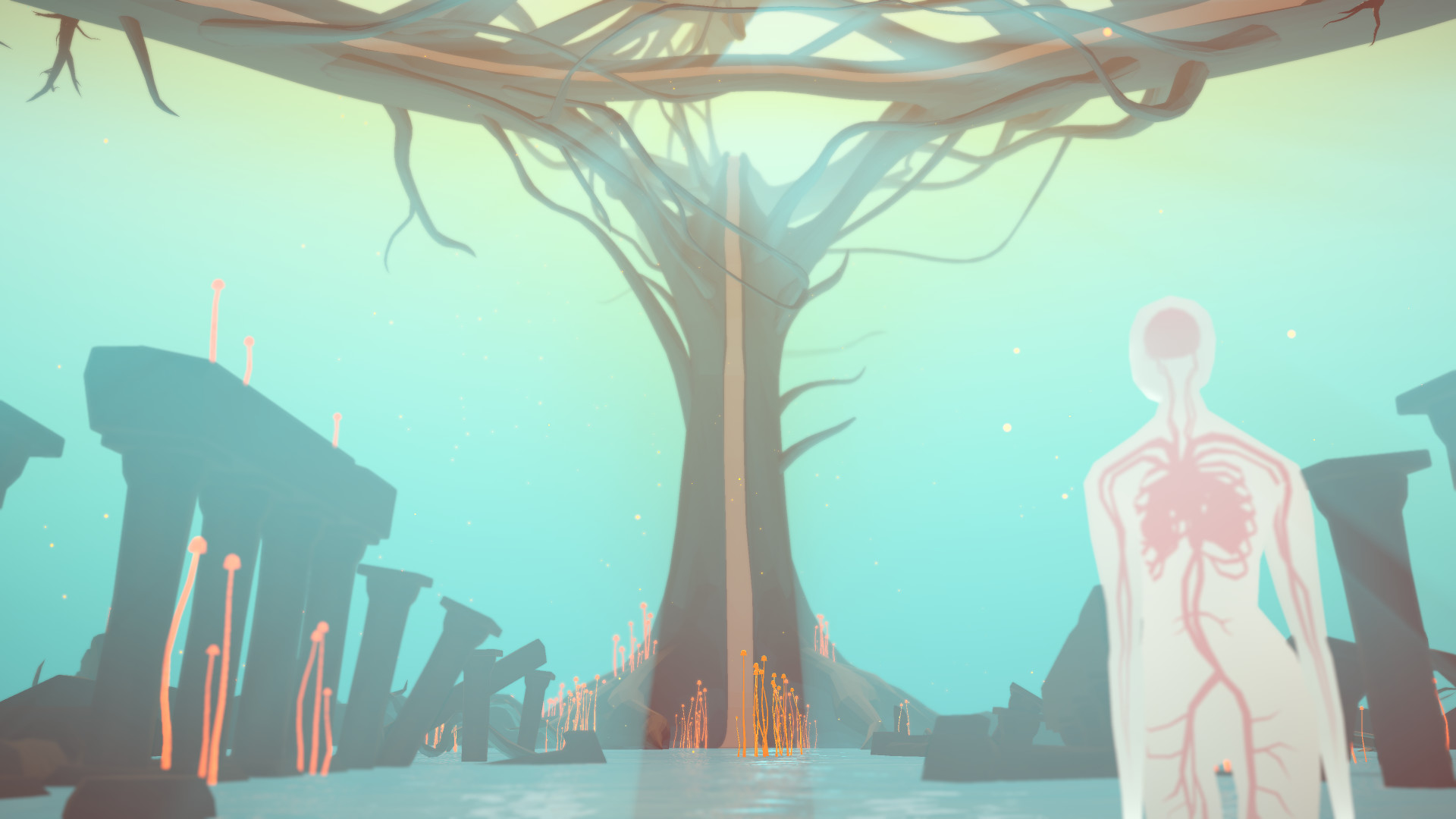 Etherborn bridges the gap between GRIS and Monument Valley to create something unique. The Finger Guns Review;

I was a big fan of GRIS upon launch (that much is quite evident here), and anything that’s due for release which is being compared to it was something I was going to play. I had played the opening segments of Altered Matter’s Etherborn at EGX Rezzed this year and whilst it was certainly a pleasant enough time, I felt that I couldn’t really get my teeth stuck into it due to the exhibition environments don’t lend particularly well to puzzle games. I was struggling to keep a focus on what I was meant to be doing, making the same mistakes over and over and knowing that behind me there was probably someone watching, waiting to get their go on the game and show me how it’s done. Turns out those behind me were the games developers, and I was making a mockery of their high-concept level design and easy-to-pick up mechanics.

Suffice to say I really wanted to play Etherborn away from a bunch of people disgraced with my lack of ability to perform whilst people are watching. It’s a regular occurrence, to be fair.

Etherborn begins as any good puzzler does, with an utterly baffling storyline which is meant to piece each level together. I did my best to keep up with it but the fact is it has zero effect on your gameplay and works only as a device to get you from one stage to the next. It very much stays away from the actual levels, rather choosing to play out in-between via cut scenes. Essentially humans were no fun and never realised their full potential so this is what happened. Your nameless character has just been born and a voice seemingly appearing from absolutely nowhere will talk you through your surroundings and what it was that brought you here, it’s up to you to reach the voice to understand why you’re where you are and why you exist at all. It’s all very deep but contextually means nothing. What you’re really here for is the puzzles and thankfully, they’re all rather terrific.

In typical gravity-puzzler fashion, Etherborn’s laws of physics bend to your will. If you see a ramp-like surface, you can walk up there and completely change your perspective in order to collect an orb which you need to move on through the puzzles. Think of them as keys to unlock sections. You need to collect as many as the empty platforms are requesting and as such, this leads you through mind-bending gravity, perpendicular to where you are. The levels are hugely creative and a wonder to explore. It’s a little too easy to fall into the infinite abyss and die horribly, though you immediately return back to where you were to try again seemingly with zero consequences.

Etherborn is not an easy game and requires exploration and a significant amount of trial and error. The levels will demand backtracking and knowing your way around the levels are important. There’s no single guide that keeps the levels from being too linear, you’ll find yourself walking up the wrong segments and taking incorrect paths a fair bit, but it’s all part of the challenge. You’ll see the orbs you need to collect off in the distance, very high above you or way below you, you just have to work out how on earth to get to them.

Visually Etherborn looks glorious, the scenery that surrounds you is bare bones but it would be unjust to not mention the complexities of the level designs on show, and how they feel organic, like that’s how they’re supposed to be. It’s a beautiful game to be sure, though it’s worth mentioning I’ve now played Etherborn on Xbox One (Rezzed) and Switch (review code) and the Switch version has almost certainly taken a knock. It feels great to play in handheld mode though, but it looks like it could quite easily run on an iPad and the Switch should be better than that.

Etherborn absolutely comes recommended if you’re after some challenging puzzles. It’s one heck of a headscratcher in places but feels hugely rewarding when you finally work it out. It’s not a particularly easy game to jump into and as mentioned above, trial and error is the order of the day and what Etherborn is all about. The game does not punish you for dying so just keep trying, you’ll eventually crack it and feel like you could take on anything. At least that’s how I felt. When I beat genre-buddy Back 2 Bed I felt like an absolute genius, when I beat Etherborn I felt like I was one evil laugh away from becoming a supervillain.

The narrative and visual issues aside, the ultimate draw of this game is the complex, wonderful level designs and the intricate puzzles and they mountain over any serious concern I had with the game. Keep your head down and you should be able to crack Etherborn in around 3-4 hours, which is more than enough of this kind of gravity-puzzler for me.

If you love your gravity puzzles, get it on your system. You were born to play this.

Etherborn is available now on Xbox One, Nintendo Switch (reviewed), PS4 and PC.

In order to complete this review, we received a promotional code from the publisher. For our full review policy please go here.