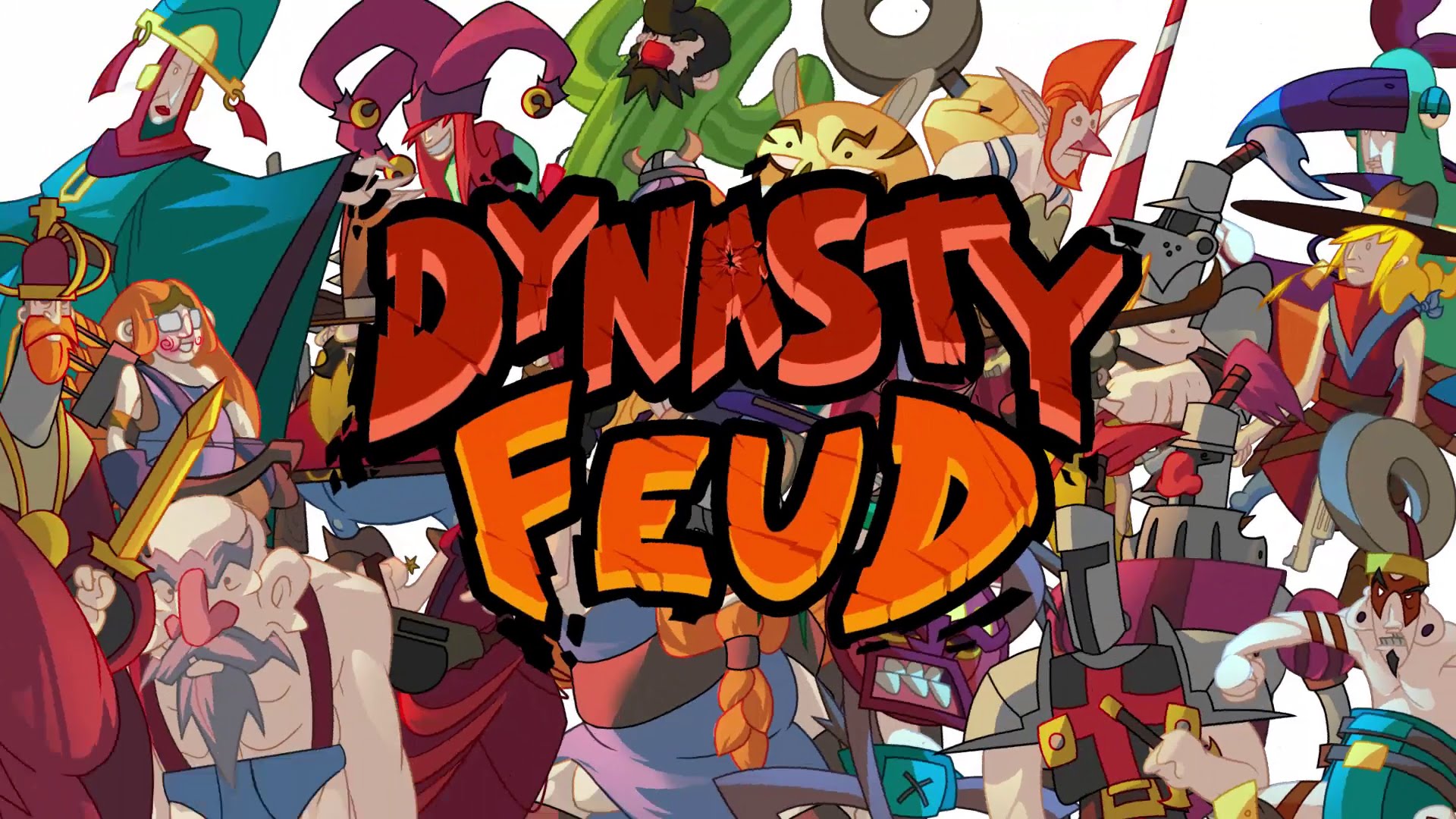 Dynasty Feud is a fun couch party game but the instability of the online play lets it down. The FingerGuns Review;

Dynasty Feud is a fun couch party game but the instability of the online play lets it down. The FingerGuns Review;

Dynasty Feud does things a little differently when compared to its peers. A 2D neo-king-of-the hill 2-4 player competitive platform brawler, this game pits the ancestors of 8 characters, their “Dynasties”, against one another. Each team comes with 5 generations of characters to play as and once they’re all dead, you’re out of the game. Almost all the characters in the game are defeated with a single hit and a match is won when only one player still has an ancestor in play.

The game has 40 characters in total and each one has their own characteristics, strengths and weaknesses. Some characters have devastating projectiles that can be fired across the map but must be picked back up before they can be fired again. Other characters have guns which are great in a pinch but once they’re out of bullets, must be reloaded. There are some characters that have nothing but slow melee attacks to use but these characters can sustain more than one attack (some of the Knight characters are reminiscent of Monty Python’s Black Knight, losing more and more of their body parts as they take damage). It’s an impressive array of characters and abilities that are fun to play around with but can take some time to master.

Matches are played on 8 arenas that have dynamic events to make things even more interesting. In the Castle arena, boulders are being fired from the foreground into the background which, when they land, destroy players and platforms alike. Similarly, in the Wild West Inspired level, trains run alongside one another and often overtake, meaning that if you’re on the wrong train, you could end up getting dragged off the level to your death. The Japanese level, a tower randomly sets on fire destroying the platforms over time. These levels are designed so that the longer a match goes on, the less cover there is to hide behind so as to force a face-to-face engagement and it’s a method that really works to keep matches tight and exciting.

There are a plethora of deliberate design choices in Dynasty Feud which have been made to make the game as fun as possible. When a Dynasty member dies, they become the disembodied ghost of their descendant who can float around the level and “annoy” other players for a few seconds while they respawn. The “annoy” skill is specific to the Dynasty you have chosen and can vary between blacking out the background on the entire screen to calling in lighting to knock players back. This means that even when you’re not in the action, you can still impact it. There are also special abilities that can be unleashed, again specific to each Dynasty. These single-use devastating attacks can only be unleashed once a 6 level bar has filled. This bar fills with 1 piece for each character you kill and with 2 pieces for each time you die. This is again a very shrewd design decision that means that even if you’re getting heavily beaten, you can change the tide of a match and keep it competitive. It’s plain to see while playing Dynasty Feud that a lot of thought and consideration has gone into making it exciting, fun to play and as combative as possible – at least when playing in a local game…

The online portion of Dynasty Feud does have some issues. It seems very unstable and while my internet connection remained consistent, I’ve experienced significant lag, glitching and visual stuttering during some evenings of play. It seems like it only needs one of the 4 players to have a poor connection to upset the game for all players and I’ve yet to play against a player who had a green connectivity status (with each person being labelled with a traffic light system). Private Matches are by far the most stable of the 3 online game modes with both the Quick Play and Ranked games stuttering quite regularly. That being said, the few matches I have had that haven’t suffered from lag and players dropping out after a few seconds have been very fun indeed.

Dynasty Feud is an ideal game to add to a party playlist among friends (who you wouldn’t mind becoming enemies). It’s a fast-paced, well designed, thrilling 2D platform brawler with a bold but basic art style and a catchy soundtrack in which anything can (and invariably will) happen. Matches can change in an instant because of the changeable nature of the characters, environments and abilities which lean into the unpredictable but can be mastered with practice. It’s a shame that the online modes seem so unstable, even with a stable internet connection, but Dynasty Feud seems like a game best played together on the same TV (but always just out of arm’s reach) anyway.

Disclaimer: In order to complete this review, we recieved a review copy from the publishers. For more information, please see our review policy.