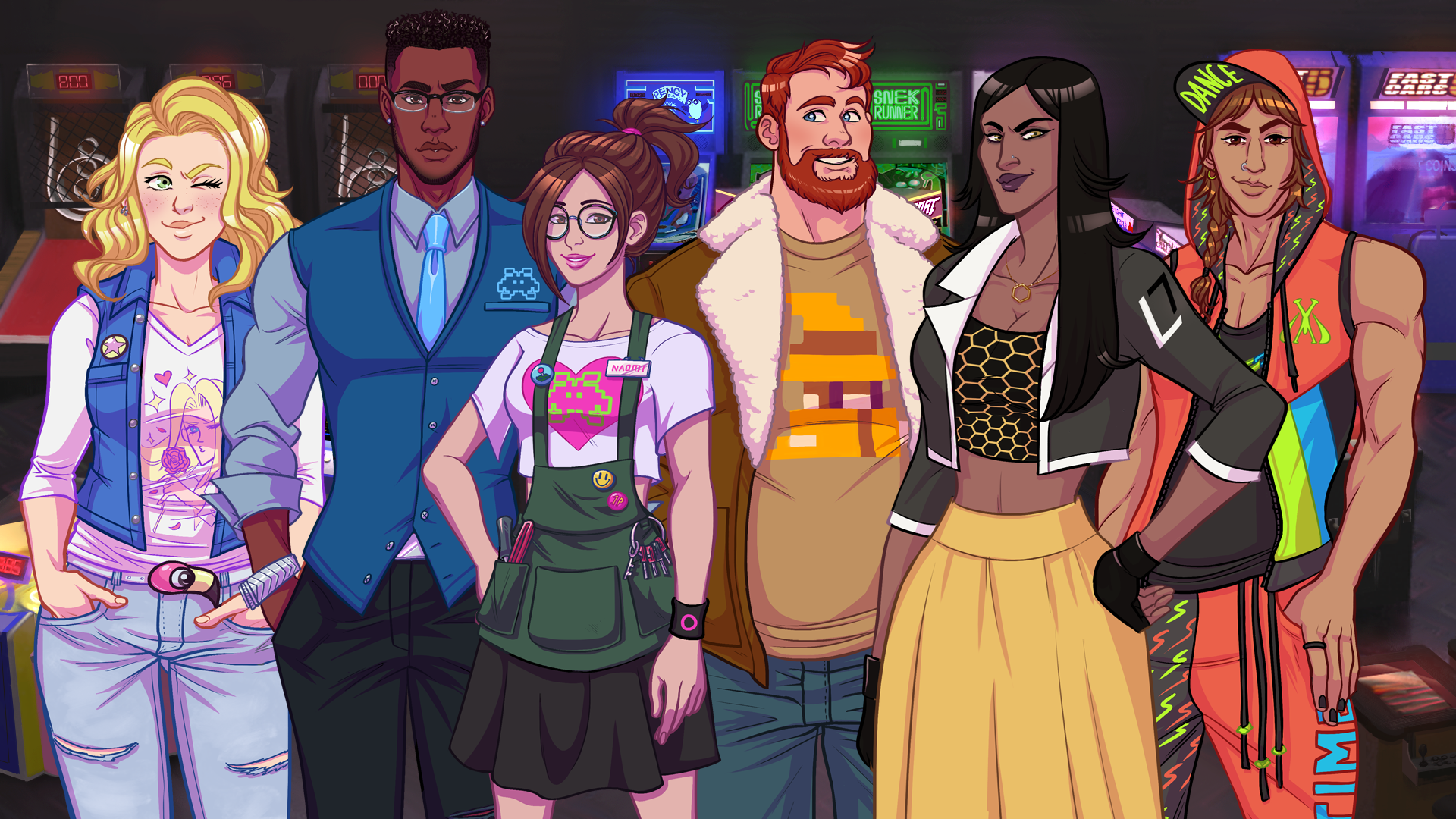 With an inclusive, diverse cast, Arcade Spirits is a fun romance visual novel with plenty of pop culture heart. The Finger Guns Review;

There’s plenty of visual novels out on the PS4 these days. From the time-bending antics of Steins;Gate Elite to the murder-y choices of Danganronpa, the courtroom drama of Phoenix Wright right through to the peaceful drives of Wheels of Aurelia, it’s a genre that has done well on PlayStation’s console. Until the past 12 months though, there were very few romance visual novels on the platform. There were even fewer made by a Western developer, but now that number is thankfully growing. Arcade Spirits, from developers Fiction Factory Games and publishers PQube, is the latest arrival on the PS4 and it’s a little different from those that have come before it.

Arcade Spirits is set in an alternate timeline in which a particular Atari game didn’t get buried in the Nevada desert because of its poor quality in 198X, inadvertently causing the US games market to implode. The primary difference between the in-game world and our own seems to be that Arcade’s and the coin-op market are still big business. It’s the year 20XX and the main character, Ari Cader (see what they did there?), has just been made redundant from the latest in a long string of unfulfilling jobs. Ari’s life isn’t going anywhere. No close family. No career. A single friend – the fun and accepting Juniper – who’s also their roommate and is currently spotting all the bills. In a last ditch effort to get their life on track, Ari turns to an organisational app called Iris which turns out to be a lot more than just Indeed or Tinder. Iris, working a long way outside its programming boundaries, directs Ari to a job they’ll likely love – a Floor Attendant at Francine’s Arcade Funplex. Here, Ari meets a diverse cast of colourful characters who’re all on their own journey of soul-seeking or self realisation. Each of their fates become entwined with that of the Arcade which is about to go through 8 chapters of trials and tribulations.

The plot itself is quite dramatic at times while having plenty of touching moments sprinkled in. There’s dreams achieved and subsequently dashed, a nefarious competitor looming, a weekend at the beach, hospital trips, a visit to an arcade auction which uncovers a real world urban legend – plenty of interesting events happen in Arcade Spirits and the space between these events feels well filled.

The vast majority of the cast Ari meets can eventually become romantic interests if you wish (being asexual is an option here, locking romantic options out). The visual look and initial interaction with a lot of these characters make them look a little too stereotypical – Theo, a wealthy high score chaser, looks like he’s walked in out of Dream Daddy. Naomi, a cute, overall wearing arcade cab enthusiast is adorably shy – because of course she is. Queen Bee, confident eSports team member and streamer, always seems seconds away from having her very own “heated gaming moment”. There’s bleeped out language each time you interact with her. Ashley comes across as an Otaku cosplayer who’s more interested in the costumes than the games… You get the idea. As you spend time with each character though, it becomes clear that each of these characters is much more than meets the eye. Each character has a decent arc which will unveil itself as you progress and as they get closer to Ari.

What’s more, the cast of Arcade Spirits are each symbolic for an element of the gaming community. Percy represents solo score chasers. Queen Bee is the competitive multiplayer gaming and eSports. Ashley is the cosplay scene. Naomi has love for everything retro and is obsessed with preservation. Teo is all about what some call “casual” games and community. It’s an interesting inspiration that’s somewhat reflected in each character’s arc too.

As for Ari, you can shape this character how you want both physically and otherwise. The character can be cast as a Male, female or Not Stated/They/Mx at the beginning of the game. Visually, you can change their clothes, hair and skin tone. Personally, I chose They/Mx on my first play through. The game adapts incredibly well to allow this representation and I barely even noticed a change in pronouns. Each main character’s sexual orientation matters not – Ari can romance them all (or not, if you choose).

While Ari has a strong personality that’s presented throughout the game regardless of what you pick, you get to choose a lot of what he/she/they say. Each of your choices are linked to a character trait – Gutsy, Kidly, Quirky, Steady or Balanced – which eventually have far reaching consequences. Your decisions are tracked by your digital assistant Iris which keeps track of your data. Your most popular typed choices will affect your romance options, your ability to make certain decisions and the final chapter in a big way.

Pop culture plays a major part of Arcade Spirits too. There’s references to plenty of arcade classics like Pacman and Pengo but there’s nods to movies and wider culture too. The gay couple that run the artisan coffee and book shop (The Hole Story) near to the arcade are called Ben and Matt. I swear they channel a little of Ben Affleck and Matt Damon in their appearance.

The vast majority of Arcade Spirits is played out like many other visual novels with a static background and conversations presented along the bottom of the screen. Unlike so many others on the PS4 though, it’s in first person. You don’t get to see Ari very often. There’s no side by side conversations. Instead you’re looking at characters you’re talking too head-on. Like the best visual novels, this game encourages replayability so you can explore its narrative branches to its fullest. To respect your time, you can fast forward through scenes you’ve seen before, pausing only to allow you to make decisions.

Some text chats are joined by soundbites and the more poignant moments in the story are fully voiced by a vocal cast that have done a really great job with the script to make it feel believable.

The mixing feels like a bit of an issue here though. Some characters sound much louder than others and when anyone speaks, the music (a collection of chip tune and synth wave tunes which are tip top) simply stops. It’s not a deal breaker but the audio just feels off at times.

It’s not the only issue with Arcade Spirits though. If you spend a lot of time with one character, you can end up repeating entire conversations. During my first run through, I spent a lot of time with Naomi and a lengthy conversation between her and Ari played both during a lunch time at the Arcade as well as at MAX (the game’s version of PAX).

Then there’s the rare typo and error in the text. I’m not one to get all bent out of shape over a typo – I could always tell what was meant to have been said in these situations – but there’s the occasional formatting text included too. I spent far too long trying to understand why this following image was like it was before I realised the formatting html is a mistake…

The small hitches and spotty audio don’t spoil what is an otherwise thoroughly enjoyable narrative. The diverse cast of characters, showing more inclusivity than any other romance visual novel on the PS4, is certainly welcome. Arcade Spirit is tightly written, with only a hand full of lulls, but plenty of heart and a tonne of quirk. While it’s not going to be challenging the greats in the visual novel genre, It’ll surely raise a smile or 10 on your face.