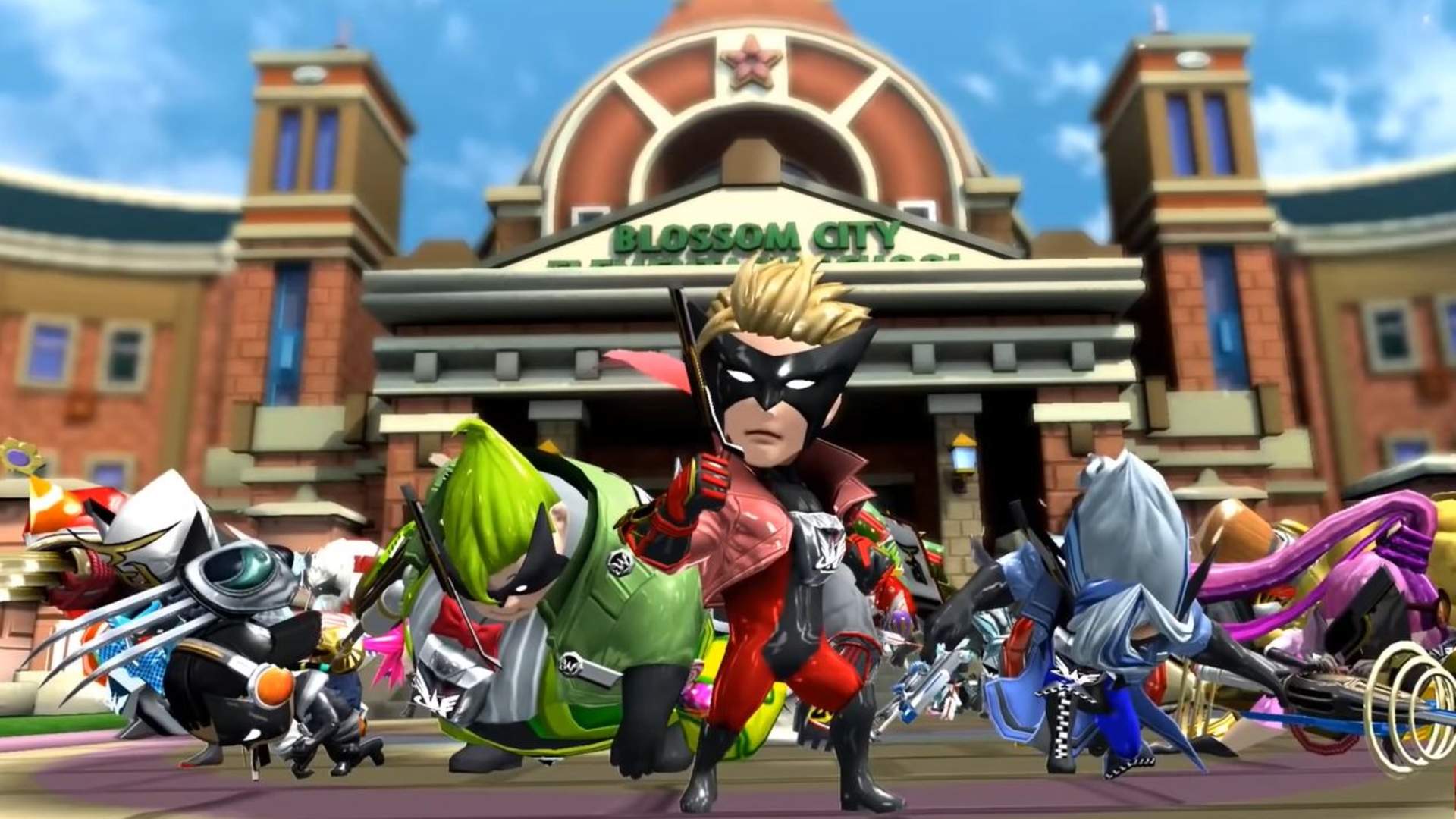 To newcomers without any nostalgic connection, The Wonderful 101 Remaster might feel like an unwanted relic from the past with some truly atrocious UI that makes the game frustrating to play. The Finger Guns Review.

It was during one of the initial cut scenes, as Wonder-Blue impatiently hangs in the air, motioning for things to begin again during a freeze frame, the The Wonderful 101 Remastered narrator delivering far too much exposition in one dose, that I first felt it. This wasn’t going to be a game for me. I’d not played the original Wii U version of the game but I’d heard nothing but good things. I backed the Kickstarter to see what all the fuss was about. I’m still wondering.

A number of games designed for the Wii U have made the jump to other consoles and done a good job of it. LEGO City Undercover, despite having sections that were originally designed around the second screen, managed the leap to PS4 and Xbox One seamlessly. The same can be said about ZombiU and New Super Mario Bros U. This isn’t something that The Wonderful 101 Remastered has achieved. This is a game that has truly struggled to divorce itself from its Wii U roots to such an extent that it’s quite frustrating to play on PS4.

If, like me, you’d not played The Wonderful 101 the first time around, the premise is simple. 100 costumed superheroes called the Wonderful Ones protect the Earth. The game begins as an alien force, the Geathjerk Federation, starts to invade the planet which triggers a call for the 100 heroes to convene. The 101st? That’s the player. When together in numbers, this group can use their powers to create powerful constructs, like a Green Lantern who’s pretty useless when they’re on their own. These constructs can take the form of primary weapons for combat – a fist or a sword for example – as well as ways to traverse the environment. During the game, you control your chosen leader but you’re always accompanied by an entourage of other heroes or deputized civilians.

An absurd action game, you guide your 100 Power Ranger-esque heroes (or as many as you’ve recruited) around each level like a herd, punching and slashing giant robots in the face. Your team can dodge and parry as one but if your team take a hit, they’ll become dazed. Lose enough of the Wonderful One’s this way and your ability to create weapons evaporates.

The unique aspect of this game is the ability to use your teammates to activate or overcome things. Boxes need giant hands to open. Crates need to be struck with a giant sword. Sections of the environment can be altered by surrounding them with Wonderful One’s. Your team can turn into ladders and bridges to traverse some levels. During time limited sections, you’re challenged to draw shapes with a conga line of your followers. On the PS4, you have to use the right stick or the Dualshock 4 touchpad to direct your crew. This never feels comfortable. Either too twitchy or too stiff, like a shopping trolley wheel with a mind of its own, moving your entourage into the shape you want them too is always a battle.

The original game reportedly made ingenious use of the Wii U controller. Acting as a second screen when played on a TV, it displayed important menus and allowed you to change your leader (which also changes your weapon type), check your radar and use consumables. This remastered version plays much more like the Wii U version when played entirely on the controller which played with picture in picture. A tap on the touch screen button will bring the menu up which, in this version, can be moved around the screen. As pleasing as it is to be able to move the menu around so it’s not blocking any action, it’s always blocking the action. Even when you make it semi-translucent, it’s at best distracting and at worst, blocking your vision entirely.

None of this is helped by a fixed camera angle that zooms and pans of its own volition and rarely feels like it’s in the most appropriate place. In some areas, enemies will spawn and the camera will track outward to show their arrival then stay there. When you’re controlling a horde of 90 odd characters and 20 aliens arrive, and all of this is crammed into the bottom right corner of the screen, you just can’t keep track of what’s going on. In other sections, the camera zooms in so closely that you can’t tell which direction is the way forward. The only way to uncover your next destination is walking around the perimeter until you stumble across it.

I’ve seen the footage and there’s no doubt that The Wonderful 101 Remastered looks better than the original version. It’s shiny where it’s supposed to be, sharper and a bit of a looker at times (when the camera wants you to see the scenery). The fire effects still look like they’re from a 7 year old game however, as do the water effects which are very poor.

There’s game design elements of The Wonderful 101 Remaster that really betray the improved visuals too. There’s plenty of invisible walls throughout the game, penning you in to it’s linear levels, something the game’s industry has moved away from in the past 5 years. Finding secrets often involves jumping up the side of buildings and if the game doesn’t just magically stop you from landing on them, there’s likely something to take a look at.

One of the weirdest inclusions in the Remaster is the load screen practice area. On the Wii U version of the game, you got to have a little play around with the combat while the game loads the next mission. On the PS4, the load times are vastly reduced but this practice area still exists. By the time the practice area fades from black, you’ve got about 5 seconds before the next level begins which doesn’t give you any time to actually practice. There’s no way to just stay in this area and get some practice in and once the game loads, you’re moved along.

It’s not all bad though. When the camera is behaving and you’ve not fighting behind a menu, the combat in this game is quite cool. Having it linked to your crowd makes for an unique flow to fights, meaning that if you get hit hard and your team get dazed, you’re likely not going to get a chance to attack for a few seconds. This becomes a scramble for survival as you collect your dizzy comrades from where they landed. Instead, 101 Remastered asks the player to block and dodge continually but doing so with a limit. Each action combining your team (so blocking a dodging) consumes a little energy from a Unite Battery. If that battery runs dry, you become quite helpless.

The character to Wonderful 101 Remastered will make or break your time with this game. An odd combination of straight faced seriousness and slap stick and teenage humour, it’s a game that grated on me. It spent too long explaining every unnecessary molecular detail of the lore upfront while trying to make it feel less dry by adding some cheap laughs. For me, it failed drastically to do either aspect right. This being the case, I’m probably far less likely to forgive any of its other perceived sins. With no nostalgia to prop this up, it just falls flat.

There’s a 4 player mode included in the Remaster which adds uniquely coloured teams for each new player. This mode compound’s the busy-ness on screen but weirdly, the camera angle always feels better. In this mode, teamwork is essential as your groups are smaller.

I’m sure those who loved The Wonderful 101 the first time around will get a kick out of playing this game again on modern day consoles with nicer visuals. For those that hadn’t experienced it before though, this remaster feels like an artifact from a bygone age that couldn’t adapt to a new set of input’s without the Wii U controller. The combat and concept are still sound 7 years on. Everything else needed to be reworked or tweaked further.

The Wonderful 101 Remastered is launching on the PS4 (review version), PC and Nintendo Switch on 19th May, 2020 in North America, 22nd of May in Europe and 11th of June in Japan.

Disclaimer: In order to complete this review, we were provided with a promotional code from the publisher as part of a Kickstarter reward. For our full review policy, please go here.