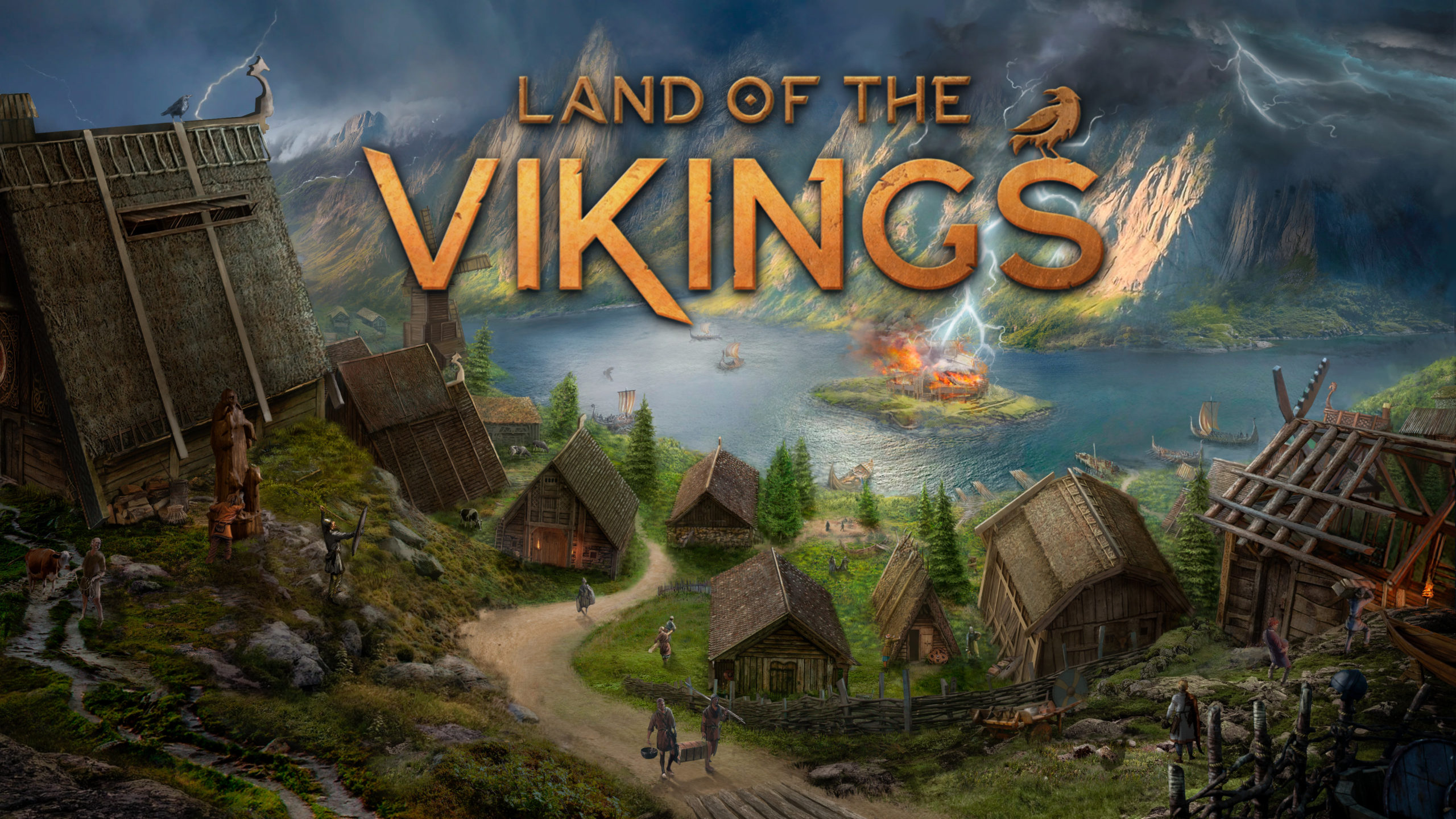 Some wonky AI and UI mean Land of the Vikings has some work to do in Early Access. The Finger Guns Preview.

The lands of the north are harsh and often cold, and as the Jarl of the settlement it’s up to you to create a place where your people can eke out an existence in this harsh land. Your people: the infamous Vikings, and even they will need your support as Jarl to survive in these lands…

Land of the Vikings [Steam Link] is a city building game by Laps Games/Iceberg Interactive, that is being released into early access today. As the leader of a settlement you’ll husband the growth and wellbeing of the settlements and its population as you grow from a meagre village to a mighty city, whilst managing the needs of your population and what industries to focus on. Should you focus on making sure that your population is well clothed and fed, to the detriment of having resources to trade? Should you make sure you have enough warm houses in time for winter, or make sure the food stockpile is large enough to keep you satiated for the coldest of seasons? In general, opportunity cost is important as it’s often a struggle to get enough of every resource, and your decisions will be key to decide on how to tackle the various problems you will face.

To begin with, in Land of the Vikings you’ll have but a handful of materials and buildings to work with, with a small amount of population to gather more resources with. Wood will need to be harvested from trees, and stone from rock formations. Some of the more basic materials can be mostly built entirely from these materials, but most will need more refined resources such as dressed stone and timber which are processed in stonecutters and carpenters respectively. These buildings will need to be staffed by villagers in order to make the goods, and this micromanagement is a large part of the game – there is no point staffing fields in winter with farmers, for example, when they could be put to more use elsewhere, gathering more materials as a basic labourer or instead working in another profession in the meantime.

Adding to the micromanagement is the case that your pops have various stats which can affect how good they are in particular roles. Luck, Intelligence, Strength and Speed are tracked on all pops, and for example a person with high strength would be a good fit as a miller or carpenter, whereas those with luck would be great at maintaining your flock of poultry.

Another material you’ll need plenty of in Land of the Vikings is the basic currency of silver – this can be gathered via sales via the marketplace to your own population, or via trade with other settlements and their trade ships slightly later into the game. Silver is used to pay for buying resources from other settlements, building roads (increase walking speed of your pops), fields, decorations (which can give small buffs such as happiness or storage space to various buildings), and buildings. Silver is very useful, especially, later in the game for trade reasons.

The final basic resource is meals, which are a way to track how much food your settlement currently possesses. Food can be gathered through a few means – fishing boats, gathering huts, hunting, and farming – but no matter which way you intend to gather it, at all times it’s important to have a stockpile of it before your population starves and their happiness drops considerably. This is especially true in winter.

A full year of seasons is simulated in the game, starting with spring and heading all the way to winter. Making sure you have enough materials to get you through the winter is incredibly important – mostly this consists of needing plenty of food (as farming and gathering is disabled) and firewood to keep your populace from freezing. Other than winter however, the other seasons don’t feel particularly distinct from each other and some more variety in events in mechanics to make them stand out from each other would be welcome.

In Land of the Vikings, population happiness is another mechanic you’ll need to keep an eye on – make sure that your people are sheltered, fed and clothed and kept warm in winter and there won’t be any problems, but if these needs aren’t fulfilled then you will run into problems with bad events, population decline and maybe even the ousting of you from the settlement…

Don’t Let The Fame Get To You

Next up is fame – fame is a way to track how large and famous your settlement is, and it can be increased by a large amount of people present in your village, via random events and their consequences when they occur, and by completing various small objectives you’ll be given over the course of a game. These can take the form of starting up certain production chains or completing certain tasks. Fame is important as for every chunk of it you gain, you will receive points to spend on the tree of life.

The Tree of Life in Land of the Vikings is the main mechanic you’ll use to progress your settlement, and essentially acts as a tech tree. Using it, you’ll be able to unlock new buildings and production chains, new mechanics such as trade and combat, and improve various facets of jobs such as increasing job yields or just outright improving the happiness of your settlement. Advancing along the tree is incredibly important and the main way of tracking progress in the game.

Unfortunately, Land of the Vikings does have a few problems. First up is the UI – it’s not the most engaging and isn’t particularly great looking either. It’s basic and its functionality at times isn’t up to par. Important resources such as firewood, which is extremely important in the dangerous winter months, aren’t tracked unless you go to the building which produce the good. Tooltips will pop up and you need to click them quite a few times to make them disappear. If there are issues with buildings, red hazard signs will flag above them, but later in the game these can show up pretty much everywhere as the AI can be a bit dumb about dealing with its needs.

The graphics are the next point of call. They’re certainly serviceable and they’re not the worst I’ve seen, but I wouldn’t say they particularly standout either and overall. I feel the art style just feels a bit… generic?

The AI is one of the worse things to deal with – the larger the settlement, the worse it feels, as pops sometimes wander about aimlessly and take an extremely long time to complete the tasks they’ve been given. Gathering materials can take a long time and the general pacing of the game is extremely slow, but this is reinforced by the pops being awkward (and often not addressing their hunger or fatigue issues, reducing their happiness) and dragging the pace along further. The problem with this slow pace is that the only real thing you can often do is reassign pops to other jobs, and there need to be more things for the player to do and mechanics to interact with to pass the time whilst you wait.

In addition, the micromanagement when you get to a medium sized settlement and above does become a bit tedious to deal with. There aren’t any ways to automate it, and as your pops die, they need to be replaced. The problem is, unless every pop dies in the building, then you must manually go and check the buildings one by one and see where people are needed. The larger the settlement gets, the worse this problem becomes. There is a job list you can use to go and fill positions without going to the buildings, but this lacks the nuance of seeing the persons stats you are assigned to the position.

Next up is events – these generally occur randomly but can occasionally be triggered by your actions, and some of the ones present are pretty fun – I’ve had an earthquake wreck half of my settlement, and yields increase for farming. There aren’t enough of them though, and you’ll just generally get the same events repeatedly. More variety is really needed to make the most of this mechanic.

This seems to a be a repeated trend for the game, unfortunately. There is a lot of promise here and long term, I think Land of the Vikings could be an excellent city builder on par or better than its rivals, but it needs a lot of work to be able to do this. Both more content and improvements to the existing content are required, but these problems aren’t insurmountable and I hope that the developers are able to reach the potential for the game long term.

Overall, then, Land of the Vikings definitely lives up to the label of ‘early access’. Some of the elements there are fun, and I love the idea of the game and the time from history its set in, and some of the core elements could be a great basis for the game to build off of. Unfortunately though, it feels unfinished and needs a lot more content and tweaks before it can be a game I’d heavily recommend.

Land of the Vikings is launching into Early Access on PC via Steam on November 8th, 2022.

Disclaimer: In order to complete this Early Access Preview, we were provided with a promotional code from the publisher. For our full review policy, please go here.