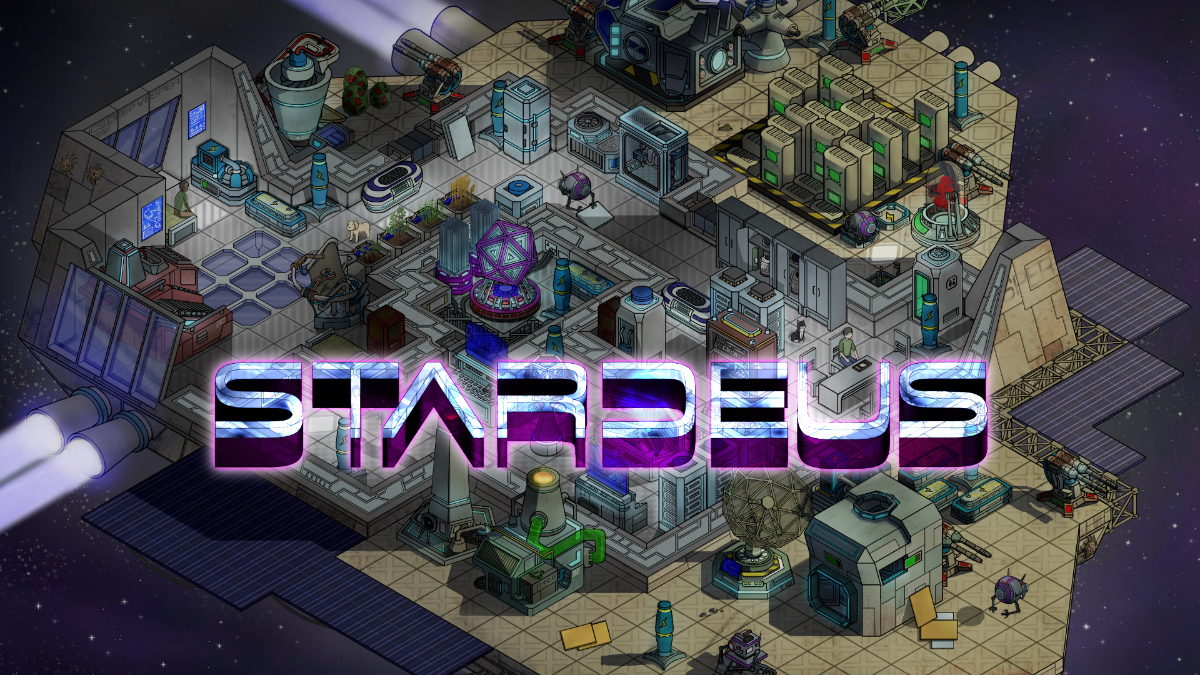 Stardeus is a fun colony management game where you're rebuilding a destroyed spaceship. The Finger Guns Early Access Preview.

You wake. Klaxons are blaring, debris litters the area and it looks like your ship has broken apart. The others are still safe in stasis, but you’re very much in danger. In desperation, you scan the area for a spacesuit to wear. Unfortunately, it seems they mostly disappeared and there is only one left… Welcome to Stardeus.

Stardeus is an Early Access colony simulator set in space, and will draw the most obvious comparisons to the ever popular Rimworld, due to a similar art style and top down view. Eventually you will travel the stars, but to begin with you need to rebuild your broken apart starship. As the advanced AI in charge of making sure you colonists are safe and cared for, you will oversee the welfare, research, economy, and rebuilding efforts of your starship and colonists, as well as taking charge of combat later in the game, and then finally terraforming a planet so that it is inhabitable by human life.

Gameplay in Stardeus initially consists of establishing some power production and starting your initial research. Once this is done, you’ll need to start dealing with some bigger problems, such as winching together the various parts of your ship, as well as re-establishing life support systems for the stasis array your various human pops are located in. To begin with though, you’ll be relying on automated drones as opposed to humans, and they will be the primary vessel you use for initial gameplay; they’ll be useful for construction, repair and so on. Automated drones can be manually controlled to a degree, but in general they’ll be going around automatically doing their thing. You’ll assign priorities to any tasks you want completed, and using this they will complete tasks in order.

Once you’ve winched together parts of your ship, you then need to go about ensuring the integrity of the various rooms you’ll have. This means repairing any damage, making sure there are bulkheads built so the vastness of space isn’t something your humans will accidentally take a trip into, and finally powering airlocks and doors to try and keep the oxygen and heat in. Once this is done, you’ll need to research oxygen and heating to make sure that your pops have a safe atmosphere within the ship, so they can go anywhere other than the tiny safe room they start off with. After this, its up to the player… should better engines be researched? Maybe better hydroponics should be researched for a better food supply? Or maybe you should just focus on improving the structure of the spaceship and expanding its size.

Once you’ve got engines and a bridge, you’ll be able to travel to planets, albeit slowly at first. This will be important, as you will need materials to craft replacement parts and expand upon your initial infrastructure. Water will be required for your pops. All of this must either be traded or mined, and generally, the latter is better; why pay for something you can just get yourself? Once you have these materials, via crafting benches you can process them into more complex parts and resources with which you’ll build more advanced equipment. Not all items in the game can be crafted by robots – some need a more human touch – and this is a great way to incentivise gameplay that prefers using a mix of pops, instead of just robots. Once you have a bigger ship under your belt and plenty of equipment whirring away, Stardeus is an extremely fun game, but it can take some time to get there.

In Stardeus, there are other people you’ll encounter in the game via traders and random events, and not all of them are friendly. You will need to make sure that you have some weapons to hand, either by trade or crafting. Some of the random events are fairly tame, such as dust coating the ship, but others are a bit more severe such as micro meteorites impacting your ship. Keeping your staff ready to deal with any surprises as they occur is important. Your own humans can’t, until later in the game, be directly controlled and at times they can be a bit of a liability.

The control system you use in Stardeus is a radial menu that can be used via right clicking (which takes a little to get used to), or by a bar at the bottom of the screen which you left click. The radial menu, once a person gets used to it, is excellent and very quick to use and I was pretty impressed by how efficient it could be to use.

The music and ambient sounds in the game are your general sci-fi sounding effects – they’re generally good, but nothing too special and I often turned the music off instead. The feedback sounds when using the radial menu mentioned above, however, are pretty good.

Unfortunately, during my time with Stardeus, I did run into a few issues – especially with the human pops. I saw humans literally go into a room across from where all my food was, stand there for a long time, and starve themselves to death. I’ve seen robots refuse to complete tasks which they have the resources and required skills for. I’ve also seen humans just walk into dangerous areas despite there being no reason to and dying due the extreme cold. There are a few bugs to work out, but being an early access title I’ve no doubt these will be dealt with over time.

Finally, the UI could be a bit awkward for a new player to work around at times – it wasn’t obvious where many of the things I needed to were when controlling pops, for example. There can be so much going on in menus that it can all get a bit overwhelming, but once you’re used to it the system fits its purpose fine.

At its core, Stardeus is a fun colony management game where you get to rebuild a spaceship to your own specifications, and manage the population to achieve this end. I’m particularly impressed with the radial control scheme, which I feel is better than its contemporaries. The core gameplay loop is fun, but there are a couple of issues such as bugs and pathing that need looking at. Regardless though, it’s a thumbs up from me.

Stardeus is launching into Early Access on PC via Steam and GOG on October 12th, 2022.

Disclaimer: In order to complete this Early Access Preview, we were provided with a promotional code from the publisher. For our full review policy, please go here.