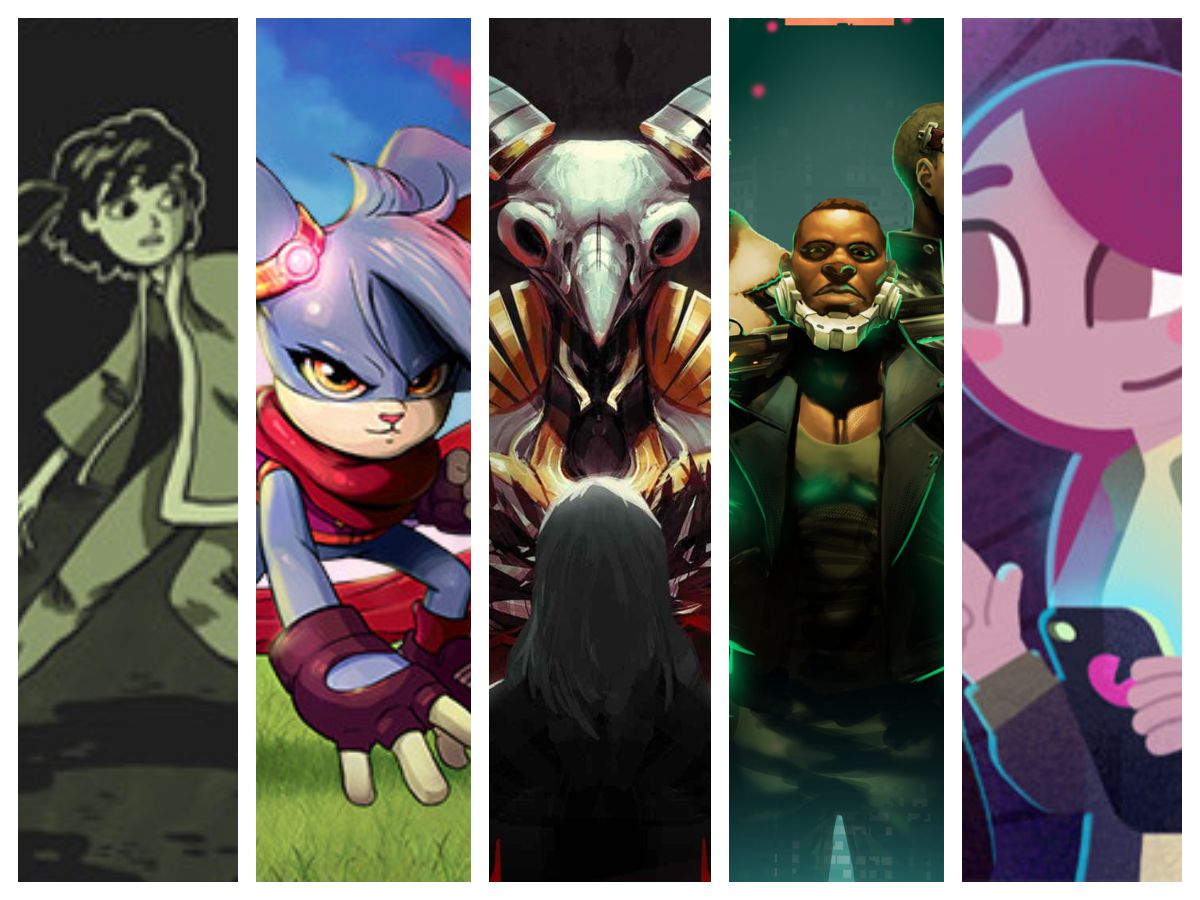 It's the Steam Autumn Festival and we have scoured the Indies on offer to bring you Five Finger Guns Favourites!

I don’t know about you, but it always seems to be one Steam Festival or another this year, with the claim of hundreds of indie games at every one! But its true. This weekend is the turn of the Autumn Steam Festival, full of demos, developer’s livestreams and more indies than you can shake a finger at. Here at Finger Guns we are all about spotlighting hot indie goodness, so as per usual I’ve had a play of a few demos and I’ve got five hot picks for you to stick on your Steam wishlist. Wishlisting really helps developers launch their games in the best way possible.

Land of Screens is a 2D story-rich adventure about everyday life. Combining soft Steven Universe mixed with South Park felt visuals, with a story heaped with social commentary and slice of life reality, Land of Screens follows Holland as she navigates the aftermath of a breakup, without the anxiety-inducing caress of her phone and social media. Everyone else has their phone and everyone knows about the breakup, but all Holland wants is to go cold turkey on online.

Even in the short time the demo lasts, Land of Screens shows massive writing skill and promise, deftly making me think about our over-reliance on social media, and the beauty of physical objects rather than digital, because you can give them to others. So sweet. Most of the story is built around the influence of screens, and how it stops people from really connecting. Somewhat hypocritical for a game that must be played on a screen, but hey, I’ll forgive when it’s this delightful. If you liked Night in the Woods, or visual novels, this should be on your screen right now.

Land of Screens is slated to grace your screen of choice in 2021 and you can check out the charming demo on Steam now. It’s lovely.

Set in a cyber abbey beset by a series of murders, Lucifer Within Us stars a digital exorcist who has been brought in to find the culprit. What’s really interesting here is that the case is broken down into timelines for each character’s testimony that you can manipulate and watch back and forth.

The demo on Steam gives you one case to try, and has you catching each of the two suspects in the little lies they think they can get away with. You contradict one, by using the other’s version of events, and see what they’ll admit to. When you’re ready and you have the means, opportunity and motive down, you can accuse one of them and solve the case.

It’s a complex, but really user-friendly system that encourages experimenting and getting really heavily involved in the case. Check out the demo now, because Lucifer Within Us is actually out on the 15th next week on Steam. And don’t forget to check back here, we will have a full review.

Kaze And The Wild Masks

A wonderful 90s style platformer, Kaze and the Wild Masks has just dropped a brand new 2.0 demo on the Steam Autumn Festival, and it’s well worth a look. Beautiful Sonic-inspired levels, with Crash Bandicoot spinning and gliding like Tails, and the whole thing is as smooth as butter.

You play as Kaze, a very nimble energetic rabbit, who’s ears are like extra arms that she can glide and climb ropes with. Kaze must travel the platforming obstacle-courses of the Crystal Islands to save her friend Hogo from a curse that has brought vegetables to life. Jump, spin, glide, and use the guardian masks to swim and fly, in a pixel art knife into your nostalgia parts.

The demo is available now, and we expect a release date to come soon. Kaze is one of Stadia’s first Google Stadia Makers games, and will also be out on Steam, PS4, Xbox One and Switch probably early 2021.

Disjunction is a cyberpunk stealth action RPG game, that plays like the early Metal Gear games if they were made now. Quick satisfying stealth gameplay with cones of vision for guards and enemy drones, and you can use one of three playable characters to make your way through the game’s many locales.

Corporate espionage and cyber enhancements gone wrong, the story feels like Deus Ex remade in pixels. At least in the demo you can also play the game completely non-lethal, or go in gun’s blazing. However the claim is that the story is reactive to the way you play and your decisions in some events, probably resulting in multiple different endings.

You can check out the demo on Steam now, and Disjunction is also coming to PS4, Xbox One and Switch.

This one’s a bit different and brand new to me. Hiro’s escape is a stealth action game based in 1467 Samurai Japan, but it’s also four colour Game Boy style and feels like it could have been made at the absolute height of 16bit.

Hiro’s family has been scattered by the Onin War in feudal Japan, and he must find his way back to them through a war-torn countryside. You must sneak past Yamana Samurai guards, bash them, roll into bushes, or bait them into their allies’ arrows and sword slashes. It also feels like an old samurai film in places.

What’s amazing, apart from the smooth and easy to pick up gameplay, is that the main game promises a 10-hour campaign with more than 100 levels, and an emotional story to go with it. Its bitesize stealth gameplay would really feel at home on the Nintendo Switch, but for now Hiro’s Escape is coming to PC (via Steam and Itch.io) and Mac early 2021.

Best of the Rest

Games we’ve covered before but you owe it to yourself to check out the demos for and wishlist!

Back 4 Blood: Tunnels of Terror Review (PS5) - The Rogue-like Descent
Jackbox Party Pack 8 Review (PS4) - Jack of All Games
Summer in Mara Review – There and back again. Again and again.