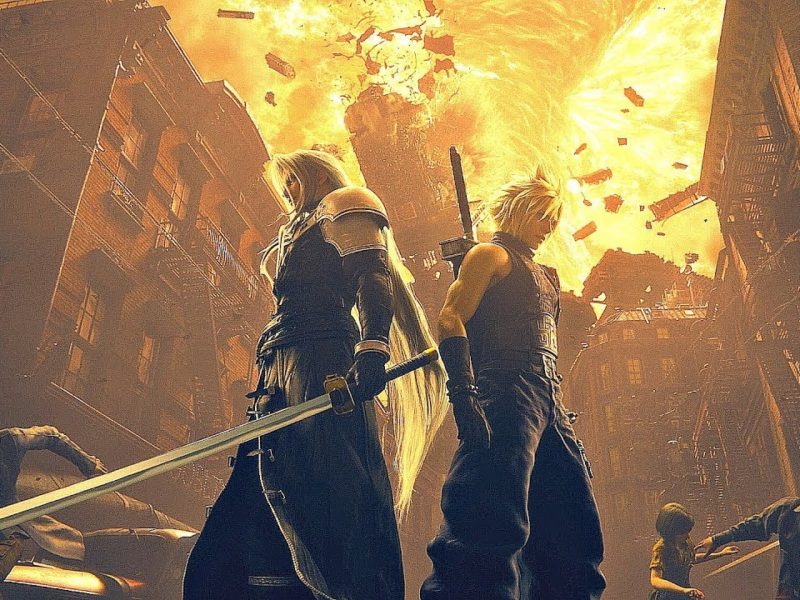 A few Whispers about the Arbiters of Fate –

SPOILER WARNING: THIS CONTAINS FINAL FANTASY VII REMAKE SPOILERS. OBVIOUSLY. DON’T MOAN AT US IF YOU SCROLL DOWN ANY FURTHER.

It’s been a few weeks now and most players have finished Final Fantasy VII Remake Episode One, or whatever we’re calling it. FF7R1. You’ve been up the Shinra Tower, you’ve raced away from the city, and you’ve probably gone back a little into Chapter Select. And this means you’ve seen everything that happened with the Arbiters of Fate. You remember, the most in-your-face addition to FF7’s story, those Dementor-like wraiths that swirl about getting in the way at the most annoying moments, or saving Barret’s life (you liked them then), or stopping you from killing Sephiroth. They are meant to be some kind of Guardian of Destiny, but what does that mean? And working out who’s side they’re on is pretty hard to tell throughout the game. They both hinder and help at different moments. So do they want to help the planet or not? Are they helping Sephiroth or you?

Well, in order to understand the Arbiters of Fate, instead of fixating on whether they are on our side or not, we need to take a little trip through the fourth wall.

So, first, what is the Fourth Wall? It’s not yet another secret arm of the government intelligence service – that’s Fifth Pillar. The Fourth Wall is a concept in media. Think of a TV show – a sitcom like Friends maybe – there are three walls on screen surrounding Chandler and co, but the fourth wall is us. The Central Perk set just opens out into a bunch of cameramen and a laughter-primed audience. This extends to any TV show, any movie, and any game. We are looking in through the screen on a world that doesn’t know we are there watching them. Ross and Rachel don’t know they are fictional.

So, what’s breaking it? The Fourth Wall is broken when someone or something in the world of the show or movie, acknowledges the fiction of their world, or that the audience is there. Think of Fleabag looking to camera and commenting on her thoughts, or House of Cards, when Underwood addresses the camera directly. It happens in games too; remember when Psycho Mantis requires you to use a Player 2 controller thereby acknowledging the fiction of his world. It’s often played for laughs too, like when Daxter or Clank hit the camera and remind you its there.

The Arbiters of Fate however, break the fourth wall in epic style.

Let me explain. In the original game you were experiencing the story and doing everything for the first time, discovering Sephiroth, the plight of the Planet, leaving Midgar, all of it. You didn’t know what was ahead for you and your new friends.

But in the Remake, most of us know what’s coming. For some it’s an overall knowledge from media and culture for the last twenty years, for many it’s the knowledge of playing the game through once in ’97, and for a few of us, it’s something we have known and breathed and lived through multiple times. We know every location and part of this adventure through and through. We know what eventually transpires in the Land of the Ancients, we know about the Weapons, we know about Sephiroth’s plans with Meteor and even the post-credits scenes with Red XIII and a transformed Eden-like world.

Breaking the Fourth Wall then, the Arbiters represent that knowledge that the audience have. We know what destiny has in store for our heroes in a way we never did before. And in a way that has likely never really been attempted with any intellectual property ever before. There haven’t been that many remakes of this scale ever attempted.

So what does it mean when the Arbiters stop something happening? Are they helping or hindering? Let’s unpack it for a moment.

In Chapter 12, the Arbiters repeatedly stop you getting to the pillar that supports the plate, and when you finally get there, you fail to stop Reno and Rude from dropping the plate on Sector Seven. Why do they stop you? Are they simply stopping you from getting killed? No, I don’t buy it. This game is ambitious in every respect, so let’s think bigger. What about if they are breaking the Fourth Wall?

We always knew Sector Seven was going to get crushed. Hell, if I had been given the freedom to do so, I would have parked up on the pillar ready for the Turks and stopped them, saving thousands of lives, and changing the course of the story. The Arbiters of Fate are there to stop you, and any characters in the story from changing things, because the plate has to fall, and Sector Seven’s loss has to happen, and even with the foreknowledge that it would happen, you cannot stop it.

It’s even worse when they help you. At the top of Shinra tower, you expected to find President Shinra dead with a sword in his back. Instead, you find him hanging from his helipad. Barret helps him, and it then looks like President Shinra is going to survive, thereby changing the narrative. But Sephiroth appears and does what he was always meant to. What he had to. Phew, timeline intact. But then he gets greedy, and kills Barret too. The audience are aghast. We know this can’t happen. Goddammit, Barret is integral to the rest of the story, we shout, shaking our fists at the screen. They can’t possibly change it that much! But in comes one of the Arbiters and heals Barret while you fight Jenova. The Arbiters of Fate save Barret literally because its not his time to die. We know that he couldn’t die, he’s got a big part still to play.

The Arbiters of Fate are there to both help and hinder whenever your foreknowledge of the story’s events would possibly cause you to make a different choice. Think of the Arbiters as preservers of the timeline. Whenever things get out of whack, they swoop in to correct things. It’s a device that allows the developers to change things, but also constrains them to stick to the original story, at least enough that the major beats still have to happen.

That’s all well and good until the final showdown. What about the fight with the god-sized Arbiter, the Harbinger? You fight and destroy him at the very end of the game, but what does that mean? That we killed fate? Well, yes, close enough. But remember the Fourth Wall. The Arbiters represent our knowledge of the original timeline. Killing the Harbinger is really a metaphor, symbolically freeing the developers from completely following that timeline. Aerith speaks about not wanting to adhere too closely to fate. She wants to fight, to find another way. By defeating the Arbiters in this way, we are now made complicit in destroying the very guardians keeping our beloved original timeline intact. Heady stuff. It’s about as meta as it’s possible to get.

Consider also, does the Harbinger not look like something else integral to the further story of Final Fantasy 7? I swear it’s not just me; he looks like a Weapon. The Weapons were five or so enormous organic-mech-like creatures that protected the planet. They were its defence mechanism, and appear in the second half of the original, one of them trying to destroy Midgar completely.

So could the Harbinger be a type of Weapon? A planetary defence mechanism, but one with the foreknowledge of fate? One that breaks the Fourth Wall. It knows what we know. It wants to preserve the timeline that we all know so well, because it knows that that timeline ultimately results in the protection of the planet.

In a similar way to the new Star Trek movies deviating from the Kirk narrative, the Final Fantasy 7 Remake series is setting itself up to go a different way from the source material.

To some of us, that’s worrying. We wanted a straight one-for-one recreation of the original story. But for others that kind of freedom is really kind of exciting. Anything and everything could be different this time around. Consider also, with the Arbiters defeated, will they even be in the next game? Is there any Fourth Wall breaking constraint on Square Enix at all now, fictional or otherwise? Aerith might not die, Cloud could save her in time. We might find the Promised Land. We might not visit the famous locations of the original. We might actually understand how Zack Fair and Cloud’s lives really intersect.

What we may have to accept with this new series of remakes is that the entire thing is likely a continuation of the Advent Children, Crisis Core, Dirge of Cerberus properties, where Sephiroth knows he failed in the original game, and goes back in time (via the lifestream?) to change the timeline. It’s may well be the direction the new Square Enix want to take the franchise. Think franchise. Think big. Final Fantasy 7 is their biggest and best IP. As we’ve already explored the ideas in the game are ambitious to say the least, and don’t forget, Crisis Core etc were already an attempt to make a meta-series franchise with Compilation of FF7 and that was ten years ago. The writers have had another ten years to concoct more before it was finally green-lit.

So is it all change from here on out? I don’t think so. For some things I think we are safe. Don’t allow the scare-stories on YouTube to worry you. We already know the Ancients, and the Promised Land are intact. We know Nibelheim and Shinra’s experiments are the same, we have seen the flashbacks of Tifa in the reactor there, so we can be relatively confident these things will still happen. References in the Jukebox music and people’s overheard conversations lead me to think Cosmo Canyon, Wutai, the Shinobi, the Lifestream, and Gold Saucer are all intact, albeit they may appear in new ways.

What I don’t want are alternate timelines within the fictional context of the games themselves. I want them to draw the line at Sephiroth or Aerith going back in time to solve things. I feel that was where the last series, Final Fantasy 13, part 2 and Lightning Returns, really fell apart. Too many dimensions and timelines and different versions of people. Its Kingdom Hearts territory and those games are notorious for being insane head-scratchers. I don’t want that for Final Fantasy 7. What I am happy to accept however, unlike many fans of the original, is a new timeline ala Star Trek reboot. I don’t mind if new things happen, all the ones in this remake were great. I just don’t want anyone within the confines of the fictional world itself to know about the timeline change. Just us the audience. Oh and the Arbiters of Fate. Coz, like, they are the epic Fourth Wall breakers. If they make it into Episode 2 after their epic defeat, they are there hopefully to keep things as true as possible.

If you agree with my theory, or if you want to argue with it, sound off in the comments. It’s all just an interpretation for now. We will have to wait and see what Square Enix has up their collective sleeves.

Oh, and don’t expect an article like this explaining Zack Fair, because I’ve never been able to make heads or tails of that &#$£! pizza.