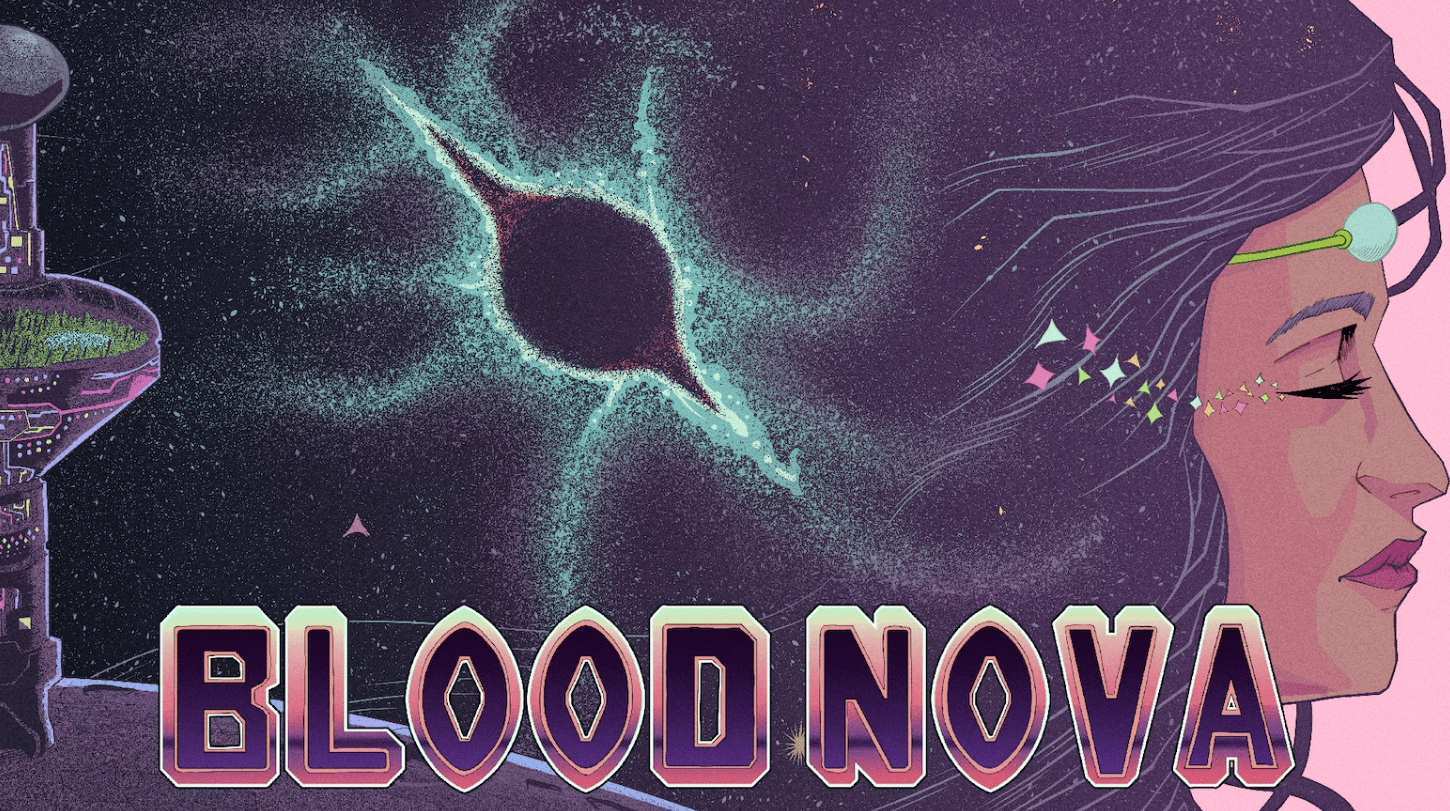 A point and click adventure set in a world that blends fantasy and sci-fi, Blood Nova is a gorgeous game. The Finger Guns Review.

If there’s one thing that first person point-and-click adventure game Blood Nova [Steam Link] does as good as just about any other game in the genre, it’d be world building. I can count on my fingers the number of times I clicked on something and I wasn’t served a little snippet of lore or exposition alongside a description of the object. The developers of this game, Cosmic Void, were very obviously attempting to paint their own world here with its own laws and mythos. They do so admirably with thousands of little brush strokes that envelope you in the cultures of Blood Nova’s universe and quirks.

Before you’ve even started clicking on things, you can tell Blood Nova is a little different. That’s because the game makes use of an unusual colour palette that’s part retro infused, part abstract high art. By using purples and greens as the primary colours, you get the immediate impression that this game takes place in a galaxy far, far away, bathed in light that’s definitely not coming from our own Sun. The use of these colours helps sell the retro-futuristic meets fantasy designs you’ll see throughout the game. It’s beautiful at times; the very first frame of the game has two women, yet unknown, sat on a gantry looking out into a scene that looks like a pixel art version of a picture sent back from Hubble. It sets the vibe immediately.

Kel Me A Story

You’ll come to know these two women very well during the 5-6 hour length of Blood Nova. The player character here is called Princess Love, the heir to the throne of the the powerful and prosperous Velayan Empire.

Love’s mother, Adele, is abdicating her position as empress after years of seemingly peaceful rule. This means that the reluctant Love is to give up her life of leisure and become empress herself, taking on all the responsibility that entails. It’s through Love’s eyes, in a first person view, do you view the world.

Alongside her best friend and protective Sentinel, a woman called Kel Yakkavan, Love had stopped off at a ‘lighthouse’, The Looping Veil, before she begrudgingly heads off to sit on her throne. These lighthouses act as beacons that guide space ships through a web of star channels that enable travel through the Velayan Empire.

When the lighthouse is attacked, killing almost everyone else on board, Love and Kel find themselves trapped with little chance of rescue. The pair must investigate why the facility was attacked and by whom in order to save themselves and maybe the entire empire.

Love In The Time Of Plythora-X

Blood Nova is story heavy for a point and click adventure. The tale is told almost exclusively through dialogue and exposition. None of the scenes you explore are animated and cut scenes are simply static images of characters with text presented along the bottom. Despite these limitations, the game manages to deliver a surprisingly tense if occasionally predictable story via some excellent writing, sound effects and brilliant tone setting music.

Broken up into 4 chapters, you’ll be moving through the lighthouse with a clear objective at all times. The objective almost always has a healthy connection to the narrative the game is trying to portray. Without spoiling it, the first objective you have is to retrieve something to help Kel. You’re told where it is and how to get there, but not how to retrieve it. That’s where the puzzles of Blood Nova come in.

Blood Nova uses a novel cursor and inventory system to accommodate that. Rather than a traditional ‘pick up/use/talk to/etc’ system, you simply have to click on a hotspot where the cursor transforms from an arrow into an elaborate symbol. That symbol will be red if you still have actions to perform on a spot, or blue once they’re exhausted. Click and you might just describe something, or alternatively you might interact or pick something up. The game intuits that bit for you, making it quite accessible. More traditionally, items from the inventory can be picked up and then applied to the scene in front of you or on other items in the inventory.

The knowledge barrier to the puzzles in Blood Nova is pretty low. Despite this game being set aboard a celestial lighthouse, many of the puzzles involve objects you’ll recognise from Earth. Scientists and doctors from the other side on the universe apparently use phials and centrifuges for their work too, for example, which is knowledge that’s used within a puzzle.

Where Blood Nova steps up its difficulty is when it blends the puzzle solutions into the specific lore and laws of this science-meets-fantasy land. In the game’s attempt to build the purpose of every hotspot item into this well rounded world, important information pertaining to potential puzzle solutions can become indistinguishable from the reams of text that are simply setting a scene. There were two occasions during Blood Nova when I stumbled across a solution using a bit of trial and error. I wouldn’t have otherwise guessed the solution had it not been for a bit of luck. These solutions were unique to the world of Blood Nova and are almost a test of how much you’d been paying attention rather than of your logic.

And honestly, sometimes it’s difficult to keep up with the pace that Blood Nova introduces something unique or peculiar. Context to all of the characters and events that are mentioned are eventually forthcoming but during some periods, it can feel perplexing. At times I felt like any number of those human movie protagonists that just found out aliens are real and they’re desperately trying to process it. The game expects you to just go with it, and while it does tidy up after itself by explaining most of the brow crinkling moments, it doesn’t help you process the story at the time.

The flip side to this is that Blood Nova uses that licence to shape a deeply charismatic world for itself. Mind reading aliens that have a snow globe for a head, trees that pilot space ships, metal eating grubs, spells born of the stars themselves, virtual fairgrounds, talking fish, galaxy spanning conspiracies – it’s all just par for the course here. This is the universe you’re in and you’re simply along for the ride.

The same scope extends to the characters. There’s a few paper thin characters that serve a purpose but the main cast are all multi-faceted and interesting. They each go through their individual arc during Blood Nova and come out changed. I’d have liked something a little deeper than a tweak on the hero’s journey personally but what is here is well executed.

As the credits rolled on Blood Nova, I couldn’t help but want more. That’s not a jab at the game’s length – the game tells its tale succinctly and competently during its 6 hour run time and doesn’t outstay its welcome. But rather, it feels like there’s more story to tell in the depth of universe that developers Cosmic Void have crafted. This game felt like a pilot, setting the scene for a much grander narrative. There’s questions left unanswered and narrative threads left loose to be tugged on later, hopefully in a sequel. Blood Nova is an enjoyable game in its own right, despite its tendency to get lost in itself. I just hope it’s the start of Love’s journey, rather than the entirety of it.

A cosmic point and click adventure, Blood Nova crafts an engrossing fantasy-meets-sci-fi world which will hopefully continue beyond this game. Its story is well told, complemented by pleasing art work and excellent music. Its only blemishes are a hand full of puzzles that feel dependent on the player’s comprehension of the game’s complex lore and a tendency to deliver necessary exposition after the fact, resulting in some confusing moments.

Blood Nova is available now on PC via Steam.