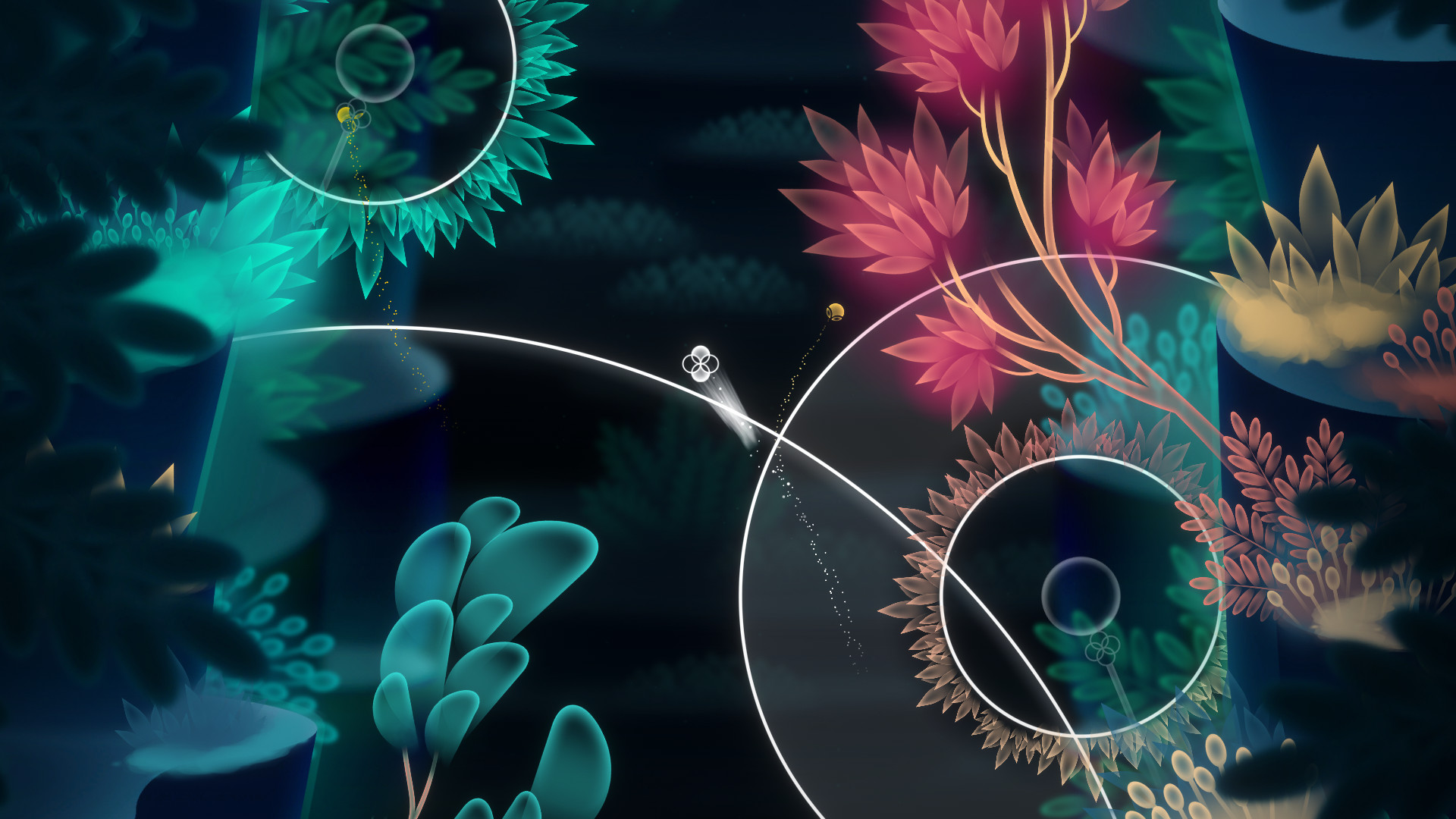 A unique platformer with an original traversal method, Onde is an enchanting experience. The Finger Guns Review.

A unique platformer with an original traversal method, Onde is an enchanting experience. The Finger Guns Review.

The first press release we received for Onde [Steam] contained the following sentence: “Words really can’t describe Onde, it’s one of those rare games that need to be played to truly resonate with you”. After completing this game, I can confirm that this is in fact true. This is one of those games that are difficult to pigeonhole or describe because it has so few aspects that are comparable with any other game. I can’t say “Onde is like X with elements of Y” because vast swathes of this game feel wholly original. The best description I can give this game is thus: Imagine Ecco The Dolphin had a love child with 2012’s audio-focused platformer Sound Shapes and it came out looking like a hybrid of thatgamecompany’s flOw and Gris. Yeah. It’s a wild mix and even that doesn’t quite do it justice.

I shall call him Squishy and he shall be mine

In Onde, you play as a small aquatic being. You have control over this tiny being and can move it along surfaces to which it sticks. This aquatic being, that looks like a squishy yet well-structured collection of cells, is slightly hamstrung in this underwater world however. That’s because it can’t actually propel itself through open water. It can only move along surfaces.

This is where the unique traversal method found in Onde comes in. Teaming with tiny jelly fish that automatically attempt to help the protagonist by scouting ahead to traversal points, the being triggers circular fields on which it can travel. The easiest way to describe it is like magnetic fields. By triggering these fields, an expanding (and eventually contracting) circle is generated which the squishy-being can stick too once it touches.

Onde introduces this traversal mechanic gradually, letting the player get accustomed to its particular intricacies incrementally. At first, you’ll simply be flowing from point to point slowly and methodically. Within an hour, you’ll have to trigger multiple circular waves, using different controller buttons for each wave, timing it as you do so to make sure you don’t end up stranded in a watery void. If you find yourself slowing down and stopping in the open ocean when not touching a surface, the squishy protagonist will split apart and reform on the last surface where it was safe.

As Deep As The Ocean

As you progress through Onde, it continues to use inventive and surprising ways to keep this core magnetic-like traversal fresh. Blue waves expand until they touch the squishy being at which point they stop expanding and become a circular platform to navigate. Later, circles implode when triggered, propelling the protagonist in the opposite direction. You’ll be using this to leap between trigger points as well as to avoid hazards. Black waves are dangerous and will destroy the player. There’s even sections of this game that feel reminiscent of a Sonic The Hedgehog level with circles that fire the squishy around tracks at blistering speed.

It’s quite miraculous how this game manages to communicate its aims and mechanics in a hands off way so that the increasing complexity of the puzzles don’t feel confusing. Certain structures quickly become synonymous with particular interactions, like circles on a pole become the standard for the magnetic circle wave origins. Little jellyfish like creatures float and chime to indicate the way forward without having to have it signposted in neon. There’s a lot of little touches that work to educate the player in subtle but intelligent ways.

This is mirrored in the narrative of Onde. There’s no narration in this game. There’s no cut scenes or typical plot delivery method. Instead, the story to this game is delivered via its visuals. Narrative bread crumbs are laid as you move through levels, foreshadowing more action packed sections which come to fruition later. It’s an abstruse story that’s open to interpretation by the player but still manages to invoke some strong feelings. It did for me, at least.

Jewel of the Seas

A lot of those feelings are generated by the the frankly beautiful visuals that Onde presents to the player. This game manages to combine clean geometric shapes with some bold, colourful and eye catching surroundings to create a truly gorgeous world to move through. The game also shifts through numerous themes, making it feel as though the universe in which this game is set is vast. The game starts in a plane, deep sea scape before moving to one inspired by jungles and nature, later joined by almost Non-Euclidean vistas.

Complementing the visuals and the game play is the quality music and sound effects. Every movement or shift through the game is accompanied by satisfying plinks, plonks and chimes which give them a more pleasing feel. The soundtrack to this game is fantastic and elevates the tone of each setting. When the game play is fast paced and filled with dangers, the music rises to build the threat and tension. When the scene is more puzzle-centric and methodical, the soundtrack quietly underpins it to give it a zen, relaxing vibe.

An occasional unbalanced focus on visuals over gameplay might be my only complaint about the design of Onde. At times, the camera will pan out to unveil massive, striking vistas of which we’d only seen small snippets of until then. A handful of times in the game, the camera pans out so far that squishy protagonist becomes tiny. So tiny in fact that it’s difficult to even see it among the details that have been revealed. During some of these scenes, you’ll still have to traverse along surfaces and this can be a touch frustrating when you can barely see where you are.

I came across two bugs while playing Onde too. In both, the game seemed to have registered that I’d progressed to a new stage of the scene when the auto-save was returning me to a previous state. The first time this happened, I spent 15 minutes trying to solve a relatively easy puzzle section which kept respawning me back to a prior point for no comprehensible reason. After quitting the game and restarting, I was transported to the end of the puzzle, solving the issue. The same glitch occurred later in the game but having experienced it earlier, I knew how to negate the issue. While this bug is not game breaking, it is frustrating. Hopefully a patch will be released to tidy up this issue.

Those small issues can’t dampen the unique, fresh experience that Onde provides through. This game manages to strike a delicate balance between being both exhilarating and relaxing at the same time. The music and visuals blend with the original mechanics to create something weird and wonderful that just draws you in and keeps you engaged from start to finish.

An original platforming experience, Onde combines a bold, fresh visual style, gratifying traversal mechanics and a fantastic soundtrack into a very satisfying game. A few rough edges are the only blemish on a unique game that’s worthy of your attention.