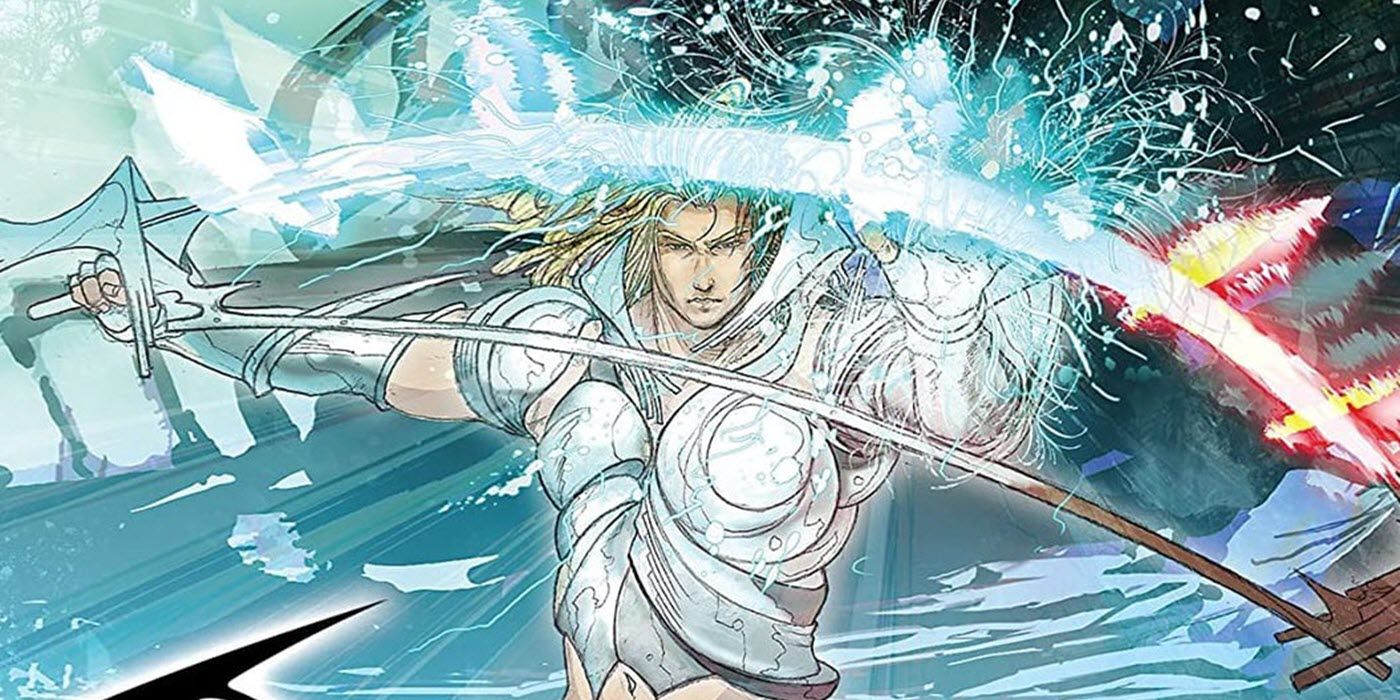 The ten year old holy hack and slash adventure finally gets ported to Steam. Does its artistic merit hold up today, or is it a relic to be left in the annals? The Finger Guns review:

When it comes to religion in gaming, either shoehorned or a literal interpretation, it’s never really bothered me. As an agnostic, I’ve become accustomed to both not being invested, nor instantly dismissing it out of pigheadedness. That El Shaddai is based around the Book of Enoch, a Jewish text, neither offends nor enthralls me.

That it is a colourful and bright action adventure, however, does pique my interest. I may not tout it much, but I love a good spectacle fighter. Devil May Cry, Enslaved, Metal Gear: Revengeance, that’s very much my bag. El Shaddai passed me by the first time round, on the grounds of “I couldn’t be arsed to part money for it”.

Skip forward ten years and now in that lofty position of “games review man”, the chance to play has finally come around. Who says patience and surprise are a bad thing? So let’s get biblical and find out how holy thou art, video game…

My grasp on religion is, at the best of times, anecdotal. Even more so when it comes to Jewish texts. Not being raised Christian, or anything else, I have never invested any more studying than what school forced us to back in the 90’s. All I really know of the Metatron is what the late Alan Rickman portrayed him as in an hilarious fashion.

El Shaddai, however, takes on a more serious approach than a Kevin Smith film. It follows the story of Enoch, a scribe sent on a mission to prevent a great flood from destroying the world of man. To do so, he must seek seven fallen angels and put an end to them. But he is not alone, thankfully. He has Lucifel, an anachronistic-clothing wearing aide, filling in exposition as players get to grips with the concept.

When you first hear the story concept, it’s hard not to think things like, “Isn’t this just taking creative liberties with Noah’s story from the bible?”. Don’t think too much about it, trust me. Instead, compare it to a No More Heroes or Soul Reaver game, with no religious subtext forced upon you. Players have seven targets, and will trek across some very vivid landscapes to get there.

When it comes to the whole “games as art” debate, there’s often a lot of pretention. Whether Shadow of the Colossus is art (it totally is) over, say, some absolute drivel like Deadly Premonition is always being contested, for some reason. Thankfully, there’s no argument when it comes to El Shaddai.

It is pretty. It is pleasing to look at, and it is definitely a work of art. Much like Furi, El Shaddai is populated with luscious views and vistas that would make an oil-and-canvas snob admit they can be wrong about things. Ethereal, dream-like scapes and stunning backdrops give way to a luscious, cel shaded style of character design.

It’s a bit creaky, given that it’s a ten year old port. There are some occasional clipping moments when a character’s hair will pass through them, that kind of thing. Graphical options are somewhat limited on PC, as well as it running on an older version of Direct 9. However, look past that and appreciate the watercolour-y goodness and take in what the game offers your eyeballs. Slight warning, however: it’s very, very bright at times.

What would you get if you made a game with the combat of Devil May Cry and Bayonetta, with the armour degradation mechanic of Ghouls ‘n’ Goblins? Well, probably sued by Capcom and Platinum, I’d imagine. Unless, cleverly enough, you dress it as a jazzed up reimagining of a Jewish scripture. Voila.

Exaggerated hypothetical aside, that alone should give readers an example of what to expect in this game. Fixed camera, 3D environments with hack and slash gameplay, with not so much a health system but one based on damage to your armour. There’s the standard array of charge attacks, launch moves, perfectly-timed parry counters and everything else you’d expect from a spectacle fighter. I played on Easy because I wanted to see the story through, but completing the game unlocks harder difficulties for the masochists.

It took me a while to get used to the fixed camera stylings of old. Having grown accustomed to right stick camera movement, going back to the fixed, arena-style combat of Devil May Cry rattled me at the start. Once players find that groove again, though, they’ll be stringing combos together with the best of them. Death isn’t quite as punishing here, granting you a reprieve if you’re quick enough via some button mashing. The challenge is there if you want it, yet still accessible enough to those that just want the story.

So the visuals are splendid on the eye, the combat is fast and frenetic, all that needs to be great is the dialogue and pacing, right? Well, when I made that No More Heroes comparison earlier, it wasn’t light. There was definitely some connotation in there.

Granted, this hasn’t been made by that madman, Suda51. But I wouldn’t be surprised if Sawaki Takeyasu had peaked over his shoulder for some development notes, if you catch my drift. If you’ve ever played Killer 7 or Deadly Premonition (Swery being equally “auteur” and weird), you’ll know what’s coming.

If you haven’t, allow me to summarise: the dialogue is flippin’ incomprehensible. Not in a Sims-like “All gibberish under a new language” pretense, but the pacing and narrative itself. Lucifel opens the game being as vague as the G Man from Half-Life. The beginning battle gets retconned so Enoch can change his armour, or something. The explanation of each of the fallen angels is riddled with hyperbole and mystique. At one point, Enoch rides a motorbike, which I don’t remember from Sunday school lessons being in any texts.

It’s one of those games, like the above and a few more, that relies on multiple playthroughs to start making sense. Which I suppose is why it ties in with unlockable difficulties upon completion. I can see why developers do it, to some extent. If a game dumped it all on players at the beginning, there’d be no curious drive to carry on. But as someone who played Killer Is Dead and still didn’t get the story, it can be grating. And if I’m honest, a little pretentious to assume we’re all of a similar level of investment.

A Port Worth Sailing Into

Fortunately, none of those grumbles above are a deal breaker. If you were to compare it to, say, Shadow of the Colossus in terms of longevity and ports/remakes then yes, it looks bad in comparison. Certainly if you were to compare to any game that’s had the porting treatment, then El Shaddai looks a bit lazy in that regard. It’s hardly been jazzed up from how I remember it looking on the Xbox 360 when it originally came out.

However, that depends on the bent of the individual. If you want to be a snob, then yeah, it looks a little rough. The over-saturated visuals and odd clipping issue that can’t be smoothed over with bright visuals will put you off a tad. Yet if that kind of thing doesn’t bother you, and you can accept that “old games look old” regardless of current platform, then this is fun.

It’s got satisfying combat, a decent enough interpretation of a fable and some pretty visuals to keep players entertained through its runtime. The first time you play it through, you’ll soon dismiss the lack of HUD and just bask in the weird beauty it offers. It’s only if players want to challenge themselves again that these game-like elements come back into play.

This is a short review, if you’ve noticed, for a relatively short game. There isn’t really much more you can extrapolate from a spectacle fighter review. If I broke down every aspect of combat, told you all the tips and tricks about the upgrade system, then this would become a walkful.

No, a game like El Shaddai needs to be entered with the minimum amount of background knowledge. Which seems like me doing half a job (don’t tell the others) but in this case, it works out for the best. To whet your whistle, I can tell you this: the action has cool slow-mo finishers, the bosses are mighty and varied, and despite being nutter-butters, the story had me grinning throughout. It’s absurd and it knows it, but when the director has worked on previously obscure games, what would one expect?

Look past the occasional jank of days past and there’s a very fun, very strange and very engaging brawler here. It may be drawn from religious sources, but there’s no forced bible-bashing here. No heavy metaphors or insinuations about burning hell for not worshiping some sky beard. Just a trip akin to any Suda51, Swery, Clover Studios or Platinum game that got overlooked ten years ago.

It has the occasional wrinkle of age, but don’t let that put you off. El Shaddai is a mad, colourful and beautiful adventure that, whilst not quite Devil May Cry levels of greatness, is still very entertaining. Don’t overthink it, go in and enjoy the pseudo-silliness of this over-the-top brawler.

El Shaddai: Ascension of the Metatron is available now on PC (via Steam), Xbox 360 and PS3.