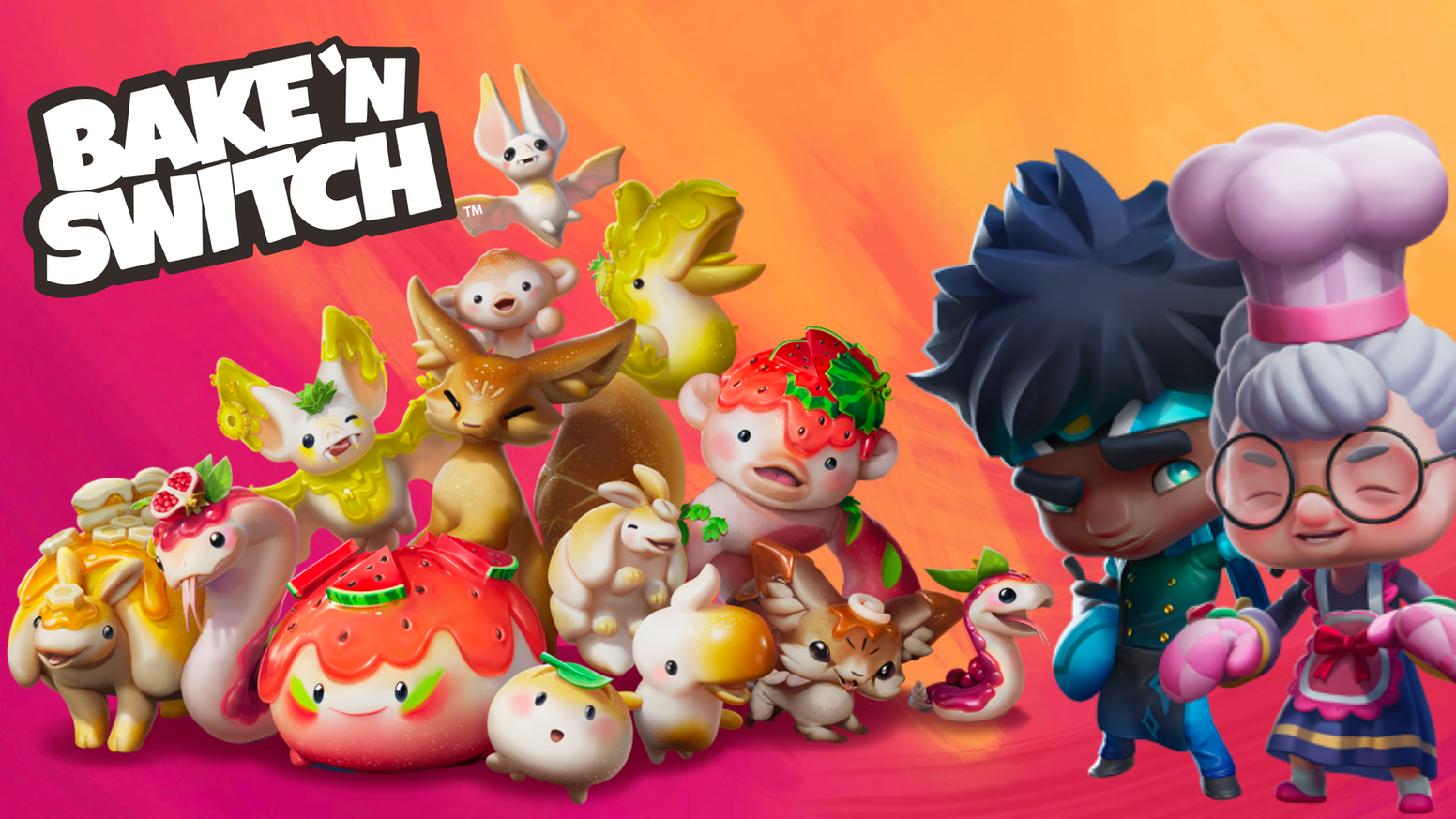 Overcooked!.. But with bread and more anger. The Finger Guns Review of Bake 'n Switch.

Overcooked!.. But with bread and more anger. The Finger Guns Review of Bake ‘n Switch.

Can you remember, once upon a time, that adorable Velcro food that you were able to just push together and make meals from? Maybe a slice of cheese on top of, smushed with a tomato. Bake ’n Switch is reminiscent of that. This time however it’s bread with adorable face shapes on them and a sense of anger when smushing them together.

I assumed this was going to be an easier, lighter version of Overcooked. I was very wrong. Bake ‘n Switch tries to be Overcooked’s sibling, but falls short due to game mechanics, bugs and the furiosity felt when being played.

The gameplay premise is simple. Pick up the dough, merge the dough, cook the dough! The bigger the dough, the more points you receive. Challenges include certain dough flavours where dough is thrown and glazed with the right ingredient, and thrown into a furnace. Throw the wrong recipe into the furnace and your oven will blow up and you will have to start again. Some pesky enemies such as mould or bugs that will steal your merged dough to try and slow your progress down. Oh, and there is a time limit to achieve a certain number of points to collect a minimum of 1 out of 3 stars. If you don’t achieve this you will have to redo the level. Tactics are key here.

With 100 levels, 2 worlds and 2 bosses, there is no denying that there is enough content. These levels and worlds can be done solo, online with friends, or offline with friends in couch co-op. You are able to choose from six playable characters that all have unique abilities. The soundtrack is simple and very catchy, and graphics and visuals are fine if you love cartoon charm.

This all seems great on paper but after putting many hours into it, it seems that the aspect you assume is going to be the fun bit, i.e. playing with friends, turns out is actually the part where the whole game lets itself down. Multiplayer is chaotic, clunky and just a bit of a mess. The mechanics and controls of the games are not as accurate as a player should have when throwing and aiming, especially when time is of the essence. There were times that dough would just pass through each other, instead of merging. This then led to needing to replay the level multiple times. The Aim system is off, which is vital in a game where the whole point of progressing is by throwing and aiming to your partner.

Sometimes with games, there’s an anger experienced that makes you want to play the level again out of determination. This was not that type of anger. This was an anger where it felt that I could not be bothered to progress through levels; if the reason I needed to restart were because of the mechanics itself. As soon as I hit one star, I didn’t want to make that effort to try and get further. Additionally, when completing the level and noting the high score for collecting 3 stars, it feels like 3 stars is an unnecessary goal, that attempts to be high for the sake of it, and not for any enjoyable gratification. At first I felt pretty bad cooking all these super adorable animal faces, but eventually I could not wait to launch them into the oven.

Around 25-ish levels in, It hard crashed on me and I lost all my progress. Cue the loss of all motivation to do 20 something levels all over again because of battling with the mechanics all over again. Imagine a game, where you copy Call of Duty’s gun system, but it makes you miss 70% of the shots. This is the frustration felt when playing with a partner. It isn’t that fun joyful experience of teamwork. There is PVP mode, if you fancy taking your anger out on your friend!

The levels are split into two different worlds made up of 50 levels a piece. You can choose from a tropical island, called Tropic Toaster or a sandy dessert named Serradurra. Progressing through the levels, depending on what environment you choose, will invite you to new dangers each time. The dough shapes are different in each world too, which is a nice touch. Serradurra appears to be for those more experienced players, as there is a quicksand element that will cover some of your surroundings from the first level, dawdle too much in these area’s and you will sink underneath and lose any dough you were merging together in your mits!

Each level does come with it’s unique lay out, with some innovative ideas on how players need to navigate and win the level such as whirlpools, and cinnamon wind to dust your dough, however 50 levels of the same environment can feel repetitive. You are up against many different obstacles such as obstructive walls, cliffsides, and rivers where dough is not allowed.

Diving further into the depths of the world and level progression, your greeted with more enemies that try and intervene and contaminate your dough, or slow you down as a player. You will have to punch your way out of the goop, or punch the mould out of your fresh dough. The nests of these enemies are easy to spot, so you can keep an eye on them when your busy baking. There is a dash ability that gets you around those larger maps easier as the characters are slow to move.

It is hard not to compare this game with Overcooked when the visuals, premise and goals are very similar. However, something that pleasantly surprised me was playing alone in the Bun Solo mode (Is this a play on words for Han solo? Not sure…). This is something that is difficult to do in Overcooked but is much more accommodating in Bake ‘n Switch. You still play the same levels as you would in co-op (unless you choose a different world) but everything seemed cleaner, less chaotic, more forgiving. The gameplay felt as if it had more control of the character and the environment, the mechanics felt smoother.

The unique abilities of each character is a great idea, but it did seem there were no noticeable ‘gamechanger’ differences. With storyline, some story dialogue goes on at the side of the map when you are choosing your level. However, with no vocals or real reason to pay attention to the dialogue itself, it is very easy to miss.

Bake ‘n Switch is very cute, it does feel more like a well executed mobile app as opposed to something that can be played at a party or with a group of friends. It reminds me of an okay time waster on a long journey. With other great switch games, this sadly does not compete with those such as Mario Party, or Jackbox for the party fun vibes.

Bake ‘n Switch is a multiplayer couch co-op which strangely works better as a solo journey. Adorable yet mighty, it can not be denied this game has a lot of content with 100 levels under its belt. However, this game comes with frustrating mechanics that let the party vibe elements feel lackluster. It does not hold up against the party favourites such as Overcooked or Jackbox.