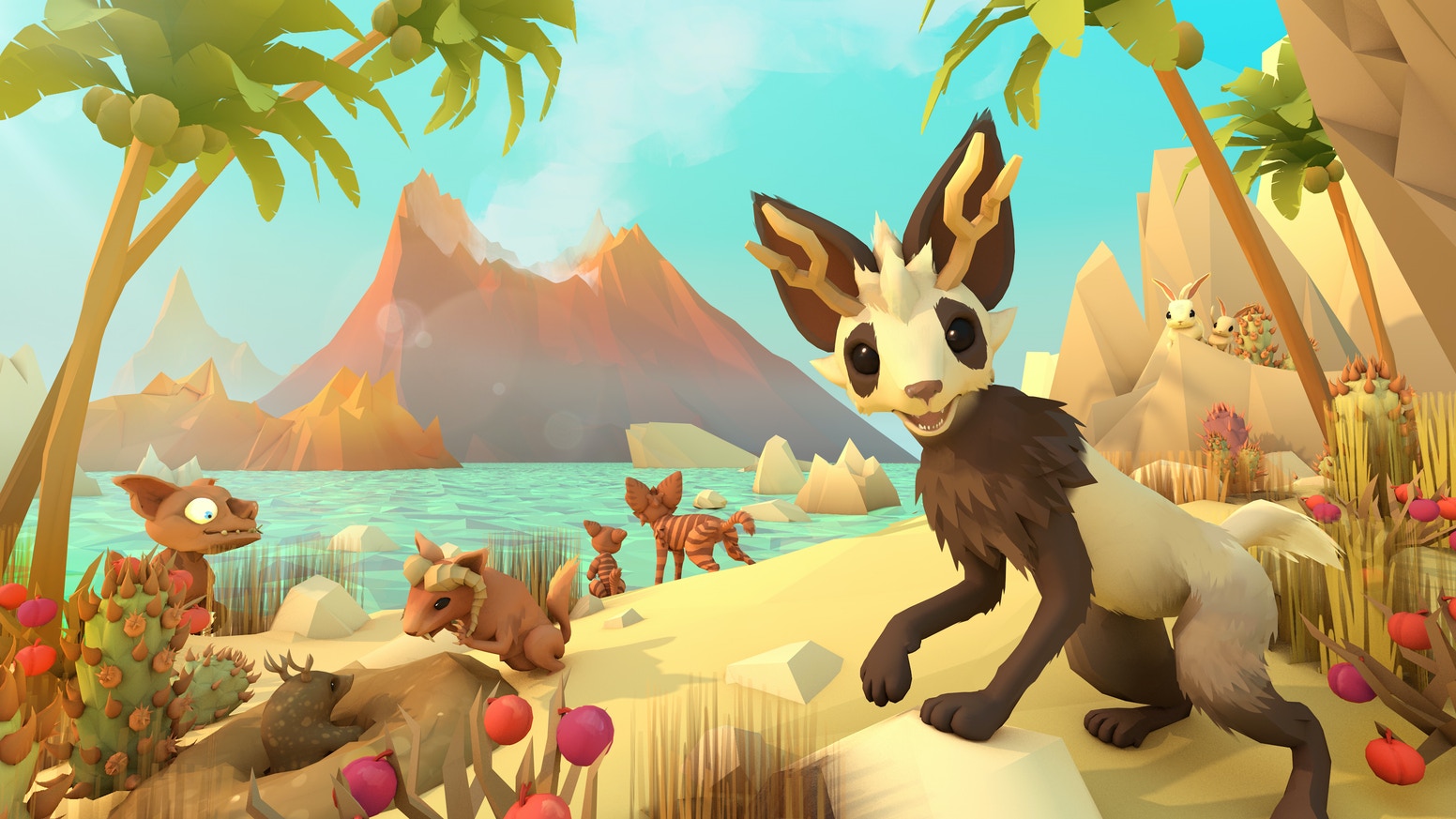 A game that expertly demonstrates population genetics and hereditary traits, Niche is a little too dry and repetitive at times. The Finger Guns Review.

During any given year, dozens of new species of animal are discovered around the globe. Whether it’s ancient species that have been able to stay out of human eyes for generations or species that have adapted to changes in their climate to overcome new challenges, nature is always changing. Conversely, tens of species join the endangered species list each year or become extinct in the wild. This is something that Niche – A Genetics Survival Game demonstrates expertly. Unfortunately, it sometimes forgets the fun on it’s journey to educate.

In Niche, you begin the game as a fictional fox/cat-like creature called Adam who’s grazing away one day when it’s picked up by a flying predator. Panicked, it struggles and the predator drops the fox-thing, but it’s no longer near it’s family. Out in the wild, the animal meets another of its kind, Eve, and they start a tribe together in order to survive, breed and adapt to the challenges they will face, generation after generation.

Niche is played out on hex grid locations that are linked to one another. It’s a turn based strategy game where each of your tribe of animals gets a number of action points per turn which represents a day in the life of an animal. Those action points can be used to move around the location or complete actions. For each new day, each member of the tribe will consume 1 of the available food total and age. Using the animals’ senses, which allow you to pinpoint points of interest in your vicinity, the aim of the game is to keep the species alive by adapting to your surroundings, gathering food and surviving hardships. The prime way to achieve that is breeding in order to give you a genetic advantage.

You see, each of the fox/cat-like species in Niche has their own genetic make up. Adam and Eve, the first 2 animals you control in the game, have a similar but slightly different DNA chain. This means that their offspring will share 50% of each of their traits with a real life dominant-recessive system in place. Their first offspring won’t be a Kronenberg creation but as you move from your starting island onto other locations, you’ll meet members of their species that have wildly different DNA. Different eyes, ears or noses that affect their senses. Wings to enable flight or webbed feet to make them better swimmers – sometimes on just one limb. Tails, patterns to their fur, horns, immunities to disease, spikes and their fertility levels are among a whole lot of factors that play into the genetic makeup of the offspring of your tribe. Offer them some food and they’ll join your party and from their, you can introduce their fresh gene’s into your existing pool.

You can also choose up to 2 mutations that can pass on to an offspring. Until a certain trait has been added to your gene pool, it’s locked but once you’ve met and inducted a new DNA type, mutations can be an excellent way to get the results you desire. Stuck on an island where all the food sources are in the water but none of your fox/cat/dog-things have webbed feet? Mutate an offspring to be your forager.

It’s the players job to choose which pair of animals to breed that will give the species the best chance at survival. Each new area the group heads too can offer new challenges – sometimes it’ll be food competitors which mean you’re best with animals that can collect the available resources. There’s predators which will attack unless you can fend them off with animals that have high Strength to deal out damage or camouflage to avoid their attention entirely. Diseases can run through your species unless you’ve built up immunities. Dry areas with droughts can catch fire and if you’re in its path, your family can perish. In the mountain’s snow will arrive and will provide its own challenges as food runs low and you need to find ways to boost your cold resistance.

There are 5 biomes in Niche that you’ll travel between, starting out nice and easy on grassy islands before the other areas like a jungle and dry savannah really ramp up the difficulty. This game is procedurally generated so each run will be different but you will always start off with 2 animals and in the grasslands. That doesn’t mean it will always be easy however. Because of the random nature of the game, it’s entirely possible to pull together a tribe with such low fertility among all the males or females that the species simply die of old age without being able to mate. I speak from experience here. Only so much of your species can travel between areas too, which can be both heartbreaking when you have to leave some of your favourites behind and useful when you need to rid yourself of some tribe members that aren’t able to pull their weight in that environment.

Niche also has some rogue-lite elements because when your species does die off, you can restart the game with the same bloodline. By doing so you keep the available mutations you’ve unlocked.

I’ve found the biggest issue with Niche is that it provides very few motivating factors to encourage the player to move forward during a run. When you’re in the grassland areas, it’s usually safe with peaceful animals and plenty of food sources. The only real reason you’d move on is to find a new animal to bring into your tribe to prevent inbreeding or everyone dying of old age. The first few hours with the game can be dry and repetitive and because you’ll start in the grasslands repeatedly, getting out of there to the more interesting sections can become a real chore at times.

The other issue I found with the story mode in particular was how loose and hard to follow some of the directions were. At one point, a pop up box appeared to say “There are new types of island to the North”. The only issue here is, there’s no compass in the game and no map of connectivity between lands. It feels like a big oversight not having one of both of these elements in Niche.

The journey from PC – where Niche has been available since 2016 – to Nintendo Switch has not been all that kind on this game either. The visuals are a little less punchy than the PC version and can look almost drap in places. It’s also very cumbersome to navigate. The right stick controls the zoom and angle of the camera while the left stick moves around the cursor hexagon. Moving this cursor is the only way to look around the environment and it feels far too slow and awkward. Some shortcuts have been added – tapping the shoulder buttons moves the view and control between any creatures who still have available activity points – but they don’t negate how ungainly it can feel to play. Then there’s the text size; played docked on a TV and the text is a manageable size but in handheld mode, the text can be a little on the small size.

Even with these few niggles though, ‘Niche – a genetics survival game’ is worth a look on the Switch for anyone who enjoyed Spore or Creatures. It can be boring at times but it’s worth pushing through those moments for the tension when you’re hiding in the long grass avoiding predators while still trying to gather enough food to keep your species alive.

While it’s far clunkier than it’s PC counterpart, Niche on the Switch is still an interesting strategy game that uses population genetics as a core gameplay loop to both entertain and inform. It has its issues but it’s weapons grade cute and anyone who enjoyed Spore will get something out of this.