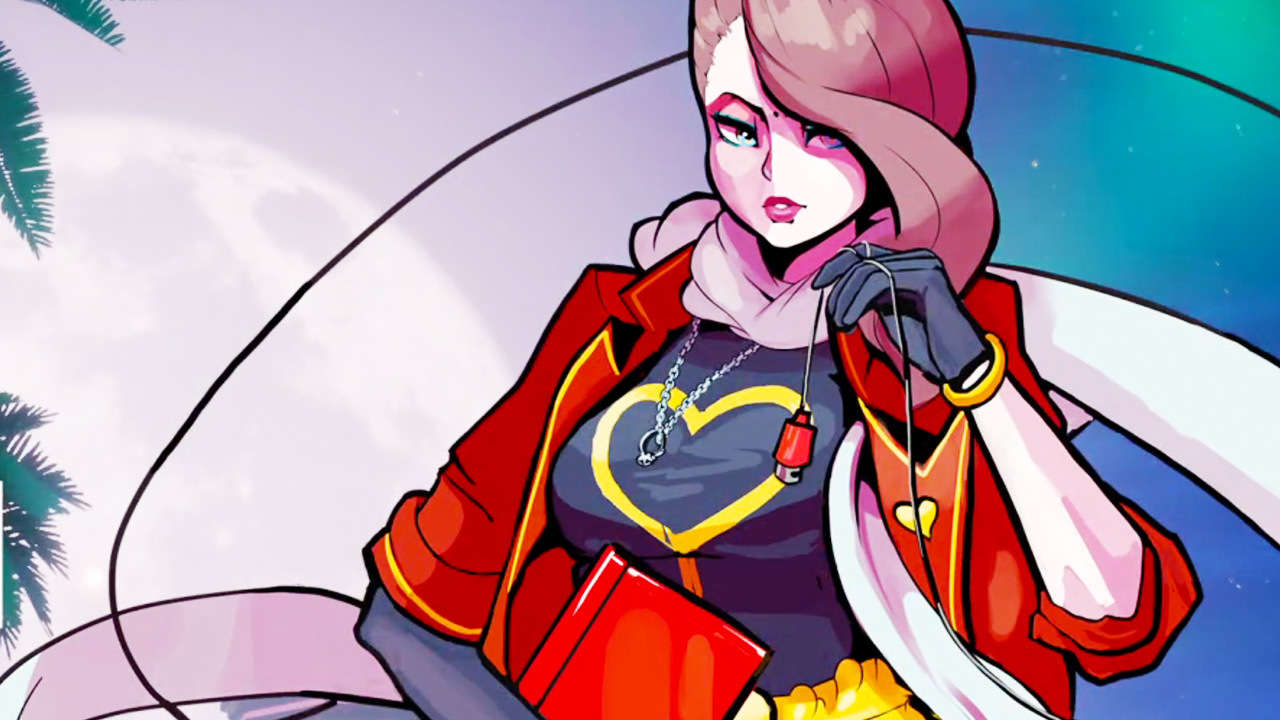 What’s that you ask? What if Sherlock Holmes, but anime? Let’s find out in The Finger Guns review of Paradise Killer.

Imagine a tropical island. Blue skies. Sandy beaches. Vibrant colourful plant life. Interesting and charming residents. Chill vibe. Now, imagine that island has actually been destroyed and rebuilt 24 times in the constant pursuit of perfection, and contains a number of dark and seedy secrets lying just underneath that idyllic facade. Welcome to Paradise Island, the setting for Paradise Killer – the latest and perhaps most unique entry into the investigation genre populated by the likes of the Phoenix Wright and Sherlock Holmes series.

A first-person open-world game that’s heavy on dialogue, Paradise Killer sees you take on the role of Lady Love Dies, an investigator exiled for her inadvertent role in the destruction of Island 13. Some three million days later, she has been called out of her enforced retirement to investigate the murder of the entire Council of the Syndicate, the alien-god worshippers seeking to create the perfect island, who just happen to have been slaughtered mere days before Island 24 is destroyed and replaced with Island 25. Upon completion of your investigation, you present your evidence at the game’s final event – a trial to convict who you believe to be the murderer.

Just in case it wasn’t obvious from those opening paragraphs, Paradise Killer isn’t a dour, wrought Murdered: Soul Suspect-type affair. Hell, that much is clear from the game’s opening seconds – the splash screen alone evokes a hazy, summery feel that you normally wouldn’t expect from a game in which you’re investigating a mass murder.

That carries over into the game itself, which might as well be a Dreamcast-era Sega game, given its aesthetic. And let me make clear – that is a very good thing. Blocky, colourful and varied environments and blue sky boxes are married with a terrific soundtrack – a heady mix of city pop, jazz fusion and dance pop to create something which manages to sound current, whilst also evoking more than a hint of the Japanese giant in their 80s and 90s arcade pomp.

Of course, a game is more than its aesthetic, and the gameplay is where things get a little murkier for Paradise Killer.

The game’s first-person controls, used to navigate around the island, are competent enough. As an open-world exploration and investigation game, you’re free to go wherever you please around the majority of the island, aided by a sprint button, a jump button and an Augmented Reality (AR) button, with which you can see where each of the characters you need to interrogate can be found. Most of the game’s collectables, including the Blood Crystals that serve as the in-game currency, are within easy reach, but some require a little more thought and precision, and the controls don’t always feel responsive enough to make getting them as easy as it should be.

There are also parts of the island that can only be accessed by completing puzzles via your trusty laptop-slash-personal assistant, Starlight. Thankfully, these puzzles fall on the more simple side of the spectrum, so you’re unlikely to get too frustrated with them.

However, unlocking new parts of the island isn’t Starlight’s main purpose, nor yours, and this leads to the main thrust of the game – namely the investigation of the murders. As you begin to converse with the island’s residents, Starlight acts as your repository for clues, points of interest, links, alibis and the like, giving you a one-stop shop for piecing together the picture of what actually led to the murder of the Council. Starlight’s menus are very easy to navigate and the information portrayed within is clear and easy to follow, highlighting new and unread text with an exclamation mark, as well as putting character thumbnails next to that text, so you can handily remember who said what about whom. It’s an intuitive system, which is a big help, as the amount of information you’ll gather is dense.

And this brings us to the game’s other core investigation element – the characters themselves and the dialogue. As you might expect from a game set on the 24th iteration of a tropical island designed for the worship of alien gods, Paradise Killer’s motley crew is full of truly unique and bizarre characters.

Be it Shinji, a crazy blue demon who acts as your pseudo-guide throughout the game, or religious zealot The Witness To The End, or even the flirtatious but suspiciously evasive chief medical officer, Doctor Doom Jazz, Island 24’s ensemble are certainly memorable, thanks in no small part to their character design, which has a heavy anime influence. Each of them also has a small number of audio cues that imbues them with a little more personality, given the bulk of the dialogue in the game is delivered via text. Whilst they can be a little repetitive after a while, they still act as a welcome respite from the barrage of dialogue on-screen (although, if I’m being honest, the little teleprompter-style clicking noise that accompanies the text is like ASMR to me).

The one thing that the vast majority of characters you’ll encounter is that they hold Lady Love Dies in disdain for her role in the destruction of Island 13. This means you’ll have to work that much harder to get useful information out of them, sometimes through perseverance, sometimes through charm and sometimes through shameless arse-kissing, which really sucks with some of the game’s more unlikeable residents!

The dialogue is, on the whole, pretty good. The more serious bits of it can feel a little forced and a little too serious from time to time, but – for the most part – it’s sharp and witty, and even features some subtle fourth wall breaking on occasion.

Having said that, it’s just as well that it’s often snappy, as the game’s main issue is one inherent to this kind of game. Namely that one single question will often lead to an answer that opens up about four other questions. Unfortunately, those questions likely need answers from characters other than the one you’re talking to. This means that you’re going to have to indulge in more than your fair share of schlepping to and from one place to another and back again. You can use the in-game currency to unlock fast travel points around the map, but that doesn’t speed things up quite as much as I had hoped it would and, unfortunately, means that the middle section of the game drags a bit – although not enough to detract from an overall fun time.

A bright and breezy game that unfortunately drags a little at points, Paradise Killer is nevertheless an enjoyable jaunt that does something a little different with a genre that has a reputation for being somewhat dour. Absolutely worth your time – just be prepared to dedicate a little more of it than you might expect in the early stages.