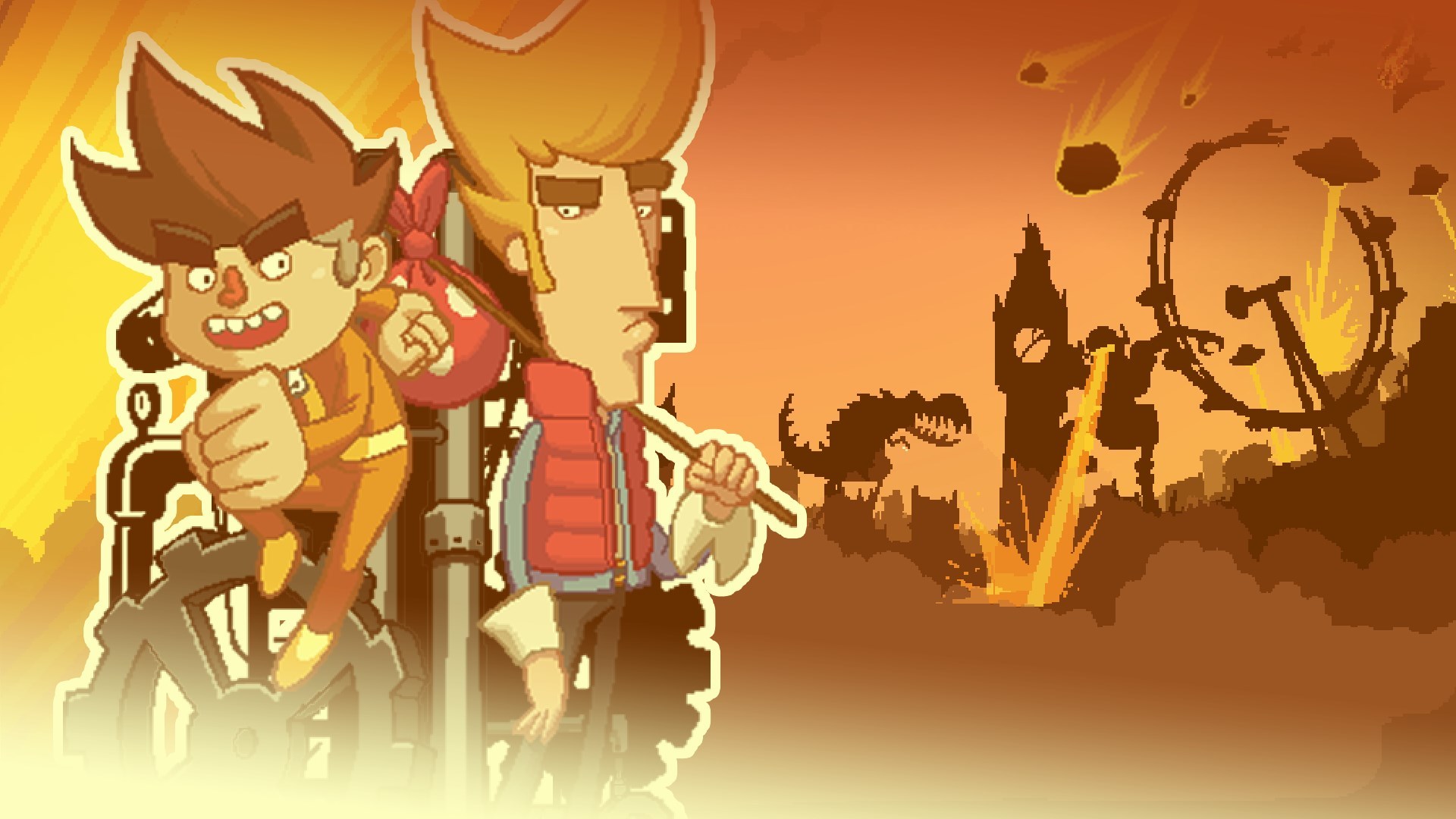 A hilarious, poignant and insightful combination of point and click and “indie darling” platformer, Lair of The Clockwork God is an essential title. The Finger Guns Review.

Some things work really well together. Strawberries and cream. Torvill and Dean. A pint of shandy and a warm summer evening. But if there’s 2 things I never expected to work together, it would be a point and click adventure and a traditional 2D platformer. A quick Google search says these 2 genres have stayed well away from one another. Sure, elements of both have slipped into one another – this is 2020 and no game can be just one thing without crafting and levelling up or something – but there’s never been a pure merger of the 2 genres. That was until co-writer Ben Ward and creator Dan Marshall of Size Five Games tossed them into a Fly transporter and turned it on, resulting in the glorious mutation ‘Lair of the Clockwork God’ which launched on Steam this February and is now heading to consoles. And ruddy hell it’s glorious fun and stitch inducingly hilarious.

Lair of the Clockwork God is a kind-of-but-not-really sequel to the pair’s previous point-and-click adventures ‘Ben There, Dan That’ and ‘Time Gentlemen, Please’. If you’ve not experienced Ben and Dan’s unique brand of humour before, don’t worry; you don’t need to have played any of the previous games to enjoy this one. I think the game references the other games twice in total. The only thing you really need to know is that Ben & Dan, the childhood friends and designers of this game, are the characters Ben & Dan in the game.

This time Ben and Dan are kind of at odds with one another. While Ben is sticking to their point-and-click roots, Dan has decided he’s now into “indie darling platformers”. Ben is still living it large in the heyday of LucasArts, able to “Look at…”, “Talk To…” and “Use Inventory” etc while Dan has decided that running, jumping and pushing crates in order to obtain some symbolic yet emotionally impactful goal is the way to go in modern day gaming. The abilities of both characters form the main loop for Lair of the Clockwork God. Dan, determined not to point and/or click, won’t pick up items unless they’re collectables. Because what’s a platformer without random collectables, right? Ben, determined not to become a platformer, won’t run or jump. He absolutely refuses, no matter what danger he finds himself in. You didn’t ever see Guybrush Threepwood sprinting around so Ben won’t either.

Combining their polar opposite abilities to overcome obstacles is the central theme of Lair of the Clockwork God. With a click of a button, you can switch control of the characters  Dan carries Ben between puzzles and leaping over dangers in order to open new paths forward. Ben combines crafts items in order to grant Dan new abilities or interacts with the world in order to solve puzzles. At times, the pair are separated. While the actions of one always assist the other’s progress, it’s during these sections where the game is designed to both accentuate the best parts of both genres while taking a cheeky pop at their weaknesses. This means that while playing as either character alone, it’s hard not to miss their partner. As someone who wasn’t sold on the combination of genres on paper, it’s astonishing when you see it combined. It’s an incredibly smart, insightful and miraculously cohesive combination of the genres that shouldn’t work but really, really does.

What’s so impressive about the mechanics and systems on display here is how despite this being a hybrid game that parodies a lot of the greats from both genres, within an hour of play you’re already playing with mechanics that most games build towards as their unique selling point. An example – That gravity flipping mechanic introduced half-way through Celeste? It’s literally in the first non-tutorial level in Lair of the Clockwork God and is used liberally throughout. The point-and-click aspect is incredibly deep too. The solutions often fly in the face of the classical genre tropes (you’ll be reusing items here in really on the nose ways) but the formula is the same. What’s really impressive about this is how the game avoids a lot of stock answers. You don’t get many “Huh. This won’t work”. Instead, it’s very specific. This isn’t just a combination of two genres, it’s a merger of the best both have to offer.

The strength of the mechanics and design are complemented by the real stars of Lair of the Clockwork God – the narrative and raillery between Ben & Den. Having arrived in London after finding a flower that can cure cancer, the 2 “heroes” find the capital currently undergoing numerous simulations apocalypses. “Each time we come here it gets worse” is a line I’ve never felt more affinity towards. The pair take refuge in a shed which leads down to a bunker where they meet “The Clockwork God”. This friendly AI needs to better understand humanity so puts Ben and Dan through a series of VR constructs while collating and collecting their emotional responses. Cue a series of parodical levels each centred around a particular feeling.

The chatter between Ben and Dan, and the tone employed by Ben as he “Looks at…” the world and his inventory is genuinely rib tickling throughout. I don’t want to ruin the jokes because they’re best experienced first hand. Instead, here’s a list of what you can expect; self deprecating humour that paint the lead pair as the butt of the jokes, slapstick humour, excessive gore for comedies sake, parody takes on classic and highly regarded games, both low and high brow gags, well timed and prolific profanity, sarcasm, a lighthearted yet sometimes self aware and scathing take on the gaming industry at large and an irreverent take on how serious both point-and-click and arty indie platformers take themselves. The 4th wall simply doesn’t exist here and the whole of this game feels like a 3 way conversation between the player, Ben and Dan. Here’s the proof in the pudding – I’ve played this game twice and I’ve not once resorted to bashing buttons to skip dialogue like I so often do. I played Lair of the Clockwork God when it launched on PC earlier in the year and I laughed a lot – on this second playthrough, I’ve caught a whole lot of lines I missed the first time around. I’ve literally had a stitch because of laughter a few times.

While Lair of the Clockwork God is like a mini-gun loaded with laughs, when it’s aiming to be, it can be touching and poignant. There’s some brilliant juxtaposition between the gags and the moments when it wants to get serious. As you’d expect, those moments are done in a very “Ben and Dan” way and lead to an even better pay off later.

Now that I’ve waxed lyrical about Lair of the Clockwork God, I need to mention its biggest flaw – there’s a bug that popped up in the PC version that still remains in the console version. If Dan jumps on top of Ben he will briefly clip into the games floor. This is hardly game breaking but still needs mentioning.

So Lair of the Clockwork God isn’t perfect – but no game is. This is however one of the easiest recommendations I’ve ever been able to make in my 11 years as a ‘critic’. If you’re a 30/40-something who misspent their youth verbally sparring with the sword master or hitting the road with the Freelance Police, half of this game will be right in your wheelhouse. If you’re more accustomed to bouncing on the head of side scrolling enemies and sometimes thinking twice about the symbolism that the latest artistic indie platformer is attempting to induce, the other half of the game is designed just for you. Enjoy both point-and-click adventures and indie darling platformers? With Lair of the Clockwork God you get the best of both worlds wrapped up in a package that’s genuinely funny – not just “raise a smile funny” but actually chuckle out loud funny – and enormously self aware. Playing Lair of the Clockwork God on the Nintendo Switch was like walking into a pub and pulling up a stool at a table with old friends who are 4 pints deep and about to regale you with the very best story. In a real world where a trip to the pub with your friends involves perspex screens and facemasks, I couldn’t have asked for anything more.

A cohesive and complementary blend of point-and-click adventure and 2D platformer, Lair of the Clockwork God is a real rib tickler that’s capable of delivering real emotion when it aims to. This is Ben & Dan’s magnum opus and one of the most essential games of 2020.

Lair of the Clockwork God is available now on Xbox One, Nintendo Switch (review platform) and PC.